Fame and Fortune, He Seeks None. 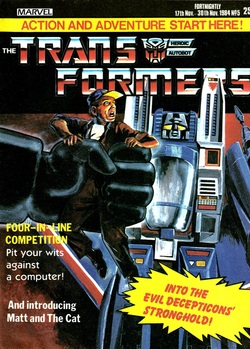 “We must return to the Ark immediately to refuel!”
“The Ark? It's not going to rain or anything?”


A hugely important and exciting issue for one fairly obvious reason. Yes, it's the first issue to have been published over my birthday of the 17th of November! Yay! I became three when this came up and probably spent the day giggling incoherently and smearing my face with food. So no change there then.

In the context of the comic itself though, this is the beginning of the Big Marvel Crossover. Pretty much (bar some use of the Savage Land to explain the Dinobots) the only one the American comic would ever do. Last week I was surprised to see Spider-Man's presence not get more heavily promoted in the “Next Issue” box, but that actually makes sense here. Because of the original issue being split in half Peter Parker and his alter ego are only in two pages at the very end. Of course, that probably wouldn't have stopped many comic companies making a big deal of his presence so that suggests; along with an editorial telling readers not to splash out on first class stamps for their competition entries; a nice public spirited attitude behind the title.

What's also surprising is that the character who'll become Spider-Man's wacky odd couple team up partner, Gears, only gets one line. Which means I'll have to save the reams and reams I was planning to write about him for the next instalment. 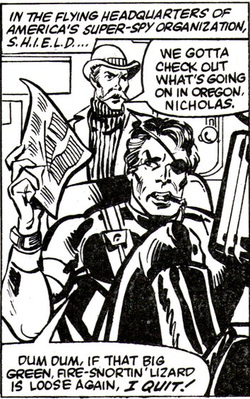 Nick Fury: Cooler than Spider-Man.
On the plus side we do get Nick Fury (in David Hasselhoff mode rather than Samuel L. Jackson and making what's possibly the most obscure Marvel reference ever by talking about a comic where he fought Godzilla), Dum Dum Dugan (who you may remember was played by Lieutenant Hawk from Star Trek: The One With The Borg in the Captain America movie) and new Daily Bugle editor Joe Robertson (he's probably in one of the Rami films somewhere). None of whom do very much though.

The use of the Marvel characters in general and Spider-Man in particular is something that Hasbro initially objected to, mainly because Spider-Man toys were made by a competitor. Him appearing in the black costume here after he'd already abandoned it in his own books (though the original note clarifying this is set before that happened has been left out by the UK team, based on the advert for the 25p British Spider-Man comic this fair isle may not have got as far as the back costume yet) was a concession to this as there were no toys yet of this version.

Hasbro's desire not to do crossovers has over the years come in for some mockery, both from fans and from Budiansky. Why on Earth wouldn't they want the biggest selling comic book character of the era to show up and give sales a massive push? Ignoring the business reasons though, it's actually a sound stance to take. The book already has 30 odd main characters plus assorted humans, most of whom haven't had chance to speak after their introductory speech. Trying to find room for all and a plot is hard enough as it is without having to bring Spider-Man in and find something for him to do as well.

Whilst it's almost certainly true his presence gave an already successful book exactly the right boost it needed to get commissioned as an ongoing series, it does mean we once again have to sacrifice the plot as the next issue will see him and Gears go on their own little mini-adventure (on the plus side though, this makes placing various UK stories much easier than it otherwise would have been as most of the Autobots are effectively relegated to the sidelines by this and could be off doing all sorts of things). 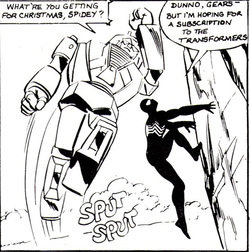 Gears and Spidey advertise subscriptions.
The non Spider-Man related frolics in this first half though are at least related to the main plot, even if it is being spread a bit thin by this point. The kidnapped Sparkplug is forced by Megatron to start making some fuel for the Decepticons, the Autobots regroup back at the Ark and Megs decides to go fuck with the US armed forces hanging around outside his new base by blowing up their G.I. Joe toys. We also get our first really weak faux cliffhanger of the series, as the splitting of the original American issue sees the instalment end right in the middle of a bit of action involving Skywarp. It's a shame they were so rigid about splitting it exactly in half as the previous page ending on the first appearance of Spider-Man would have actually made for a better cliffhanger.

Continuing the trend started last issue we also get some more in the series of “Unlikely comedy responses from humans confronted by giant alien robots”. My favourite of which is a bizarre “Sarge always said if you put in enough miles, you'll believe a car can talk!' reaction from a motorcycle cop. That's some serious denial going on there.

And a good few years before Jose Delbo will arrive on the book and make an art (ha ha) of it we have our first ever “Transformer standing in the background who shouldn't be there” as Shockwave is hanging about in the Decepticon base. Ironically just after Ratchet has dropped the first seed of the plot-line that will introduce him in three issues time. Actually, even though he doesn't get given chance to get very far into his speech about what he found in the Ark computer, Ratchet's line feeding a future story suggests this was around the point they knew the the American comic would be going beyond the initial mini-series. So maybe Spider-Man didn't make all that much difference after all?

Sadly there's no A-Team competition this week, but we do get a new short comedy strip that's clearly so well thought of by the editor it gets heavily promoted by the cover- Matt and the Cat. The mere mention of the name of this strip is enough to make fans who've read it start clawing at their faces and screaming “My eyes! My eyes!” but this is the first one I've ever read properly and it's... OK. Mainly because it's based entirely around a joke about putting a cat out for the night from the top flat in a tower block which I can relate too (I do not however, chuck my cat out the window and anyone who says otherwise is a liar).

Speaking of comedy though, there's a tiny little robot based cartoon on the Openers page that looks like it's the work of Lew Stringer (it's unattributed and the signature doesn't look quite right, but it is in his style and feels proto-Robo Capers), who will go on to be the king of this sort of think for the book and will create Greatest Ever Marvel UK Character Combat Colin. If it is him, that means, as he's still going to be there on issue #332, he had the longest span of service on the title.

Other than that (if we accept right off the bat Robot Round Up is dull and Machine Man's main special power is the big metal cock in the middle of his forehead) there's one other thing of special interest in the rest of the issue. A letter (from Arfan Hanif of Stoke on Trent- Hello Arfan if you read this after googling yourself, unlike Patrick Goddard you're OK- asking about an Annual that is the first conformation we'll be getting one in 1985. He also asks about whether anyone has thought about making a Transformers cartoon, which shows how behind we were on that score in the UK and why the comic was so quickly able to establish itself as the dominant media for the franchise in this country. The editor promises the show will come to Britain soon, leading to years of “So why is this different in the series?” letters. The film Arfan also asks about is going to be a little longer in coming though... 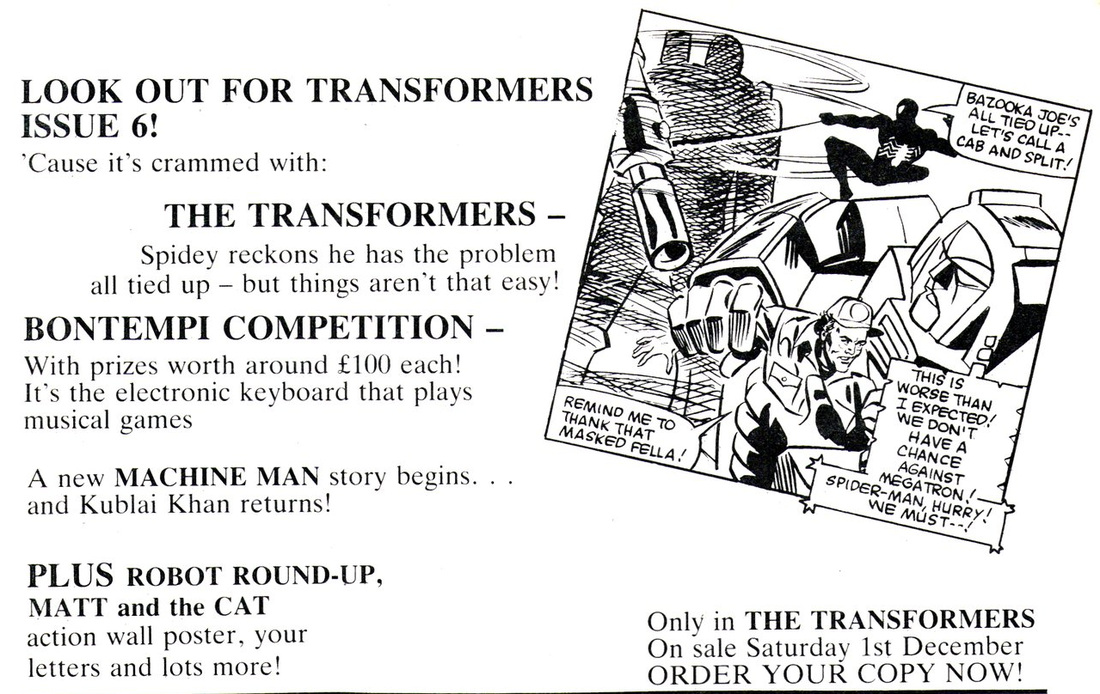