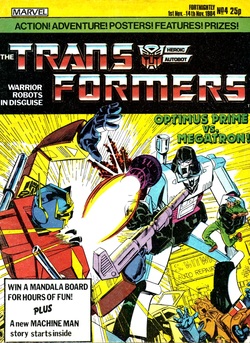 
I'm sure my insurance doesn't cover this!


Around 1990 I was able to pick up from a charity shop the first Complete Works book. I'll talk more about this series with the misnomer title when I get round to doing the 1986 specials, but this annual styled hardback was for many years my first and only encounter with the earliest issues. Meaning I never discovered how the exciting cliffhanger to this instalment was resolved for the over a decade until the Titan trade came out. That's a hell of a long time to be left hanging, even with synopses in the “Story so far” sections of the Annuals and that new fangled internet thing at least gave a rough overview of events.

One nice thing about these early American issues is how neatly they split into two halves, in this case last issue opened with a big action scene and this one closes with one. Whilst the raid on the nuclear power plant felt like gratuitous padding (even if it does allow the début here of the Decepticon base built from what they stole that will serve on and off for 200 odd issues) the fight outside Sparkplug's garage is properly integrated into the plot.

Yes it is a bit daft that only this one human- who hasn't actually done anything helpful yet- can turn petrol into a fuel for the Transformers but the scrap to grab Sparkplug is still very nicely done. There is a good chunk of characters telling us they're using their special weapons but there's at least a pace and energy to the thing. We also get a rather fun one on one fight between Megatron and Prime where they get to do the full on super hero/villain banter thing.

Bumblebee with toy head, unlike the cover.
The problem is the plot does go for a Burton again, effectively the only thing of any real note to happen here is Starscream successfully grabs Sparkplug and the Decepticons run off. What we do get as a result though, if we allow for the Ark crash being a no score draw, is the first out and out Autobot defeat of the series. Things are going to be a lot tougher for our comic heroes than their TV counterparts over the next decade, and this is the first real sign of that before the big one in four issues time. The Autobots collapsed and desperate for fuel is a fantastically bleak ending, and one that left me deeply annoyed that there wasn't a Complete Works Volume 2 (to show how little I knew at the time there actually was such a book, but it doesn't seem to have been the fixture in charity shops the first and the regular Annuals were for the '90's).

Perhaps most importantly though, we also get the first full on “I need a vacation!” comedy human reactions to the giant killer robots causing mass destruction and death around them. Far too many for any sane mind to cope with in fact. These “I don't think we've got cells big enough to hold these boys!” moments are going to become a staple of the series and will seemingly be based on the Little Britain principle that if you repeat a joke enough it will eventually become funny. We shall see how well that works across the years.

What's funnier than any of the intended humour is that Bumblbee on the cover is in his now more familiar final character design, meaning all the kids reading the comic must have been left wondering who the hell that is supposed to be as he's not actually had that head in the strip itself yet (cover Bumblebee being orange doesn't help on that score). That's our first reuse of an American cover as well, and it has to be said it's a tad underwhelming compared to the good work the UK artists have done to date. 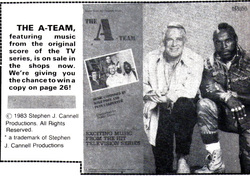 In 1972...
In the rest of the issue we get the single most '80's thing ever, a competition to win The A-Team soundtrack. Damn, I wish I could go back and enter that now.

The increasingly dull Robot Round-up feature is getting somewhat desperate by this point, repeating a story from the editorial of issue 2 about a build a robot competition run by BP (sadly not to make one too clean up oil leaks) and filling in readers on amazingly up to date stuff such as the plot of 1956 film Forbidden Planet. It's going to be interesting to see how many more issues they can pad out two pages on the subject of real robots before it eventually gets dropped to make way for something less boring. Of which there's plenty to chose from.

Though the suggestion as to why a crazy bearded man would build a female robot called “Ann Droid” (yes, two decades before Doctor Who did it) conveys a bit too much information for my liking. She can flutter her eyelids and kiss. But doesn't do the ironing. 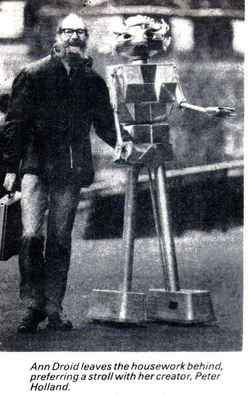 Makes Arcee Look Progressive. Love the sexist caption as well.
We also get a brand new Machine Man story with the fantastically pretentious title of Where Walk the Gods!. In which he carries on being an immense cock to all and sundry.

More interesting than his adventures is the bizarre writing the original owner of the comic has put across the top of one of the pages: 1978 1984 May 25 84 18. What on Earth is all that about? Some sort of super Da Vinci Code super cryptic clue to great and mysterious secrets? A sign the kid was Dustin Hoffman in Rain Man? Or is it just completely random? It'll be keeping me awake tonight I'm telling you.

Still, despite the second letter in only four issues slagging off Machine Man someone must have liked him as the Next Issue! Box is almost entirely given over to the continuation of his great new adventure of saving people and then being rude to them. In fairness, and in a sign of how UK material is soon going to become vital, issue 3 of the American comic was only published at the start of October. Or about a month before this came out, with deadlines being what they are there's a good chance Marvel UK simply didn't have anything from the next instalment to put in the box. Though it's bizarre the brief mention of the main strip is so coy about calling Spider-Man by name. You'd have thought they'd have been shouting that out from the rooftops. 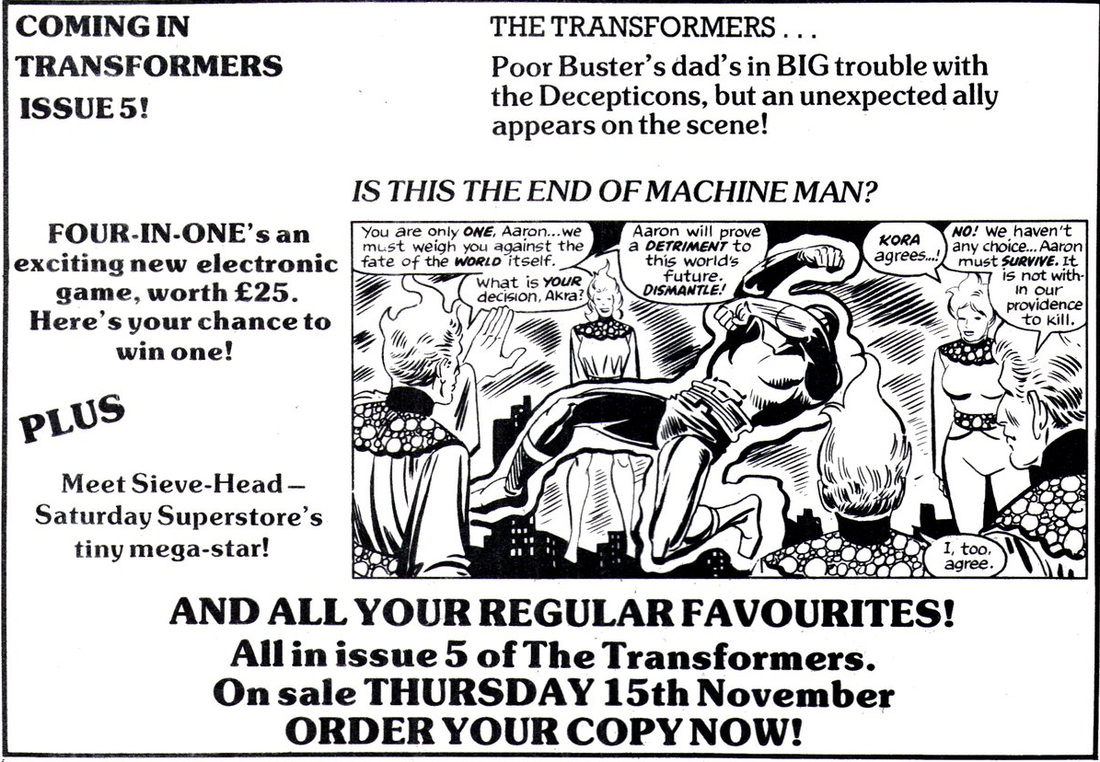