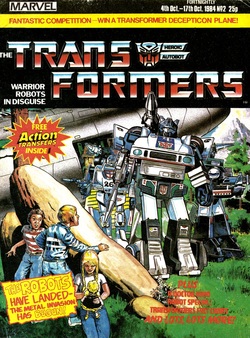 “But what was that giant screen? What were they all doing assembled before it?”
“Probably some kind of religious ritual Hound!”


As I sit down to begin writing this (on the 24th of May) it's only been a few hours since the 2012 Olympic Torch went cheerfully past my window. Which, as I work nights, was somewhat annoying as it woke me up. Though the pub over the road is doing such good business that they're planning to have the torch go past every week now. So it's rather fitting that this week's issue is, in a tortuous analogy, the one where our robot heroes step up to the podium for the first time and reveal their amazing special skills that would surely get each of them a gold if projecting a hologram or talking a blue streak were Olympic sports.

Last week I noted that the first American issue is the most widely read and reprinted Transformers comic of all time, and whilst that is true the British comic's presentation of the second half is a little different. Because whilst the first issue was FULL COLOUR here, and up until the point the title goes weekly, we get a good chunk of pages in black and white. And of all the UK issues, though they still fetch decent money due to being early and having a smaller print run than the title at the peak of its pomp, it's the ones containing none full colour American issues that tend to get the least attention.

And that's understandable, it's easier to get hold of the American original which has the whole 22 pages and pweety colours. And issue #2 is doubly cursed as being the only such UK issue to leave out pages from the original US one. Well, sort of, as we'll see... Sitting down to do this was actually the first time I've ever read a fortnightly issue with US content, and there was some surprises in there for me.

Exciting Typhoo promotion from the editorial.
First up, is exactly how little colour there is. Only two pages of the main strip are in colour. You're left with the vague annoyance at the fact the adverts and back up strips actually get more. But, it has to be said that this is actually to the betterment of the art. “Colorist” Nel Yomotov was the only person to work on the entire American series, and, whilst he gets some leeway in these early issues as all the art is basically a work in progress, he was never a man to be all that bothered about getting the colours right. Or even using more than one on an entire page. Or, at times, staying within the lines.

Without it, the art actually looks very nice and crisp. The various character changes are a bit more obvious (ladies and gentlemen I think we get the first ever instance of that recurring oddity of Soundwave with a mouth as he and Megatron wake up, something previously hard to make out under the blotchy colouring) but it looks much much better than it does on the two colour pages. A distinct improvement.

The other is that the story isn't titled. It will soon become standard to paste a [Title] Part 2 card onto the top of the second half of a US reprint complete with credits. But here all we get is the recap border (with some nice toy based Prime art) and the Transformers logo. Which has fiendishly buggered up my plan to include the title card on each entry in this blog. It's only a small thing, but the later additions to the odd numbered US reprints will do a lot to make them feel like a story in their own right rather than something hacked up into pieces.

Plot wise, the pace continues to be extremely fast. Despite the fact that three pages are given over to the characters introducing themselves. Well, that is to say, three pages in the original US issue. Here, the double page spread of all the Autobots saying hi has been removed. For a very long time, when guides on the internet were made from an issue without the free gifts, it was assumed it was missing entirely, but it's recently turned out it was actually turned into a poster in the middle of the issue (I actually have two copies in my collection, one without the poster and one with but in generally poorer condition).

Having it out of context means that not only does it get to be in colour, but there is no in fiction crew list firmly pegging which Autobots were on board the Ark. With work already underway to do original British strips but no firm confirmation yet that the American series would be continuing this would, in theory, allow the UK comic to introduce any and all new Autobot toys with a minimum of fuss (though in practice, once the American series did go monthly there would only be a little and half hearted bit of this before Bob Budiansky had to take the brunt of character introductions). I suspect if not for the fact the page introducing the Decepticons contains more than the one easily covered up by a Transformers logo plot panel they'd have probably done the same with that.

What the couple of lines each character, be it in the story or poster, gets does show is this is very much a Marvel developed book, not just an already created toy tie in they've brought the rights to. With Transformers being so new Budiansky (who though not writing at this stage basically developed the entire franchise) fell back upon standard super hero troops. Virtually every Autobot and Decepticon has a special power of some sort, holograms, stealth, the ability to create earthquakes... Even if it's something as simple as a special type of gun they're effectively a rouge X-Men team. Especially Windcharger who is essentially Magneto and thus the most insanely dangerous yet poorly used weapon the Autobots have. Most of them will never really get a chance to use their skills more than once or twice and this habit will fall off into the second wave of toys, but with the characters being presented this way the forthcoming Spider-Man crossover will wind up feeling more natural than it would have at any later point in the series.

The rest of the issue is given over to introducing our human identification character, Buster Witwicky, and his supporting cast, of whom only his dad Sparkplug will make much of an impact. Which considering the other two include his super fat friend “O” and insanely hot but completely vacant girlfriend Jesse (who makes Dark of the Moon's Carly look like a feminist icon) this is a good thing. Whilst Buster is a little wet Sparkplug is actually good fun despite beginning a long tradition of humans with silly names in Transformers comics. It's a shame both characters will eventually be given a poor exit by the need to introduce Spike and have him be the main human focus because he's part of a very expensive toy.

Saturday Night At The Movies.
The way of having Buster come into contact with the Transformer war is via a fight at a drive-in cinema. Where we get the first of many, many comedy scenes where the Autobots are confused by human culture. It's the sort of thing that gets old real fast but does have a certain charm to it here as it's the first time it's been done and actually has a bit more bite to it than usual as the Autobots learn about carbon based life for the first time. Though why Buster wants to make out with Jesse whilst O is watching them from the back seat is something best not thought about.

The issue ends with our first proper cliffhanger (as opposed to “That's eleven pages... cut it now!”) as a damaged Bumblebee is bleeding to death in Sparkplug's garage. It's actually strangely affecting, he's not had chance to do much but the writers have taken care to make sure Bumblebee was chipper and enthusiastic so that we actually care for him, very neatly done.

Two thoughts on the rest of the issue. This is actually the first time I've ever read any of the original Machine Man (though the 21st century set mini-series is something I know from later in the titles run), and boy is he a dick. People keep trying to be nice to him and include him in their social activities and all he can do in return is go on about how much humans suck. He deserved being put in a box for thirty years.

The second is we welcome John Ridgeway, who will shortly become very important, on board with the cover art. It's completely unrelated to the issue itself, but with it's rural setting and small children there's a hint that work on Man of Iron was already underway and Ridgeway had it on the brain. Though the girl with the teddy bear is worryingly prescient of one of the very worst American stories we've got to look forward too a long way down the line.

The real puzzler though is how Marvel managed to put out a SAS Annual that year. Not only does it look odd in the advert next to the adventures of Knight Rider and WHAM aren't they supposed to be all super secret? 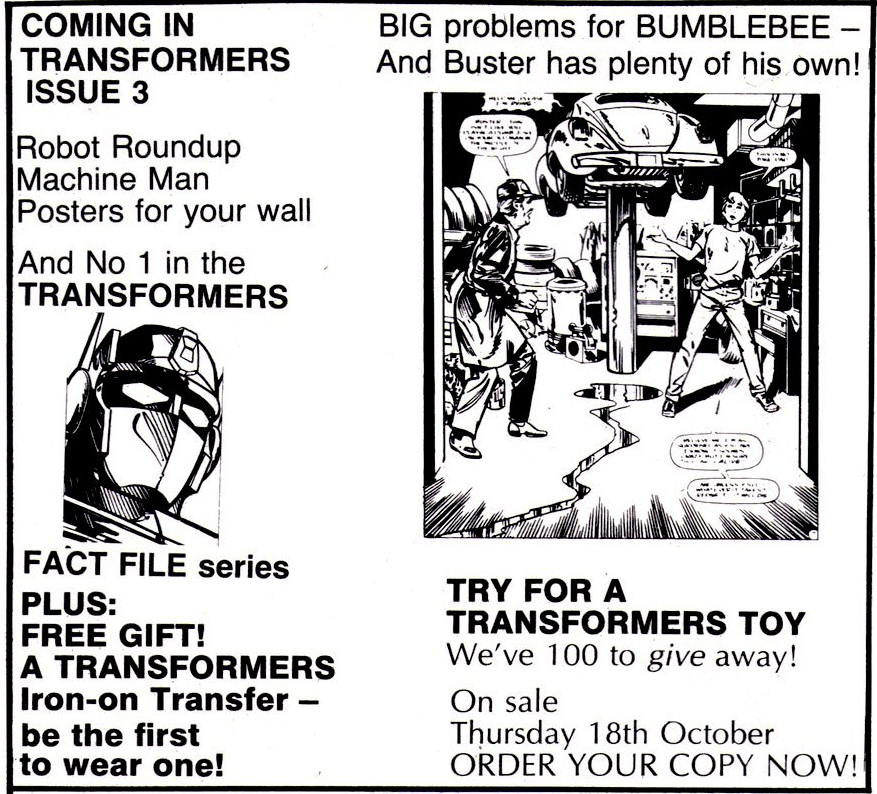