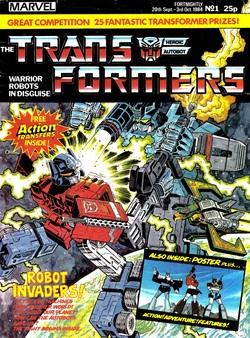 
Strangely enough the least interesting thing in this first issue is the comic itself. Containing the first 11 pages of the first American issue, it's the single most reprinted of everything Marvel did, the one anyone with even the most basic knowledge of the original comics would have read. Marvel UK alone reprinted it twice, plus two from Marvel US and multiple reiterations from Titan, IDW and even Hasbro themselves when they bunged a copy in with a reissue of the original Optimus Prime toy.

Coupled with the fact that, as the first issue, it tends to get a lot of attention anyway there's very few points to make that haven't been repeated many times. The character designs are all over the place, the dialogue is frequently strained and forced (though in fairness some of that's down to us now being more used to Transformers that talk like us rather than “aliens”, that's something we'll discuss more when we get to Man of Iron) and the idea of a war throwing a planet of of orbit is something of a silly one.

But what really stands out is the pace of the thing. Within just these 11 pages we get the potted history of Cybertron and its inhabitants (the first time this had ever been done no less), the introduction of the two main characters and a couple of the supporting cast, a planetary emergency, the launching of the Ark, a sneak attack, crash landing, four million year sleep and the beginning of the revival process. And that's only half of the first issue, or to put it in some sort of context, the entire 44 pages of Dreamwave's first two Armada issues covers roughly the same story in four times the length. Compared to something like IDW's Infiltration issue #1 from the supposedly ADD 21st century and it seems like everyone at Marvel was off their heads on blue smarties where this was being put together.

The pre-Budiansky US writers (and the fact there's more than two on what was supposed to be just a four issue mini-series says a lot about what a difficult book this was to write) tend to get a lot of stick for being terrible, but here Bill Mantlo and Ralph Macchio can't be accused of being boring if nothing else.

But the really interesting stuff for me is the surrounding comic. This is long before I became a reader and the very different style to what would soon become standard takes some getting used to. In later years the book would be first and foremost a Transformers one that just happened to have a back up strip about other characters. Here, the feeling is more of a robot themed comic that just happens to have Transformers as the cover stars. Something that's emphasised here by the Machine Man back up only getting two less pages than the lead story.

The Smash promo from the editorial.
The way the issue opens with a mish mash of editorial, letters page (thanks to a dummy copy being taken to a school beforehand for feedback. The letters even include some negative comments that get sensible responses, such as criticism for the aforementioned amount of Machine Man) and promotion for various other things like the Smash fan club emphasises the feeling of a general magazine rather than a comic. I suspect Alan McKenzie in his role as editorial assistant had a hand in this as large parts of the issue feel like a more junior version of Starburst magazine, which was then still at Marvel and he was editing around this time. Ironically the teacher of the school class who were show the dummy issue would go on to buy Starburst from Marvel and publish it and its sister magazines for over a decade.

The issue as a whole is a bit of a mess at this point, though that's understandable at this early stage and streamlining will start to kick in fairly soon. And as fast paced as the main strip is, the splitting up of the original issue means it ends before the part that would likely appeal to most kids, the whole “robots in disguise” angle. From a grown up perspective the editorial material being aimed younger than later issues makes it less engaging as well (though of course, that's not a fault of the comic).

But there's still a charm here and, even if it's only in retrospect, the feeling of something huge beginning. The sheer scale of this story is actually staggering, to paraphrase the tag-line for Jurassic Park, it's a story four million years in the making. There will be both better stories and better issues but the foundations laid down here are still nice and solid. 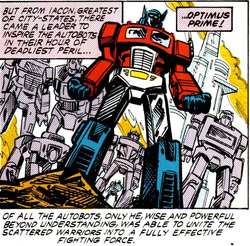 The First Appearance of Optimus Prime.
I'll close from a quote from the Robot Round Up feature: “However, looking to the future, computer expert Hans Moravec of the Carnegie-Mellon's Robotics Institute in America predicts that within 30 years robots will be more intelligent than people and their artificial limbs will last longer than human limbs. As a result people will swap their bodies for robot frames, and their brains will be duplicated by computer programmes”. Am I the only one who thinks that's awesome and it's a real shame it has turned out to be completely and utterly wrong in every important way? 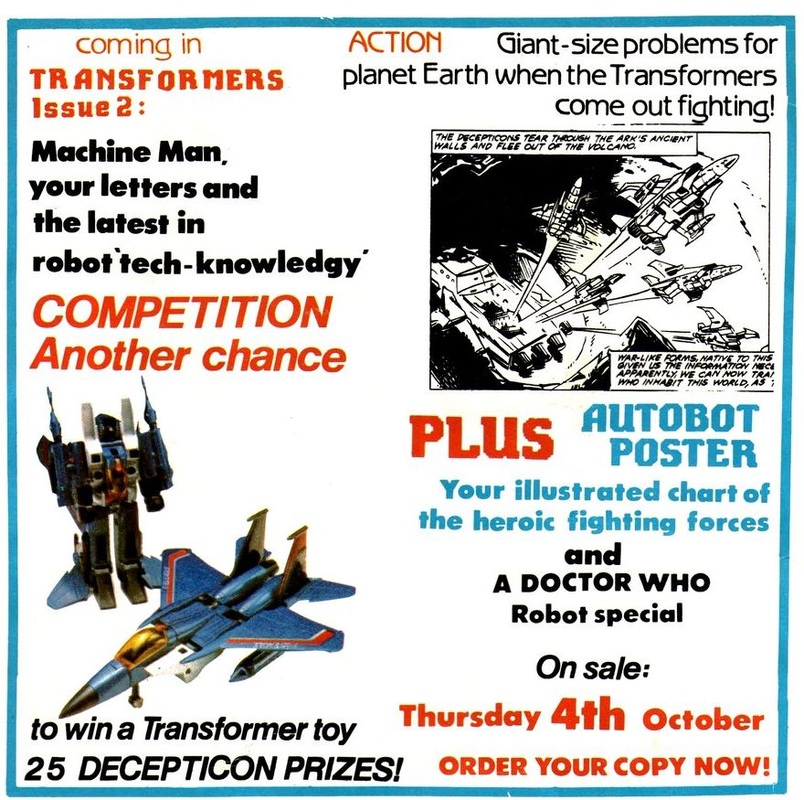