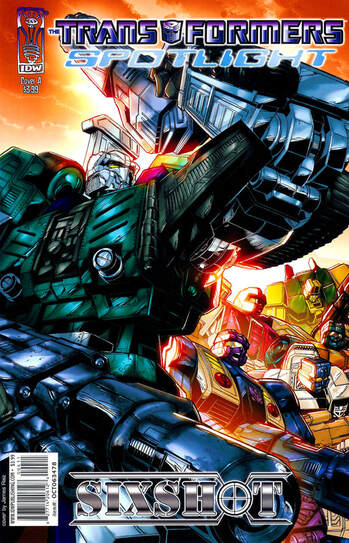 My very strong memory of this one is it was the first outright failure of the IDW run, a true turkey in time for Christmas. A memory that felt supported by the opening page that evokes memories of the silliest bits of Stormbringer, with Sixshot destroying an entire planet as he does a ponderous voiceover.

As noted previously, it’s kind of amusing that, a few issues after a Transformer who can destroy a planet is presented as a one-off terrible unstoppable thing, Sixshot is introduced as someone who just does that as his day job. Though there’s no mention of him having equals or the term Phase Sixer.

Things do get more interesting over the page though as we discover the boredom of being a weapon of mass destruction as he bums around a Decepticon space station, with everyone avoiding him because they’re scared.

Of course, Sixshot is the sort of emo kid who doesn’t need friends (he calls himself “The abyss”. Furman was in his 40’s when he wrote this), but the friends he very specifically doesn’t have are the Terrorcons. Who, in the best idea of the whole issue, are Sixshot nerds who just want to hang out with him and even the name “Terrorcon” isn’t what they’re officially called, they’re trying really hard to sound bad ass. 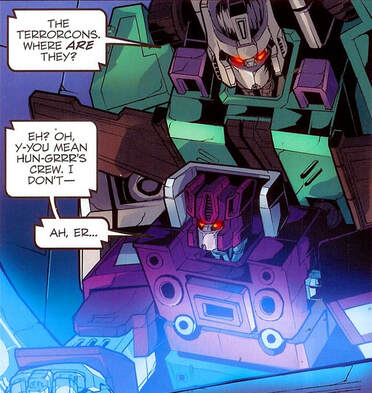 "Oh, those guys"
This is a hilarious and brilliant subversion, and so of course it’s something future writer of them Flint Dille will just ignore. Which is a shame.

It’s also a shame we’re only told about this, we could really do with some flashbacks to Sixshot totally genuinely not being touched as they fawn over him in a desperate geek way. But then, we’d have had to lose some explosions for that and obviously everyone in 2006 knew Transformers was better with explosions than character-based comedy.

Still, having found out the Terrorcons are missing on Muma-Obscura, a planet believed to have fallen to the Reapers, Sixshot decides to go check out the situation. Because he’s bored and not because he cares. Honest.

Arriving at the planet and fighting some orbital defences whilst thinking about how amazing and terrible the Reapers (a coalition of different species that are dedicated to destruction. Hard to be impressed by a group destroying a planet though when we’ve just been told Sixshot can do it alone) are and boy are they impressive.

And then when he lands, we meet them.

Rob Ruffolo (normally a colourist and Dreamwave refugee) does some solid art in this issue. Kris Carter also pointed out to me that from a purely technical viewpoint, this is the best printed art of an IDW comic to date. 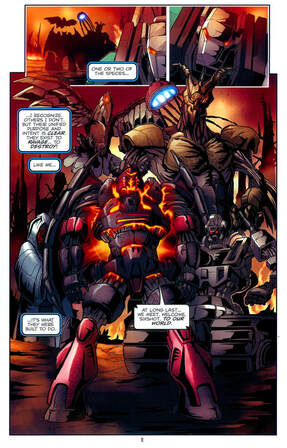 The Secret Six.
But the Reapers look terrible. Especially the EVIL Johnny 5 one. It’s hard not to laugh when they present themselves as the greatest evil in the galaxy and Not So Different from Sixshot.

It also doesn’t help that the comic already has the Dead Universe, the Machination and is about to introduce Skywatch.

Oh, and a little thing called the Decepticons.

It doesn’t need a new recurring villain. Especially a daft looking one. Maybe whatever Furman originally planned for them got lost in the compression, but frankly this would have been better served by Sixshot demonstrating his powers by rescuing the Terrorcons from some one-off and killed enemy.

Their leader, a Deathbringer (a more organic call-back to old Furman material than Sixshot saying “Covenant” randomly at one point) says Sixshot can have the Terrorcons if he can beat them in battle.

Which leads to a two-page fight that’s technically fine, but suffers again from the problem of far, far too much narration that clearly doesn’t trust the art to tell the story. It’s also hard to take seriously as the Reapers are so ridiculous. 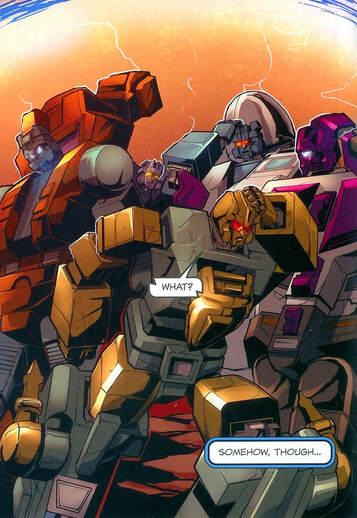 The Famous Five.
It ends with the reveal that the entire thing has been a test, for the Reapers really are Not So Different from Sixshot and want him to join them. All he has to do is kill the Terrorcons first.

Strange opening gambit to get him onside when him caring about the Terrorcons deep down was the bait they used to lure him in the first place.

The Deathbringer is also, inexplicably, pointing at Sixshot like a less evil John Travolta throughout this exchange in a way that becomes increasingly awkward the longer he does it.

The Terrorcons, hopeless nerds that they are don’t do a great job of selling themselves, only being able to come up with being the misfits he already knows. And it’s interesting Furman has, quite by accident it seems, hit upon the sort of group dynamic that will later prove so popular with the Scavengers and, again, makes it a shame they’re in so little of the issue.

In a surprise to no one, Sixshot turns out to Really Care about his fan club, but does dick about by firing all his weapons at them, but missing. The Reapers promise to wait till Sixshot inevitably joins them, but he has come to the realisation he is happy with the real friends he made along the way.

That was actually better than I remembered, largely because the art was itself much better than the Reaper failure made it seem and the Terrorcons are great fun. But it’s a pointless issue, not only are the Reapers irrelevant, Sixshot is never going to go anywhere with his personal revelation as his remaining arc is going to be being knocked out in various ways before a “Oh yeah, he died years go” final mention. 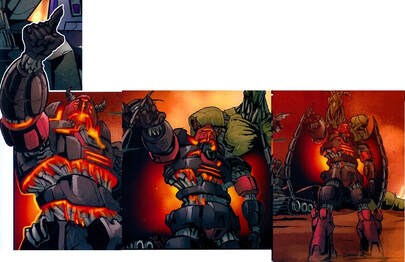 Deathbringer is their point man.
Not everything has to be capital I Important of course, but this is definitely a comic that reads like it feels it should be, and that leaves it underwhelming. So not terrible, but perhaps a sign of things to come.

And that ends 2006, the full first year of the IDWverse and the only year in that 13-year run where the (intended, remember Hearts of Steel was not part of it at the time) entire run of main continuity issues are written by just one person. It’s as close to an author’s vision led take on the comic as we are going to get.

But in 2007 things are going to change. New voices, an unexpectedly huge and popular film means by the end of the that year, even if his run will last a little longer than that, Fuman will not be able to reap what he has sown.

But before that, I jump back a few years to a nearly forgotten Furman comic that may have had a few influences on some of the stories we’re about to get. 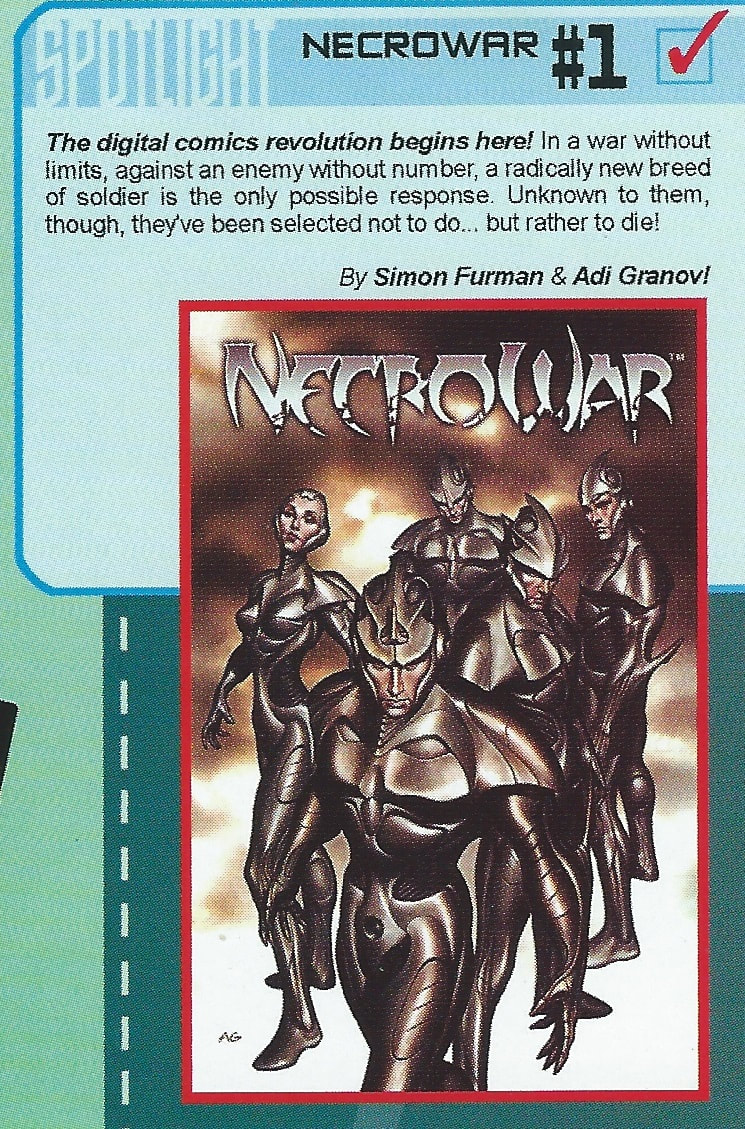