We are the Dead. 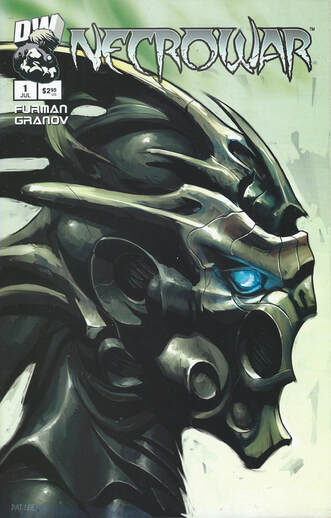 We’re not dead yet.

Now I must admit, my entire reason for covering this otherwise completely forgotten (despite a big promotional push at the time, it’s incredibly hard to find anything out about it now as anything but a footnote to a famous artist’s early career) quickly cancelled comic from Dreamwave was because it’s where Furman first used the idea of a “Dead Universe” and various related concepts that he would recycle into Transformers, more than once as every attempt to explore them died on its arse.

So, I had this whole spiel ready about Furman clearly having what he considered to be a great idea in his head that he was determined to see to fruition in some form (which I believe at least some of it did eventually in ReGeneration One), regardless of reader apathy and cancelled books.

Then, having gotten the three issues on EBay and opened the first, I was immediately downtrodden to read on the credits page “Created by Pat Lee. Developed by Simon Furman” (Additional Development by Kato Lei and Talent Pun. Yes, I Googled that one as well, it seems to be a pen name of a British Columbian designer).

None of which sounds makes it sound like a Furman passion project. 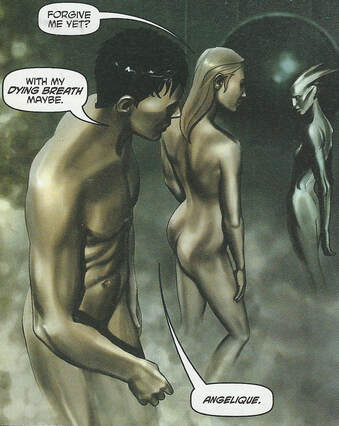 SO GROWN UP
But then I realised that Pat Lee likely creates comics like he draws them: Stealing all the credit. I suspect his contribution to the process was “Here’s an amazing artist with a new technique, build a comic around it”.

And that’s the thing that keeps this comic a footnote rather than being completely forgotten like every other Dreamwave original title advertised in these issues (Darkminds?): the first interior comics work of Adi Granov, using the digital art technique that would be deployed in revolutionary ways on Iron Man: Exremis three years later and creating a massive influence on the MCU. Say what you want about Dreamwave, someone clearly had an eye for art talent.

And of course, by far the most famous name to us now on the book seems to be just about the only person in the office not to be in some way credited for creating it despite providing the USP.

And the series is built around the artist, in particular it was promoted as the first ever all digital art comic. I’m not sure how easy that is to establish (and it is cute “Digital art” is how he’s credited, in these days where the only reason all comic art isn’t done on a tablet is some artists want pages to sell afterwards. People were still having to mail in their art to Dreamwave at this point), but it’s certainly very early days for the what Granov is trying to do.

Which you can tell, Furman has clearly come up with a concept designed to play to the strengths of what you can do digitally (lots of metal monsters and strange aliens), but the humans look pasty, strange and dead eyed. Which does not help the emotional arc of the series. It seems that by 2006, things will have advanced a little. It doesn’t help that everything, especially the symbiotic suits, is so grey. Even the best of the art can be a little murky and the costumed characters hard to tell apart. I suspect the more successful and ground-breaking take on this style being based around the colourful Iron Man probably helped it a lot. 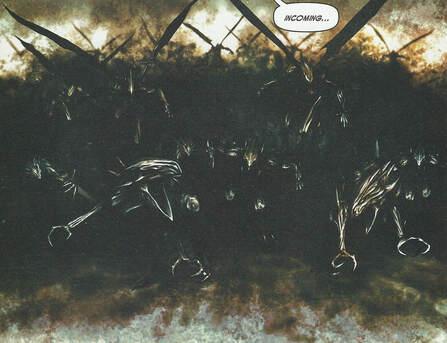 Cyclonus and the Sweeps!
So, with the look of the comic more of a work in progress, what about the writing itself? In his “From the desk of” at the end of the first issue, Furman is honest he hadn’t really worked in comics for years before Dreamwave came knocking at the door with Transformers once again. And whether he created it or not, he’s now excited to be doing something with no toy company oversight and “PG rating”.

So, lots of violence and, inadvertently hilariously, a group nude shower where everyone is awkwardly covering anything that might be a bit rude in every panel because it might not be PG, but God forbid you see a cock.

With him chomping at the bit to prove he’s still got it, it’s a surprise how low key and unengaging it is. I’ve not seen any indication of how long this was supposed to run, but a six-issue miniseries (or six issue opening arc in the unlikely event it was supposed to be an ongoing) seems most likely. But we get halfway through and nothing really happens.

So: Issue 1: An alliance of planets fighting to stop the scary monster (Nemesis Prime) led Necrosis (Expanse) of the Dark Matter (Dead) Universe have created a synthetic suit that merges with human soldiers (basically as the Pretenders will be portrayed).  But they all die horribly on their first mission. 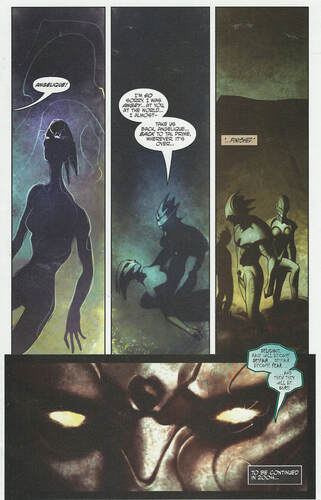 Jonathan Frakes: We made it up.
Issue 2: The Guy One and the Girl One (they are incredibly generic and it’s impossible to remember their names. And I was just looking at them) are not dead, but now weird and freaky and spend most of the issue in bed whilst a Progeny (Galvatron) unleashes death on their ship.

Issue 3: Pissed at being weird and freaky, the Guy One and the Girl One attack a minor planet for reasons that don’t really become apparent before the issue ends with a clearly rewritten at the last second (after the art was done, the fact their alien handler has died, presumably meant to be a cliff-hanger, gets ignored) page where they feel sad about having blown everything up and decide to go home. But “IT NEVER ENDS”.

It’s so rushed you get unresolved plot threads, like the other members of the team who were also killed in the first issue not having had chance to wake up and some flashbacks to a dead body in a corn field go unexplained.

You can argue it got cancelled before it really got going, but if you haven’t at least started to get going by what’s presumably the middle of the story, you probably never.

In his afterword to the third issue, Furman claims the “Hiatus” is down to lower than expected pre-orders. And I can believe that’s what he was told as Dreamwave were famous for bullshitting. And sales certainly did drop-off between one and three.

But my extensive research—looking at his Wikipedia page—reveals that Adi Granov was in fact not paid for his work and couldn’t pay his rent. Something that happened to a lot of Dreamwave workers, but Pat Lee, like many a successful scammer, managed to keep most of the rest working till the very end over a year later for nothing. 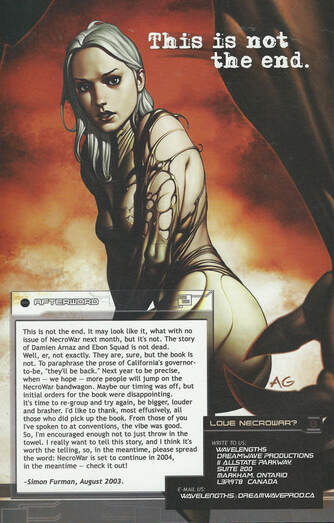 Though as thisd must have been decided almost as issue 1 came out, how many people at cons had Furman spoke to that had really read it?
I think the most likely course of events is Granov wasn’t paid, so he walked at the point he couldn’t afford to wait for vague promises to be fulfilled. As the series was entirely based around his art as its USP, there was no point in continuing it past as far as he’d drawn, even though doing at least as far as 4 before a hurried wrap up would have allowed a way of keeping the property on shelves trade.

I would certainly bet the "Bigger louder and brasher" relaunch promised would have had a new artist if it had ever been likely to happen.

Though as noted, Furman really does believe it’s just a break and a regroup and the comic will be back in 2004.

But it’s very clear he is still enthusiastic and keen to tell more of these stories. Perhaps simply because it is something new rather than a retro nostalgia revival (as just about all the rest of his revived comic writing career would be), it’s just a shame that didn’t come across in the main comic.

But the concepts he did like would be carried over into IDW’s Transformers. I was hoping in rereading these with almost no memory of them that there would be lots of foreshadowing of things to come, in particular Furman’s original plans. But it’s such a short-lived book that (apart really from the Pretender suits), it’s almost more the Transformers work gives you backshadowing of the unfinished Necrowar.

Which means it’s probably best remaining a curio in a footnote on a Wikipedia page. I suspect I’m the first person in 18 years to have read Necrowar, and I equally feel there’s no great need for anyone else to ever again.

Next week, it’s the start of a new year and it’s going to be Ultra. 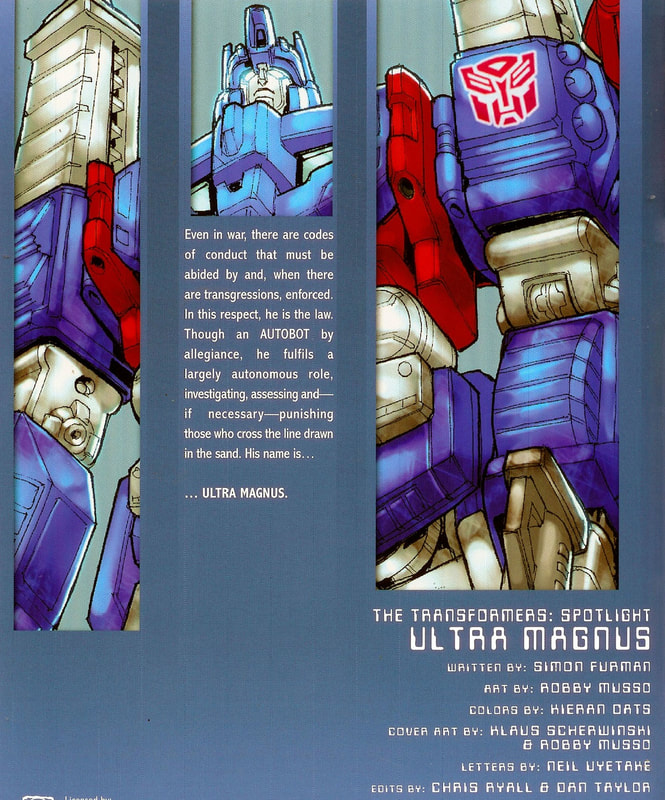