Meaner Than a Junkyard Dog. 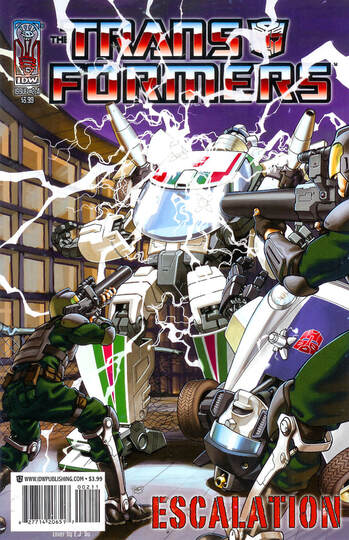 It’s the end of the first full year of IDW Transformers, and as a little Christmas treat, we get two issues out on the same day. Starting, in alphabetical order, with the second issue of Escalation.

Which, again, has a mirrored opening and closing. It does overall feel like Furman has took on-board the criticism of the “Writing for trade” approach of Infiltration and worked harder to make each issue work better an individual piece.

Unfortunately, that means we start the issue with what we now know is one of the very few storylines from early IDW that will not only get no payoff at the time, it will never, ever, be revisited. Even by John “Loves Continuity” Barber. There will not even be so much as a throwaway line covering it.

This being a flashback to 9 months ago where a US senator we’ll come to learn is called Alexander Holt is having a clandestine meeting with an army general talking about Middle Eastern strife, and how it’s bad for his oil backers. In particular, how it’s bad if the strife ends, so can things be kept as unstable as possible there?

This arc is going to try to bring Real World politics into the series to show this ain’t no kids comic, with mixed success, as we’ll see. The important thing here though, is Runabout is watching and Holt is his target.

Maybe that’s why this whole thing never goes anywhere if Runabout is the guy on the case trying to make it work. 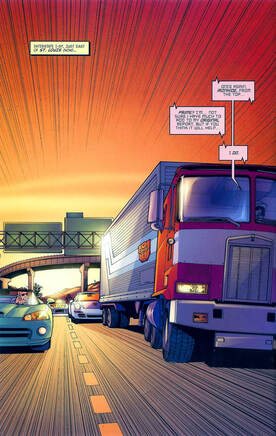 Convoy leading a convoy.
Things pick up immediately over the page though, with a full-page reveal of Prime’s truck mode speeding down the highway with Jazz and Wheeljack, past a sports car with a very confused driver as he sees a lorry overtake him.

The next couple of pages are basically a recap (only really adding that Sunstreaker’s remains have been moved to a police compound in Springfield), but done with style as Ironhide is incredibly pissed and out for blood as he reports in, whilst Verity is sitting in a gas station toilet crying and Jimmy Pink is failing to reassure her.

After the humans faded out as Infiltration went on (and will again as we go forward), it is nice to have a moment spent on their feelings.

Ironhide wants to do something very violent to the Decepticons he assumes are responsible, but ultimately accepts Prime’s order to take the humans back to base whilst the on the road trio retrieve the body as top priority, to stop the humans finding out it’s “More Than Meets the Eye” tm.

What is interesting is that both Prime and Ironhide have holoavatars that can only be described as “Bears”, clearly, they share a type. 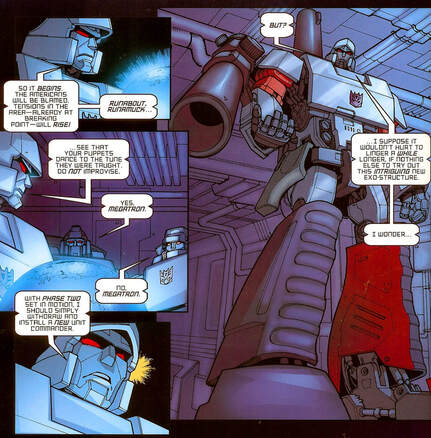 Despite all the reinvention around them, Prime and Megs are now 1984.
Speaking of bears, Megatron is putting his plans into play. Which involves having Skywarp and Thundercracker bomb a Middle Eastern power plant, the idea being it will be blamed on the Americans and destabilise the area.

Which, whilst their musing that their lives could be worse (they could be Starscream) is fun, might work better if they’d have adopted USAF colours to sell it.

But the only change to a body going on is to Megatron himself, as we see his new, G1 based form. We’ll get the reason for this otherwise random seeming reformatting later in the series (though it is clear that for all he shouldn’t be devoting more personal time to one planet, he’s decided to stay and play for a while. He just needs to pick a place to have fun…), but the reveal is a rare art failure from Su as it looks a bit squashed up with only a quarter page to play with, winding up less impressive looking that the Cybertronian mode.

Meanwhile, Ironhide (pleasingly sporting the damage from his vehicular homicide last issue), is giving context for what the Decepticons are doing to Hunter and Verity as he explains the humans they saw could have been Facsimile Avatars, doubles of the sort used to stir up shit and weaken a planet in preparation for the later phases of the invasion. Which is a very 1980s Dalek sort of scheme, and makes Verity realise what the body (now an army rather than a USAF guy) she found in the abandoned Decepticon base was. A dead original. Apparently, they’d normally be kept alive (I wonder if Furman was setting up the real Holt being rescued? We’ll never know) as the doubles don’t last and a new copy often needs making.

Which (other than being very Zygon) is an idea that actually will get a most unexpected follow up. 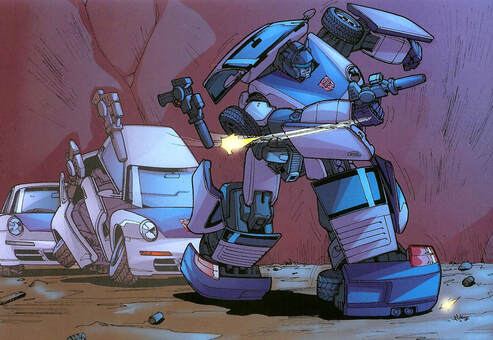 This art is Art.
Over in Springfield, Jazz and Wheeljack arrive at the police lockup, and we get a frankly beautiful sequence of Jazz transforming that, considering it’s a very small moment otherwise, is Su really flexing hard and brilliantly.

Once in the yard, after finding the guard and his dog dead, they are unexpectedly confronted by Machination agents (that might well include Drake, I’m so deeply un-invested in him I can’t be sure). Who proceed to laugh at the idea they should be scared of the big giant robots and use a “Neural agitator style” weapon to inflict a pain field on the two Autobots.

The agents’ reaction is rather poor and awkward for what’s supposed to be professional mercenaries, but I love how Wheeljack responds, to simply talk through the repeated electrical shocks, describing the device, coming up with a strategy and scaring the crap out of Jazz by deciding the solution is to shoot him on the spot the weapon has attached to him.

Which works and, with the favour returned, Jazz is left hoping these guys really were Decepticons for his pride’s sake. Meaning in a couple of pages we see Furman at his best, nice deft quick characterisation for two characters amidst a fun action scene. 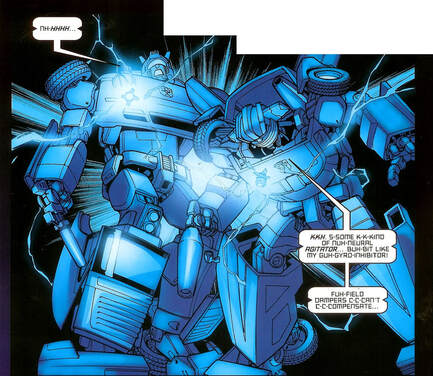 Ticklish Autobots.
Though as the lockup them explodes, I’m not actually sure what the Machination plan is. Yes, the Autobots getting hold of the Sunstreaker body will reveal their plans, but that something more is going on would be notable from the body vanishing. And if disposing of the evidence is the plan, why steal the body and then blow up where it was kept? Why not just destroy it in the explosion? With the Decepticon undercover approach, the Autobots would probably rationalise it as them not wanting the humans to examine an alien as well.

Whatever the reason, the Machination team splits in different directions, with the guy driving the truck with Sunstreaker on it is stopped by Optimus Prime.

Literally. In some quite bad driving for a super mercenary, he’s so busy looking back and the explosion and being smug, Prime is able to just stand there and let the truck crash into him. It’s an eerie, effective sequence, especially as Prime just watches the guy die, adding to his alien and aloof nature at this point.

It doesn’t really make any sense, Prime has just killed a potential lead (it also makes you realise where Ironhide got the killing bug from), but as a silent bit of mood, it’s incredibly striking.

It also gives a glimpse of the future. The Furman co-written prequel to the film starts in February, so he’d almost certainly seen a script at this point, and this is very like the moment in that film where Prime stops the Sector 7 cars with Sam and Mikaela in them. Especially if you assume the earlier draft script Furman likely saw stood a good chance of not having the full Bay comedy flourishes in it. Transformers is very close to changing forever and in ways no one could have predicted. 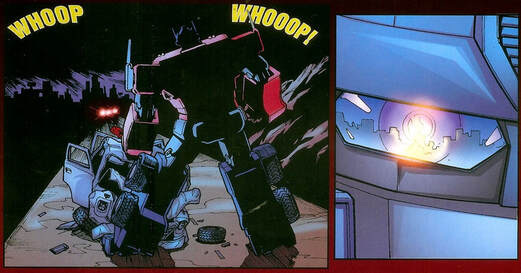 The Prime eye close-up is also basically the revealed in July 06 teaser poster for the film.
Back in Ark 19, the pieces fall into place. An examination by Ratchet reveals that the Sunstreaker body is, for all the modifications to try and disguise it, just a car. A trick has been played and Optimus is now left hoping it is the Decepticons as anyone else would mean the Autobots are “More exposed than we’ve ever been”.

But there’s hope for the humans (and especially Verity. Is her having had more of a reaction to Hunter’s death a result of Furman already having lost interest in Jimmy Pink?) as Ironhide is able to tell them their friend may well still be alive. 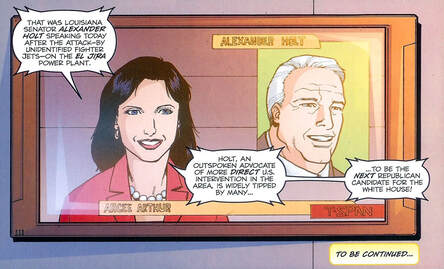 Best Furman Arcee.
But on the TV behind them, news anchor Arcee (sigh) Arthur is discussing Senator Holt’s inflammatory comments on the bombing in El Jira (and more on Furman’s reluctance to use real world countries in his real-world political takes next time) and is all but certain to be the Republican candidate for President in the next election.

Which was a decent cliff-hanger at the time, but now very meh knowing how this will go nowhere.

That was a much better issue though, the Fauxstreaker mystery galvanises the plot and creates a nice tense atmosphere full of nice little character moments for Ironhide, Jazz and Wheeljack.

There’s still a couple of rough moments (and the Arcee Arthur joke is terrible), but it still stands up very well in 2021 and has a strong, dynamic, and dangerous feel to it. I’m going to be very critical of a lot of Furman’s choices as we go further on, but this really is him at his best.

Next week... is not. It’s the final comic of 2006 and it’s one gun without a bullet in the sixth chamber. 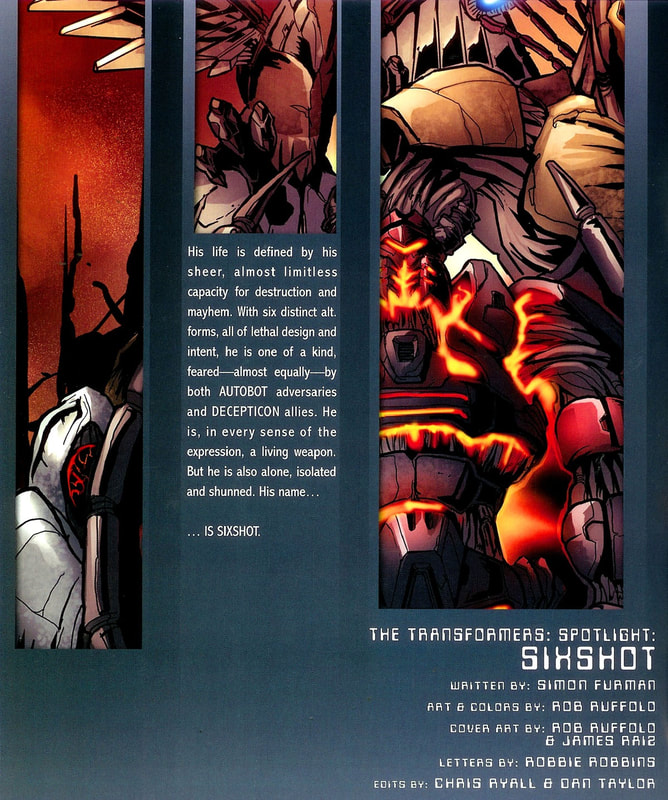