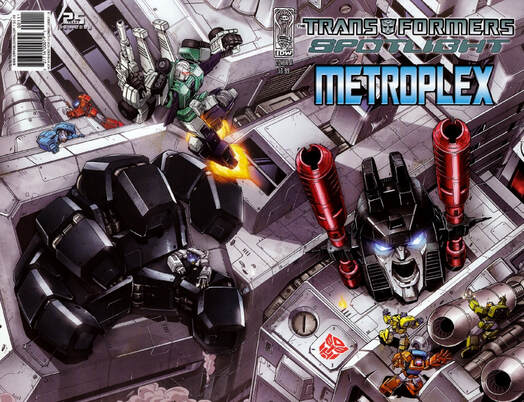 
One quick correction to last week, as was pointed out to me on Twitter, when I said there were only a few odds and sods to come from Shane McCarthy, I had completely forgotten we had not one, but two Drift miniseries to come from him. Oh, the bliss that can come from a failing memory.

Someone else who is easy to have slip from the mind is Andy Schmidt, editor of the Transformers range (often in collaboration with Denton J. Tipton) during what is, a few notable successes like Last Stand of the Wreckers aside, widely regarded as the worst period of IDW comics. And he hardly helped his own reputation with a few quotes expressing annoyance that the readership paid attention to such little and irrelevant things as basic issue to issue continuity. Though there will be more to talk about with that when we get to his most infamous contribution to the franchise in a few weeks.

Here though, he’s writing, the first but by no means the last time we’ll have one of the editors take up the reigns. Officially, as was the case with Furman back in the days he was doing both jobs at Marvel UK, they do not edit themselves (with Tipton doing it here), but I suspect that, as with Furman, the actual editing done by the official editor was fairly basic and they had a relatively free reign. 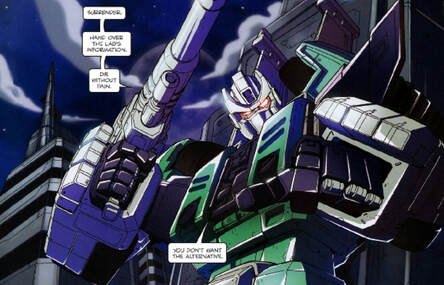 Sniff my finger.
Which is a long preamble on the writer of a comic that is largely based around an art gimmick: Because Metroplex is a Big Guy, the issue is (outside of the first and last pages) told entirely in double page spreads by Marcelo Matere. Which is something he pulls off extremely well, making sure to take advantage of being able to do long wide panels, which still making the visual flow of the images work despite being a little counterintuitive. Though all this effort may be lost if you’re reading a digital copy in a guided view mode.

The other thing to note is that, one odd outlier aside, this is the last Spotlight for several years, until Hasbro required some pack-in comics for the toys. After a few different efforts to try and keep it alive, the range here now seems to have been regarded as a failure, so this could be considered either a grand finale widescreen action piece to see it off in style, or Schmidt using the fact no one cared anymore to be a bit self-indulgent.

All of which, brings us to the story itself, which begins in the heat of the mass Decepticon attack across the galaxy, including a research satellite orbiting Salwatan VI, which comes up fire from Sixshot (who presumably kills cameo guest star Scrounge), forcing the Throttlebots to flee.

That’s the Throttlebots including Searchlight, who is apparently no longer Optimus Prime’s secretary, but a scientist. That’s a fairly reasonably retcon considering how small his role was previously, but it is strange there’s a few moments calling back to his previous job. 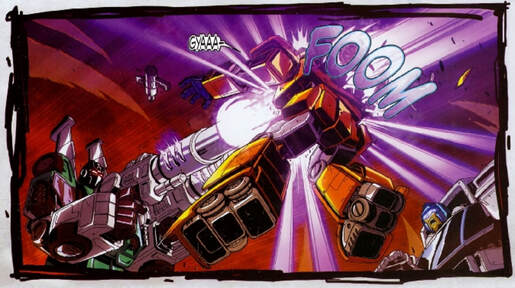 "Not feeling like a gold bug now, are you?"
That’s also the Throttlebots including Goldbug. Which is one of the more baffling choices IDW made. Having Galvatron and Megatron be different characters lets you use the franchises two biggest villains simultaneously, plus they have very different personalities. Having Goldbug and Bumblebee be different people just gives you two almost identical looking little yellow guys. And I can’t imagine anyone is such a big fan of Goldbug and only Goldbug as to have been chomping at the bit for this.

It also would have made no difference to the issue if it had just been five Throttlebots because, other than Searchlight making a couple of references to having seen Sixshot in action before, all their dialogue could be swapped around in a completely random way without it being noticeable. Indeed, depending on the version you’re reading, there’s even some good old-fashioned mixing up of their names. They’re loyal, brave, have a bit of banter and that’s the extent of their personalities. Schmidt focused so much on the choice to make Goldbug a separate character, he forgot to give him a character.

Still, the five interchangeable bots flee the massacre to the planet below, where they’ve known there are inexplicable signs of Cybertronian life, that apparently this research station full of scientists in the middle of a war against other Cybertronians never bothered to investigate.

What they find is a ghost town, an abandoned city which is stocked with everything a Transformer needs, Including lots of real energon. It’s a short reprieve though, as Sixshot is in hot pursuit, giving them an ultimatum: Hand over the lab’s “Information” (and we never get any detail about what he’s after beyond that) and die without pain.

Which they refuse, leading to a big fight and chase across the city and its outside, with attempted bluffs and counterattacks from the Throttlebots going badly. 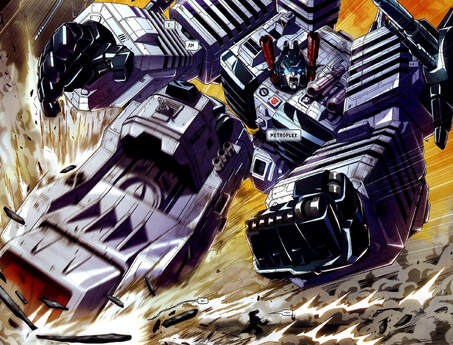 "Metro-Flex" more like.
The joy here though is Sixshot himself. Once he’s done explaining why he’s no longer a mind-controlled zombie, thanks to giving Megatron “Jiaxus’” (an oddly entertaining typo) space bridge tec, the rest of it is just a guy living his best life. The absolute glee he takes in the entire thing, including laughing hysterically as he gets dragged along by one Throttlebot, is genuinely wonderful. How inept this former planet killer is should be an issue, but if the trade-off is him just having a blast (though not as much as Goldbug has when he gets shot clean through the chest) is, accompanied by some very nice art, a real highlight.

It even gets a nice payoff, as, with a gun to Searchlight’s head, he cheerfully asks if the Autobot is scared. To which the answer is “No”, because Searchlight can see the giant hand rising up behind him. Which delivers a slap down to Sixshot that would make Will Smith wince. Which Sixshot actually shrugs off, giving us a funny call-back to the 86 film as Searchlight can’t believe he still functions, but as Sixshot tries to do a boast of “I am Sixshot” …

Metroplex steps on him with an “I am Metroplex”.

Now, this is basically a rehash of the “I am Omega Supreme” stuff that McCarthy has just given us twice, and it’s also ludicrous that Sixshot can be snuck up on by a city. But the Decepticon has been such good value, him getting defeated in the most Monty Python way possible is wonderfully appropriate. 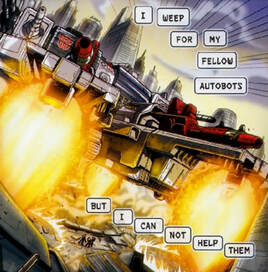 "I have to go do... a thing"
Though it is odd Metroplex only shows up towards the end of the comic Spotlight: Metroplex, as a surprise twist and dues ex machina. Perhaps this should have been called Spotlight: Goldbug.

Naturally, the Throttlebots are delighted to have found the most powerful Autobot, and then dismayed that he won’t come help against the mass attack, because he has a Secret Mission to protect “It”, so please take a shuttle and he has to be off “OK bye”.

This is clearly a slightly desperate attempt to write Metroplex out as soon as he’s introduced because he’s too powerful, but, impressively, we’ll eventually get a decent explanation for this Secret Mission (that apparently Searchlight knows about, but isn’t telling), though one that will make him calling what he’s protecting “It” seem a bit rude.

What won’t be carried over into future stories though is the idea that Metroplex is, if only in an Omega Supreme sense, conversational guy who doesn’t need help to communicate. But, considering his own attitude to continuity, I’m sure Schmidt was fine with that. 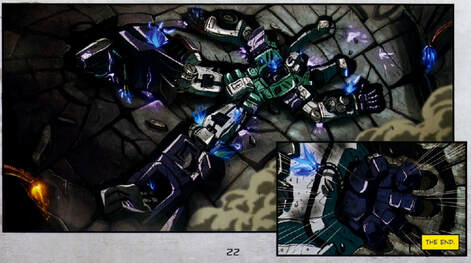 He lives! Briefly.
Because he was the highlight of the issue, it’s also nice the last page shows Sixshot, in a Sixshot shaped crater, is OK. Though unfortunately, this is his last chronological appearance and we’ll eventually be told he died almost immediately after this. The Terrorcons must have been upset.

This is actually a better issue than it seems from a synopsis, because whilst the plot is basically nothing, Sixshot and his extended action scene is light and breezy and unashamedly fun in a way we just haven’t had much of lately. It’s all surface level stuff, and if you know which Throttlebot is which, you’re a better person than me (it’s little wonder it’ll be years before anyone remembers them), and I doubt it’s anyone’s favourite Transformers comic, but as a bit of fluff, it does the job fine.

You just might not remember it ten minutes later. And as a conclusion (for now) to the Spotlight line, it does rather sum up its overall lack of success that this is not remotely a story about the title character, it’s just one he’s in as a way to switch the plot off.

Speaking of plots though, IDW thought there was enough dangling ones to get an extra four issues out of All Hail Megatron, so join me next week to see how that goes. 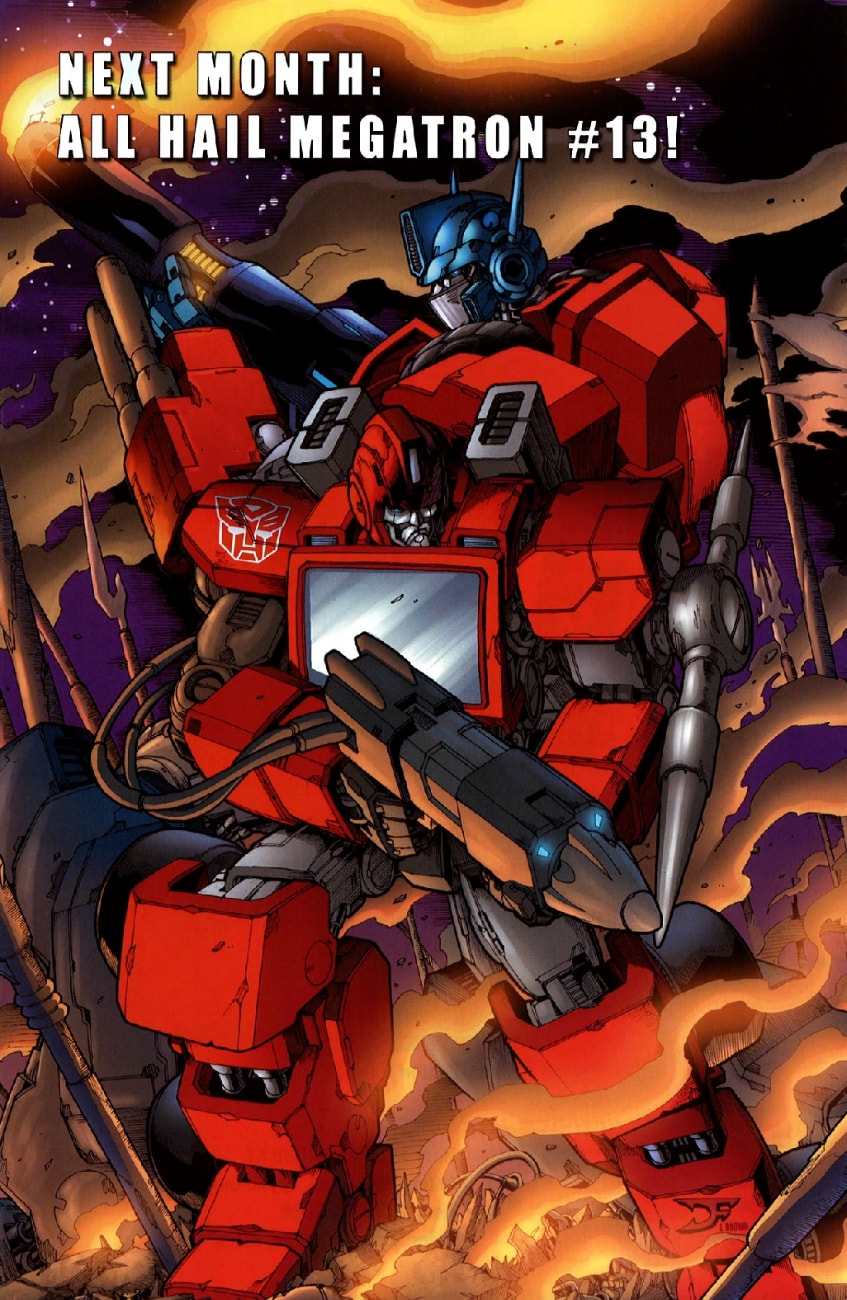