I Guess It's True What They Say, You're Only King for a Day. 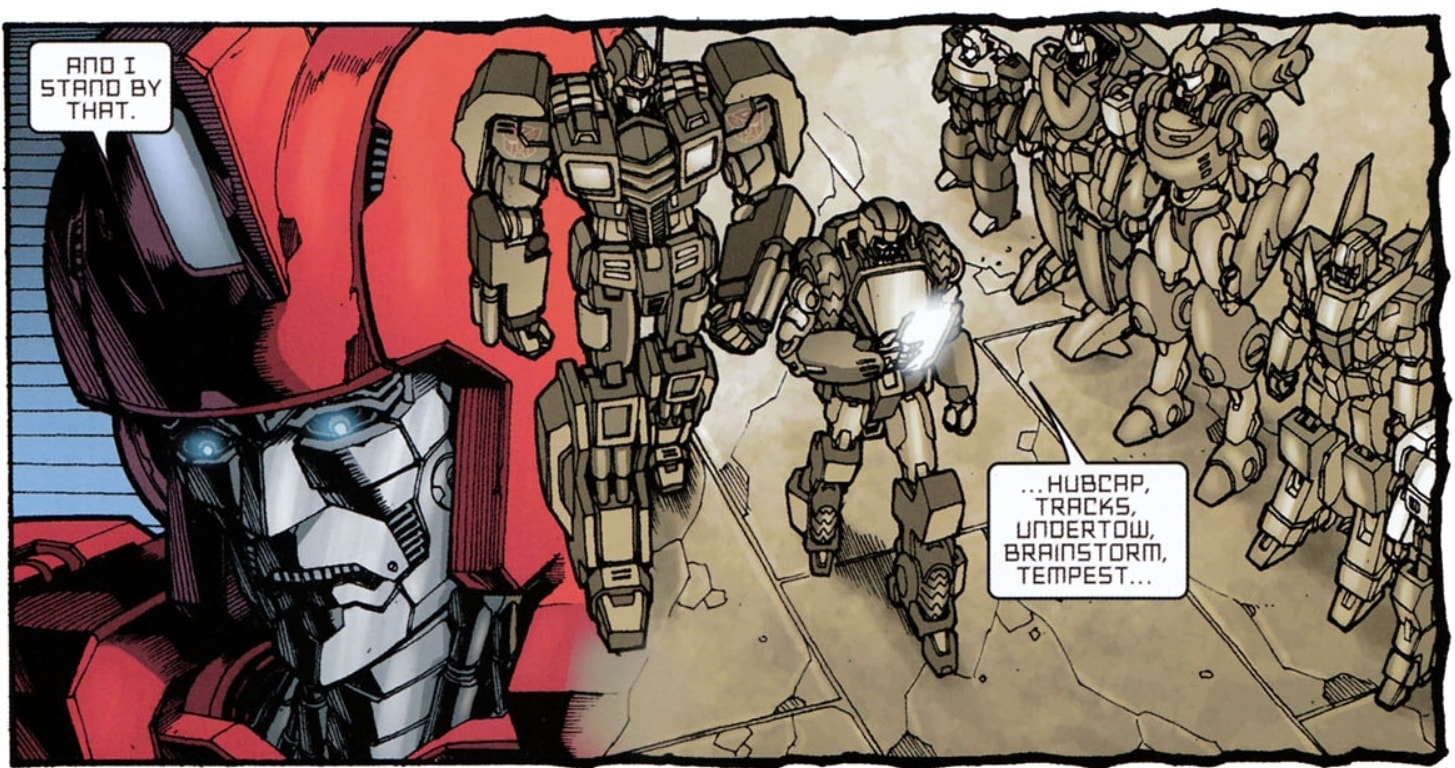 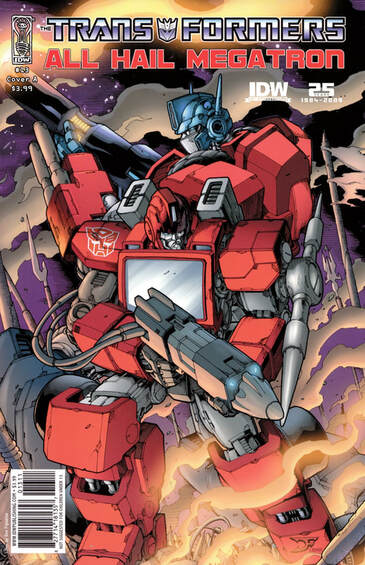 
We have an incredibly exciting and long overdue development this issue, something I’ve been desperately looking forward to since the start of this entire project.

Yes, individual stories now have their own, on-page titles. Something that marks a move away from the “Writing for trade” mentality as each issue (or as in this case, story within the issue) is now presented as an entity in its own right. Which is something that will last right through to the time of writing in the dying days of IDW and marks a distinct step away from trying to write comics as films, and instead turning the series into the ridiculous massive soap-opera that will see them enjoying their greatest success.

What we also have is a mess showing IDW editorial was largely and desperately vamping whilst they tried to work out what the new, new direction was going to be. Initially these four issues were announced as All Hail Megatron: Coda, a separate miniseries that would comprise eight stories, both tying up lose ends that Shane McCarthy couldn’t fit into the 12 parts of the parent series and allowing the new creators that would be handling the three-pronged relaunch to set up their stories.

Then it suddenly became issues 13-16 of All Hail Megatron properly, so late in the day that the Trevor Hutchinson covers still have the Coda branding as the logo was incorporated into the art. 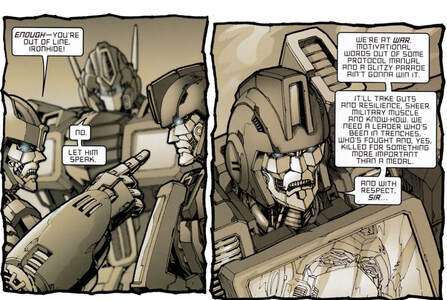 Later writers would use two characters meeting like this to have them fucking by the final issue.
And what bigger sign of editorial uncertainty can there be in the first 11-page story (Old Ways) in this dance around the houses series than it being written by Simon Furman and drawn by Don Figueroa? That’s the writer whose stories were meant to be supplanted by All Hail Megatron and the superstar artist who had already very publicly walked away from Transformers at this point by leaving the second IDW Beast Wars miniseries in the lurch halfway through. It feels like slightly desperate groping for past glories, especially as, whilst Figueroa will be the initial artist on the new ongoing, this is the final main continuity thing Furman would ever write for IDW, with him being largely relegated to half-baked Marvel cash-ins from now on. Despite him being by far the most experienced writer IDW had at 11-page comics.

And it is a shame this is the last time we’re going to be talking about Furman (even if I’ve said that more than once over the last decade), because it’s an entirely nothing story. In theory it’s about dealing the consequences of Ironhide’s attack on Mirage. But rather, it’s using Ironhide’s decision to quit in the aftermath to have him and Prime open some equivalent of beers and talk about the old days.

Giving us three flashbacks. The first showing them meeting as Kup has the new Prime inspect the troops, with Ironhide flat-out telling Optimus he’s an inexperienced youth without a clue, making Prime asked to be taught. The second has Prime refusing to walk into an obvious (in that it’s Trypticon hiding, not exactly subtle) ambush despite Ironhide being all for it, whilst the third is Prime refusing to let go of Ironhide as they both hang over an immense drop in the Sonic Canyons.

Ironhide is the sort of security chief who lets a city sneak up on him.
The gist of it being, Ironhide may not have started off liking Prime, but not only did Optimus learn well from him, Ironhide got a lot back in return and they are the closest of confidents. So, whilst Prime will respect his choice to go, he’s going to miss him.

Which makes Ironhide decide he can’t be outmanoeuvred by an ex-protegee, so he must stay.

Apparently, all of which means the violent attack against Mirage can be forgotten, I guess it’s good to have friends at the top if you want to avoid a court martial.

With what is going to happen to Ironhide in the first issue of the ongoing, I assume this was intended to be a “Last” story for him, but it’s so fluffy and doesn’t really get to the core of his actions in the main series, it’s entirely forgettable. Tellingly, whilst it would never be outright contradicted, but future stories of super-cop Orion Pax leading a resistance movement even before he met Ironhide will be broadly incompatible with what we see here. I suspect Furman was thinking of his “Over-promoted librarian” backstory for Prime from Dreamwave. Which leaves this as a story that can be skipped.

What it is most famous for though, is not the final Furman fling, but for Don Figueroa’s new art style. 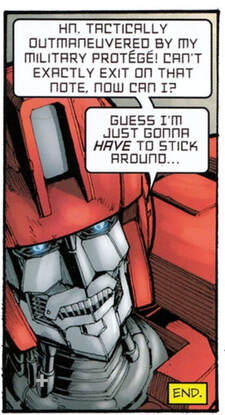 TEEEEEEEEEEEEETH.
As mentioned, he’d walked away to try his hand at other work and, like so many trying to get out of the Transformers ghetto, he failed. I don’t know if he’d decided he needed to shake up his style for greater success elsewhere or if there’s some subconscious slightly bitchy self-sabotage here, but for reasons best known to himself, he has decided to ape the look of the film robots, mapping their extra details and face types onto the G1 designs.

Which, if this had been a new artist, might have been better received, and a large chunk of what he does here looks fine (I especially like the hints of Ironhide’s toy head behind his windscreen in the first flashback). But people had very firm ideas of what they liked about Don Figueroa, the heir to Geoff Senior and this was not it.

And it has the immense dead-weight dragging it down of the faces. What works in a multi-million-dollar film using the most expensive ILM computers is much harder to do with a pen and pencil on a comic schedule and these lipless, rictus grins everyone (even Prime as he retracts his faceplate to drink) has are terrifying and just plain ugly.

Worse, it’s not even a one-off, or just what Don will do. As the starting artist on the new ongoing, he will use this to set the style of IDW for the next two years (though at least only on the ongoing and with other artists creeping slowly away from it as it goes along), giving some of the ugliest IDW comics ever done. 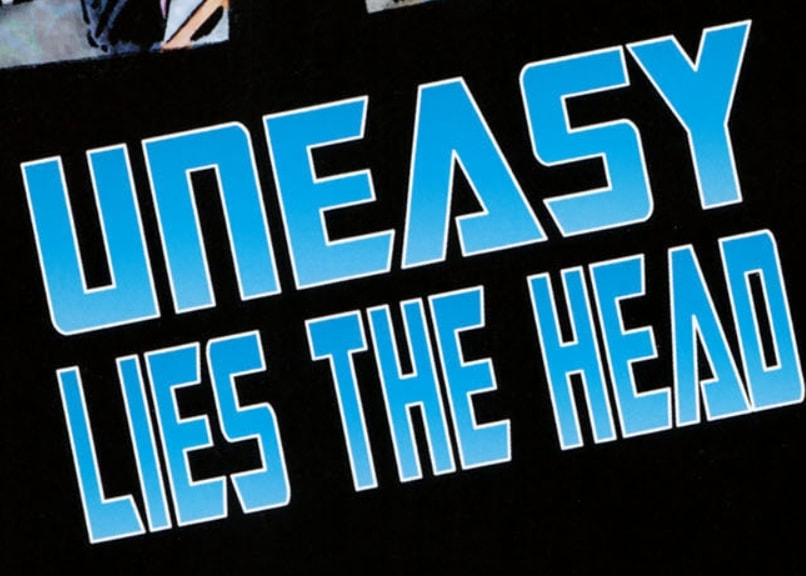 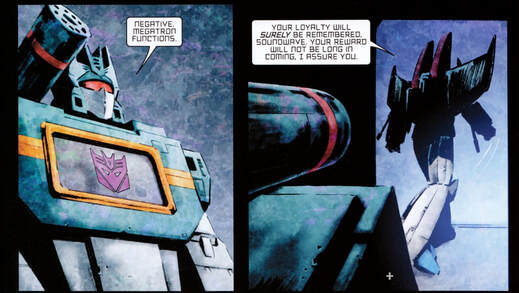 Hey, have you seen The Transformers The Movie 1986?
The second story, Uneasy Lies the Head, gives us a new artist in Chee Yang Ong, who’ll be handling the Bumblebee miniseries, and Mike Costa, who will be the main, lead writer for those two years on the main book.

Chee, who will be largely overlooked as a contributor because that miniseries that represents most of his work was not well received, also gives us a very new style for IDW, but one that actually works, with dark moody dense feeling work that has the touch of early Marvel UK to it and is feels like a precursor to the work Livio Ramondelli will be giving us in a few years.

Costa on the other hand… well, he is the most controversial bridge burning Transformers comic writer of all time, thanks to an infamous interview he gave just as his final issue came out. Which is something we’ll be talking about a lot more as we go along, but for now, it’s fair to say that this point he seemed a reasonable bet as his work on the G.I. Joe: Cobra series had been well regarded.

Albeit by the sort of people who read modern G.I. Joe comics. Maybe that was a sign. His post Transformers work has involved a lot of comics about girls in bikinis with big boobs and visible camel toes fighting crime and we’ll just have to wait and see which end of the Costa Spectrum we end up on. 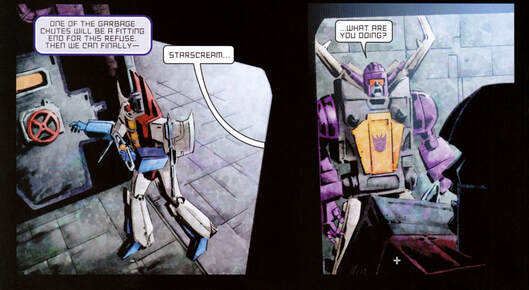 He’s also very dismissive of Megatron’s prize of the Matrix, even as it mentally influences him to throw it out into space as “Junk”, until a passing Shrapnel points out “Whoa dude, that’s pretty impressive you’ve got the Autobot’s magic totem”, causing a penny to drop and Starscream to claim he’s been “Chosen”, and to tell the other Decepticons that he’s cracked the secrets of the Matrix and is going to use it to usher in a new era, before going to have a private stress-out as they cheer his name.

The debt to the Astrotrain sequence in the 86 film is not only vaster than how Astrotrain can suddenly mass-shift to (he’s a full-on spaceship here, with multiple rooms and hiding places), it is hammered home by us getting three variations on “I still function” to describe Megatron’s condition in four pages. Followed by Starscream saying he’d throw Megatron out into space, but he’d probably come back bigger and badder.

It's like being hit in the face with a Matrix.

There is some good stuff here, Soundwave refusing to give ground to Starscream’s bribes or threats to just let Megatron go in peace is great, as is the first outspoken moment that he and his cassettes are more a family than a team. And the Inscecticons loyalty to Starscream is surprisingly funny.

Plus, whatever else you can say about Costa, he does give Starscream what will be his main grift for the remainder of the series, claiming to have been divinely chosen for leadership whilst freaking out about it in private. 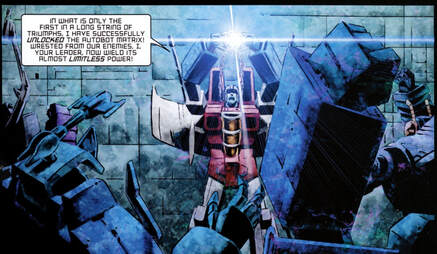 Oh that Starscream.
But Starscream’s attitude is so at odds with last issue, it’s ridiculous. As is the idea none of the other Decepticons knew about the Matrix when Starscream was saying out loud in front of them he was taking it with them. Not to mention Megatron having it out on display in a room without a door on it earlier in the series.

I do remember being cautiously optimistic at the time, because this story looks nice enough and, continuity aside, is harmless enough not to have set any bells off. Those will start with his next contribution.

Harmless but inessential rather sums up this issue, and that both stories are looking backwards, either by hiring Furman or laying on the film references too hard, is not a promising sign. I suspect the real reason this was suddenly made an add-on to All Hail Megatron is that someone realised that there is just not enough here in this messy and awkward mopping up to justify its own comic.

But will that remain the case next week, with Sunstreaker and Galvatron sharing the billing? 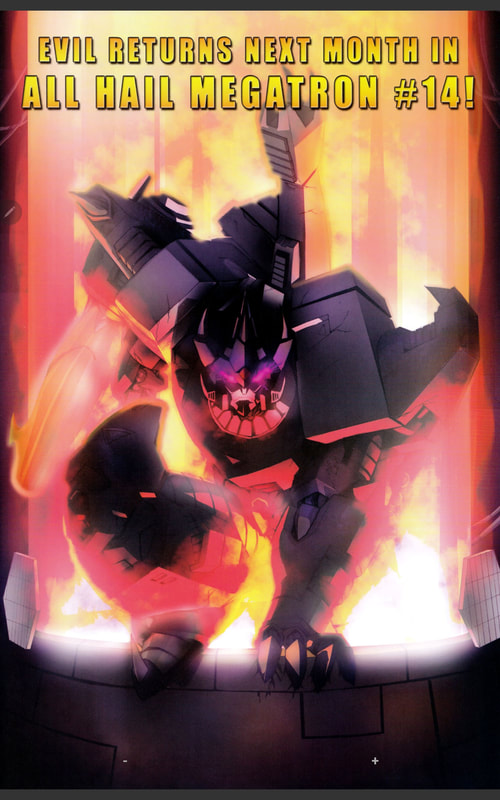