Pour Your Misery Down. 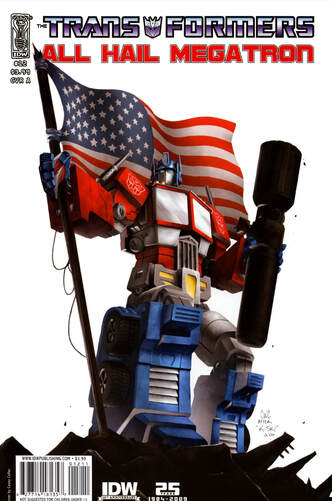 Though the weird and slightly desperate grabbing about for a new direction means we’ve actually got four more issues of All Hail Megatron to go, this is to all intents and purposes the grand finally for Shane McCarthy, with him only contributing slightly to the mopping up and his only remaining work on Transformers being an unexpectedly well received gag one-off Mars Attacks crossover.

And he ends as he started, really dragging things out with us re-joining the fight that has already gone on too long, as Bombshell and Sideswipe wrestle, with Bombshell taking great delight in revealing that he was behind Sunstreaker’s betrayal (which we saw he wasn’t, it was Starscream) and drops the, well, bombshell that he also used Hunter is his plot. Though his gloating doesn’t last long after Kup decks him.

And the ease with which Bombshell goes down is rather amusing in the context of the following IDW continuity, where the Insecticons wind up as the final bosses of the main series. Albeit probably unintentionally with, in the grand tradition of Transformers comics, a hurried due to some form of cancelation wrap-up.

Kup doesn’t get to gloat for long though as Skywarp grabs him and unleashes his most deadly weapon: Continuity, talking about Kup having gone crazy before dropping him in the river.

The funniest thing is, Kup has no idea what he's talking about.
Which is clearly both one final attempt to shut up fans and because one of those four extra issues is going to try and square the circle on Kup, though, despite the fact it clearly must have been well underway by now, in contradiction with Nick’s story, Kup is doing fine without his cy-gar in this fight.

Also doing great is Omega Supreme, who wins his fight with Devastator by blasting a big hole through him and the Statue of Liberty. Which is something I could have sworn happened last issue, but clearly didn’t. It’s an oddly definitive victory for the big Autobot considering the end of the issue would make much more sense if he was badly damaged here.

As Colonel Witwicky (still not actually having been called Sparkplug, right till the end. I wonder when, or even if, that will come in) orders his troops to run from Dropshot and the blast radius as he takes a last stand, Spike and his team, including popular character Charles, are watching the Prime/Megatron fight and hoping the red one is on their side.

And Charles must be a popular character because, whilst he contributes nothing, he at least gets dialogue this issue, something that Sarah doesn’t manage to do, whilst Bridge doesn’t even get to be on the last page with them in it. Charles is even oddly at the forefront of several panels. This is an extremely inglorious end for the two characters who were introduced as major players in the plot and remains the strongest sign of massive changes in the intended plot as we’ve gone along. 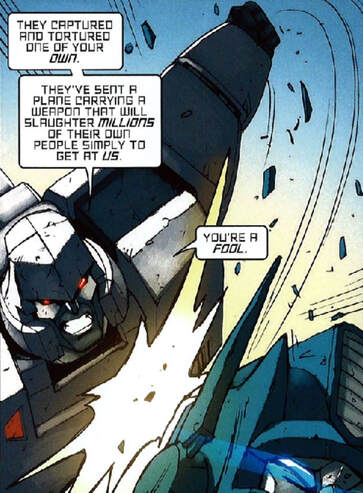 Bit rich coming from him.
Which just leaves me wondering, considering how dishevelled and unshaven Spike is just after a few days, how Bridge managed to keep his head perfectly smoothly shaven throughout all this.

Prime and Megatron are continuing their debate about why Prime cares about humans, with Megatron pointing out they’re awful and Prime trying to refute that by saying…err… it’s not about that. It’s about who the Autobots are.

Which is where we must make another, and not the last, comparison to the first Dreamwave miniseries. Where this exact same discussion is a wrecked city about to be nuked happens. In one issue, Megatron makes his point, surrounded by humans being selfish and destructive. In the next, Prime makes his counterpoint, showing humans doing their best to help in the wreckage (including an infamous and cynical post-911 firemen save the day moment). It’s structured, shows rather than tells and, even if cheesy, makes its point. This poorly regarded comic, and it really isn’t very good overall, writes this sequence much more sharply than IDW manage at a point where they were still sneering at their predecessors.

Indeed, this meandering conversation goes on so long, there’s time for a break in the middle to see Dropshot gloating over Colonel Witwicky, unaware that Kup is coming up out of the river behind him. 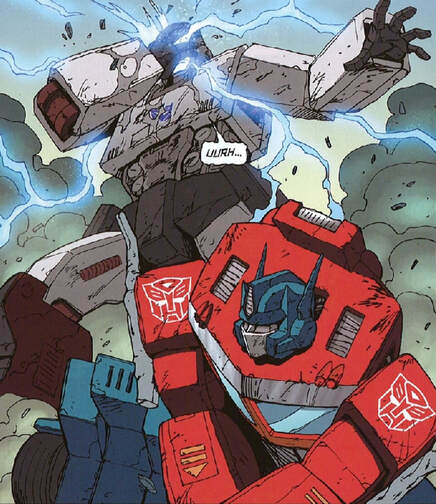 Bit of a cheek to take the piss out of overly repeated moments last issue.
Still, Megatron wins, gloats that he’s leaving and taking the Matrix, before calling Tankor on his nipple radio to tell him to drop the bomb.

That’s not the Beast Machines Tankor by the way, but the Generation One Decepticon previously known as Octane, in our first example of IDW being forced to rename characters in line with whatever name Hasbro is able to slap on the toys at that point. He even drops some sort of green bomber paint camouflage to return to his more usual grey so he can be Universe toy accurate.

Now of course the Decepticons are leaving (so, really the only reason for the Tankor subplot is so the EU can’t call the bomber off at this point), and therefore no longer a threat to New York, Spike takes his shot and removes half of Megatron’ face. Which lets Prime re-enact some poses from the 1986 film. Making last issue’s mocking of over repeated lines and moments all the more hypocritical.

But as Prime wins, Starscream steps in to tell him to back off in the strangest moment in the issue. Starscream grabs the knocked-out Megatron, and claims he’s protecting their leader and, when a baffled Prime points out this is his big moment to claim the leadership for himself, Starscream is aghast and says such a role must be taken, not given by mystical chance (bit rich for someone who takes the Matrix off with him).

Now, even if Starscream has been convinced by Megatron’s masterplan speech, that was based on a grand chess game Megatron was playing that was almost immediately proven to have been totally wrong about when the Autobots returned. So, what is he getting out of this? Why not just take the leadership that he was promised was going to be his anyway? 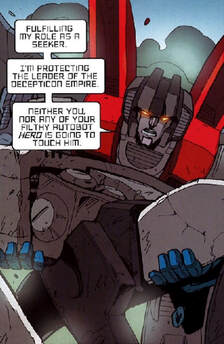 "Only I get to touch him. I know how he likes it"
That Starscream is immediately going to revert to type in the next issue only adds to the feeling that this is an author with no idea how to get Megatron out of there. Not helped by the Autobots just standing there, apparently all having decided to stop fighting. But even if McCarthy was in a blind, wouldn’t it make more sense for Soundwave to be the patriot saying they’ll get Megatron out of there, and to have Starscream only go along because the force of opinion is against him?

Starscream also gets in a parting shot about how the Autobots have still lost the war and are badly outnumbered throughout the galaxy, but, again, we’ll never really get much of a feeling of this having been such a one-sided defeat going forward.

With the ‘Cons gone, the Autobots now have a nuke to deal with, meaning they need someone who can fly. So naturally, they shout at Omega Supreme and…

Well, no, Thundercracker, much to everyone’s surprise, appears and offers to do it, not because of any change of heart (as he puts Drift down for), but because everything they’ve done here has been against the real ideals of the Deceptions he signed up for. 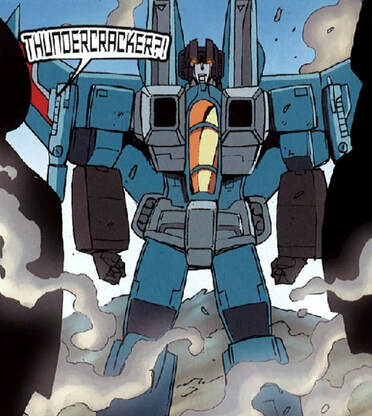 That feeling when you see Thundercracker.
Oh, and apparently Omega Supreme can’t do this because it needs “finesse” to wrestle upside down with a nuclear bomb. Again, why not just have Omega be injured earlier?

Still, in our final, shameless and desperate rehash of the first Dreamwave miniseries, he manages to safely take out the nuke and save the city. Though I suppose to be fair, unlike there he at least takes it into orbit first rather than Superion exploding it over San Francisco Bay.

And, for all he has only had one or two moments of doubt, Thundercracker gets the closest thing to a satisfying arc in the whole series, and this, along with Skywarp returning afterward to (seemingly) kill him for the betrayal will lead to a nice long, and mostly satisfying, arc.

But the best part of the whole issue is Colonel Witwicky and Kup just chilling by Dropshot’s body, with them doing the Terry Pratchett “Why are you wearing that duck on your head?” “What duck?” joke about Kup’s cigar.

You’ve got to take what you can get. 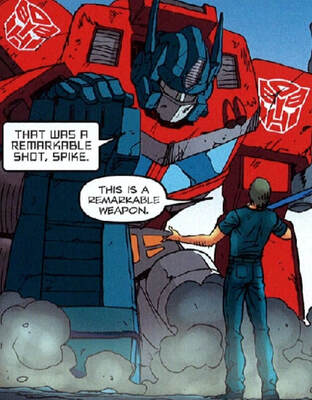 "I've got your remarkable weapon right here, baby"
Meanwhile, Optimus meets Spike (in a panel copied from his kneeling down to talk to them pose when he met the original Spike and Sparkplug in the cartoon) and tries to put a brave face on the mess by saying “Our” (I think he means “Your”) people are free and the Autobots are here to help put things right.

To which Spike correctly (in the last time you can use those two words together) points out that’s going to be virtually impossible after New York was (sometimes) destroyed and all the other stuff happened.

Unfortunately, he says this over the final page and a half of the issue, and series, where Sideswipe goes into a barn… somewhere and finds Hunter still strung up. And even though he’s alive and there’s he’s already made one recovery from being turned into a cyborg Cybertronian experiment, Sideswipe pulls the plug and kills him.

Which is clearly meant to be serious, dramatic and shocking, but everything about how it’s played is just very, very silly. Whilst still being mean-spirited about the Furman stuff.

And that’s how this ends, with a life sign monitor flatlining. What a metaphor.

And I'm pretty sure that's the most they ever get together.
This is, the by now expected good art and nice moments for Kup and Thundercracker aside, a terrible issue that caps off a maxiseries that, frankly, was worse than I remembered.

But then, for over a decade, every time I’ve read this, it’s been in the trades. Where you can get through all 12 issues in less than an hour. Doing it like this, if not quite in real time, then at least over a much more protracted period, really hit home how much of a nothing nearly every issue was, with very few highlights spread out too thinly. 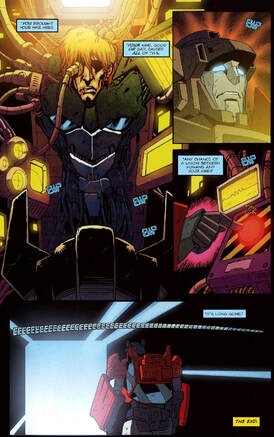 This series... flatlined.
Now at the time, it did the job it needed in terms of stabilising sales. And they stayed fairly constant throughout, so clearly there were people out there who enjoyed this and more power to them.

But, on every other level, this has been a failure. The bold new direction has whimpered out, and it’s very clear from the fact we’re getting four “Coda” issues to try and salvage something from it, that IDW knew this and are struggling badly with where to go next.

This series ended the summer Revenge of the Fallen came out. Which is a movie that marks the point many established fans soured on the Bay films after the first had been generally well received. I’m rather fond of it myself (trim down the collage stuff and rework the twins, it’d be a classic, but it’s still great fun), but even Michael Bay at his worst and most indulgent of all his worst traits, made better “Blockbuster” Transformers than this.

And we’re not over the hump yet.

But before we start the mopping up exercise, there’s a city size Spotlight to talk about next week. 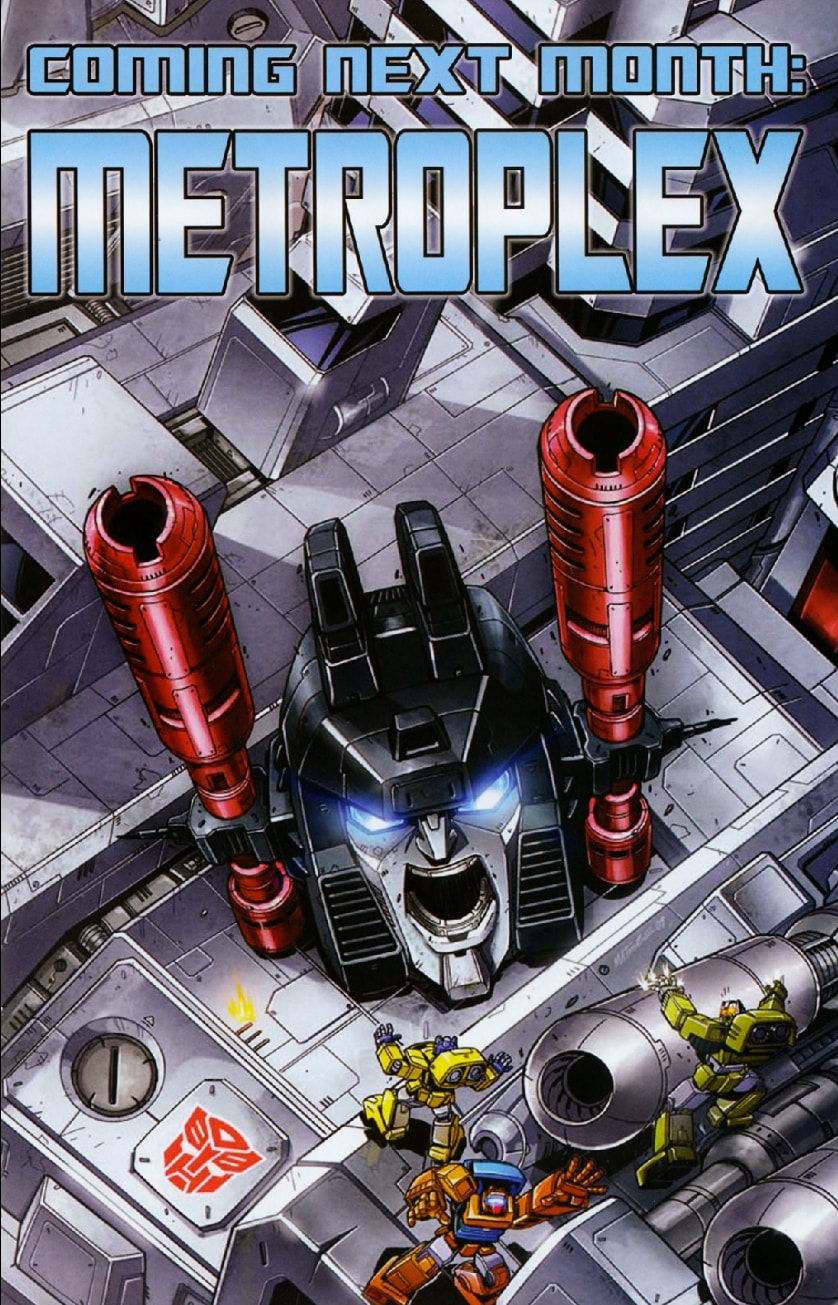