We've Come a Long, Long Way Together, Through the Bad Times and the Good.


Generation 2 had been, largely speaking, a failure. One that could conceivably have finally buried the line until the inevitable 80’s nostalgia fuelled revival that would have come along in the early 21st century alongside Thundercats and He-Man.

But Transformers had made a lot of money for Hasbro, and rather than letting it go, they did something very sensible. They passed it onto a whole new team (from the recently absorbed Kenner toys) with the brief to bring the series bang up to date rather than relying on past glories as G2 arguably had. This time it really wouldn’t be your father’s Autobot.

The net result was the, heavily inspired by Jurassic Park, Beast Wars: Transformers line. And note the ordering of the title there, the fact this is Transformers was secondary, the emphasis was on the new. The same initially applied to the ground-breaking CGI cartoon from Mainframe, the makers of Reboot. Though when you’ve got the script editor of Babylon 5 as one of the show runners things were never going to stay simple, and it and its sequel Beast Machines (with a brief toy only line called Machine Wars in the middle) soon wound up a highly involved sequel to the original cartoon, with elements of the comic chucked in.

I’ll be talking about the Beast era in more detail when I get to the Titan reprints of the IDW comics, but suffice to say it set the tone for most of the iterations of Transformers we’ve had since. In that it was a success, but not anywhere like the at the same level of Generation One, perhaps more analogous to something like MASK. Popular and well liked, but not especially that well remembered now.

It also set the tone for both fandom—OTT “RUINED FOREVER” rants from the emerging forums about Optimus turning into a monkey—and how the franchise was treated in the UK where we seemed to be punished for getting a few extra years of G1 as both toy-line and cartoon (heavily edited and shown intermittently on GMTV without a comic to help this time) were never pushed as successfully as the original had been. 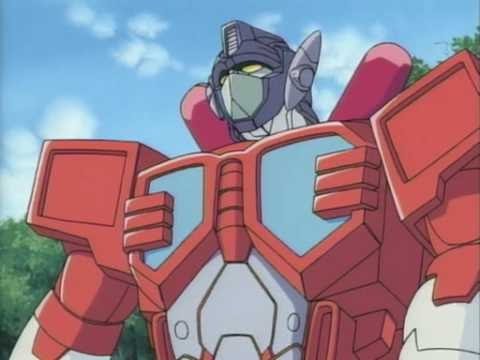 A more classic Optimus Prime for the 2001 Robots in Disguise cartoon.
By the 21st century and the end of the sequel series Beast Machines, the franchise was on the downward turn again. So whilst they had a bit of a rethink, Hasbro brought over the originally Japanese exclusive series Car Robots, dubbing it and renaming it Robots in Disguise. With the luck of he return to vehicle alternate modes and a more G1 look—including some actual G1 toys—meaning it caught that aforementioned wave of 80’s nostalgia (I would suspect it was the first time many of the older fans were aware Transformers was still a thing) whilst still appealing to kids with its Pokemon influenced anime.

This was therefore an approach Hasbro decided to push further going forward with Armada. The new franchise, developed closely with Takara, would continue the use of vehicle modes and a familiar G1 style (thought that’s probably less obvious now we have toys that are even more closely based on the originals than ever before on a regular basis) combined with the trapping of Pokemon by adding a “Gotta chatch’em all” element as the Autobots and Decepticons fought to capture all the Mini-Cons, small Transformers that filled the Micromaster role and unlocked special powers/toy gimmicks when plugged into larger characters.

The cartoon itself is rather looked down upon, though this is from a fan perspective of people who remember the original series as being a flawless masterpiece, but it did the job and the range was a great success. It even got the last big push a non-film line has had in the UK, with the cartoon even grabbing the terrestrial ITV slot used by Pokemon. Which is the circumstances under which a new tie-in comic suddenly becomes viable.

Alongside this, we had the 80’s back in full force. Which again, as the boom has never really gone away (I write this in the gap between the success of Stranger Things and the hopeful success of Bumblebee), might not seem so obvious a thing now, but the as the kids of that time reached that sweet spot of earning money but not being so tied down to mortgages and kids the explosion of stuff aimed at them was massive.

And Titan books managed to get in at the ground floor thanks to Simon Furman. He was effectively retired as a comic book writer by this point (and there is a noticeable difference between his work when it was his day job he was pushing to advance a career in and the stuff post-return), but—alongside freelance cartoon writing that started with the last episode of Beast Wars—was a very successful editor, including for Titan, where amongst other things he oversaw their Spawn reprints.

So just before things kicked off, as more an (understandable) vanity thing than anything, he sorted out acquiring the rights from Hasbro to arrange two books reprinting the end of his run on the American series from when Wildman joined. A way of getting some of his best work back out there that he almost certainly did not expect to do so well that they would work around to reprinting almost all of the American and British Marvel stories between 2001 and 2005. Though the books aren’t perfect (there’s some severe editorialising on Furman’s part that does things like leaving the early UK stories out because he doesn’t like his writing there and extending that to the stuff by Steve Parkhouse and James Hill) they pretty much remain the definitive reprint run of the series as other, more noble efforts have either stalled (Classics UK), messed up the ordering (Hachette) or horribly recoloured the strips (the IDW reprints of the American issues). 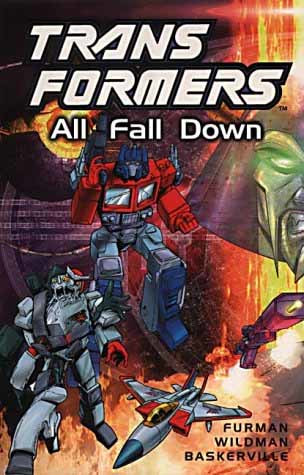 The cover of the first Titan Marvel book.
And I have a particularly strong memory of seeing the advert for the first volume, All Fall Down (not containing All Fall Down!) in an issue of Dreamwatch as the featured release for the month from Titan. Pre me being on the internet this was the most exciting and incredible thing I’d ever seen. The series also had some good extras we’ve not seen elsewhere, such as Uncle Bob’s first pitch for the Matrix that clarified it was only one way of creating new Transformers and his Blaster inspiring backstory for the Action Masters.

Perhaps more importantly though it reconnected him with work that otherwise had become the odd convention at this point. Which was handy when the biggest and most unlikely of things happened across the Atlantic.

In 2001, Devil’s Due had bought the rights to G.I. Joe and put out a comic that, thanks to both the nostalgia boom and the post 9/11 atmosphere, became the number one selling comic of the time.

Unsurprisingly Transformers became the obvious thing to do next. Especially as its John Wayne inspired hero would again go down well in the post Twin Towers world. Though in these days of brand synergy it’s odd that Devil’s Due didn’t get it (though they would do several stand-alone and insane crossovers with G.I. Joe), with it instead going to the infamous Dreamwave.

Now, much has been written about super star artist and low level fraud Pat Lee, and I’ll touch more upon that when I talk about what happened between Armada and the films. But the initial six issue miniseries drawn by him and written by Chris Sarracini in 2002was the first ever chart topping Transformers comic. And their initial wave of sequels and spin-offs all did pretty well despite poor critical reviews and delays already starting to set in. Their Armada comic was initially a top 10 bestseller as well.

Furman was brought in to write a prequel series to their vaguely cartoon influenced (indeed, you get a good way into the first miniseries before there’s a firm detail that makes it clear it’s not set between season 2 and the film) Generation One comic, with The War Within again doing very well and quickly getting a sequel. And when Chris Sarracini became the first of many people to suddenly stop working for the company, leaving the Armada ongoing without a writer, Furman was quickly hired.

Which means that, when Marvel UK successor Panini got the rights to produce their own comic that, like Fleetway’s Generation 2 would be aimed younger than the American and they wanted someone local with experience, one name became an obvious choice.

Which brings us back to where we came in.

Next week... the return of Wildman. 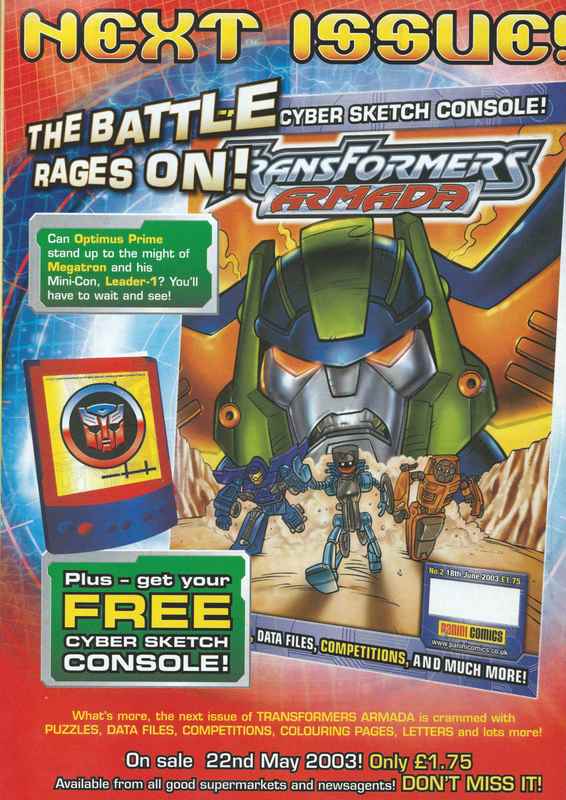