Feels So Good Inside. 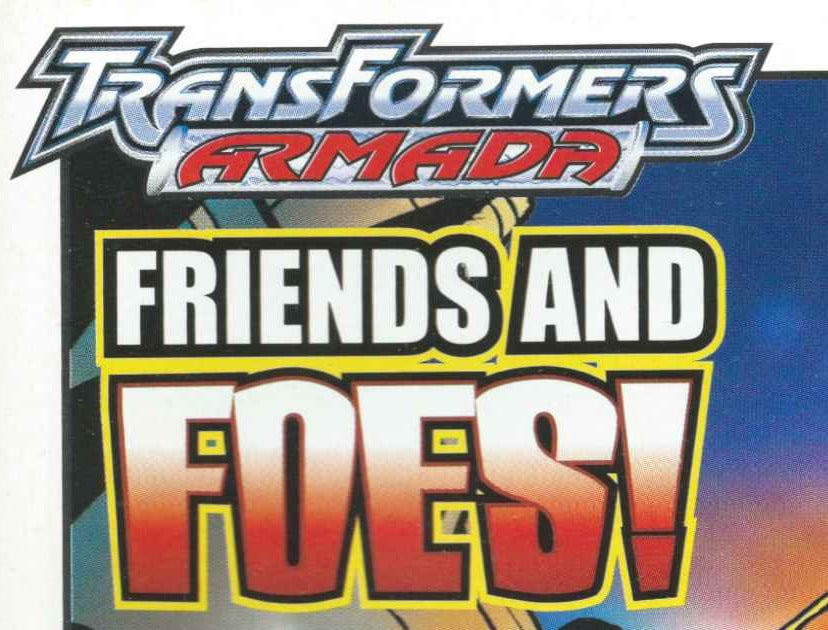 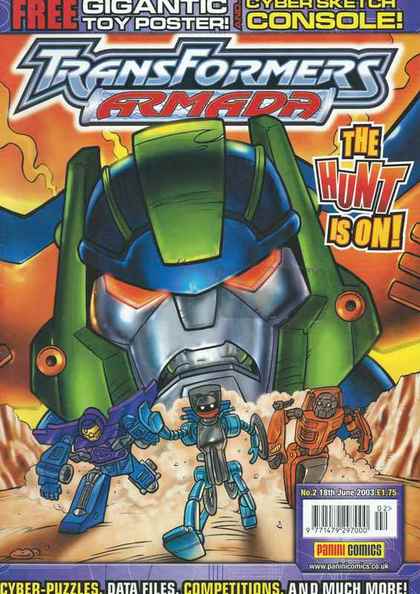 
The Geoff Senior cover on the first issue was only the beginning of the old guard returning to use Transformers as a top up to whatever their day jobs were at this point. For the second month, Andrew Wildman reunites with Furman for the first time on a regular comic (though they’d been working on online stuff as part of the Wildfur partnership), some five months before their work on the second Dreamwave War Within miniseries.

It’s tempting to think that this was the result of a similar situation to that with Dwayne Turner on the Marvel book, with Furman being unhappy with Jon Mitchell and suggesting his old mate step in. But either way, this was another handy bit of promotion towards the fan community, a British Transformers comic by the classic team.

But the result is not great. The basic colouring from Junior Tomlin doesn’t help (seems Senior Tomlin wasn’t available), nor does not having the ever reliable Baskerville on inks. But the big issue boils down to one thing. I was at an Auto Assembly, which would have been either 2003 or 2004 (no one cared about asking Armada questions after that), where Wildman cheerfully said during the Q&A that his art on this book was intentionally crap because Panini didn’t pay well enough to make it worth his time to put any effort in.

Now, of course he’s a freelancer and freelancers have to prioritise their time in relation to money, there’s no shame in that. But equally, later in the book we’ll see a better standard of art from both old hand Lee Sullivan and especially new talent Simon Williams, neither of whom I would expect was paid more. But then Sullivan was still actively working in kids comics and Williams was making his break into the industry. Both had better reason to maintain a standard that someone who predominately worked in other fields now, who could happily crack wise about it as it didn’t matter to much if doing so hampered getting future work. Perhaps, as was traditional with a kid’s toy book, it should have been used more as an entry level job for people paying their dues than a pension for the retired. 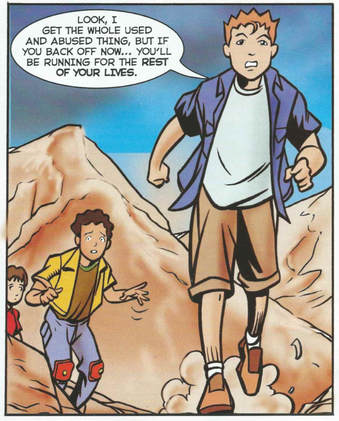 Carlos is like, "How did he know?"
But that said, the art is still an improvement on the first issue by some margin, especially as even with an apathetic Wildman you can still follow the flow of the action and there are some solid panels here and there, even if there are also some very poor ones such as Megatron and Optimus both loving to thrust their crotches forward when being dramatic.

And it is all better than the (possibly Mitchell?) cover where a big close up of Megatron’s head is inexplicably drawn as looking like Dinobot from Beast Wars.

If the art shows some improvement, so does the story. It’s still incredibly straightforward, to the point it’s actually a marvel it’s fourteen pages (future issues will do two stories an issue), but it feels a lot more solid and fun.

Indeed, the fact that the first issue might have been somewhat dragged out is signposted by it being quickly and successfully recapped in just one page. The new material starts with Optimus and Megatron holding hands again, presumably post-coital after the more compromising position we left them in last issue. Though the relationship quickly turns sour with Megatron giving Optimus a good punch before coming very close to quoting Pokemon as he tells Demolisher, Cyclonus and Starscream “I want them all!”.

This simple action scene with a bit of humour is the best part of the issue. The weakness comes when we cut to the humans and the Mini-Cons. This is where we get a preview of what will become a favourite way of padding out a story from Furman (most notably when he does it what feels about 50 times in Maximum Dinobots), the Mini-Cons are reluctant to fight and don’t want to get caught up in things, and so leave. But, TWIST!, they come back at the key moment like some sort of a Han Solo. 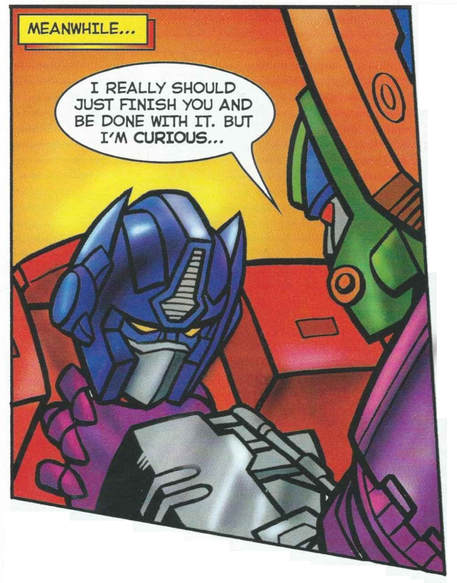 Now that's a G1 head.
This is also where we get our first real heavy focus on Rad, though in the grand tradition of Jimmy Pink, Carlos and Alexis are very much just there for him to talk at (though Carlos does get to drop a Fumanism when he goes looking for more Mini-Cons in the ship). Rad tends to be a wildly unpopular character, even amongst the target audience at the time. This basically boils down to his portrayal in the cartoon, where he’s an ever so slightly out of date middle aged conservative’s idea of a cool young kid and as such seems to have escaped from the early 90’s where he should be hanging about with Alex Mack. That coupled with him being the narrator of the series (“I want to tell you about the Transformers!”) meaning there was no escaping him tended to rub people up the wrong way.

Furman is of course a middle aged guy himself by this point, but whilst he’ll often falter with young American characters, that’s not too bad here. But Rad is still a totally insane dick, trying to shame not just the Mini-Cons, but his two human friends for not wanting to get into a fight with giant alien death machines before storming off himself to...err...do something.

What especially stands out is a moment where Rad is presumably meant to be talking to the Mini-Cons, but because it comes right after he’s had a go at Carlos and Alexis it looks like he’s calling the other two kids “Used and abused”, making you wonder what the hell has happened in their lives.

At the fight, Megatron is briefly excited by the fact Optimus has come alone, suggesting the other Autobots have followed a secondary transmission to the moon. Which is when Rad turns up and tries to make a deal, which just gives Megatron a good laugh and has him simply try and kill the kid. 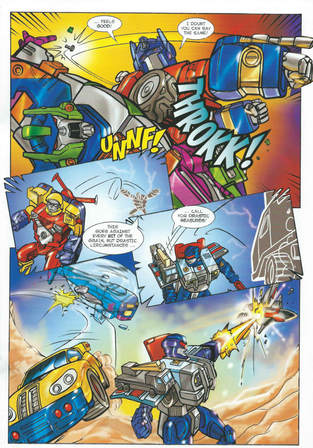 The action highlight of the issue.
After the mid-comic break though, the Mini-Cons unexpectedly come back! Has anyone ever been fooled by that sort of twist? This distraction allows Optimus to call in Red Alert and Hot Shot who were not on the moon but...err...watching? Which is when the Mini-Cons reluctantly (well, I say reluctantly, I think Jolt doth protest too much) plug into the bigger Transformers. In theory this should be where the play gimmicks this unlocks on the toys should get an airing, but with only two pages left all it can really do is make it look like the Autobots are on steroids.

But it’s a reasonably drawn sequence that ends the issue well, with the Decepticons running off, before we get a tease that Carlos has found something surprising in the cave to lead into the next issue. The end result may not be a classic, but it’s enough of a step in the right direction to suggest the next seven weeks might not be quite the slog I was expecting.

The free gift claims to be a “Cyber sketch console”, which, as far as I can gather, is a cheap small whiteboard.

The Portal tries very hard this month to make sure this light fluffy kids comic seems as depressing as possible, as Highwire talks about how awful it is to be caught up in the world of Transformers, where the Decepticons want his kind for slaves... “Or worse!”. Jesus Highwire, what are you trying to imply? 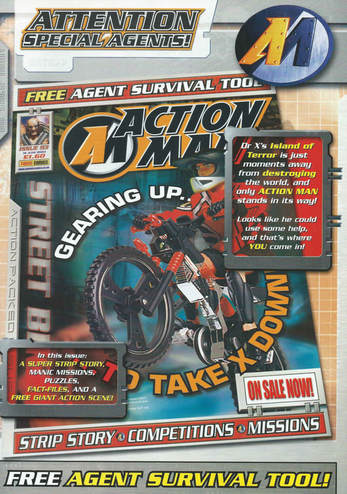 For the Action Man fans out there.
Screen Scramble! is a copy out the messed up grid art to reveal which Autobot is hidden within it puzzle (it’s Optimus Prime); Data File 3 and 4 covers Megatron and Leader-1 (the best ever Leader-1); Incoming Fire is a colouring page of the Autobots under attack; Grid-Locked! is a word-search where the unused letters spell out a secret message (“Soon at the Mini-Cons will be mine!”); Win Starscream! is a competition for the toy where you have to answer how many Mini-Cons are in the comic; Cruel Intentions sees Sarah Michelle Gellar kiss Selma Blair... I mean where you answer questions to see if you’re evil enough to be a Decepticon (Have you ever referred to your friends as “Henchmen”?) and Motorway Mayhem! has you help Red Alert through a road system that has too many traffic lights and—if you find the safe route and send it in—you can will the Mini-Con Military Team.

There’s two posters this month. The first, Hot Pursuit!, makes me wish I had a scanner that was bigger than A4 as it sees the return of Lee Sullivan and is the best art in the issue. The second is a massive, massive, fold out showing all the various toys, with some, such as Mini-Con Backtrack in early colours.

Hot Shot’s Hot Mail doesn’t have any obvious fake kids this month, though I’m not entirely sure “Julian Scoot” is a real name. More notably though is that the standard prize for getting your letter or art published is a VHS tape of the series. Which is pretty much the last time we’ll be seeing that medium.

Next week we get into DEEP trouble, not only looking into issue 3, but also the cartoon. 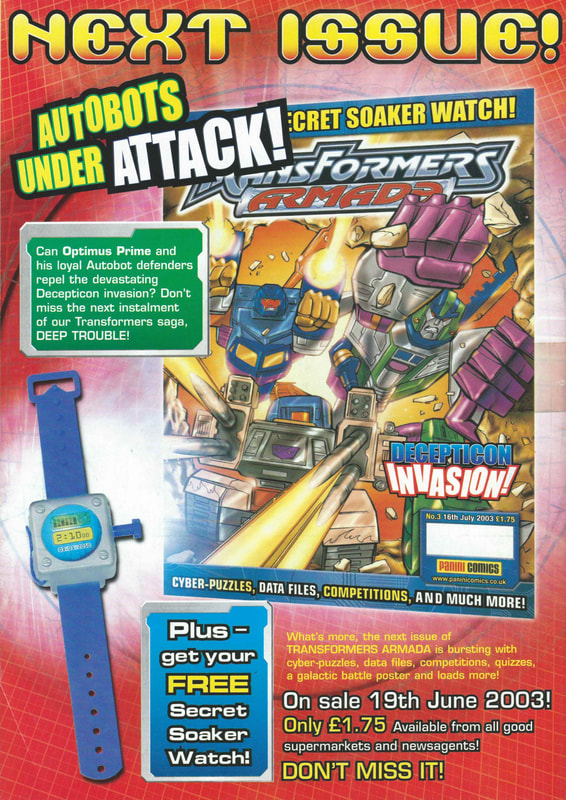