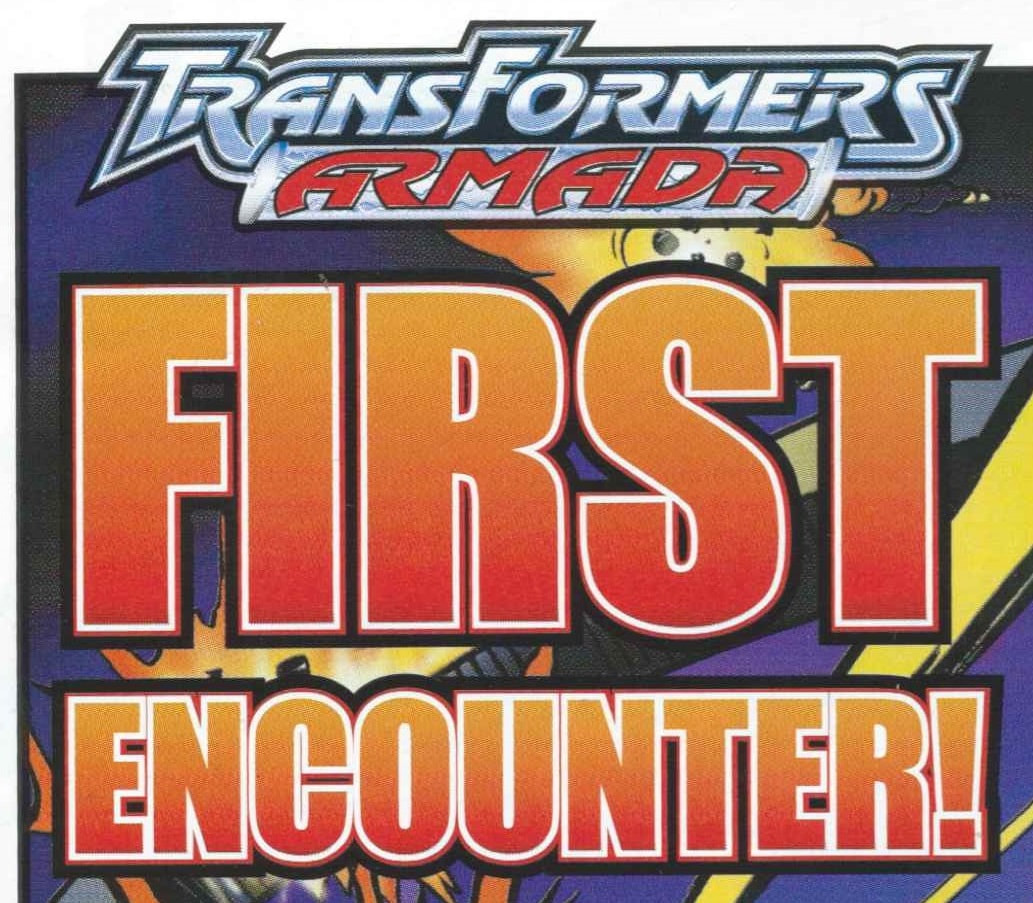 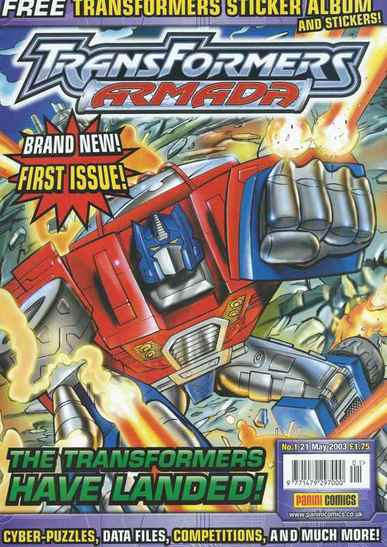 
*As with the first G2 issue, the exact date doesn’t seem to be online, this assumes the four week release date was standard. Note the cover date of 21st May is the day before the next issue is released rather than the same as was the case with Marvel, and that this comic is released on a Thursday rather than a Saturday.


Hello Century 21. For a broad summery of the preceding 8 years, have a read of the accompanying piece linked to at the end of this article. It’s fair to say however, that we are now looking at one of, if not the, most niche and forgotten Transformers comics of all time, and one that’s also aimed so much younger that it’ll be hard to deconstruct some sort of post 9/11, or indeed an impact of any sort from the Noughties world beyond Pokemon being very popular, from this take on the series. So what is there to talk about that will keep you interested dear reader?


Well, the first thing of note is the Geoff Senior cover. The first of a few times he’d be lured out of comic retirement before making more of a concentrated return in the last few years. On the surface, going to the effort of getting blood from a reluctant stone (this was very much a favour to his mate Furman, who seems to have had a very influence on the hiring on the series over editor Alan O’Keefe) seems absurd. The target audience would have no idea who he was as this is aimed very young and unlike G2 we’re not close enough to the original for there to be much theoretical crossover, yet it was a heavily promoted online aspect of the series. 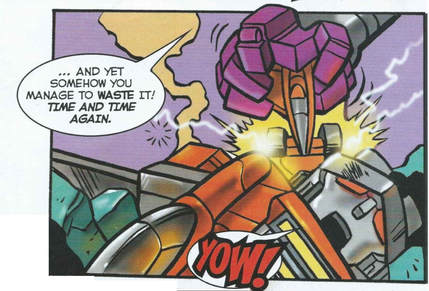 My reaction to the art.
However, as we’re now into the first real strong thrust of adult fandom, we’re still at the stage where people were buying and watching everything through the sheer novelty of it, when there’s a tendency now for us to be more picky and choosy and accepting that a very child orientated take will not be for us (well, unless you’re an angry TFWer). I have a specific interest in all the British comics, but whilst I saw every episode of Armada, I’m still lost somewhere in the middle of season one of Prime. It was a reasonable assumption of Panini that there would be an audience that would be excited by a Geoff Senior cover, even if it’s a long way from his best work.

The same applies equally to Simon Furman being the writer when to be honest, the tone this series is aiming for doesn’t really need such an experienced hand at the helm. Why he took on the work is equally straightforward, he’s still a freelancer and a good freelancer never says no to work, especially as his return to comic writing was still fresh at the time. It’s the same reason he accepted the gig on the American Armada series despite initially not being that hot on the franchise and taking a few issues to warm up (this was published alongside the 9th issue of that book, his fourth). 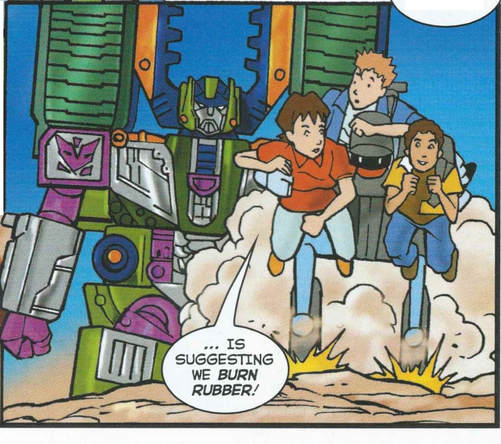 "You don't want to look at the toy for reference?" "Please, I know what a bike looks like"
In tone this comic is very much of a piece with the Generation 2 comic, and later issues will repeat the pattern of that book of loosely adapting American stories in a more simplified way. But Furman didn’t write the opening Dreamwave arc and—bar one panel closely based on one from that series that may have been done off the back of the artist—decides to completely ignore it. Which is the right thing to do, Dreamwave will become notable for screwing over its creative teams, so not recycling Chris Sarracini’s work with no pay or credit to him is a good call from Furman.

The obvious influence is clear from the title, First Encounters!, the same as the first episode of the cartoon. This is Furman reworking the basic plot of the opening story of the series. In particular the desert battle where the humans and Transformers all first meet on Earth.

But that’s getting ahead of ourselves. And this very long preamble has been mainly to try and avoid talking about the comic itself, which is terrible. Largely because of artist Jon Mitchell’s incredibly basic and awful art which is badly proportioned, hard to read and has no effort put into it. Low points including what is supposed to be Megatron pulling Mini-Con Swindle off Starscream, but which instead looks like he’s using the small F1 car (everyone has Earth modes already) to clean out the earwax from his Lt’s ear.

The story itself though feels equally basic and quickly written. We open on Cybertron in the present day, where we’re quickly introduced to the new iteration of Transformers, including familiar names in familiar roles like Optimus and Megatron, plus new characters with occasionally familiar names like Hot Shot and Red Alert. 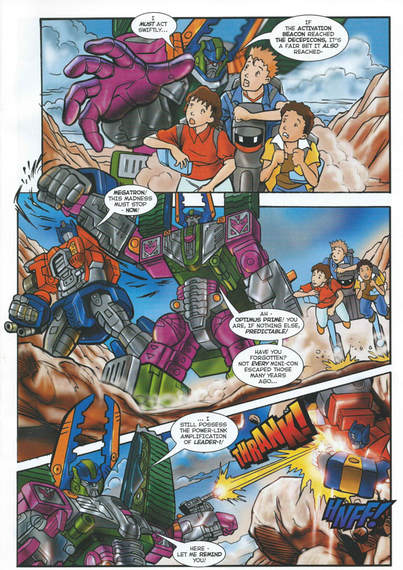 A page I've included all of as it was hard to edit, but it kind of sums up the whole art failure.
It’s rapidly established that the war has been going on for a long time and has been in stalemate since the bulk of the Mini-Cons (basically the aforementioned Pokemon crossed with Micromasters, small Transformers Megatron forcibly altered to give a power up when plugged into a bigger boy) fled Cybertron to escape Megatron’s grasp (though the cons do still have a couple of prisoners), leaving Optimus glad that the balance of power has not tipped in his enemies favour and that he hopes the fled Mini-Cons never turn up again.

Despite the incredible awkwardness of the battle on Cybertron, with only Prime telling Starscream that he’s only a threat if it was possible to talk someone to death raising a smile, it does quickly set the store of the comic’s basic conflict perfectly well. Which makes the second half of the issue containing a flashback explaining all this again, with the only new bit of information being the Mini-Con ship crashed on Earth four million years ago, a poor bit of writing.

On Earth we’re into the condensed summing up of the cartoon. Which kind of hurts the new human characters as there’s little chance to properly introduce Rad (the Buster), Carlos (the O) and Alexis (the Girl One who is sensible and rolls her eyes at those wacky boys). Notably school bullies Billy and Fred appear for two panels to try and murder Rad and Carlos by causing a cave in on them as they explore a strange alien ship Rad has found without any sort of wider context as to who they are. Alexis also seems to just be hanging around the cave for no reason a few panels after Rad has firmly said she knows nothing about this. 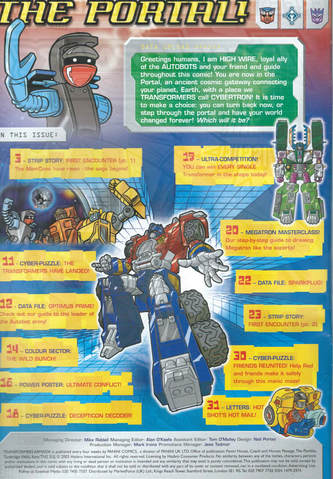 It's no Transformation.
The cave in reactivates the Mini-Con ship and has it send a signal to Cybertron as the Mini-Con Highwire appears and starts to talk to them in Japanese Katakana for some reason, before slowly getting a grasp on English and trying to say “We come in...”

Which, and you certainly can’t accuse this series of being slow, is where Megatron teleports in and you get the one moment you can imagine David Kaye saying as he completes the quote with the line I opened with.

What follows though is a flight sequence that depends entirely on Mitchell, and therefore fails entirely. This includes Highwire scanning a bike for a new alt mode (the first time this idea from the 2001 Robots in Disguise has been seen in the comic) and then changing into a weird three person buggy with a robot head. That suggests Mitchell has never seen a bicycle before.

So as Optimus Prime also arrives and he and Megatron start fighting by doing a lot of hand holding and more Mini-Cons appear to deliver the recap of things we’ve already seen, the issue ends rather weakly. Even the final panel being good for a “You’re home early” gag as Megatron is about to finish Prime can’t help it.

Luckily I know we’re in for some good stuff in the remaining British stories, but this particular relaunch is not off to a great start. 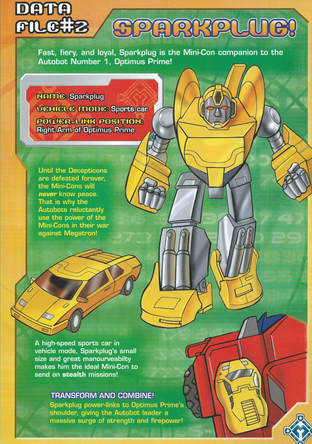 Sparkplug wants you to know his favourite position.
The comic itself is very much the Generation 2 approach turned up to eleven. Two things to note going forward is I no longer have any of the free gifts, so there will be some guess work there (this issue had the new Panini Generation One sticker album) and a lot of the features are double page spreads and I only have an A4 scanner, meaning they won’t be easily represented here.

We open with The Portal, an editorial hosted by Mini-Con Highwire based around what this comic is calling the Space Bridge. You can make a choice, you can turn back now or step through the portal and have your world changed forever. Most readers chose to turn back.

The Transformers Have Landed is a colouring puzzle that reveals Hot Shot, Data File 1 looks at Optimus Prime (poor guy, his age in unknown. Does no one care to celebrate his birthday?), The Wild Bunch is a colouring page of a battle scene and has a competition to win Street Action Mini-Con team if you name High Wire, Ultimate Conflict! is a poster with more Prime and Megatron hand holding, Ultra Competition! lets you win the bulk of the toy-line (but not all of it as The Portal claims, Hot Shot is the only Autobot on offer) if you can name the colour of the Mini-Con ship, Megatron Masterclass has the artist who can’t draw Megatron tell you how to drawn Megatron, Data File 2 looks at Sparkplug, Decepticon Decoder is a simple puzzle hosted by Highwire and Friends Reunited! Is a maze with the most 2003 name possible.

And that amount of padding... bonus content is going to be normal from now on. At least it will have kept the kids busier than the comic. 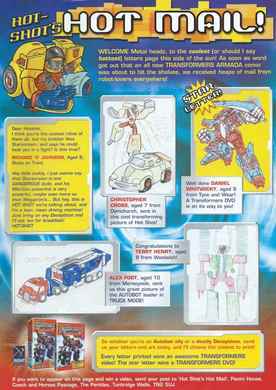 Not so hot.
The most infamous part of this issue though is the letters page, Hot Shot’s Hot Mail. Which features an entirely made up letter and art from names such as Richard “O” Johnson (combining the Marvel character with a dick joke), Chris Cross (who will make you jump, jump), anglicised footballer Terry Henry and Daniel Witwicky (you don’t need that one explained do you?). Leaving Alex Foot as the only non-obvious forgery.

The art at least is clearly by real kids, which makes no crediting them even if they were relatives of the editorial team forced to do it seems a bit dickish (though Chris has written his name on his art, so he might actually really be called that), especially as that would have stood out less obviously if they didn’t want to be caught pretending to send a prize out for best letter of a DVD.

Considering that, as mentioned, there was an assumption older fans would be reading, was this an intentional gag that whoever put it together thought people would get and laugh at? Possibly, but regardless of that, it starts the letters page off on a bad note from which it will never really recover.

Before we find out if the comic itself will ever really recover, what did happen between 1995 and 2003? 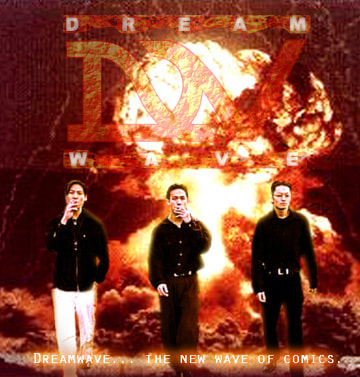