Bad Medicine is What I Need. 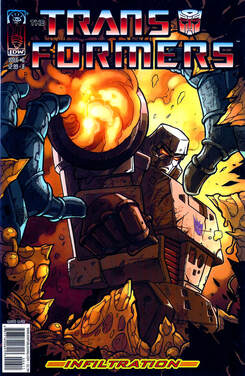 Now, what say we all take our fingers off the trigger and just let those two sort out their differences.

After the mess of issue 5, I went into this concluding chapter with something of a sense of dread. Especially as even Furman’s most ardent defenders will usually have to admit his conclusions are not a strength of his.

But pleasingly, things are much more focused and there’s very little irrelevance or diversion here. Starting with a page showing Astrotrain and Runabout watching Starscream’s super-fuel delivery chamber, whilst worrying about the news that Megatron has arrived and made short work of their pals.

Emerging in a full-page spread (that as noted when I discussed issue 5, would have made a great cliff-hanger) and a cloud of pink gas that makes you wonder what exactly is in his farts, Starscream declares they’re going to fight. After years of terrible energon substitutes, he has the power and Megatron is about to be history. 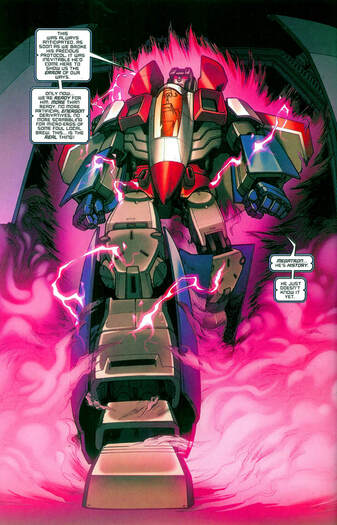 He's got legs.
And yes, Starscream has Megatron hang-ups. Which will be explored a lot in the years to come.

We then get our only real irrelevance of the issue, two pages getting the humans out of the plot as Ratchet drives them to the Ark (why? They’ve done their thing, send the poor buggers home) and Verity is initially annoyed that they’ve being side-lined. Hunter and Jimmy are taking their turn to act like normal people though, and are happy to be going away from danger and reassure Verity it’s OK to be scared.

As the trio were the story when the series started, it’s hard not to wonder if them being gotten rid of for nearly the entire final issue is down to that negative initial reader feedback.

Or, it might be a double bluff, making it look like their role is going to be downplayed, right before Hunter becomes massively important. But regardless, the other two are basically just going to just sort of be there for the remainder of their time under Furman, despite the series starting by treating Verity as The Important One.

With the deadwood out the way, it’s time for the main event. So as to focus on that properly, I’m going to talk about the stuff that happens around the big fight first.

Which is mainly Prowl: Competent Cool Guy. Starting with him leading his team to the super-secret Decepticon base as found by Bumblebee (Wheeljack’s avatar looks like it just shared the Cancel Disney Plus hashtag), rescuing ‘Bee from a couple of Decepticons who’ve stumbled across him. By offering a wry smile and suggesting they all watch the fight instead. 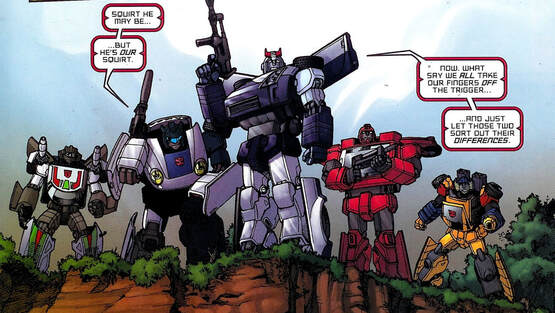 When Prowl was good.
How this Prowl ended up the way he did towards the end of IDW I’ll never know, but he’s an excellent subversion of how he initially seemed like Ratchet’s bad boss and the respect everyone has for him will be badly missed.

There’s also a fun moment after the smack down where Sunstreaker asks if they’re now going to have to fight Megatron themselves, only to be palpably relieved when Prowl says no, it’s time to regroup and have a think instead.

But the main event and centrepiece of the issue and arguably the entire six issue series is the Megatron and Starscream fight. 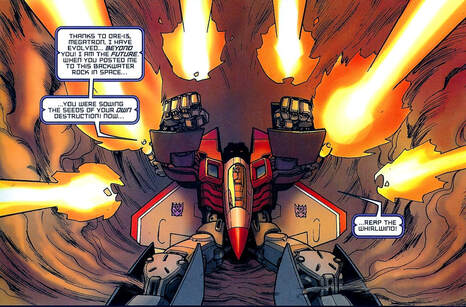 Just stop talking.
Which starts with Megatron using an “Orbital Bounce” (first naming of this continuity’s version of the Star Trek transporter. Briefly anyway, it winds up being forgotten about for years) to get to Nebraska, arriving and screaming “STARSCREAM” at the top of his lungs.

And yes, Megatron has Starscream hang-ups. Which will be explored a lot in the years to come.

There’s a lovely moment where the mooks come out of the base and Megatron just stares at them, before declaring “You will stand down” and making it clear there will be no mercy if they don’t.

It’s a strong demonstration of the sheer strength of Megatron’s reputation.

But Starscream is more disgusted with his colleagues than scared, and so comes out fighting, convinced Ore 13 will make the difference. 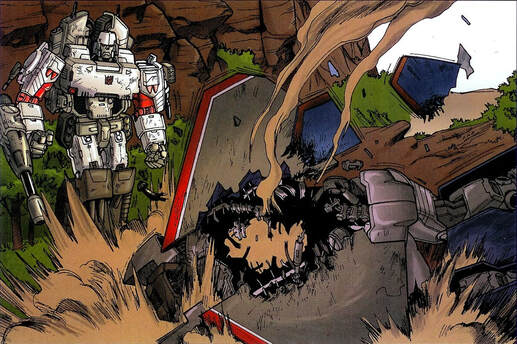 I think there was a hole in his plan.
And what follows is beautiful, with E.J. Su bringing his absolute A game to a magnificent battle that switches from air to ground fighting with pure glee.

It does show up some of Furman’s struggles with the Ultimates style though, as Starscream is explaining his motivation for hating Megatron—basically being given a nothing assignment he regards himself as being too good for (as mentioned before, a fine idea undone by later writers making nearly all the Decepticons here Super Important)—in big paragraphs as he’s fighting and shooting. Complete with Furmanisms (“Reap the whirlwind”).

Actually, it’s worth noting one key difference between this and his Marvel writing is that in those days, Furman just liked a few turns of phrase he reused a few times, probably without realising it. Now, he’s online and doing conventions and is aware people have spotted them and even given them a cute nickname. There’s going to be a lot more playing to the peanut gallery from here on in.

But, whilst it’s a shame that so much of the art gets covered up for what is a fairly straightforward motivation, Megatron’s side is much more impressive. Largely incredulous that Starscream thinks he has a chance, the Decepticon leader calmly shrugs off his best efforts (hilariously considering the Ores are going to be such a totem in later years, it makes almost no difference here) and winds up telling him to “Take your punishment like a Decepticon” and blasting a giant hole in him.

It’s brutal and nasty and the only real shame is he tells Runabout and Runamuck to take the remains in and if Starscream is still alive, tend to him. 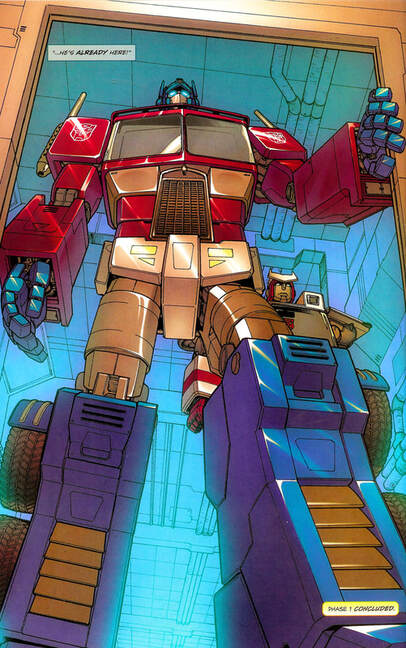 Crotch Prime.
Now obviously, there’s going to be a lot of interesting stuff with Starscream in the years to come. But in isolation, taken both as the sort of comic its trying to be and what it’s trying to say about Megatron, Starscream should have died here.

Or, at minimum, really learnt his lesson and not done anything dodgy for a very long time. Compare that to the American Marvel comic where, under Budiansky, Starscream tried something once, got badly twatted for it and them didn’t attempt anything again for four years and till after Megatron was officially dead.

Him living here, and almost immediately getting back on his bullshit as we’ll see, is a sign that for all this is trying to be a fully Noughties comic, the shadow of Sunbow is still very long indeed.

We then end on a bit of setup for the future. First, with the Autobots (having only hung around long enough to let Megatron dramatically say "PHASE 2" to them) returning to the Ark being seen by the Machination agents hiding by the lake as they watch the cars drive into it. Which is fairly straightforward, but which does have one nice clue for the future that Agent Drake knows the robots are called Transformers.

The final moment of the issue is a bit of a damp squib as I think most readers had predicted this was going to be the last page from about issue 2, but it sees Prowl declare they now do need to call Optimus Prime in, before Hunter (hey, remember the humans?) points out the big guy is already here, and we get what is at least a nice full page spread of Prime walking through the door.

Which is really crying out to be put into that WandaVision meme.

Despite a few bits that didn’t quite click, that was a nice strong issue to finish on. And repeats the pattern that the best issues are the simplest and most direct, which give Su the biggest chance to show-off.

And despite the near disaster of the fifth issue, that was a much stronger opening miniseries than I remembered. There have been wobbles, but overall it was a solid introduction to this new continuity.

But, there were enough loud angry fans for IDW, presumably unaware that there are always loud angry fans, to have the immediate successor not be the planned Escalation, but instead a comic that asks “Can you make all of the people happy all of the time?”. 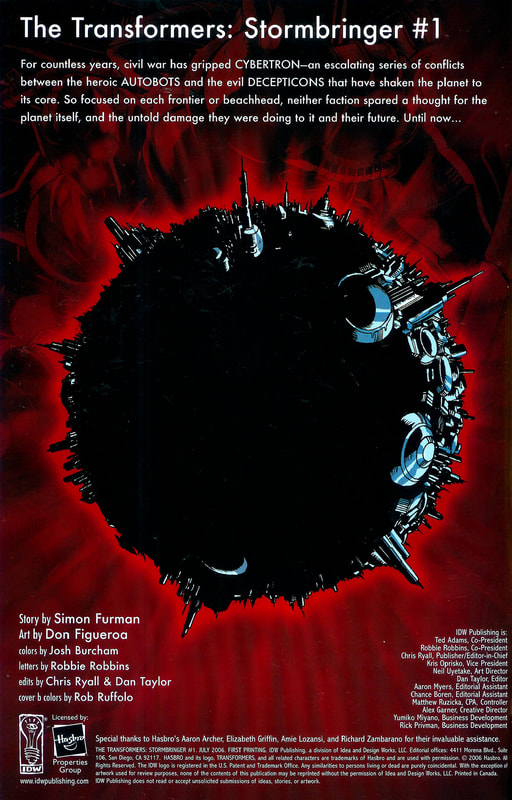