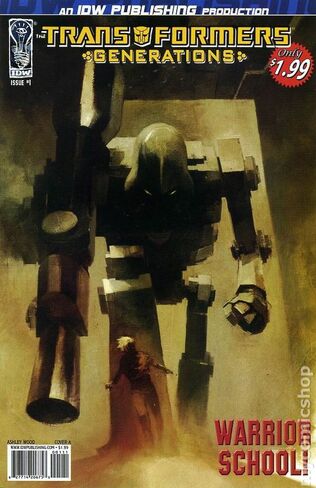 Cover style A by Ashley Wood. With a web-store watermark because finding decent sized scans of these is bloody hard.
Addendum 1: The Transformers: Generations Issue 1-12. March 22nd 2006-March 7th 2007.

And welcome to the first IDW Addendum, an occasional series where I look at things at least tangentially related to the main series, but which don’t really fall within its remit.

Starting with a short one that’s more an example of where the company’s mind was at during the early days. 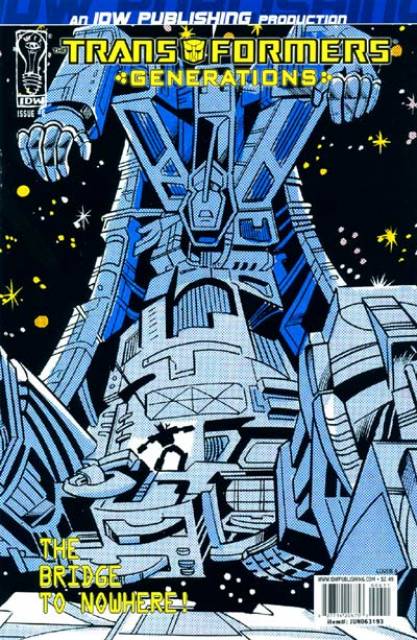 A variant cover with interior art.
One key difference between IDW and Dreamwave is that the former company was not 100% sure what the rights situation with the original comics was, and therefore was incredibly careful not to directly use anything created specifically by Marvel. Though you did have winks and nods like Ultra Magnus standing in front of a bunch of characters who had been in the Wreckers and saying he’s going to teach who they’re up against the meaning of the word “Wreck”.

IDW on the other hand had worked out that not only did Hasbro, and therefore they under the deal of their licence, have the rights to anything not directly copyrighted by Marvel (Death’s Head, Circuit Breaker and of course Spider-Man), they actually could reprint any of the original series issues that did not have those self-same elements in (though in later years they’d come to a deal that would allow them to do so).

Reprinting any of the Marvel series would seem especially pointless in early 2006 when Titan books had just about finished their extensive trade collection of the both the US and UK comics. With the issues IDW couldn’t reprint.

But it’s also clear that IDW had worked out they needed a minimum amount of Transformers content to make the licence work for them, so they quickly shoved out as many issues as they could grab from anywhere. Including that mentioned in the last piece Beast Wars series that was a quickly rewritten Dreamwave script and the Transformers: Generations series of Marvel US reprints at a cheap price.

IDW do have a good reputation for their treatment of classic comics, but this is something they will pretty much never apply to Transformers. The series of 12 issues (only the first six of which were collected in trade) is a clearly slapdash effort with no thought put into it. Rather than following a classic arc, they just seem to have picked two runs of issues at random that only accidentally hit on a beloved issue or two. And even something like Warrior School! is part of a run of issues that doesn’t really work so well out of context.

They don’t even have the sense to do issues Titan didn’t reprint, like Man of Iron, that could have been a unique selling point. It’s literally just a way of making money as cheaply as possible and with as little effort as possible. I suspect it only lasted 12 issues because many people, like me, just had a general Transformers standing order at their comic shop and it was easier to pick up everything than confuse the people who work there trying to be specific. 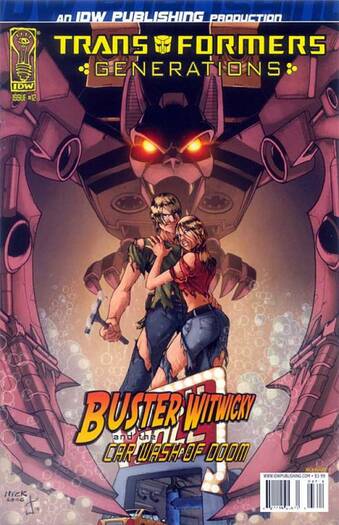 Slightly cheeky to call it an IDW production.
About the best thing you can say is that this series used the original colours rather than the atrocious “Remasters” that are now standard.

And it would be followed by various other similar wringing every penny out of what they had the rights to. Such as a Transformers Magazine that lasted four issues and also included Dreamwave material and various Best of UK miniseries (you’ll note that recent reprints of Target: 2006 has a next issue box in the wrong place, a holdover from that story having an uneven number of parts to fit neatly into American style issue and the editor was ham-fisted in trying to hide the one split into chunks).

They’ve also traded the Marvel series in numerous forms, most infamously collecting the entire US run without the issue featuring Marvel owned characters... and then almost immediately doing it again once they’d come to a deal with Marvel to feature them.

Sadly, the material having been collected in so many forms and so recently likely played a part in the death of the Classics UK books that have been much discussed on this website in the past.

What’s most interesting long term about this series though is that Nick Roche does a cover for every issue. He’d done some for Beast Wars and had of course introduced himself with the Chrischarger letters page art, but he’s clearly someone the higher-ups have plans for and are cultivating.

And if nothing else, it means you get a Nick Roche Buster Witwicky and the Car Wash of Doom homage.

All he needs is a project to do interior art on. And that will come along very soon.

But that’s in the future, next week it’s the ending of the opening salvo for IDW as Infiltration concludes.