Made of Oak, Made of Ale, you are the Real Alpha Male. 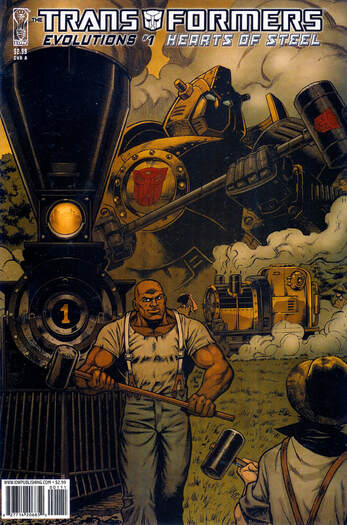 
Submerge yourself in that lad!


Here we come to the first real oddity of this project, a main continuity book no one knew at the time, or for many years afterwards, was part of the main continuity. Indeed, a book for which the USP was that it wasn’t a part of it.

We’re a good long way from covering the retcon that means this isn’t really a comic about Bumblebee and Optimus Prime (I wonder if anyone ever told Chuck Dixon he never really wrote those characters), so for here and now I’ll be discussing each of the four issues as they are. If you’re unfamiliar with how things are going to go, that’ll leave you with a lot of questions, but stick with me and things will become clearer.

Or rather, more baffling and confusing. Which is the main reason to leave tackling it until I have to. Just note that the retcon was so late in the day, IDW have never included it in their hardbacks collecting the core series.

At the time, this was printed under the full title Transformers Evolutions: Hearts of Steel. Evolutions being intended to be the Transformers equivalent of What If? or Elseworlds, an ongoing series of new alternate timelines.

But, despite being successful enough to get two direct sequels and to be absorbed into IDW canon, this would be the only Evolutions story. 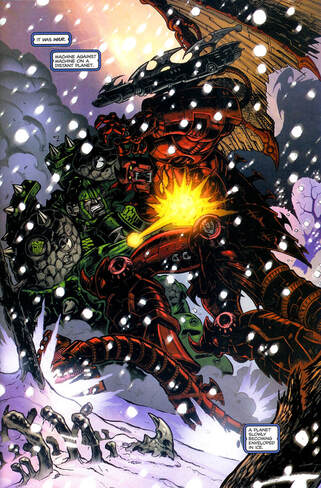 Not the alternate modes you were expecting.
Which is overall a good thing, Transformers already had myriad timelines and the only thing people can generally come up with for “What if?” style stories is “What if they woke up at a different time and turned into different vehicles?”. Which is exactly what this book is.

Considering how early it comes in the IDW run, and that the only other comic they’d done at this point was Beast Wars, a Dreamwave script given a polish, I’d suggest work on this started incredibly early and was more motivated by the writer than the concept.

Chuck Dixon isn’t a huge name, but he had written a lot of Batman (which, as we’ll see, is enough for IDW to promote you as superstar) and was about as big a level as this property was likely to attract at the time. I would put reasonable money on him having first approached to be the main Transformers writer when they first got the licence and were sounding people out before settling on Furman. And when that didn’t work out, but still wanting him to do something, the Evolutions concept was worked out backwards from what he wanted to do.

Originally indie darling Ted McKeever was announced as artist, but he eventually passed and made way for Dreamwave refugee Guido Guidi. Who is second only to Alex Milne as the IDW workhorse and, as of 2021, has been working on Transformers longer than any artist to have come onto the franchise in the 21st century.

Despite starting with some excellent work on the DW Armada comic, he’ll become pigeonholed as the super retro-G1 guy, meaning he’s going to be stuck drawing a lot of bad comics. Here though, he gets to bring his talent to a full-on steampunk reimagining of the franchise and show off how much his imagination was often wasted in following years. 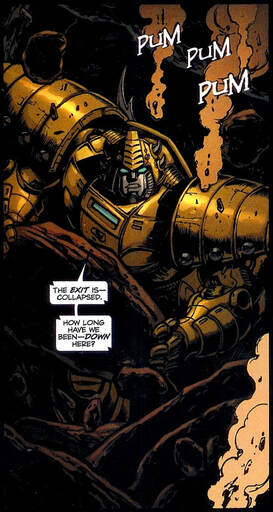 Who says bees are going extinct?
All of which is quite a long preamble to get to the fact there isn’t a huge amount to say about the issue itself, which is mostly the above mentioned “They wake up like normal but turn into different things” story.

Though there is one fun curveball for a comic promoted as steampunk, as it opens with a page of Beast Warriors, millions of years ago on Earth. I’m actually surprised at how little I remembered about what comes later when I reread this, so I can’t be sure if this is the case, but I like the simplification of the implication the Transformers are ancient Earthly creatures. No wonder the first sequel is a Lovecraft story.

Eventually these warring animal robots (all of whom are recognisable despite the drastically different looks) run out of energy, so the one side, that we would call Autobots, go underground to sleep.

Then, epochs later, Bumblebee (a literal bug) is woken up by an Earth tremor and decides, before waking up Optimus Prime, to go check out the surface. And finds an unrecognisable planet and a 19th century railroad being built.

So far, so familiar bar the time period. The more interesting thing about this comic is how it merges real historical figures with modern mythology as, at the front of track and hammering down railroad spikes, is John Henry. And not the likely real and ordinary John Henry, but the icon of song who impresses his colleagues with how much hammering he can do. 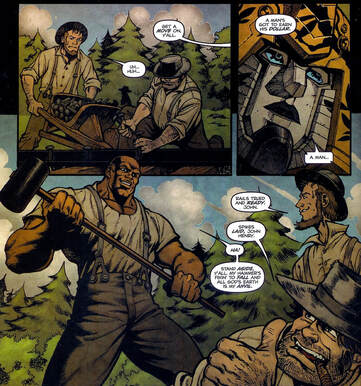 Hammer time.
I don’t think the John Henry story is so well known outside the US. The first time I’d encountered it was in the 90’s BBC radio adaptation of the death and return of Superman, where its influence on Steel is carefully spelt out. And frankly, I’d forgotten it by the time I read this issue and didn’t realise the first time this wasn’t an especially created for the comic character.

But once you know, the idea is good fun and Bumblebee is clearly impressed by this organic being called “Man” out to earn his dollar.

I’m not sure how Bumblebee speaks English, but as he’s a prehistoric animal robot being, you might as well roll with it.

Over in San Francisco Bay, the steam ship Enterprise is host to Mark Twain and Jules Verne. With the name of the ship of course being a gag about Twain having been in a two parter on The Next Generation. Though I guess the writer of the Wiki article on this issue never saw it as it’s not mentioned there at all.

Oddly, Time’s Arrow was also the inspiration for the “Out of sync” aspect of the Beast Wars comic (which I already reviewed when it was reprinted in the UK FILM COMIC), so it’s clearly a more popular story than I thought. 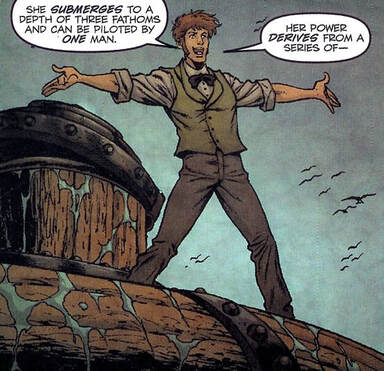 Images before an unfortunate event.
Though there’s more of an inspiration from Trek than Mark Twain teaming up with a robot to save humanity, one of the gags in that story is Jack London has a small role where he gets inspired to write Call of the Wild. Which is the same role the otherwise irrelevant Jules Verne fills here, as he and Twain have been invited to see a demonstration of a submarine (I’m sure some history buff can work out the year from when Verne would have been in America before writing 20’000 Leagues Under the Sea).

The submarine, the S.S. Vicuna, is a prototype invented by the after funding young inventor Tobias Muldoon.

Who turns out to be a terrible inventor as the little wooden submarine just sinks to the bottom, leaving Muldoon floating and embarrassed. With the boat itself lands on a sleeping Decepticon, Skywarp.

It is a mighty coincidence that both sides are coincidentally woken up by different things at the same time, but perhaps the increased disruption of the environment by mankind was always going to have it happen around this time.

On the Enterprise, Mark Twain is asking Troi about that blue fellow and...

No, wait, Twain is helping himself to a brandy whilst Muldoon is facing the fact he’s ruined by having put all his money into a project that’s sunk. 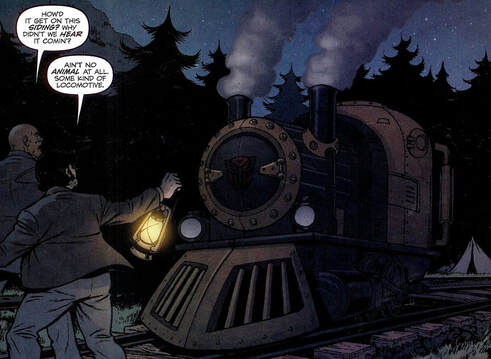 He cho-cho-chose you.
Back at the train track, John Henry is also worried about the future as his colleagues are excited about the idea of a machine that could do their job for them. Which angers Henry as it’ll put them out of work.

Again, I can’t remember anything about his arc, so it’ll be interesting to see how this luddite approach goes as he meets Bumblebee properly. Hopefully, it won’t be all Star Trek: Insurrection. Though he’s cheerfully ignoring that he only has a job in the first place because of industrialisation and it’s rather churlish to demand it stops at the point it conveniences him.

Bumblebee is still impressed though, and rather than listen to Prowl’s suggestion they should not wake up Prime and instead go back to sleep for another 100 years so the humans can become more advanced, he slips down to the track for a closer look. And, upon risk of discovery by the workers, becomes a little yellow steam train. Without a driver’s cab, which puzzles John Henry.

Back in San Fran, Muldoon is taking another investor (who we’ll learn is called Stanford Merriweather) and his daughter Kitty to lunch at Merriweather’s hotel. Despite Kitty and Tobias clearly having a thing for each other, once Stanford realises the inventor is broke and can’t afford to pay for the meal, he makes him do $40 worth of washing up in the kitchen. 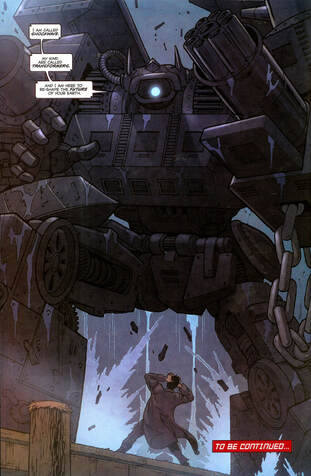 Making waves.
Which, in late 19th century money, must have been a bloody expensive meal.

That leaves Muldoon disheartened as he later takes a walk by the dock. But a voice that sounds like its talking through a bellows offers him his service to explore all that is possible in this world. As suddenly a warship turns into Shockwave, who is here to reshape the future of Earth.

Which is a striking splash page that ends an issue of strong art on a high.

Despite the plot being straightforward Transformers 101, I rather enjoyed that. Not being sure what actually is going to happen next wound up making it feeling fresh and there was some good comedy from Twain being an ass and Bumblebee just ignoring Prowl.

It’s not Earth-shattering stuff, but it’s amiable and fun and thankfully is different enough from Infiltration so as not to feel redundant to have two “Transformers meet humanity” stories running at the same time. And I’m genuinely interested as to what is going to happen next.

But before going forward, a quick look at how IDW deal with a different sort of history to the 19th century in their first attempt at a Marvel reprint.