I'm Fixing a Hole Where the Rain Gets in. 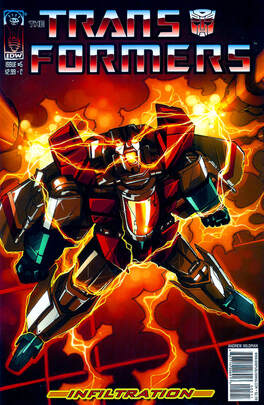 I’m ready for my medicine.


Well, this is definitely an issue of two halves. One below ground, and one above, with similar levels of quality.

To skip a little into the best part of the first half... There’s a fantastic payoff to Verity having come face to face with Megatron where he looks down at her with utter contempt and then, gets back to what he’s doing. She is utterly beneath his notice. As part of the overall aim to make Megatron scary again, this gets things off to a great start through minimalism. He’s only going to give a damn if you’re either on his level or you really piss him off.

Which someone does quite unintentionally as Blitzwing and Skywarp bomb the base.

Which is where the lag hits. 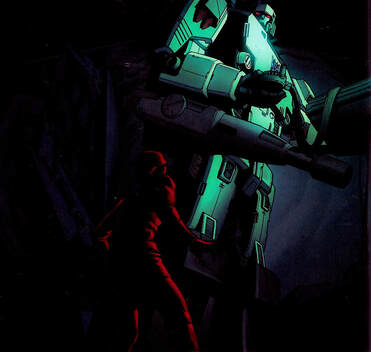 When the kid walks in on your work call.
The issue does open with a nice full-page spread of Ratchet, flat on his back, with tank tires over his body as Bumblebee checks if he’s OK.

Once it’s established he is though, a disproportionate amount of the issue is devoted to the humans climbing back up the rope before the entire thing collapses. Even if you ruthlessly discount pages not directly related to it, seven out of the 22 are given over to this.

And it’s pure, hammy, melodrama as Verity gets to the rope slightly behind the other two meaning Hunter and Jimmy suddenly start doing dramatic “I’M GOING BACK FOR HER” (though at least Jimmy points out the stupidity of doing this when they’ve only one winch to pull up just one person at a time) and “VERITY IS SPECIAL”.

Now Jimmy, you’re either 17 or 18 depending on the issue. Verity is probably 15, no more than 16. Even ignoring that it’s internet groomers who call teenage girls “Special”, this is verging on pulling out a Romeo and Juliet card level territory. Which goes to show Furman is doing his best to ape internet speak but has no handle on it.

"She's so mature for her age"
It’s also pointless as Verity arrives just in time (and oddly quippy for someone who was so terrified at the sight of Megatron a second ago), and everyone gets out despite a doomed effort to try and make us think it’s too late. Jimmy hopes what they got was worth it. Though in terms of convincing Prowl to take action, everything they’ve done is rendered pointless by Megatron bursting out of the ground after the base collapsed on top of him. A level of threat Prowl can’t ignore.

Amidst this, we do get one good page at the new Decepticon base in Oregon. Where Astrotrain is reassuring Starscream that the new stream of “Ore 13” they’ve found is even more pure than that in Nebraska.

Leading to a great panel, one that marks a transition from the Transformers being seen from human eye level to from their own perspective, of a gleeful Starscream being ready for his medicine.

Back in Nebraska, Skywarp and Blitzwing are glad to be done with their clean-up mission. Though Blitzwing thinks they should have done the bunker first, as what they did there was wrong, and that it felt like they “stopped being Decepticons”. Though we’ll never hear of anything having happened there that really fits that sort of self-angst. 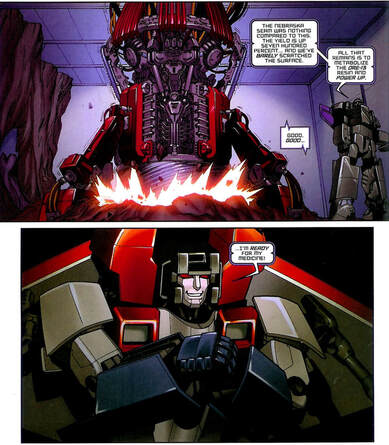 Note the shift in perspective between panels, from human level to Starscream level.
Which is where Megatron emerges. And it turns out his presence was a complete coincidence; they not only were not planning to try and bury him they’re completely shit scared of having fucked about and now being about to find out (as the kids say).

So, we not only get a glorious action sequence of him taking both out very easily, there’s also some genuinely funny comedy as both Decepticons try and beg their way out of the fight once they realise what they’ve done. With Blitzwing especially getting a lovely resigned “Oh well” once he knows words won’t cut it and he’s going to have to do his best.

His best being Megatron shrugs off his tank blast (that floored Ratchet last issue) and ripping his barrel off before beating him with it. Compared to that, Skywarp got off lightly with just a hole being shot through him.

I love this old and tired of crap take on Megatron, never displaying overt emotion beyond being annoyed at “How quickly they forget”. He only starts to show real anger as his face twitches when he names the main trash he needs to take out now: “Star...Scream”.

Which brings us to a slightly odd last page. Indeed, though the scans I’m using are of the original issues, I’m writing this from the Hachette trade that makes no distinction between chapters. And as such, I had to double check this was indeed the end rather than two pages into the next issue, which is a huge dramatic full spread that screams “Cliff-hanger”. 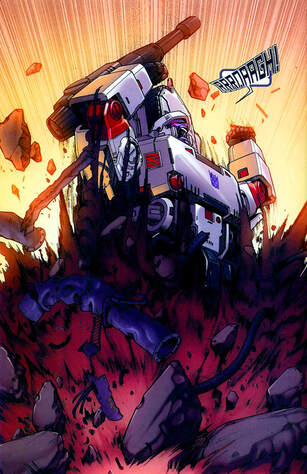 Always good for a full page splash is Megatron.
The actual ending is simply Ratchet phoning in his findings to the Ark, and Ironhide confirming they prove the Decepticons have found some sort of amazing new energon, making them break protocol and now Megatron is here personally to sort them out, with the Autobots stuck in the middle.

Which is fine as exposition. And that what makes Earth special in this intergalactic war is the fuel you can get here is a nice and simple idea (though one that will get a lot of needless baggage added to it over the years). But it also reads more like the opening page of an issue than the end, handily recapping everyone’s motives before diving into the finale.

This is, overall, a bit of an odd one, and the first issue to be really like what I remembered this series to be on my last reread. The stuff that works, the Megatron smackdown, is great and looks gorgeous thanks to the ever-impressive E.J. Su. Who also pulls off the perspective switch on how we’re viewing the robots so subtlety you barely notice it.

But, the pulling people out a hole stuff takes close to half the issue and is incredibly lopsided in how much attention it gets in relation to its value, with terrible writing for Jimmy and Hunter as well.

I wonder if, originally, some of the stuff that is going to be in the hastily cobbled together Stormbringer was going to be covered here (such as seeing some of the other side of Megatron’s conversation), and when that got switched over to the new series, there was nothing to fill the void. 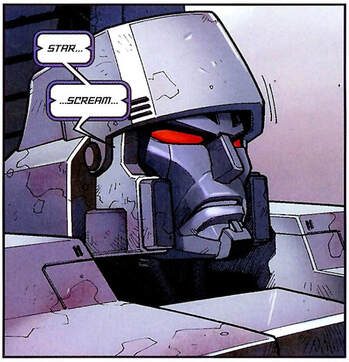 Find someone who says your name with that passion.
The result is the issue I’ve written the least on so far, which is nice for my fingers, but does badly undermine the momentum of the series right before it concludes. Can issue 6 pull it back round?

Well, we won’t find out immediately. Because of the plan to cover the IDW era in original release order, the five straight issues of Infiltration are as many in a row from one series as I’ll be doing, as the wider Universe starts to expand from this point on.

But in this case, no one knew that the Universe was expanding at the time. Join me next week for a very strange tale, in more ways than one as Hearts of Steel begins. 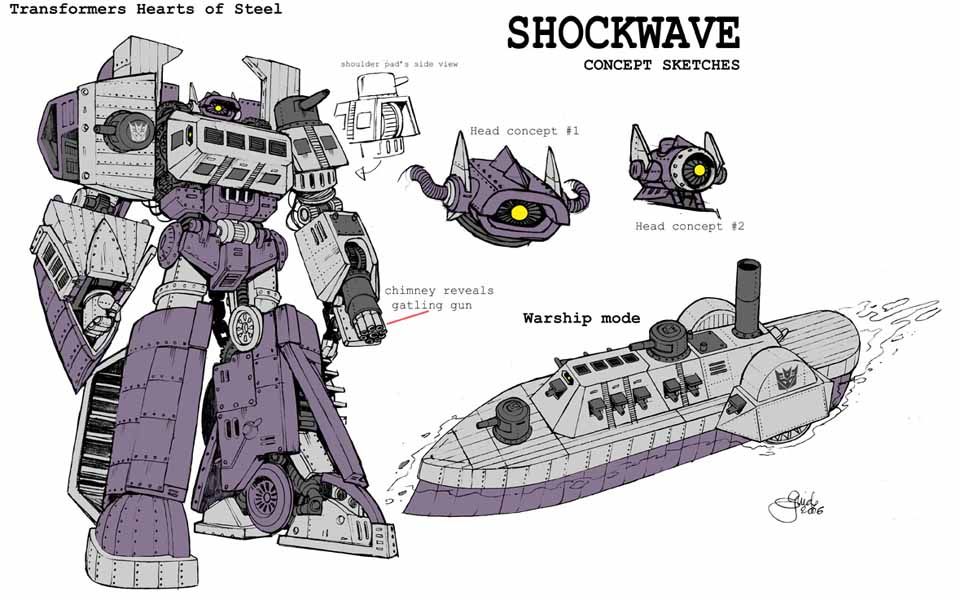