You’re Not Fooling Me, Cuz I Can See, the Way You Shake and Shiver. 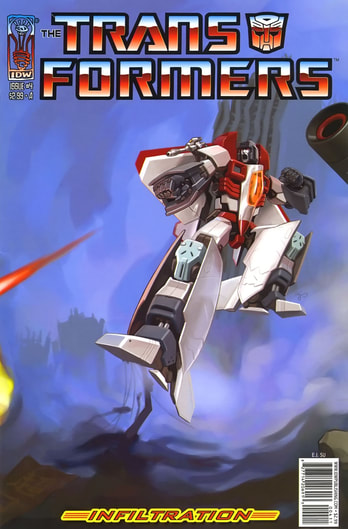 
I’m definitely feeling at this point that, for all my talk of writing for trade, this is indeed a series that works best read issue by issue. Something most notable with issue 4 as it’s, albeit awkwardly, structured with a beginning and end that call back to each other and focuses on the character of Verity. For what I think might be the last time before she starts to fade into the background.

This includes an opening page set “Three years ago”, where the immediately striking thing in terms of the “How old is Verity?” question, is that she’s clearly drawn as a child. Looking even pre-teen. I’d absolutely say she can’t be older than 15 in the present based on this, making that “Sexy loner lady” letter in issue one a lot more worrying.

Young Verity is in the office of an incredibly unprofessional social worker, telling her, with deep frustration about their failed attempts to foster the young girl and she doesn’t believe in the official report saying Verity is “Uncommonly bright... with deep socialisation issues”.

No, Verity just thinks she’s better than everyone else, but is really dealing with a world of hurt and pain. 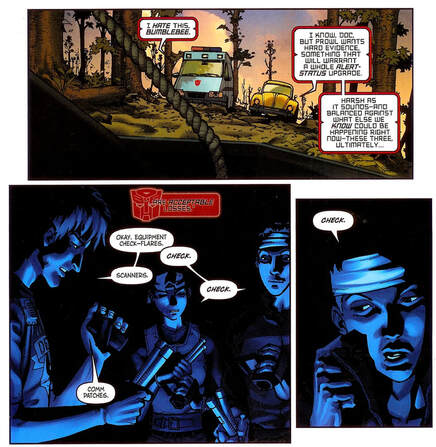 Children's favourite Bumblebee.
No wonder Verity keeps running away if that’s the help she’s getting. The social worker has a Shockwave mug on her desk, which just about sums up her attitude and is, perhaps surprising, something John Barber wouldn’t go on to explain later.

Despite being placed front and centre, it will take another 12 years before Verity’s family background gets explored again, it just being used here to cut to the present and provide a contrast with her being lowered into the Nebraska bunker, pretending to be fine whilst clearly scared.

Up above, before they go down and join her, Jimmy and Hunter are getting a final prep-talk from the Autobots’ avatars that they apparently didn’t have time for on the drive to Nebraska.

Ratchet, admitting that he doesn’t know how he was talked into this (always a sign of good writing when characters admit they don’t know why they’re doing what they’re doing), and Bumblebee emphasise that the place will be full of booby traps, so be careful.

Thankfully, there’s also a line explaining that the security measures work against the holo-avatars, neatly dealing with the most obvious solution to the problem. 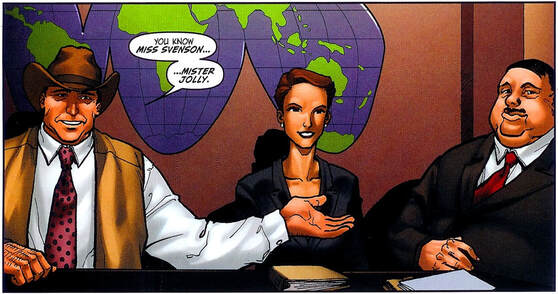 Why does Mr. Jolly look like a fat Hitler anyway?
Once the humans are out of earshot, a conversation between Ratchet and Bumblebee sets out the intended arc for the Autobots across the series. At this point, they’re too distant from the people and worlds they’re trying to protect and have no investment in them beyond stopping the Decepticons.

So, it’s a smart choice to have it be Bumblebee, the traditional mascot character, being the one to say that this is the best way of getting hard proof and that, harsh as it sounds, “These three are acceptable loses”.

Sadly, what was presumably meant to be a gradual realisation for the Autobots will wind up being more forced and a couple of years from now, Bumblebee especially will be a totally different character with no through-line between the two states.

The logical problem, one of the logical problems, with the actual plan is immediately apparent once all three are inside and Hunter has to admit the place is so large there’s no way they can explore even a part of it without splitting up.

Considering the Transformers scale means it’ll probably take a good hour for them to reach another wall, now is a good time to cut away to Dallas, and what is now called Machination headquarters.

By this point, Furman clearly knew there was definitely going to be more, and so we get some setup that won’t pay off to the next main miniseries. A Mr. Dante (fat and in a Stetson hat because Texas) welcomes in a Mr Drake, introducing him to Mss Svenson and Mr Jolly.

Plus, Drake’s “Usual team” of men in suits. 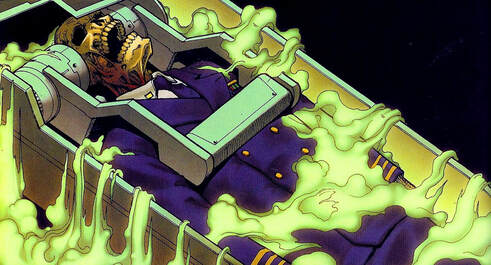 "All she left me was my bones"
Jolly then explains about the recent wave of destruction caused by Blitzwing and Skywarp, and that this means their “Visitors” are stepping up their plans. But they have a homing signal thanks to the dead guy on the bus. Which is described as coming from “Beyond the grave”. This came out just before the Cybermen returned to Doctor Who, but if you’re like me, you can’t read that line without hearing it in Trigger’s voice.

This diversion does show up some of the flaws in Furman’s long-term plotting, Drake and Dante are the only characters who are going to actually do anything going forward, and as Drake is a goon, the effort to introduce everyone by name seems a bit pointless. Especially when the names are fake sounding enough that many fans assumed they were intentional pseudonyms. Something that will never be confirmed, but then, this is the comic with Jimmy Pink.

Back at the base, after some humour with Verity pretending to be a news-reporter as she walks about with her camera, Jimmy points out one of the other big flaws in the plan, they’ve no idea what is important and what is the giant robot equivalent of “Snappy Meal cartoons”.

Luckily, Verity finds a blatant clue, a series of human sized glass tubes. Despite being told not to touch anything, she does. And one opens, revealing the rotting corpse of a man in a high-ranking USAF uniform. The first hint of a major plotline that will not get any payoff whatsoever as things get changed and compressed along the line.

Verity continues her trend of being the only person to act like a real human in the book by understandably freaking out, but she remains determined to keep exploring. 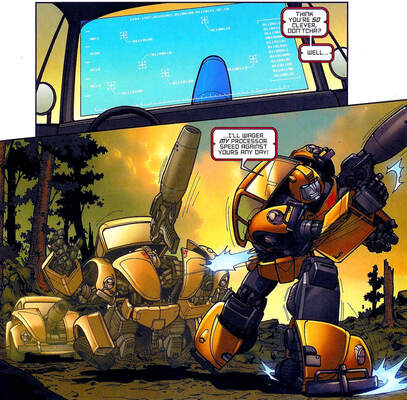 Sexy as fuck.
Up above, just in case people thought they were reading too much into the lesbian subtext last issue, Bumblebee is now quoting Willow from Buffy (“Bored now”), which is at least closer to a hip young thing in 2006 than The X-Files. I also like the possibly unintentional implication the humans have been down there for hours.

Luckily for Bumblebee, some excitement comes in the shape of Blitzwing and Skywarp attacking. With the Decepticons being hilariously not bothered about why Autobots are there.

The fight that follows is E.J. Su getting to show off what he does best and looks stunning. It’s also the first time we get to see how well he draws transformations, with a wonderful sequence of Bumblebee changing from Lesbian Volkswagen to robot, producing a gun from his insides, that’s fantastically fluid.

Oddly, it does feel like Furman has a lack of faith in Su’s ability to carry the story that wasn’t there in previous issues, as there’s a huge amount of talking from the two Autobots as they fight for their lives, explaining what they’re doing (Bumblebee firing off lots of shots to counter Skywarp teleporting, Ratchet blinding Blitzwing with his headlights) that the story doesn’t really need.

Indeed, if Ratchet had spent less time talking out-loud to himself, maybe Blitzwing wouldn’t have had chance to recover from being blinded and to change to tank mode. Blowing a big hole in Ratchet as he does so. 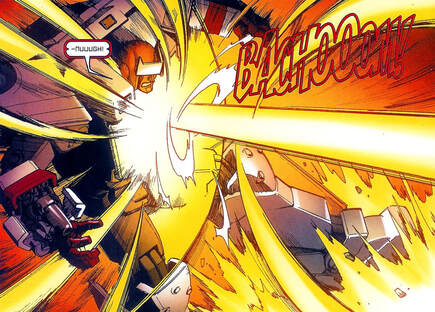 He will never learn the lesson of just shutting up.
Back below, Verity ignores the pleas from Jimmy and Hunter to come meet up and that it’s OK to be scared (Jimmy compares himself to Scooby-Doo, because of course), but still ploughs on. And comes across someone having a conversation over SPACE Zoom.

Who looks down at her with complete contempt as the words of the social worker that opened the issue ring through her head.

Which doesn’t quite feel like an earned call-back, but the visual is so arresting it doesn’t matter. Holding off on the big boys is always going to be a risk, but Su makes it worth the wait.

The main thing to note though, is that Megatron is having a conversation we’ll see the other side of in Stormbringer in a few months. That being a comic that wasn’t even conceived of when issue 0 came out. I’ve mentioned a couple of threads in this issue that won’t actually go anywhere, and that’s because the wheels are already turning to change things following the negative reaction to the opening. 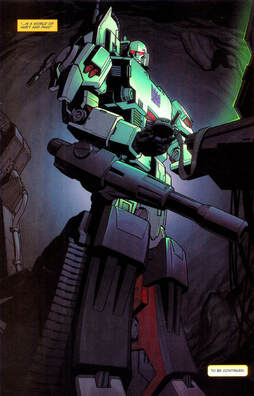 The tall vampire lady from Resident Evil.
Now, Furman remains adamant, like almost every writer we’re going to see get screwed about, that he still told the story he wanted to tell. And I think that’s a fair, letter of the law, kind of truth. This isn’t Babylon 5 where the entire thing is planned out in exact detail 5 years in advance. Especially when no one would have been sure how many different series the line would be successful enough to sustain when it started (though clearly the intent from IDW was always to milk it, Beast Wars and their range of Marvel reprints had already begun).

So, Furman’s plans understandably would have had a degree of elasticity to them. But that elastic is already being stretched hard to the point of being close to snapping before the big outside constraints even kick in.

The big flaws in this issue come from knowing what happens afterwards, which plot-threads are going to go nowhere.

But, if you can tune your memory out from that, it’s only really the needless verbosity in the fight that isn’t great fun when you take it as an issue by itself. The art remains gorgeous, Verity continues to be a better character than I ever gave her credit and both the corpse jump-scare and the Megatron full page spread are beautifully done.

The wheels may have been loosening behind the scenes, but that they’re coming off isn’t apparent yet within the comic itself.

Next week: A grumpy old man.