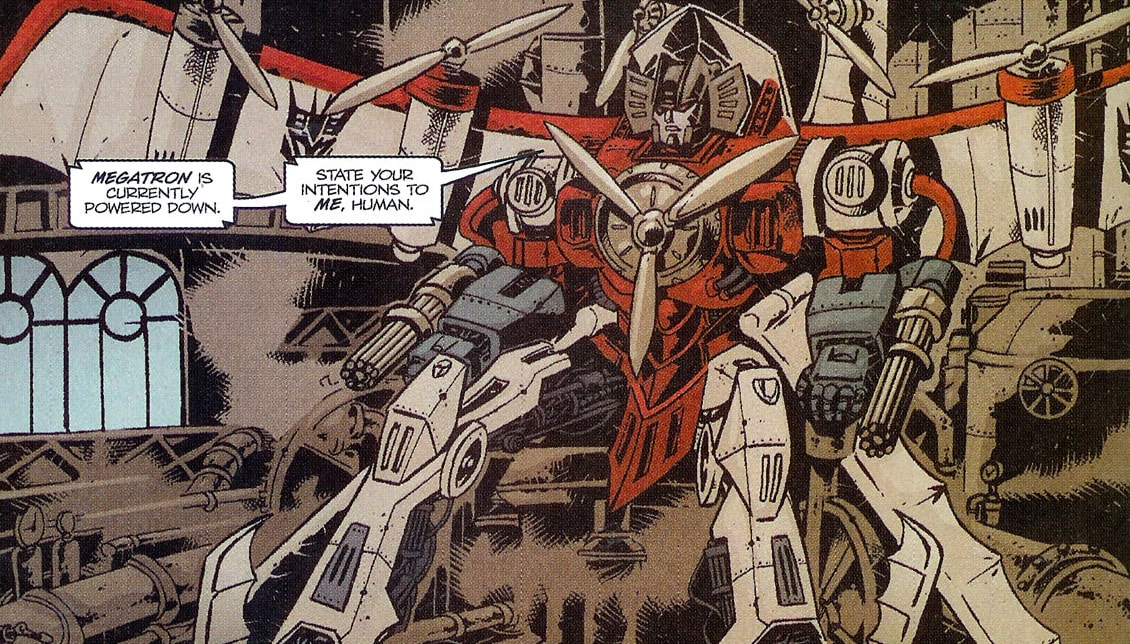 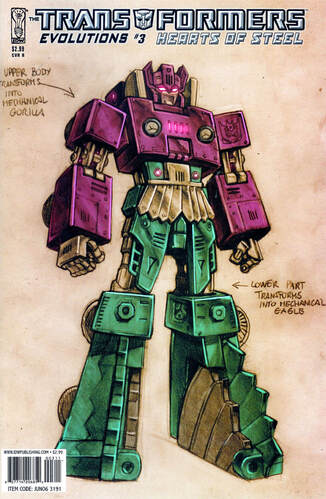 For myself, I plan on enjoying this fine cheroot.

We open on a lovely atmospheric sequence this issue, of a stage coach driving across Death Valley, looking for... something. Which it finds in a double page spread of a massive, terrifying Rumble (or possibly Frenzy, they go unnamed) looming over it and ordering it to turn back.

It’s a stunning image, though perhaps Guido Guidi won’t thank me for saying I was immediately put in mind of the classic Will Smith music video Wild Wild West (don’t mention the film). Which actually made something apparent to me that may have been more obvious to older Americans than a Brit, which I’ll talk about shortly.

Unfortunately, this does lead to some rather blatant padding as the coach belongs to a Colonel Saunders looking guy called Jacob Lee Bonaventure (named for the Transformers film series producer Lorenzo di Bonaventura? Work was well underway on the first by this time). Who is the boss of the railway manager who wanted to find out where Bumblebee came from, his investigation having led him (somehow) to the Decepticons.

Bonaventura wants to make a deal with Starscream, who in turn accepts because he wants their activities to remain secret, so he feeds the human the same line he fed Muldoon about raising humans up with a technological deal. 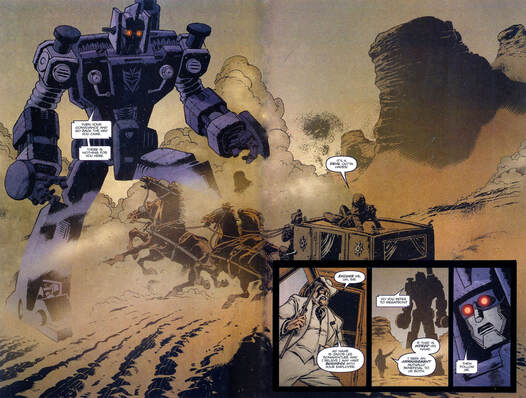 "To pass you must answer my riddle... WHAT COLOUR AM I"
All of which seems completely pointless as the Decepticons clearly have no interest in secrecy at this point, what with their bullion raids making the papers and a giant purple robot walking around Death Valley ordering anyone who appears to turn back. It’s entirely possible that there’s something I’m forgetting in the fourth issue that will make this feel more relevant that adding to the “Capitalism is bad” message the comic is already selling well enough, but right now it does rather feel like a way of dragging out the plot to four issues.

The only real relevance is that Starscream works out from the description of the yellow train that Bumblebee, and therefore the other Autobots as well, is up and about. Though as Bumblebee does a sneaky reconnaissance of Death Valley later on, it would have been just as easy to have him be seen then.

We do at least get our first glimpse of The Astrotrain, who turns out to be a specially built big purple thrusting juggernaut rather than the Decepticon we all know and love. 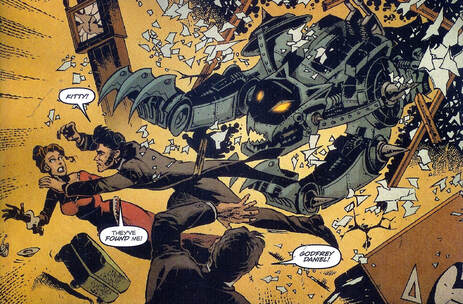 Faster pussycat...
Back in San Francisco, Muldoon is barely able to convince himself of what he saw, let alone anyone else. Though Mark Twain is at least open to the idea that the boy could have seen something beyond his comprehension.

Luckily, proof is offered almost immediately when Ravage bursts through the wall. Meaning the name of Kitty is nothing less than a pun, to have Kitty and the Catty on page together.

This gives us a fantastic sequence of Mark Twain Vs a Transformer, which he actually wins as Ravage has burst the house’s gas pipes, so, once the human’s have fled outside, all it takes is one ember from Twain’s cheroot to blow the whole place up.

And now, with proof, Merriweather brings in the literal cavalry by going to telegraph the president. Which is a pretty big personal connection for a hotel manager to have. 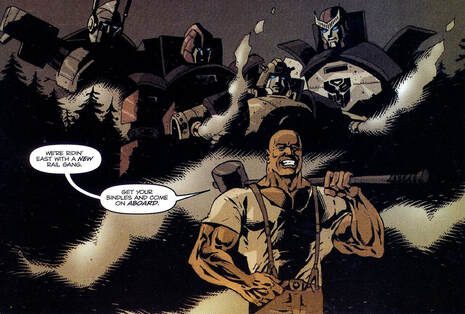 They can't see the bots for the trees.
As Starscream, now knowing about Bumblebee, order Squawkbox to contact all the Decepticons (something I only mention because it’s Squawkbox. Presumably a Guido contribution as it’s hard to imagine Dixon would have pumped for such an obscure character. Squawkbox also makes one of the covers), the yellow train carries out his spy mission and returns to camp to say goodbye to John Henry.

Henry himself is having to put up with the other lads singing one of what will become famous folk songs about him, which may be why he’s so keen to help Bumblebee instead. Rousing the sleeping workers, he declares they’re about to join a new rail gang to save the world.

At Death Valley, the aforementioned literal cavalry arrives and find the Decepticon base abandoned. Which is one of the things that make the subsequent absorption of this into canon very silly. This isn’t an isolated event that very few people saw, the US government is actively working to fight the giant robots. If this were happening in the same continuity as Infiltration, it wouldn’t have taken over a decade to be mentioned. 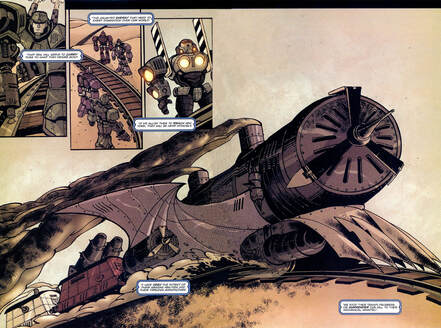 Just a normal train being normal.
On their own train, Muldoon and Merriweather and Twain are working out the Decepticon plan to drive on into New York. Which is a simple sequence, but does make one of the influences very obvious. In the Wild Wild West TV series (and yes, the film), the steampunk heroes work from a train with a similar office and working area setup.

This has never occurred to me before because that show never made much of an impact in the UK (and I suspect the film buried any reputation it had in the US), but that series was one of the first (and certainly the first mainstream) examples of steampunk, so it’s hardly surprising that it would be an influence on a similar time and place story like this.

Though luckily there’s no scene of Mark Twain asking Muldoon to feel his fake breast.

And their guesses turn out to be correct as we get another fantastic double page spread, this time of the Astrotrain ploughing on its way, with the Decepticons laying track as it goes.

But the issue actually ends on a heroic note, with the Autobots steaming to the rescue, with John Henry’s crew now adding Bumblebee to their song. 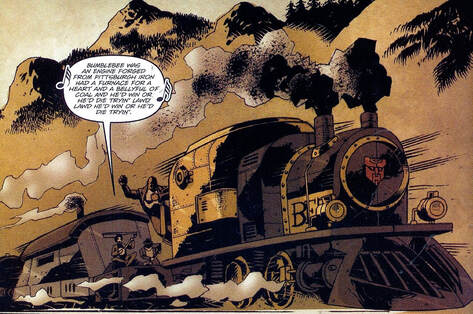 This is definitely the comic for you if you like trains.
I’m not entirely sure about sticking Bumblebee into a folk song about a black legend. Which is also as good a point to mention that the crew are entirely white apart from Henry, with no sign of any of the Chinese immigrants who made up the majority of these teams.

Despite the Bonaventura padding and a general lack of snappy dialogue from everyone bar Twain (Starscream is especially muted compared to last issue), the visuals continue to carry the story and make it a lot of light fun. We’re really going to need a strong conclusion to stop it feeling like it could have been done in three issues though. Especially as we’re getting bigger and bigger panels as the series goes on, suggesting the artists is having to vamp to fill up the space where the plot is lacking.

But, before that, next week we have the third part of a different type of unstoppable force with Stormbringer issue 3. 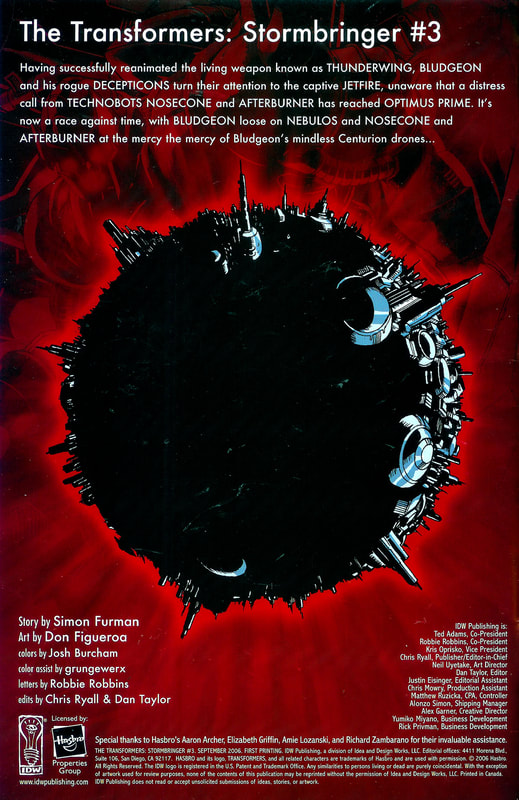