But Now it’s too Late, there’s no Escape from What They Have Done. 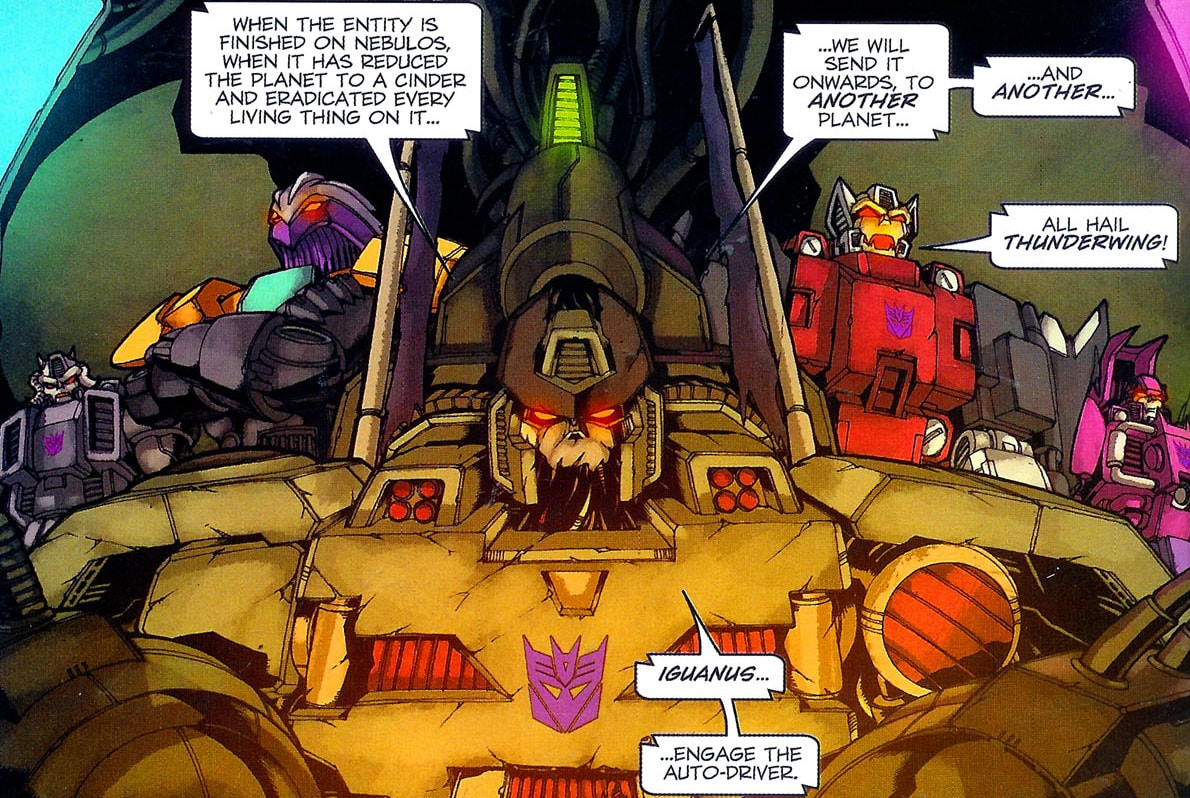 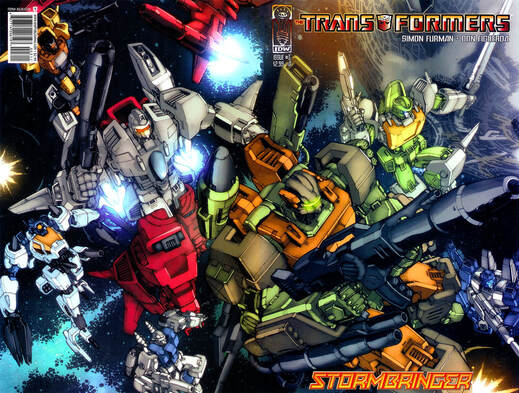 Take ‘em out Wreckers. Hard and fast, save the IDs for the body bags!

The third issue of Stormbringer picks up where the second ended, in more ways than one, with three pages (two in a double spread) of Thunderwing devastating Nebulos.

The “More ways than one” comes from the fact the omniscient narration is carrying on as well, with not so much as a pause for breath. “It is a cleansing purifying fire, a torrid tempest sweeping away the petrified remembrance of sins past”.

For those following the exciting colour of the narration boxes debate from issue 2, these have blue frames, and the fourth page reveals the speaker is in fact...

As he can’t have been doing all of the blue frame narration in issue 2 (some of it is unquestionably Prime’s), that means that all along the colours meant...

Absolutely nothing at all. 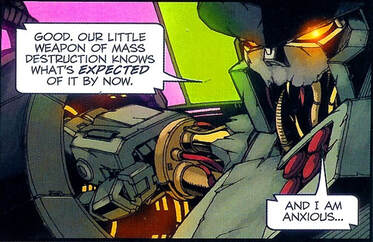 Little bit of politics.
After pontificating at such length, Bludgeon does say something interesting as he flat-out calls Thunderwing a “Weapon of mass destruction”. Still very potent buzzword in 2006, just three years after the start of the Iraq war. Indeed, Doctor Who had almost immediately done its own take on “Weapons of massive destruction” and dodgy dossiers with the Slitheen upon its return to TV the year before. I suspect that by this time even the most ardent defenders of the Labour government had realised exactly what had happened there.

Now, a long time after this the later James Roberts scripts will get some criticism for dropping political buzzwords in (“Fake news”), but none will be quite as strange as this as there’s no real connection to Iraq here. There is a real WMD that is doing massive destruction, the people in authority are reacting reasonably (if you take the threat as seriously as Furman clearly wants you to) and there’s no relevant subtext or message I can spot beyond a general war one.

Unless Furman really believed Iraq had WMDs and that’s the message, but I can’t quite believe he’d be that stupid three years after the fact. 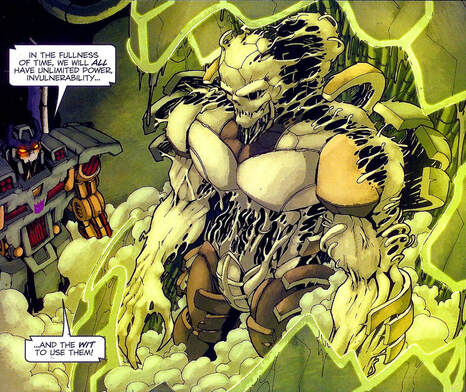 3D printing took a while to get right.
It does signpost though that Bludgeon is rather contemptuous of Thunderwing despite the mystical bollocks, mocking how their former leader wasn’t ready for the process he undertook. Bludgeon on the other hand is ready, or so he thinks, as he looks at his forming Pretender shell.

Which has a massive codpiece.

Guess that’s where he keeps his weapon of mass destruction.

Meanwhile, Nosecone and the now completely unconscious Afterburner are rescued by the Wreckers and Optimus Prime (proving dual shotguns are the right of all sentient beings). Allowing him to contribute his vital role in the story that justifies this separation from the other Throttlebots subplot by pointing to where the Wreckers need to dig to get down to Bludgeon.

Back on Nebulos, it’s the Decepticons that unexpectedly steal the show as the guys in the bunker debate whether it’s even worth doing anything about Thunderwing when their ultimate goal is to wreck the planet anyway. But it’s Darkwing (wonderfully, in charge) who points out they need something left to strip and would Skullcruncher like to tell Megatron they’ve lost an entire planet? 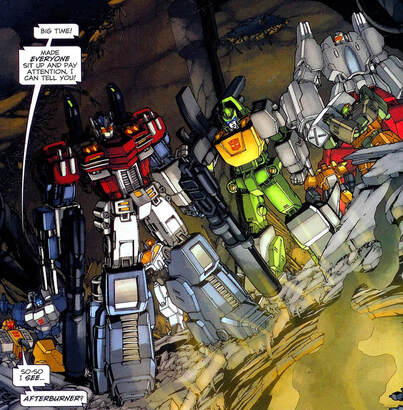 "Sorry I'm late, the weight of these guns really slowed me down"
So, the squad (including Crankcase, Ruckus and Roadgrabber. Thrust stays in the base to do scorched earth if it all goes wrong) head out and we get a lovely moment of Darkwing stopping Dreadwind and them agreeing if it looks like it will indeed all go wrong, they are going to get the hell out of there.

Which is not only a nice bit of actual friendship between the ‘Cons (the first real example in IDW), but also, as far as I can recall, the only real moment between these two characters in the original run of IDW.

What is a little odd is how everyone is reacting to the idea of one Transformer who can destroy an entire planet by themselves, when we’re a few months away from learning the Decepticons have several such super bots on their side and it’s a standard strategy. It also feels as if Furman hadn’t yet had the idea for Sixshot yet, making me wonder if the Spotlights were not yet locked down when this was written.

On Cybertron we get a twist that could have turned the entire series into a shaggy dog story, but instead winds up a nice subversive twist. The Wreckers blast in through the ceiling of the Pretender base (good work Scoop) and immediately these big scary Decepticons fall to pieces, both emotionally and literally as the Wreckers take no prisoners.

A team we will never revisit again.
Iguanus immediately runs to Bludgeon because Bludgeon always knows what to do and finds him in a fantastically designed far closer to his original shell new look.

Literally falling apart is also what the Decepticons on Nebulos are doing, as everyone except the two main fliers (and possibly Skullcruncher who is oddly absent) die fast and easily.

As Thunderwing starts ionising the air, Darkwing and Dreadwind decide to cut their losses and follow their runaway plan. Meaning they get a nice, neat self-contained B plot that is arguably padding but also decent fast character work. It’s a shame there will be no real follow-up on this.

On Cybertron, we get the payoff to the subversion of the power of Bludgeon as it turns out he’s an idiot. He’s made exactly the same mistake Thunderwing did of having gone too fast, but without ending up a super powered zombie either. Instead by the time the Wreckers reach him, his mask has melted into his face and he’s on his knees, comatose and looking like he’s having a very month 12 of lockdown sort of a day. 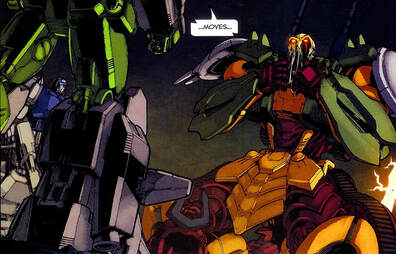 Time to face the music.
Which makes it a great shame that later years will play Bludgeon as if he’s a serious threat dark magician.

A dying Iguanus carefully explains how it’s gone wrong as Optimus Prime, perhaps oddly, comforts him by holding his hand as he does so.

Guess Optimus will kill you but feel incredibly sad about it afterwards.

The idea cultists in the end aren’t especially powerful or clever but often just desperate idiots is refreshing in fiction and makes for both a suitable ending for Bludgeon’s plot and a clearing of the decks so the final issue can focus on the bigger threat.

With an injured Jetfire explaining the way to stop Thunderwing is to blow up the control cradle, something Springer does with a cheerful “Why didn’t you just say?”, the question becomes “Was that enough?”. 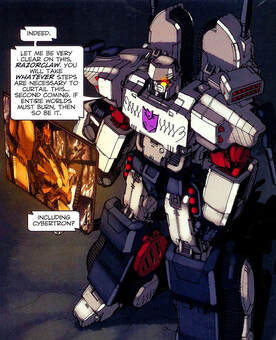 I remember this!
Whether it was or not, someone has bigger ideas to deal with the problem as we cut to Razorclaw (not on Earth, despite what the caption says) taking order from Megatron (who is on Earth, we’re seeing the other side of the conversation from Infiltration) and yes, even Cybertron is expendable if Thunderwing is still active as Darkwing has radioed in to say.

Which means a planet might be about to be destroyed by someone as Jetfire has now noticed a flashing light that means Thunderwing is coming home...

This is very much an issue that breaths in the little moments. Two Decepticons looking out for each other, the utter ineptness of the Pretenders and the very nasty looking fate of Bludgeon. The main plot is rather prosaic, but these and the continued great art keep it just the right side of fun. And if nothing else, we’re promised a big fight for the finale.

Next week is also the promise of a big fight with the launch of a new series and a new interior artist in Spotlight Shockwave.