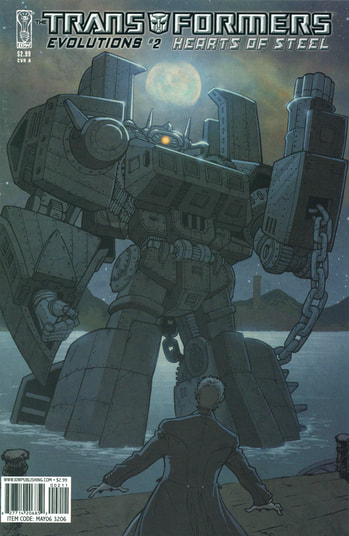 
You one of them new French locomotives?


I’ve spoken a couple of times about the fact that the slightly larger page count the comics had at this point meant they could spend a little longer on things that modern comics would have to rush through. And there’s a fine example that opens this second issue of Hearts of Steel, with the entire first page given over to a series of panels of some railway track being hammered down.

It’s the second page, a full-page spread, that reveals this is the work of a device coming from the front of Bumblebee, with the various front of track workers watching in awe as he goes so quickly. That is, except for John Henry, who is carrying on in the traditional way on another track, looking deeply frustrated.

Which is where the arguments about new technology from the previous issue get rehashed, as Henry points out they’re just serving the new locomotive by bringing it coal and water whilst it takes their job. Though he can’t really do much accept acknowledge the point with a laugh when one of the other workers says it’s not that different from all the biscuits and beans they used to bring him when he was the one doing all the work.

But the evils of industrialisation are shown when the almost literally moustache twirling boss asks his secretary to work out where the new train came from so they can buy more and replace all the workers. 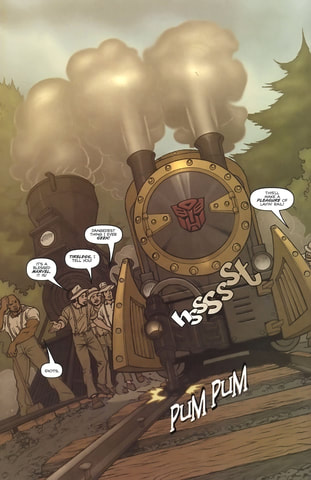 PUM PUM
That, again, being the workers who only have jobs because of industrialisation in the first place.

Meanwhile, under the sea, Muldoon starts to think the seaweed may indeed be always greener, as Shockwave gives him a tour of an installation the Decepticons are building on the Bay floor. With him looking frankly adorable peeking out of a window in Shockwave’s chest.

At this point, Shockwave is the only one to have taken on an Earth form, and we get a fantastically smug Starscream (wearing a head-crest reminiscent of the Breast Force from Victory) with a huge codpiece. I mean, just ridiculously large. Like he couldn’t find a bigger one in the shop.

The conversation quickly confirms that the Cons have only just woken up, and they need guidance and advice from an inventor like Muldoon.

It also answers my question from the first issue, by confirming they are aliens from Cybertron. Which is a shame as I rather liked the stranger implications of the opening more.

Muldoon is happy to help them, especially with Starscream talking of amazing innovations that will create massive cities and give humans spaceflight. 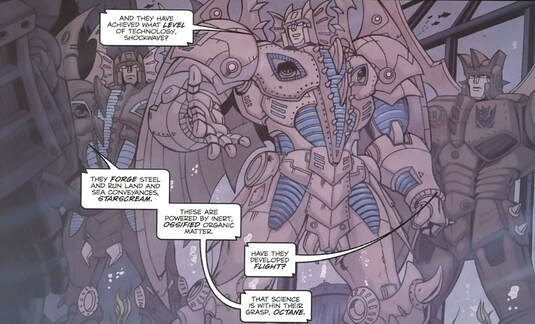 Love yourself like Starscream does.
But to do any of this will take a great deal of money. Meaning we get a lovely moment of everyone leaning in to have Muldoon explain capitalism to the space robot communists.

Back at the railway, night has fallen, and Henry is incredibly grumpy about the new train. So, Bumblebee transforms to reassure him. Creating a possibly racist, possibly fairly playing into the idea that John Henry is a mythological figure and therefore a bit of a Southern stereotype, “Lord a’mighty! I must be sunstruck!” reaction.

But, once they chat and Henry simplifies what he’s being told into the straightforward idea that Bumblebee is just a working man like himself (and not French), he offers his hammering hand to shake. 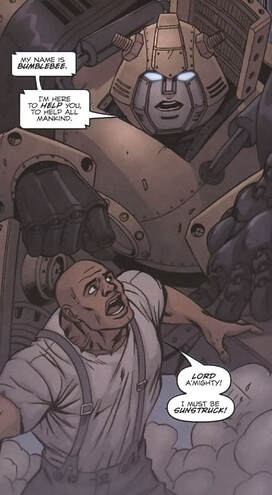 "Sunstreaker" more like.
I hope that wasn’t a euphemism.

But at least it’s a nicer subversion of how the Henry plot was looking to go that he’s actually a perfectly reasonable guy when faced with facts.

On another stretch of track, this series must break the record for having the most railways in a Transformers comic, we get the Exposition Express. This being a train with an armed guard of soldiers, where one has to explain to another that the cargo is gold and cash from the mint in Denver. And also, don’t smoke because it’s supposed to be a totally dark give no clues as to their presence mission.

I guess that guy must have been late for the briefing.

Though I’m not sure how you can do a sneaky steam train mission. Those big metal smoke chugging boys are not especially subtle.

The conversation is short lived though, as what the extras in the trade call the Insectitrain appears and rams the bullion vehicle, derailing it. Before separating into three robots, unsurprisingly enough the Insecticons.

They are also very keen on telling each other things they already know about the fact they’re here to steal the contents of the other train, and (really pushing it) that they’re the Insecticons. 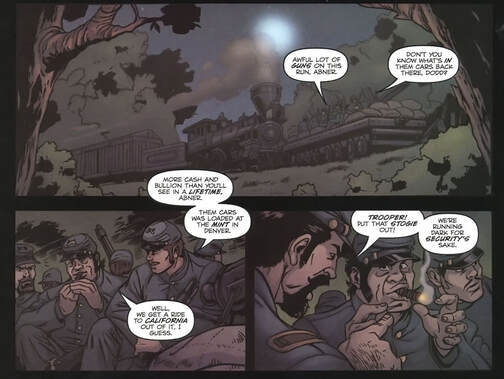 A guy they let write Batman is doing this subtle feeding of key information.
I can’t help but feel that this scene could have opened with a simple “Late night bullion train” caption and ended by assuming we’d remember four pages earlier when Muldoon said they’d need a lot of money from somewhere to cover why the Insecticons are doing this.

In the desert, Muldoon is dressed like Sam Neil in Jurassic Park and drawing plans, but still worried about where they’re going to get the money from. At which point the Insecticons dig their way up with an insane amount of money and Starscream promising more.

Which is then followed by a time-skip, as paid in advance supplies are bought by horse and cart to the train station that Muldoon has already built.

A train station with a massive Decepticon logo on it, showing that these guys really are in the same continuity as Infiltration. 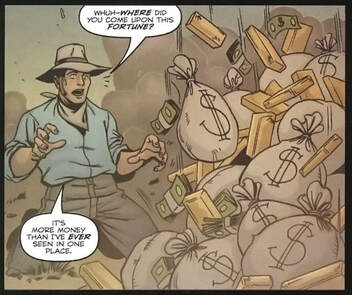 What it took to take the MASK rights from IDW.
I find it kind of adorable that the Decepticons will steal the money, but still happily pay for all their supplies in an entirely legal and above-board way.

Back at the under-construction railway, the robbery has made the press (with a very silly artists impression of the machines that did it), with the other workers not believing a word of it, something Henry plays along with.

But he does tell Bumblebee, and this makes the other Autobots (still disappointed Bumblebee has “exposed himself to a human”) realise that, even if it’s still not yet time to wake up Optimus Prime, then need to find the secret isolated Decepticon base of operations.

Which is now a lot bigger and more metal than a train station shack, but still has the massive logo on the front so that any passing Autobots can immediately recognise it. 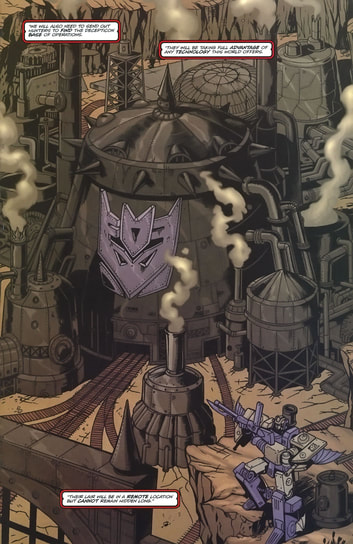 WHERE ARE THOSE PESKY CONS HIDING
Which is where we get a sequence that really should be terribly stupid, but the comic gets away with because it’s perfectly in character for Starscream. Who is, along with Skywarp, now in an Earth biplane mode (both identical, so the colourist mixes them up) and loudly bragging about how stupid the human is and how they’re going to use their new flight ability and The Astrotrain to attack New York city and take over a new power station there.

Which will allow Starscream to finally get rid of Megatron.

A which point Muldoon sensibly runs away.

Maybe look behind you next time you’re going to talk about betraying someone, hey Starscream?

A week later, a tramp looking Muldoon arrives back at San Francisco, at the Stanford house, seemingly mainly to look for sympathy from his girl Kitty. Which does not impress her father, but it turns out there’s another house guest who is interested in the young man’s story...

That’s a little unusual for a Transformers issue in terms of how much time it covers without either flashbacks or a massive skip. At the very least it lasts for a month, possibly several depending on how fast the Decepticons are. That gives it an added sense of scale an otherwise simple story wouldn’t have. 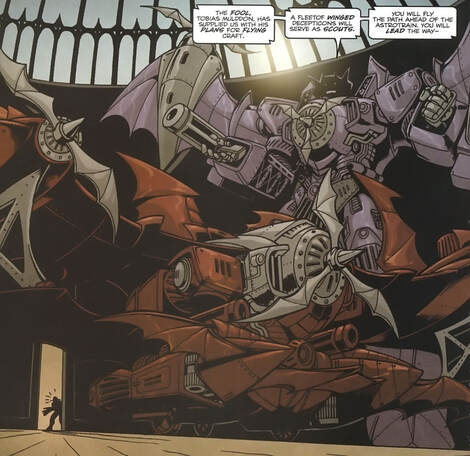 "He's behind me, isn't he?"
To counter that, there is some terrible exposition and, at the halfway mark, the heroes of the story have done nothing but lay some railway track.

Still, coming off the back of the more ponderous Stormbringer, a light breezy (and even a little silly, but in a charming way) story is rather a relief. And Guido’s art continues to shine, with his Starscream especially being a magnificent bastard.

Next week, we’re still on the train to New York.