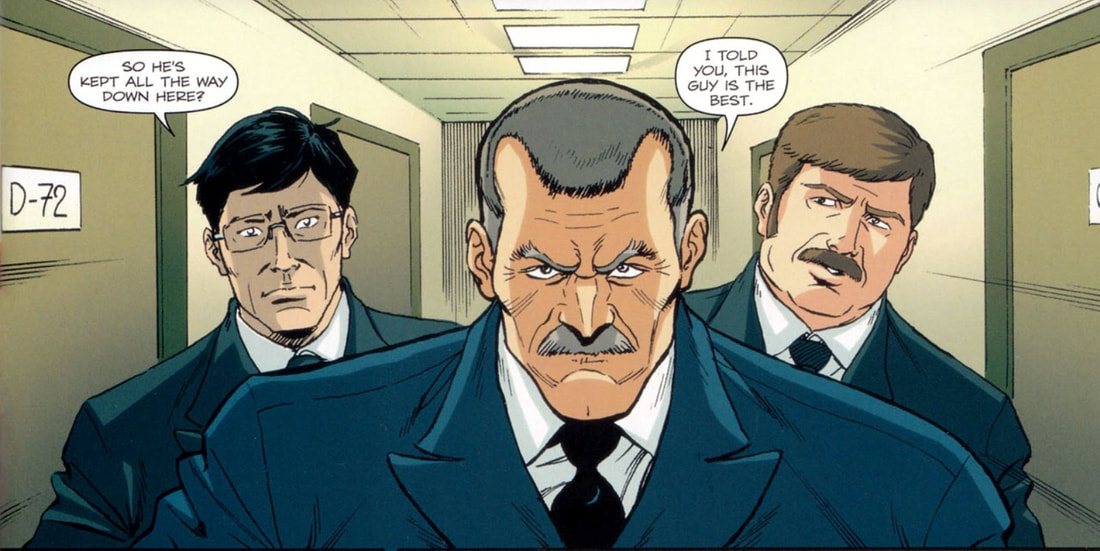 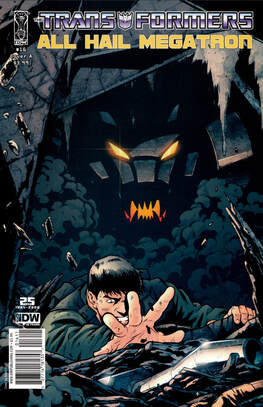 It’s going to be a few weeks before I can do autographs.


Here we are then, at the end of an era. Six months after the end of the Furman era, and four months since the first attempt to end the Shane McCarthy era. To say we’ve been in a strange transitional period where IDW just can’t seem to put the brakes on properly would be something of an understatement. But from the next issue, we are fully into the brand-new big relaunch.

Which makes this the last chance to tease some of the forthcoming stories, to set up plotlines and entice readers who may be feeling somewhat burnt out by this point to stick around. Last issue did a particularly excellent job of doing that with Kup and Perceptor, so let’s see if Mike Costa and the frankly amazingly named Zander Cannon can keep that form going. 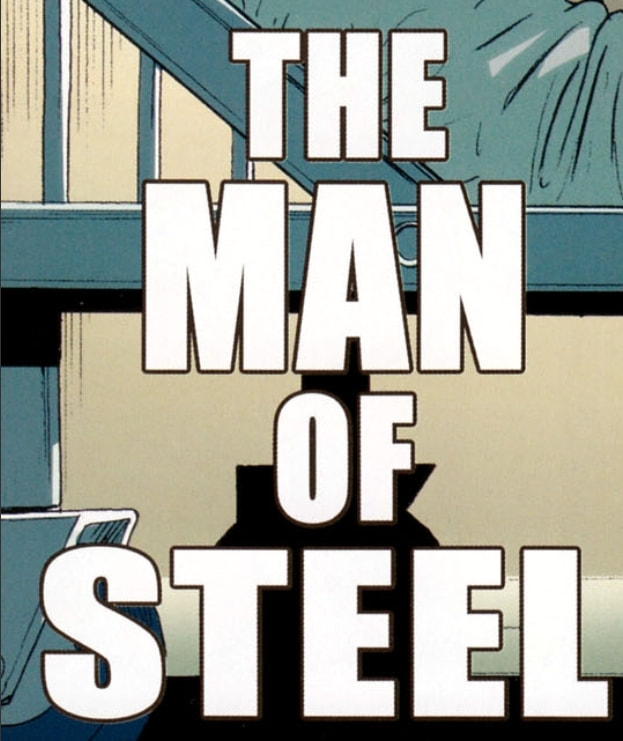 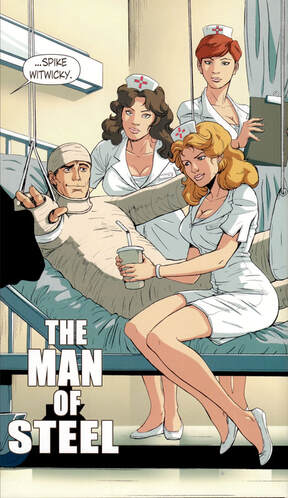 Captain Tom walked up and down his garden 5000 times to pay for those uniforms.
The first story, Man of Steel, opens innocently enough, as a USAF high ranker escorts two middle aged men in suits down a corridor, refuting their suggestion that the man they’re about to meet is important because his dad is connected. Because behind this door is a real American superhero.

Which gives us our splash page. Of Spike Witwicky. In a hospital bed, dome up like a mummy.

Surrounded by what can only be called stripper nurses. Short skirts, big breasts, perfect hair, and makeup. All exactly like what no actual hospital worker on a long shift looks like.

And they’re all fawning over Spike.

I would hope that, in ‘Allo ‘Allo style, these actually are strippers, and Spike is going to have to do some “You stupid general, can you not see, she was just mopping my brow” skit to defer suspicion. But no, in the fist sign that the departure of Furman is not going to be the end of the comics issues with women, it’s just a weird lowkey sexist joke.

Spike’s extreme smugness and disappointment at losing “The view” when the nurses are ushered out, is also our first sign Costa is entirely going to base his take on the character on the pants scene that was insufferable under McCarthy. But even more so. 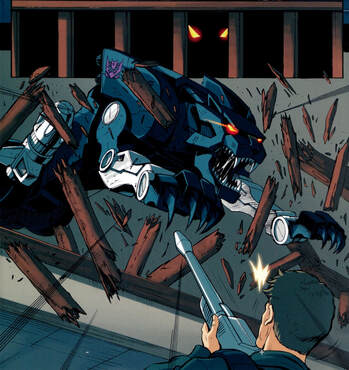 Guess he really is a pussy magnet.
The two men in suits are introduced as Peter Dille and Frank Shin, a very obvious reference to the original Prime and Megatron actors and two key creators on the 1986 film that nicely foreshadows how Costa is going to think he’s a very subtle and sophisticated writer, whilst actually being one who is very on the nose. And because there’s not really enough plot here for 11 pages, Shin asks to be told how Witwicky ended up in hospital.

Which is followed by a largely irrelevant flashback, showing Spike has been promoted and taken up leadership of a taskforce using null-ray-based guns to hunt and capture the remaining Decepticons, including poor old Thrust. It was when fighting Ravage in a new build that caused the entire thing to collapse on them both, putting him in plaster for a month.

This somehow impresses everyone in the room, who then reveal that Skywatch is now under UN oversight, though for some reason the top brass is very keen to point out the “Trustworthy” person in charge is still an American, because when you’re a broken and defeated nation, pissing off your allies to their faces is the best thing to do.

And because pussy magnet Spike is so good, even though he can’t actually move and will presumably have months of physiotherapy ahead of him, they want him to lead the frontline taskforce of Skywatch, finding Decepticons all over the world.

Yes, IDW, who have been and will remain largely contemptuous about the films, have blatantly ripped off NEST from Revenge of the Fallen. 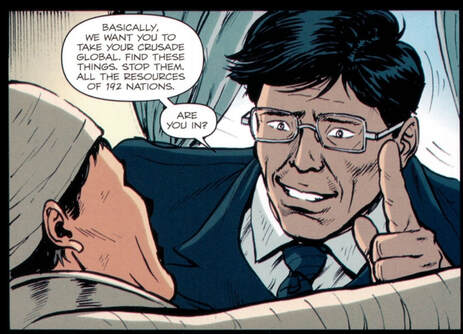 "Just don't tell Michael Bay"
Spike accepts and is only then told his dad is the “Trustworthy” American is in fact, his dad.

So, the UN guy was right, he literally is only getting where he is because of nepotism? And let’s just ignore that he would not be allowed to directly serve under a parent.

For a comic where almost nothing happens, it’s literally just Spike being offered a job and everything else as padding, this does rub me up the wrong way. There’s lots of very annoying moments, from the overly sexy nurses to some nasty jingoism, to Spike just being very, very annoying.

Guido Guidi does OK on art, though I don’t think anyone will call it his best work and he’s clearly more comfortable with the Ravage fight scene, but as a story, it’s full of warning signs about what Costa’s run is going to be like, and I remember being severely concerned at the time. 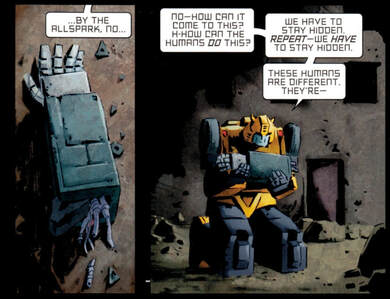 For all he knows, the Autobots did that during the battle.
The second story, Hidden, is, surprisingly the only Coda setting up a new series to be from both the writer and the artist of that series working together (with the exception of the one where both of those are the same person), Zander Cannon of the amazing name, and Chee Yang Ong, who drew the second stroy in issue 13.

After largely being a minor supporting player, who I can’t particularly remember having done much of note since Infiltration, Bumblebee is getting his own miniseries now entirely because the movie version has been a popular breakout character who was genuinely a cinematic icon of the Noughties. But, because of that aforementioned contempt for the films, IDW are happy to try and make cash off the back of them, but not to actually make it about movie Bumblebee.

So, it would be reasonable to expect the character to be adjusted, especially as the forthcoming comic is supposedly aimed at younger readers who would only know the film version (more on that when we get there).

Instead of making him tougher and more entertainingly eccentric though, Cannon decides to go in the opposite direction. IDW Bumblebee was previously tough, no-nonsense, a little cheeky and rather cynical. 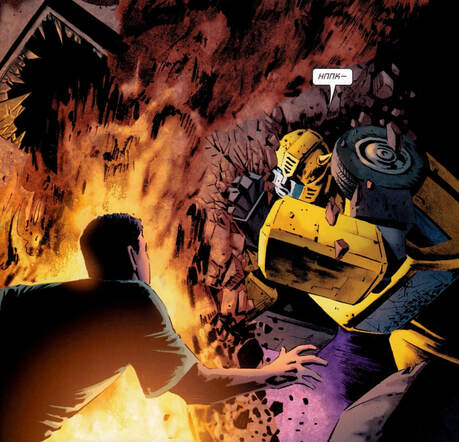 Pictured: Nick Roche holding up IDW.
The Bumblebee here, who we meet digging his way out of rubble after some battle or other (it might be the end of All Hail Megatron, but the implication is this is a different city than New York because the Decepticons have invaded more than one place on Earth this month) is a complete, naïve, babyish idiot.

Who, as he overhears one of the Decepticon hunter groups of the sort Spike leads going around following his tracks and being dismissive of the “Good robots are cars, bad robots are jets” idea, and then finds a dismembered Cybertronian arm, has a breakdown about how the humans are “Different” now, about the terrible things they’re doing and he used to be a good friend of theirs but can no longer recognise these scary people.

Just think of some of the plots Bumblebee has been caught up in since he got to Earth, including humans doing brutal experiments on Transformers. Did he hit his head?

Despite this, when a car alarm tricks one of the soldiers into shooting a vehicle a family is trying to evacuate a building with—causing a chain reaction that makes said building start to collapse—Bumblebee (you know, the “humans are expendable” guy) rushes over to hold it up, taking fire in the process, but getting everyone out.

The soldiers are not impressed though and are about to deliver a killing blow. Which is where you remember that, in the previous story, they were capturing Decepticons, not killing them. And that they don’t kill the Transformers will later be a major plot point when Spike crosses the line. Not to mention this is the tease for the comic that’s supposed to be aimed at children, showing the US army about to execute their favourite character. Luckily, Optimus Prime arrives and fires off a warning shot, telling the humans to leave Bumblebee alone.

Again, Prime’s behaviour here is in stark contrast to how he’ll be in the very next issue. 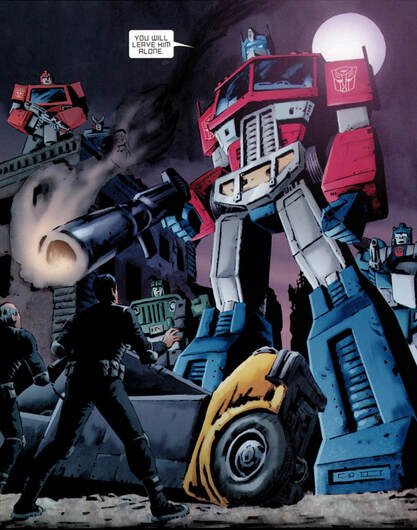 Good old Optimus Prime, never surrender.
Bumblebee goes offline, but when he wakes up, Ratchet cheerfully tells him that they never picked up his distress calls, they just followed reports of a yellow robot and went where humans were in danger, because that’s where Bumblebee would be.

Not the Bumblebee of the previous issues.

This was simply weird and awful. Most importantly, it doesn’t seem to realise why kids like Bumblebee (this take would be an embarrassment to the Animated version as well), creating an awful and annoying wet blanket of a character who makes me long for Wheelie.

And whilst it’s nice to have some attempt at an overall theme again with the depiction of the Decepticon hunters (now Skywatch) in both stories, if the first had emphasised the “These humans are dangerous” side over comedy pratfalls, the second would not have been needed at all.

The art by Chee Yang Ong is very much in keeping with his work on issue 13, but here it doesn’t really suit the For Kids tone, and he’s showing the first sign of artists just drawing Transformers however they like with no consistency with other artists that will come to be a major issue over the next few months, and of which you’ll be hearing a lot more as well go along.

Effectively, the virgin IDW Bumblebee cries over humans, whilst the chad movie Bumblebee urinates over them. And I know which I prefer.

So, after the previous issue rallied round, the conclusion to the not technically a Coda series does not make the forthcoming relaunch look very promising.

Luckily, before that, IDW had one last ploy to get people excited and get new readers up to speed. So, click below for an addendum on the Q (for questionable) Continuum. 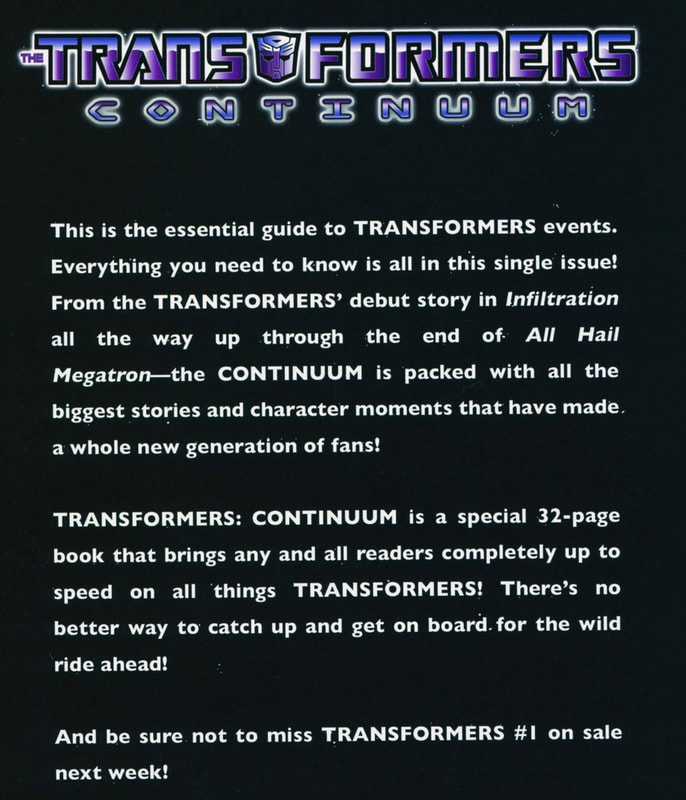