Fighting to Save the Day. 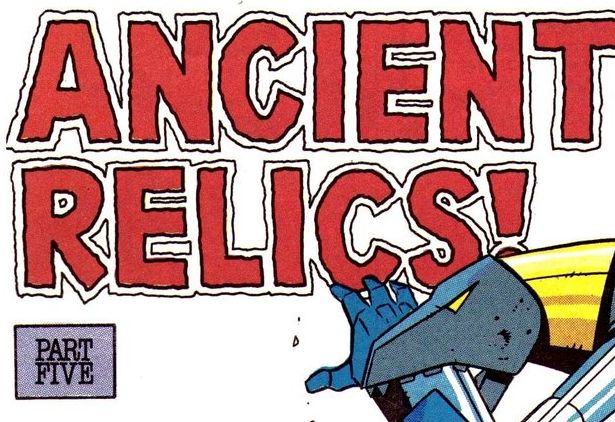 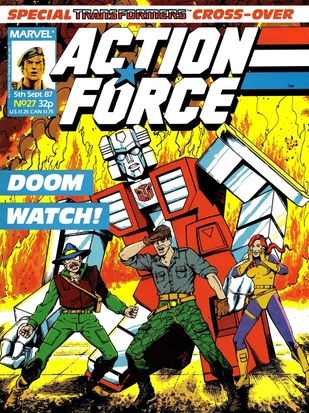 You're wrong, Centurion wasn't an ancient relic. Perhaps old soldier is more applicable. And as such, I salute him.


Isn't that just a lovely cover? Not just for being the second Marvel comic in a month (out of two in the company's entire history) to have Blades front and centre on it, but for the Doomwatch reference, the sort of gag that would go over the heads of the target audience but which would likely make their parents smile.

It's not just a '70's TV name check either, the second most famous Doomwatch moment (after the rats) involved a regular character being blown up on a pier. Yes, it turns out Centurion 2 was Robert Powell (or as I think of him, Jesus) rather than Professor Morris all along.

This does however show up one of the problems with this last part, it’s entirely based around this new Centurion and both his internal narration and ultimate self sacrifice, but he’s a character we have no investment in. The abandonment of Professor Morris and everything that made Centurion interesting means that pretty much any actual Autobot could be slipped into the same role with the barest amount of rewriting, he’s nothing but a bland cipher and that does hurt the drama.

One thing that has occurred to me over the course of this story is a possible reason for why Centurion’s back-story is being downplayed to the point of having been completely ignored, and that reason can be summed up in one word: Headmasters. In a week the main Transformers comic will be introducing an entire range of Transformers with the central gimmick of a “Human” being bonded with a giant robot in an advanced meshing of man and machine.

Considering that this is going to be treated as a Big Thing, could it be perhaps the case Morris is deliberately being ignored and Centurion is ultimately written out here so as not to steal the thunder of Hasbro’s newest product?

Of course, as those who’ve seen my London Film and Comic Con video will know, Furman successfully (and charmingly) shot down my “Rack’N’Ruin was named after Rocket Raccoon’s ship” theory so this could equally be an idea pulled out of my bum with no basis in fact whatsoever, but it does have a certain logic to it. 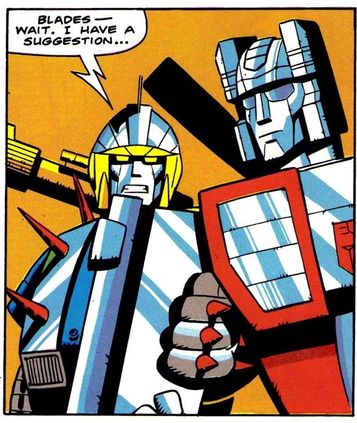 "Don't forget me will you?"
Either way, it does become somewhat hard to care about Centurion as he muses on how useless he is and that he wants to make one final difference, and it’s fairly obvious he’s going to be the story’s sacrificial lamb and will swap places with Grimlock so as to get blown up fighting Megatron in his place. Indeed, despite the attempt at a eulogy for the character at the end, it’s hard not to feel that no one else in the story cares that much about Centurion either, he’s allowed to sacrifice himself with little fuss or protest; even from Wild Bill despite his “I’m not leaving anyone else behind ever again” attitude. You suspect poor old Centurion was forgotten about by the time Grimlock got back to the Ark.

Speaking of redundant characters, you can also very firmly tell here which of the two franchises featured here was Furman’s favourite as Action Force themselves actually wind up playing a very minimal role in the conclusion. The Sky Strikers and their bombs provide the off-switch for the story and Wild Bill does get to slightly motivate Centurion into his final fate, but other than that they’re basically watching as Grimlock, Blades and Centurion sort things out.

This is a shame for regular readers of the comic, especially as Flint remains good value with his final thoughts on old soldiers, but does emphasise (in contrast to the American crossover) the extent to which humans are out of their depth in this conflict. This rather neatly deals with the fact Grimlock (who, incidentally, as with King of the Hill!, will instantly forget the lesson he learns here about humans not being useless) makes some potentially useful human allies for the Autobots who will never be called on again. What would be the point of getting on the blower to Flint in a crisis when all he’ll be able to contribute is standing around looking cool? 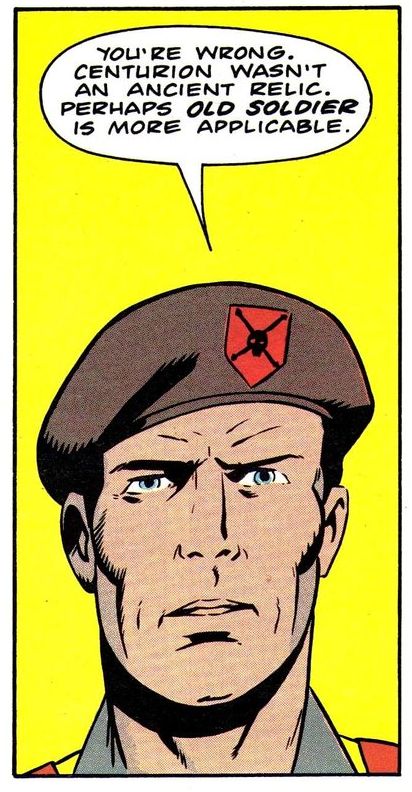 Cooler than Duke.
Well, actually, perhaps he could have drained the Thames to retrieve Megatron’s body rather than dismissing seeing it stumble from the explosion into the river. Who’d have thought that Richard Branson would be better at alien corpse retrieval than the army?

With the hook for the story being rather weak, what works this issue? Well, the Senior art means that the fight scenes, however brief, remain awesome, with Megatron being entertainingly pissed off with Grimlock. Also, despite the flaws in his presentation, Centurion’s wry smile as the Sky Strikers come in for their bombing run is very nice as well (if somewhat similar to a Ultra Magnus moment we’ll be getting in the Annual).

Overall, and perhaps unsurprisingly considering the short page count, this is a story that works best when read in one go over an hour. At a weekly rate the creeks do show a bit more, though Part 4 was a legitimately great instalment in and of itself.

However, it’s certainly not as bad as the people who made it seem to regard it in retrospect, and whilst it may be throwaway the Geoff Senior art and some deft writing touches from Furman mean that this works out as quite a fun story despite the flaws.

Our final look at an issue of Action Force kicks off with the contents page (missing its Mission Control header this week) announcing the winner of the original wrap around cover art from #18, the same issue reprinted in Transformers a few weeks ago. It also gives the results of an ad hoc contest to name Shipwreck’s parrot, not as in “What is his name?” (which, as we all know even if Marvel UK seemingly didn’t, is Polly) but “You name him”.

However the winner- with the name of Seasick- forgot to include their name meaning the editor has to ask them to write in again. If that was you, you may have missed the boat if you left it this long.

Incidentally, I’ve been watching a lot of the Action Force cartoon this week and Shipwreck is by far and away the best character in the whole show. Possibly of all fiction ever as well. 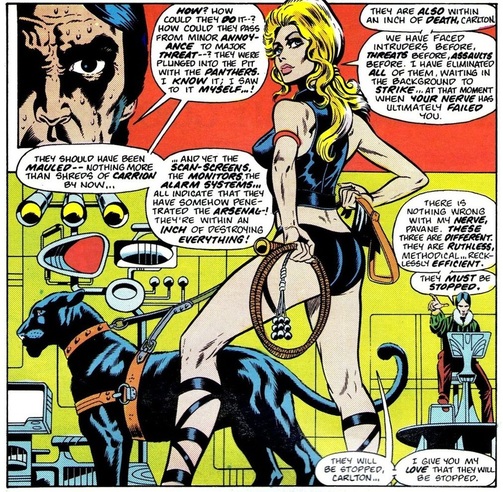 Master of Kung Fu: A Load of Arse.
The concluding part of Celebration! almost feels like a summing up of everything that made Larry Hama’s lengthy run on the book what it was. So you get unlikely soap opera elements (the child assassin was Cobra Commander’s son!), bad puns (the general and his speech) ninja’s (Storm Shadow knows something is wrong with Billy because he is a ninja, Snake Eyes is the only one of the original Forcies not put into what will be a brief stint in office work because he’s a ninja) and the setting up of a long running plot that will sort of whimper out in a half arsed way because it doesn’t involve a ninja (Ripcord here meets his girlfriend of Bongo the Bear, who will go missing and die horribly whilst he goes on a quest to find her. The resolution of this epic subplot winds up being a half arsed “Oh yeah, she died Ripcord. Now go back to your proper place of minor character and don’t get ideas above your station as if you were a ninja ever again”).

However, whilst stock Hama, it’s still rather fun and there’s a nice gag in the Fake Fred living right outside Action Force’s new base without either side ever realising it.

Mail Call! features not one but two letters from Americans (including one with the most American name imaginable of Dale Philbrick II from Rialto) who talk about how much they enjoy Action Force in relation to G.I. Joe. As with Grimlock’s mentioning of the American comic in the last Transformers issue this does feel like an attempt to assure kids who are discovering comic shops that the British version is still the best, with the added twist that Flint also makes a half hearted attempt to make the comic sound worth buying for American readers- an original cover every week! Wow.

I’m still not sure what’s going on in Master of Kung Fu, and likely never will now. However, the creative team have clearly decided what the story needs is a sexy blond villain in leather underwear wielding a whip to perk reader interest. Amusingly she’s even introduced in that “Back to the camera jutting her bum out” out pose that has recently become so mocked when used for the female characters on superhero movie posters.

Sadly, Combat Colin has stopped rhyming, but he does get to use his Ricochet Brolly and we get another cliff-hanger as the villain in the tank is revealed to be none other than Doctor Nasty! This, more than anything else would have made me want to keep getting Action Force.

With the end of Ancient Relics!, I thankfully return now to my normal weekly schedule (in the early days of this project people would often helpfully suggest I do entries more frequently so as to get through the book quicker. The amount of my week this has eaten up during the last month has helped convince me this would be A Very Bad Idea), though there will be a final video Addendum covering the Action Force movie over the weekend.

On Friday however, we return to the Evil Brainwashing Disco Carwash. Will Buster Witwicky be able to defeat it? 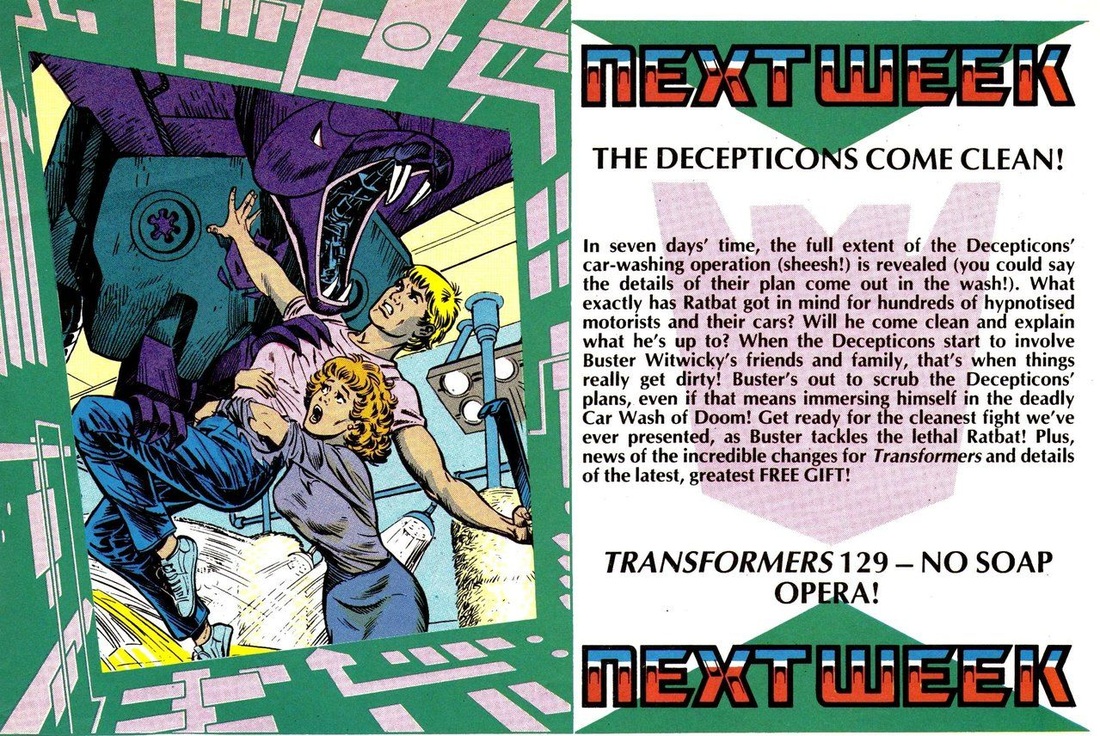