I Need Something to Change Your Mind. 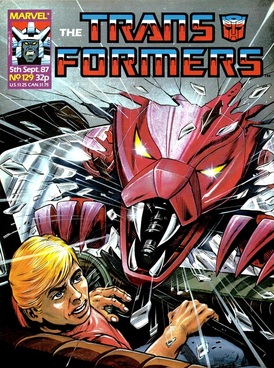 
You can stuff the inevitable, bat-brain!


Happy Halloween! I'm sitting here in my burnt and mangled Centurion 2 costume (Professor Morris not included), and what could be more appropriate for this spooky holiday than a story where a giant robot bat tries to eat a teenager?

I think there's a very specific way to enjoy this story on its own merits, and whether or not you buy into this idea will affect the extent to which you'll be willing to put up with Budiansky at his most frivolous.

This story is, to all intents and purposes, not an instalment in the ongoing adventures of Marvel's Transformers, and if you judge it on those terms it will be rather disappointing. It is more an episode of a wacky sitcom where the long term implications of what happens are irrelevant, instead everything is subservient to the rule of funny and what happens in one episode can easily be forgotten about in the next. It's rather like the cartoon in that regard.

So, let us take Ratbat's plan and its failure here. He has control of G.B. Blackrock, a man who not only has the looks of Tony Stark but also the money of Tony Stark, a man who also has a fleet of oil tankers of the sort the first half of this story established the Decepticons are keen to grab.

Does Ratbat use his mind control of Blackrock to send a bunch of these tankers to his island base? No, he instead comes up with a convoluted and time consuming plan to steal the petrol out of cars one tank at a time by hypnotising the drivers with an Evil Brainwashing Disco Carwash.

Now, remember how last week Ratbat was berating Shockwave for being wasteful? Plus, when Ratbat's silly scheme fails, he should have handed ol'one eye a major victory in their back and forth that would not only have let him regain some of his lost face but also seriously- possibly even terminally- undermine Ratbat's leadership.

If you're interested in Transformers as an ongoing series, the fact none of this happens at all (indeed, these events won't be mentioned again until a glorious flashback in the first issue of Generation 2), coupled with the inherent silliness of it all, is going to make this an extremely annoying adventure. 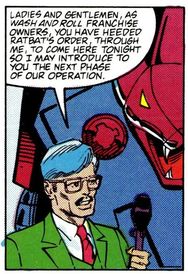 "Riddle me this"
However, if you're prepared to view it as a standalone (to the point it's not even interested in the continuity of Sparkplug's first name) bit of fluff, this remains deliciously entertaining, and the fact the climax is a fight to the death between Buster and Ratbat within an Evil Brainwashing Disco Carwash tells you exactly how seriously this should be taken.

The genius of Bob's portrayal of Ratbat is the glue that holds this together, and second to the fight the highlight is him having his mind controlled puppet Blackrock tell his other mind controlled Wash and Roll operators (including Irving. I mean William. I mean Sparkplug) his entire evil plot for no other reason than because that's the sort of thing over the top camp villains do.

What can be overlooked amidst the deliberate B movie pastiche is that this issue is actually a good showing for the humans. This is the last time Buster gets to be the main supporting human before his brother relegates him to hostage status and he gets a decent final fling. He's not such an idiot as to think taking on the Decepticons by himself would be a good idea and is simply planning to go get the Autobots until his father is on the point of being the first to go into the new permanent brain mangling car wash. 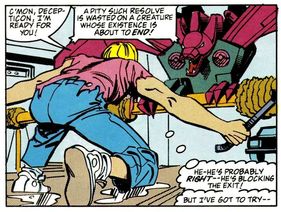 Bat's all folks.
Then, despite having to improvise as he's going along he still thinks well on his feet, working out a flash of light will cure the brainwashing and shorting out an electrical sign with a tyre iron so as to save everyone, he’s also nicely defiant to Ratbat as the Decepticon tries to eat him in the carwash. Jessie also, finally, gets to be useful after three years of being a terrible character, refusing to run when Buster tells her and instead running down Ratbat with her own car.

Though if this was going to be a story with consequences that moment alone would probably lose Ratbat his position of power.

Even Blackrock (who amazingly meets the Witwicky's for the first and only time here) and Sparkplug get some nice material as they recover, with the former promising to give the profits from the stolen gas to charity and the later realising Buster needs more opportunities to do his own thing. 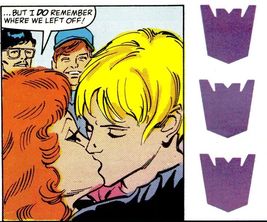 The altered ending.
Things then end in the highly appropriate American TV "Everyone stands around laughing" way as Jessie resumes apologising to Buster, though readers are likely to be distracted from this by the odd row of Decepticon logos on the page. This being the UK teams attempt to cover up the American issue's promotion for Used Autobots.

This certainly won't be to everyone's taste and I can see why it has wound up so reviled in fandom, but I actually enjoyed it much more than I expected. It's silly, but still well thought out for what it is and, alongside the enjoyable nature of the Scraplets story, suggests Budiansky now has a firm handle on his new, lighter approach to the series.

The rest of the comic this week is in a rather sedate mood as issue 130 is going to be a big format shaking one. The most interesting thing about Transformation beyond the further promotion of "Cover to cover Transformers" is that the sidebar asks readers what they'd like to see as the backup once Headmasters ends. As well as more iterations of Iron Man, the return of Hercules is also mooted (had he another series around this time, or would this be more archive stuff?), but it seems the comic is pretty much open to all suggestions.

"Any backup as long as it's Action Force".
Assuming the readers did manage to have a say in things, Iron Man was clearly the winner of this popularity contest, but it will wind up a very short lived victory as the collapse of Action Force will, well, force Marvel's hand.

Grimgrams sees a rare example of criticism of the American talent (normally there seems to be a gentleman's agreement in place that Grimlock will only present complaints about the stories the local team are involved with) as Nicholas Lawrence from Taunton takes both Nelson Yomtov and Steve White to task for the decrease in quality of the colouring since Target: 2006. Grimlock explains about the new colouring process- which is of course only actually being used by the British but we're back to the comic pretending the stories don't come from two different sources- and defends it as being a case of moving with the times and allowing for crisper and cleaner colours even if the variety isn't the same.

Iron Man concludes his adventures (for now), preventing the Russians from deliberately causing a chemical spill than could be blamed on the US by blowing up their "trawler", followed by a rather nice coda back in London as Stark visits the old scientist on his deathbed to assure him his deadly legacy has been made safe.

Overall, this has been a nice solid story that, though not as impressive as the preceding Arno Stark adventure, still suggests Tony could have made a nice continuing back up for the comic. But this was not to be.

Next week we get cover to cover Transformers (something you may not have been aware of as the book hasn't been making much of a fuss of this) and the chance for me to make lots of jokes about good head. But first, on Saturday, a final Addendum to round off Action Force month as I do one of my amazing videos looking at the film. 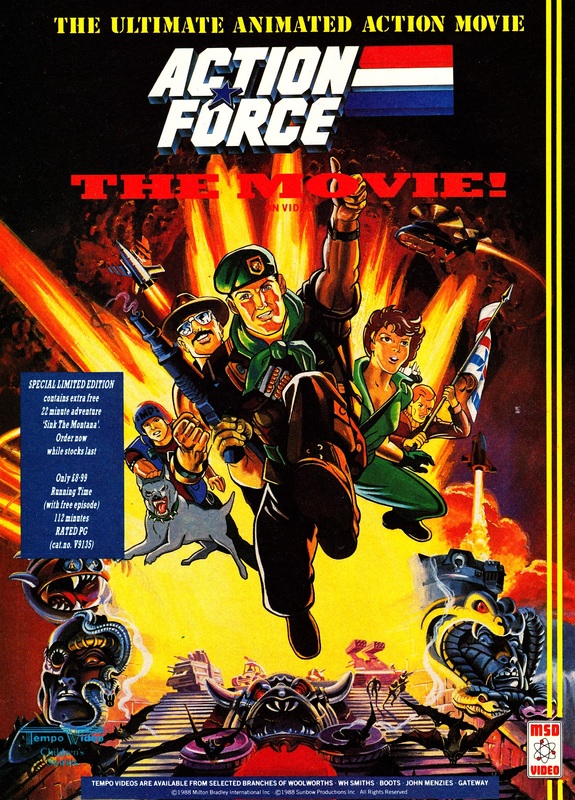