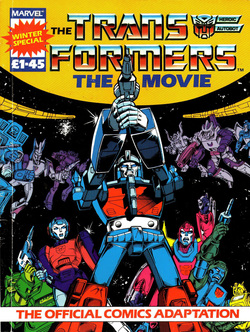 A quick dull note to start with, the exact publication date of this special is somewhat vague (well, beyond "Winter"), though the next few issues of the weekly may clarify things. However, it was out before December 12th as the film is still forthcoming and the inside back page uses the cover of issue 88 for an advert, so it certainly has to be very close to where I've placed it. With that bit of excitement out of the way...

If there's one bit of 80's Transformers fiction you can guarantee everyone who has ever experienced even the smallest part of it will know it's the film. It's a great irony that the movie that was an almost total box office disaster (there were even claims going around fandom a decade ago that it still hadn't made its money back, though as with all fandom claims about G1 in general and the movie in particular a large pinch of salt is always needed) and which gave the original iteration of the franchise a death blow from which it never really recovered is now the touchstone that binds all of fandom together.

Now, there's many a box office disaster that's gone on to be regarded as a classic, or even (and the Transformers film fits more into this category) a cult classic. How this happened with The Transformers: The Movie and how deserving it is of its status as a much loved post pub classic by a certain generation is something I'll get into more detail on when I cover the film itself. In terms of what we're looking at today, it's fair to say that if there is one definite reason why the film is better regarded now than when it was released, it's not because the comic adaptation is really really awesome.

I've shown my hand somewhat there, and perhaps I'm being slightly unfair on the quality of this adaptation. After all, as was so often the case with this sort of book, the creative team would have been working from advanced scripts and scant visual information, not to mention an added level of editorial interference as, for the only time in the Marvel run, the people behind the cartoon would have had a controlling influence in the project.

Indeed, compare it to any of IDW's adaptations of the Bay films- which were produced under boasts of great creative synergy between the publisher and Paramount- and this knocked out quickly three issue series more than holds its own. But being aware of the difficulties in doing an adaptation can't really compensate for the flaws that come over when reading it. 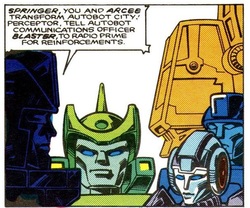 "Oh, I thought you meant G.I. Joe Blaster".
As we all know the plot inside and out, I’m not going to go into a blow by blow recap. Of course, at just three issues there’s lots of material missing, though this isn’t always handled in the best way (Wheelie shows up to say one line before vanishing and never being seen again). The script is written by Ralph Macchio, whose last contribution to the series was way back in the first US issue, Uncle Bob is still around editing the series, but frankly you can tell the writing is being done by a much less experienced with the franchise hand.

If there’s one thing the film does have going for it, it’s that it has generally snappy and sharp dialogue. This adaptation generally drains all of that away, there are very, very few lines (mostly towards the end of the three issue series, suggesting the team had gotten itself together a bit more) that aren’t made at least twice as long and twice as cumbersome, even allowing for Marvel’s house style of insisting characters are referred to by name and things are a bit more spelled out.

One small but particularly telling example is when Ultra Magnus orders Perceptor to “Tell Autobot communications officer Blaster...” Considering Blaster is completely cut out of the comic establishing he’s the communications officer actually makes a degree of sense, but what on Earth is the point of clarifying he’s an Autobot? In fiction, would Perceptor need reminding? Out of the fiction, would even the most clueless reader think Ultra Magnus might be in the habit of passing on a message to a Decepticon or a Gobot in the middle of a crisis?

This has the net result of making the whole thing an almost impenetrable read, only enlivened by the odd totally bonkers moment like Sludge getting a brilliantly tortuous line trying to cover up for the absence of the Wheelie subplot which ends with the classic “Nothing is more important than the life of an Autobot. And now that we’re together, we’ll win here and then retake Cybertron!” Yes, one of the cartoon Dinobots is supposed to have said that. 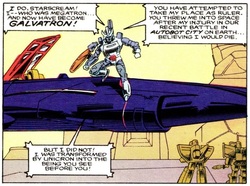 More clunky lines, plus some of the nicer art.
With the script an almost total mess, that leaves the art to carry things. What’s interesting is seeing the evolution of Perlinr’s style, it’s clear that as the series went along he gained more and more access to visual material from the film. So that whilst The Planet Eater! is almost entirely visually divorced from the film bar the odd little moment (Prime’s upper cut; Springer’s run down the trench; Sunstreaker hanging about with Prime of all things) by The Final Battle! the panels look more and more like random storyboards from the film.

I’ve never been a huge fan of Perlinr’s work here, but there was a minor revelation a few years ago when some of the original line art wound up on Ebay, and looked so much better than the finished product. It was by far the starkest statement that Nel Yomtov really is a massive loadstone around the neck of the American comics. The big problem of course is it has to compete with the hugely expensive animation of the film itself, but whilst it’s not the best work we’ve seen on an US issue it is at least functional. 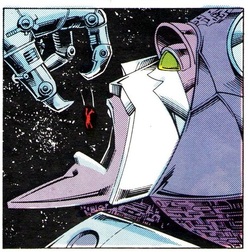 One of the closely based on the film panels.
So, with a poor script and adequate art, what does this adaptation have going for it? Well, in the winter of 1986 it gave kids the chance to relive the film over and over before the rental video came out. Indeed, with the movie’s dismal box office it was likely the first exposure to the story for many readers. However, in this age of Blu Rays and downloads, its use as a proxy is long past.

There are a couple of minor deleted scenes- The Autobots loosing Galvatron’s forces in an asteroid belt and Ultra Magnus’ original death being the main ones- but not enough to make this an especially interesting alternate take on the film. At best, this is a historical curio.

The comic itself however is well presented, returning to the card cover and spine of the first two collected comics it has the nice hefty feel of a proper trade. There’s also an introductory page (not branded as Transformation but basically the same thing) explaining this comic is the best movie you’ve ever read, and a full page advert for the weekly. Nearly every reference to the year being 2005 is changed to 2006 in order to tie in with the regular comic, which is a nice touch even if they did miss one. Really though, this is for completists only. 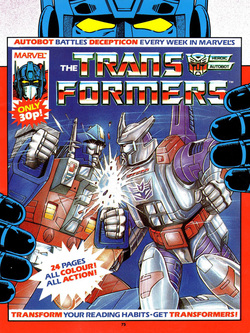 The advert for the weekly.
Having covered the Ladybird adaptation previously, I suppose it’s only fair to finish off the set and give IDW’s own comic adaptation the full discussion it deserves.

There you go, that does it.

Yes, I am a cruel and horrible person. You know what else is cruel and horrible? Promoting a comic adaptation of a twenty year old film off the back of the "new" scenes being included and then only putting them in the trade. That was one of the more annoying things IDW ever did, out of a very long list.

Finishing off the third of our updates for today, click below for the Movie Poster Magazine. 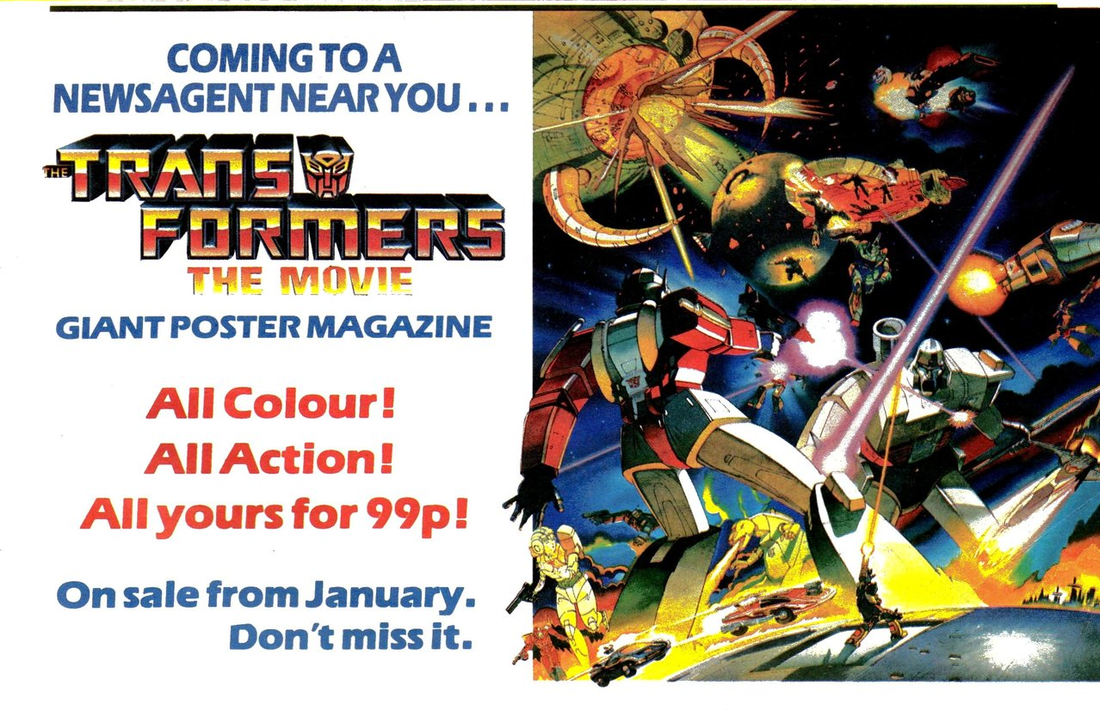