But When Loved Ones Are Apart, Christmas Cards Need More. 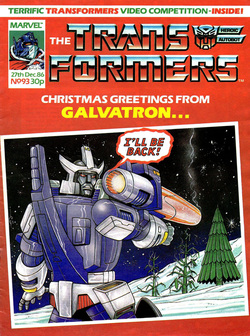 Wonder if, in the future kids will be studying the Transformers war on Earth instead of this "Battle of Yorktown" stuff I've got to wade through tonight...

Ho Ho Ho. Here we are again, the end of another year means our second ever Christmas story. Though interestingly the comic itself presents it as a long standing tradition rather than something that only started the Yule before, but then, 12 months is an eternity when you're a kid.

After a few weeks where the UK team clearly wasn’t deeply interested in the American stories they've had to reprint, the cover suggests this apathy has started to stretch to the home-grown material. For the first (and indeed, with the exception of big round issue number covers, last) time since issue 2 it has no relation to the contents whatsoever, being at best just promotion for Galvatron's return in close to two months, at worst a straight up dirty cheat designed to get kids browsing in the shop unduly excited about something not actually in the issue.

Thankfully though, once you’re past this proto-Dreamwave manoeuvre, the inside of the comic is a lot more enthusiastic about the seasonal story, with the standard pages all cheerfully decked out with holly, Christmas pudding and presents. That just leaves the question of whether the comic itself is going to be the equivalent of Only Fools and Horses or as embarrassing as a Jimmy Savile hosted Top of the Pops.

With the regular team on their holidays, it's up to James Hill and, in his first ever Marvel work, Martin Griffiths, to handle the writing and art chores. This will be Hill's last work on the regular comic, though most readers would be getting his contributions to the second Annual whilst this was on sale, and in keeping with his earlier stories (the last of which, amazingly, was nearly a year ago), the fact he's a fan of the series shines through, with lots and lots of continuity references. 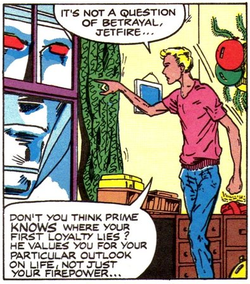 "There's more of gravy than grave about you"
The very fact the story is about Jetfire shows off his proto-fanboy credentials; both Furman and Budiansky basically lost interest in the Autobot flyer as soon as his toy no longer needed advertising (and as we discussed two weeks ago, when Bob did remember to write something for him he'd pretty much forgotten the jet's personality and background), but Hill has clearly seen there's still scope for exploring the character of the first Autobot built on Earth.

The main thing hampering this is the story length, Hill is clearly aiming for A Christmas Carol vibe, but with only 11 pages to play with he can only fit in the two flashbacks rather than the more traditional three that usually make up homages to that particular story, meaning it doesn't quite work as a spoof.

The story around the flashbacks is nice and simple, a distraught Jetfire visits Buster (back after a bit of an absence as well) around Christmas- but obviously before the schools break up as he has an exam the next day- for advice on what he's doing wrong with his life.

So we get one flashback in which he fails to act properly when following Prowl's orders and one where he does the right thing when human lives are in danger, making him worry that by being built on Earth he cares more about the locals than he does his own people. Buster tells him to take a chill pill and that caring about humans is a good thing (but then, he is biased) and Jetfire goes off happy.

It's light fluffy stuff and neither flashback has chance to be more than very briefly developed, but it's the tiny details that really make this a lot of fun. As said, Hill clearly knows his stuff and there are lots of lovely little callbacks throughout. From Tracks and Trailbreaker having been repaired after Target: 2006, through G.B. Blackrock's fuel deal with the Autobots via simple things like a sensible use of Kickback's ability to shrink like a real insect all the continuity nods are deftly handled and rather fun. 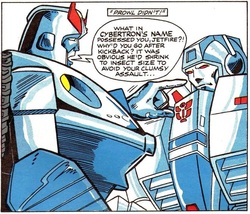 "And what was that Bumping Donny thing about?"
Hill also remains the only writer at this point in the comic's life who is even slightly interested in Prowl, and as Prowl is a strong contender for my favourite all time Autobot this is a good thing in my eyes. Here he is written in the cool efficient way that is now very familiar to us, but unlike in more modern interpretations he's not just being a dick for no reason, just there to be a straw-man to Bumblebee's increasingly inept leadership. Prowl is entirely right to chew out Jetfire for failing on his mission and it's really nice to see an Autobot other than Prime have some balls.

On the art, Griffiths makes a respectable début/departure even if some of his inner robot mouths are a bit odd. It looks as if he was very much influenced by Will Simpson's work on the characters, which is presumably why Editor Rimmer gave him a break as Simpson is still very much the book's number one artist of choice at this point.

Overall, this is typical Christmas fare, mainly designed to provide a light diversion for kids over a week where they're really not going to be paying that much attention to a comic. As such, it more than does its job even if it isn't going to linger hugely in the mind once you're into the New Year.

This week also sees the second A-Z, covering Beachcomber and Blades. Though the white box still hasn't been added, the text itself is much darker meaning you can actually read it this time. As a sign of how attentive the book is to its long term readers, Transformation assures those who remember than Beachcomber previously had a profile back in issue 45 that this new series has to cover those characters done before in order to be properly comprehensive, so please don't write letters in (I wonder if people still will?). 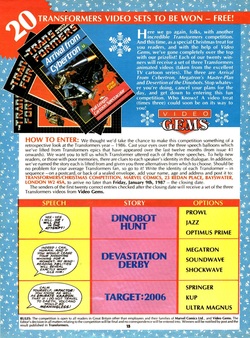 How many can you get right?
Spitfire and the Troubleshooters face the new monster sent after them by Krotze, a big black tank called Behemoth. At this point there seems to be one big problem with the series, in that all the villains Spitfire faces are only out and about blowing stuff up because they're after her, considering her ongoing doubts about what she's doing (resulting in a chat with a sensei about mystical bollocks Larry Hama would be proud of) you have to wonder why she even bothers with what she's doing. Also, after very nearly being useful last week the Troubleshooters themselves are back to bystanders and/or hostages. Or to put it another way: Dead weight.

In order to celebrate Christmas there's what is easily the biggest competition the comic has done to date, with the chance to win all three Transformers VHS' put out so far by Video Gems (which as I'm sure you know are Arrival From Cybertron, Megatron's Master Plan and Desertion of the Dinobots), as quaint as that might seem now it's about £45 worth of prizes when that was a lot of money and well outside the pocket money range of most kids, it's basically the equivalent of a comic today giving away three brand new Playstation 4 games. As a sign of how the prize is so much more valuable than previous ones the questions are just that little bit harder, you have to identify the speaker from speech bubbles taken from previous issues, requiring you to remember things that happened up to six months ago.

Robo-Capers gives us another one to feature the title characters, as two kids receive Ultra Magnus and Galvatron for Christmas and play merry buggers with them. Speaking as someone who had Magnus for Christmas either this or a year later I can attest to the complete and utter accuracy of this.

So, another year of weekly issues done and dusted with. The change in the style of the comic between the start and end of 1986 isn't anywhere like as drastic as it was over the same span of time in 1985, this year has been more about solidification of a format that Ian Rimmer has clearly found to work, and the British stories have generally gone from strength to strength (bar the stumble of the introduction of the Special Teams).

On the other hand though, the American reprints have fallen into something of a rut, we started (Joey Bloody Slick) and ended (Circuit Bloody Breaker) the year with strong contenders for Uncle Bob's weakest stories, and the best in-between have generally not managed more than light froth. As a result the comic itself has become really dismissive of the parent series for the first time, something that is only going to increase as we go into 1987 (and perhaps not coincidentally around the time the comic starts to be edited by the man writing the British stories), with the various antics of the American stories feeling increasingly divorced from the ever growing epic time travel story Furman is going to start building up.

As a sign of things to come, just try to imagine King Grimlock getting a call from Emirate Xaaron about sorting out Galvatron. It's impossible to visualise as the characters barely seem to be in the same Universe, let alone the same comic.

That's all stuff for us to talk through over the next 12 months though, but before that we have an annual and set of Collected Comics to talk about, both of which should be up before next Friday's entry.

However, before signing off I would like to point out this is the 100th entry in this series. I know what you're thinking, "Stuart, you big sexy man you, how do you get 100 out of 93? We know you have a special relationship with basic grammar and spelling, but does maths defeat you as well?”

Well my fine friend, you are wrong (except about the big and sexy bit), counting the three Addendums, one annual, one lot of Collected Comics, one Winter Special and the famous poster mag as well we have 100 pages. Thanks to all of you who keep reading and commenting, the average readership on an update day has crept up over the last few months (even discounting a retweet from splendid chap Nick Roche giving a massive boost last week), so I'm going to egotistically assume I'm doing something right even if some of the more recent issues haven't been the comic at its best. Here's to the next 100!

Also, you've a week left to take part in the TFA poll for the 30 top Transformers of all time, vote HERE to stop that penis tongued Decepticon from Kiss Players winning it. 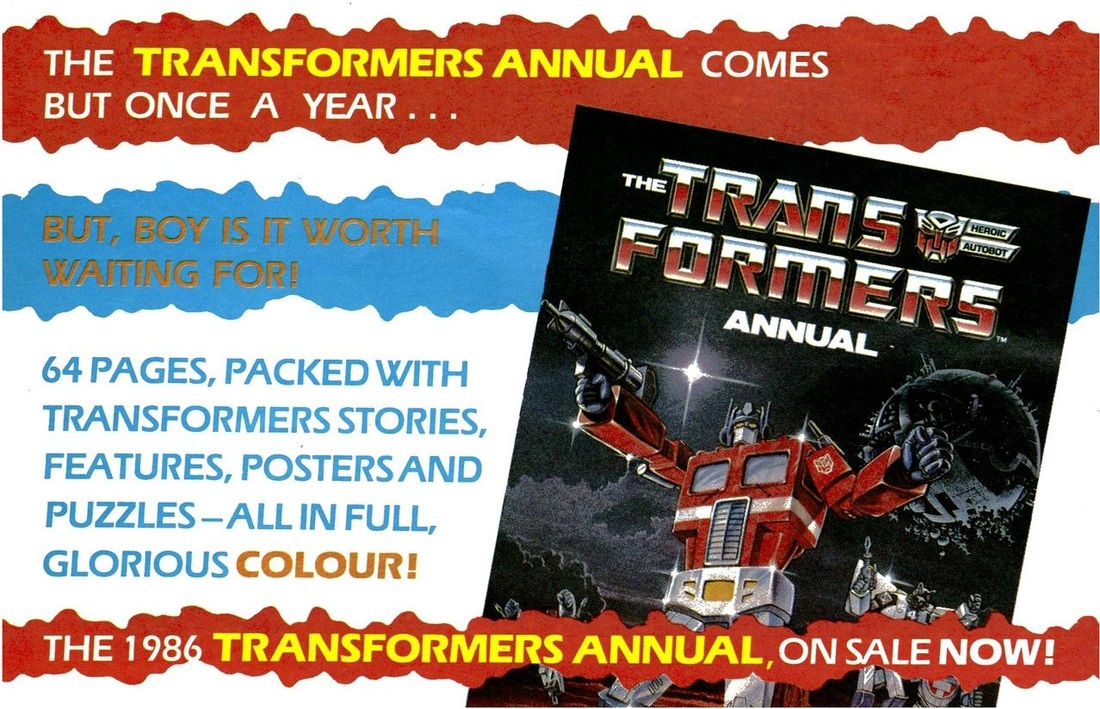