It's All About the Money. 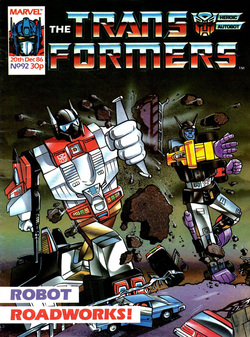 "Did that thing just shatter an overpass into dust?"

There’s exciting news to kick off this week as the brand new one off issue of Death's Head II, drawn by the mighty Nick Roche, has just been released on an unsuspecting world. Though it's part of a wider "Old Marvel UK characters" crossover, I found it mostly worked fine as a standalone outside the opening and ending, the story basically being a hugely fun fight between all three versions of Death's Head.

And yes, his adventures with certain giant robots do get a mention. What sort of a world do we live in where a proper Marvel comic is able to deftly include the British Transformers comic in an unobtrusive way but ReGeneration One can't? Still, depending on when you’re reading this, either wander on down to your local comic emporium, or but from Comixology HERE (if you’re a long way in the future the whole series might even be traded).

One Marvel adventure that's very unlikely to ever get a nod in a present day comic is the second half of Heavy Traffic!, what a smooth segway. In fairness to it, the opening does provide one good genuine laugh as the Stunticons easily deal with the same RAAT plan that took down Beachcomber's Buddies. Yeah, take that hardened Wolverine wannabe and resistance leader Blaster; your tactics are less savvy than a newly built thug of a truck.

Other than that though, the pickings remain fairly slim. We do get our first real Menasor/Superion fight, but as always the scale never really comes off very well on the page, not helped by Nel Yomtov's strange experiment to avoid as much block colouring as usual by instead having any character not front and centre coloured as if they were supposed to be a ghost in a very faded way. It's bizarre as it would surely have taken just as much effort to colour everyone properly.

That leaves the human side of things to carry the story, and in a story with Circuit Breaker in that is never a good thing. So stop me if you've heard this one before: In a situation where one group of giant robots are acting in a overtly EVIL manner by, say, attacking innocent trucks, and another group of giant robots are either acting in a heroic way to stop them or just sitting there, Circuit Breaker decides despite to attack the good ones first, allowing the evil ones to escape. What a twist.

I'd almost feel sorry for Donny as everyone ignores him trying to point out the obvious, if only he didn't keep banging on about money, asking Josie how much she gets paid (what, if it's a sufficiently large amount will he sign up for the silver sticky tape and gratuitous nudity?) and bemoaning how he'll almost certainly never get his check back in a deeply unsubtle bit of foreshadowing for the end of the issue. 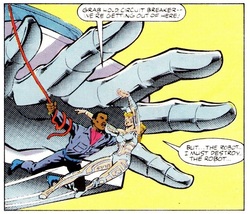 I try to avoid the most repeated images... but well.
Amazingly, it's Walter Barnett who manages to get all the good bits in the issue. He's the only human with any common sense, pointing out some of the robots have been shown to behave differently to others, and also gets the one and only good line in the issue when he reacts to Superion ripping up an entrance ramp (a ramp that seems to have been covered by cars in the previous panel, and this is the Aerialbots after having their morality sorted out?).

Mind, he also gets the biggest, most bat-shit insane moment of the entire story as, when Circuit Breaker finally decides to go after Menasor but realises she's out of power, he grabs a rope hanging from a helicopter and swings into catch her as she falls. Obviously the thought of getting his hands on a virtually naked woman has made him forget he's not in a Joel Schumacher Batman film.

It's probably lucky for the Stunticons that RAAT did show up when they did, and that they're led by a complete idiot because otherwise it's hard to see how their plan to discredit Skids would have worked. I mean, they drive up and attack some cars around him whilst forming a defensive perimeter to make it look as if they're protecting him from something, but if RAAT wasn't there to attack them there'd be no obvious reason for them to do this. Indeed, with Skids stubbornly staying in vehicle mode if Superion hadn't shown up as well all they'd have been able to persuade humanity is they're on the side of Japanese import cars.

Which would piss off Larry Hama (I've just finished rereading the original G.I. Joe comic and a xenophobic rant about buying cars made by any country America fought a war against forty years ago shows up about every third issue), but probably not many others would be that bothered. And Hama would probably quite like Motormaster having a big ninja style sword, because his credo in life is "If you're not a ninja, you're a minger".

What's especially daft, and takes away from RAAT's success in capturing Superion, is Skids just drives away with no trouble whatsoever. Barnett can't even keep hold of Donny, but then the former Robot-Master probably isn't naked enough for him to be worth coping a feel of. Well, at least not yet, but if the money is good enough who knows what might happen? 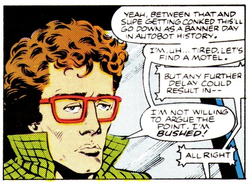 Nothing suspicious here at all.
Luckily for RAAT, Skids is even more stupid then they are, knowing he's hunted by two different groups (and apparently it never occurs to him to wonder how the Stunticons found him, nor to phone the Ark to tell them about what's gone down) and still travelling with a human he actively hates and is acting in a very suspicious way by insisting they stop for some sleep even though that increases the amount of time he's in danger... He still has the human press his snooze button. Would it really be that hard for him to stay awake on guard for the night?

This results in Donny getting straight on the phone to Barnett (is he really listed?), and hands Skids in for a fifty grand pay day. Which may or may not require semi-nudity on his part as well. What a twist.

The stated aim with this project is to always try to look for the positive, fun stuff about each issue on the grounds that eight years of depressing moaning wouldn't be hugely entertaining, but this really is a very poor story with not a huge amount going for it beyond a couple of nice lines and solid art from Don Perlin.

More cheerfully, with a week to go till Christmas the rest of the comic is building up to a party mood, with most of Transformation given over to bigging up the special story, in the vague hope kids haven't completely lost the will to live after reading the main comic. Robo-Capers is also in the seasonal mood with a robot Santa who refuses to work Christmas day. 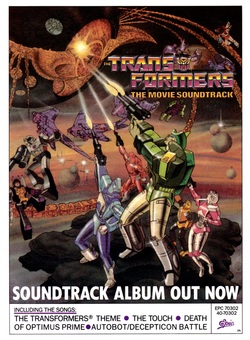 A rejected UK poster for the film perhaps?
There's also a competition and full page advert for the soundtrack of the film, the former of which is slightly unfairly mocked on the wiki entry for this story. But as I learnt from my own Christmas quiz, it's best to aim the questions at the mental age of your readership, and in this case the readers with the mental age of children actually are children.

Yeah, I just mocked all of you. What are you going to do, stop reading?

The advert for the soundtrack is interesting in that rather than using the cover art or the film poster, it uses a real mish mash picture that seems to throw together elements from various images, including actual film art and what looks like screen grabs from the cartoon. Though it's a mess the fact it'll go on to be used as the cover of more than one video release (usually of episodes having nothing in common with most of the images on it) means it creates a nicely nostalgic glow in my belly.

In Spitfire and the Troubleshooters the Troubleshooters actually do something for the first time, with The Jock One making some super gauntlets that let him break into the villain's secret lair, driven by his overwhelming desire to shag a woman who is also his teacher. Which is actually kind of creepy, I wonder if this comic was a seminal moment in the life of that one teacher who ran off to France with his student last year? Still, there is foreshadowing for future developments as it turns out Krotze is actually the front man for a much bigger and nastier mysterious group. Though whether this will be even slightly paid off before the comic drops this back-up remains to be seen.

What's really exciting is we have an advert for the Poster Magazine at last! Still with only a very vague release date of sometime in January (which makes the cover date of 86/87 a bit odd), but that's close enough for me. As if by magic this advert is now used as the "Next" box on the entry for the Winter Special. It might be worth mentioning at this stage that a kind soul pointed out on Twitter that I really shouldn't have been so surprised by the existence of the Poster Mag as it was actually included in the completely off its tits "Oh shit" animated music gallery... thing on the original British DVD of the film. I must have blocked that out of my mind.

Next week it's Christmas! Which also means entries for the second Annual and all the 1986 specials, of which there are more than you might think. But for now you'll have to excuse me as a man who looks amazingly like Billy Dee Williams has just offered me $50 grand to wear a silver sellotape outfit and let him have a feel, time to go shave my legs in readiness.


ADDENDUM 3: THE TRANSFORMERS: THE MOVIE 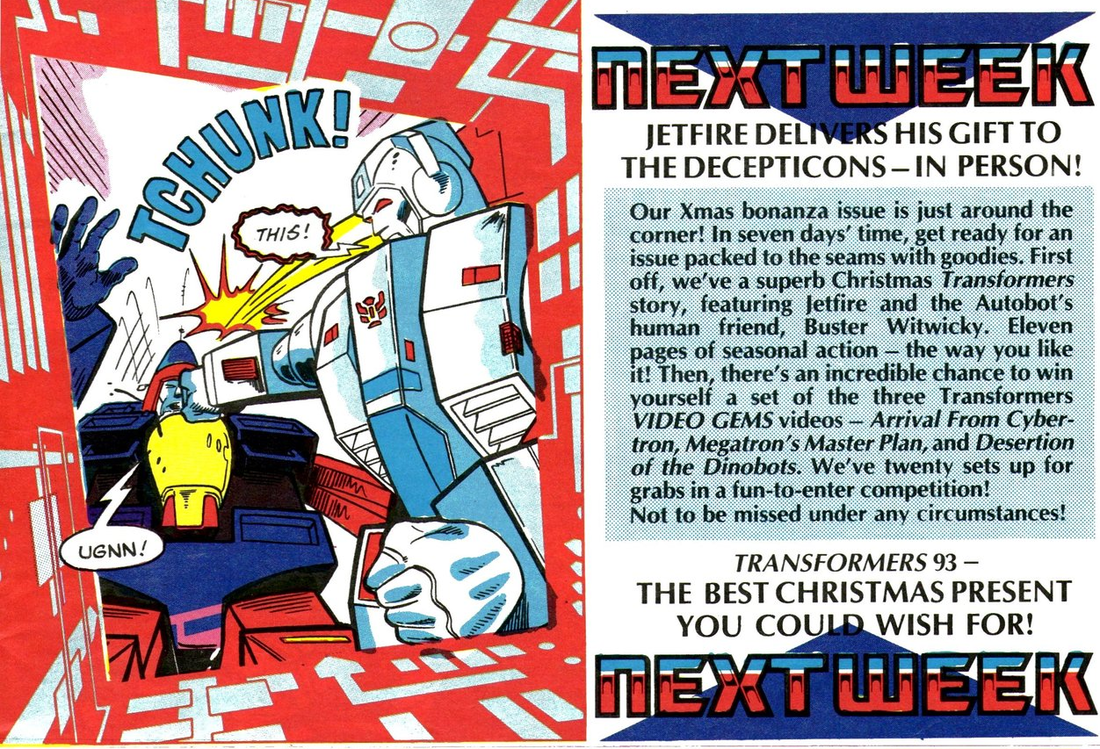