They're Sharing a Drink They Call Loneliness, But it's Better Than Drinking Alone. 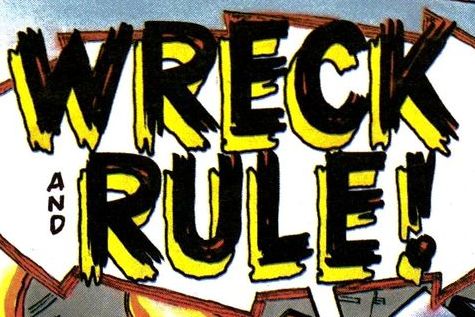 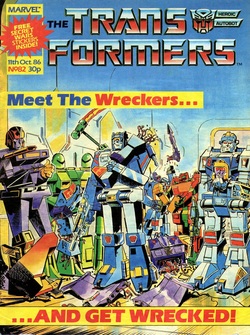 For the second week in a row we've got a cover that reveals all sorts of lovely little details when seen at full size, in this case the fantastically smug expression on Topspin's face and the marginally annoyed one on the head of the decapitated Blitzwing are both drawn to perfection by Phil Gascoine.

Behind the cover we get an interesting and brave decision to leave the main story behind for a week, a choice that could only have been made possible by the unusual length of the story and one that the Transformation is at great lengths to reassure readers about.

So, instead of following up on the Ironhide and Megatron bromance, the story moves to Cybertron and shows up the preparations for Operation Volcano, with a fantastically bloodthirsty sequence of a group of Decepticons being massacred by the Wreckers.

It's all a training exercise with facsimile constructs (the first time the term has applied to robot doubles rather than human dummies), but nicely sets up the real power of this group without actually having to sacrifice any real named Decepticons or just use generics. The panel of "Shrapnel" getting harpooned through the head is especially nasty, to the point that when it showed up in my Facebook feed as the image picked from my promotion of the last issue (where it had been the centerpiece of the Next Week box) it made my mother comment on how needlessly gruesome it was. But what do girls know hey?

What is perhaps strange is how much this reads as a typical piece of promotional work for a whole bunch of new Autobot toys, but the majority of the Wreckers are either comic only characters (Rack and Ruin, who hasn't quite decided how to parse his name yet) or those that were never released in the UK (Whirl and Roadbuster), leaving just the Jumpstarters to fly the flag for British toy shelves. 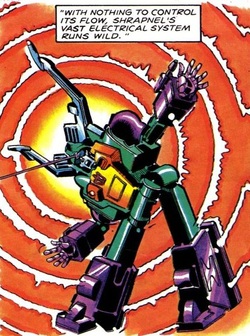 Frying tonight!
So the only real purpose of the scene is to set up how the events we'll see in the final part of the story should play out (though of course, it will all go wrong) and to again emphasise the raw power of Ultra Magnus as, even with all their skills, the Wreckers can only hold off the full force of Decepticon reinforcements with his help. So Impactor declares Volcano a no go and, as he leaves to go tell Xaaron they're pulling out encourages his troops to go have some fun. Which he seems to regard as going to kill some Decepticons but they decide they'd much rather go on the piss.

In a story full of firsts it's easy to overlook the introduction of Maccadam's Old Oil House as anything especially important, especially as it will only feature in one subsequent Marvel story. But this is the first time we get to see Transformers in a true social situation, just kicking back and relaxing rather than being involved in just plot or action based situations. It's something that will become increasingly common, to the point where More Than Meets the Eye uses the ship's pub as the way of letting all the disparate characters interact.

Despite that book being written by a confirmed Marvel UK fan there's actually very little in common between Swerve's- generally a happy place with a loud atmosphere- and Maccadam's- a technically neutral bar where you keep to your little group and under no circumstances get involved- but the underlying, very British, attitude is the same. The important people aren't the big movers and shakers; it's a bunch of mates sitting in a pub talking toot that matter more than anything. It's a philosophy that's right out of a Robert Rankin novel.

Though if Furman was ever aware it's the everyday normality of these scenes that appeal he seems to have forgotten in the intervening years as the rather groan inducingly poor Ultimate Guide book would later see him try and suggest Maccadam was far more important than he seems and really part of all that 13 gubbins (don't worry if your unfamiliar with the attempts to make the 13 a part of older G1 fiction, yours is a happier world). Compare that to his counterpart in the Rankin books, who is only the part-time barman. 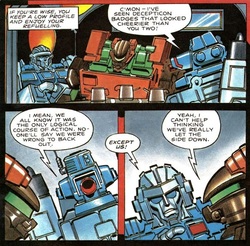 Whose round is it?
Of course, having started down that road, it'd be easy to try and compare each member of the Wreckers to a patron of The Flying Swan, but as that's probably too obscure for even this crowd I shall refrain. Though Topspin is definitely Normal Hartnell (not to be confused with the other Normal Hartnell). However, I shall fill up the rest of my thoughts on the bar scenes with Rankin catchphrases as it's a tradition, or an old charter or something.

Whilst drinking, the Wreckers are someone conflicted over whether their decision was the right one, and luckily someone comes in to act as an analogy to their issues. The (absolutely fantastically designed) piano-bot has annoyed a (also pretty nifty looking) large angry green Decepticon called Fang and gets kicked across the room as a preamble for a beating. And in the grand tradition of bust ups in pubs everyone, even the lady in a straw hat, carefully keeps their eyes down on their drinks, with Twin Twist even being told by Roadbuster "This isn't our fight!"

We then cut to Emirate Xaaron's office (where no doubt there's a photo of Ian Richardson hanging on one wall), where the conversation goes pretty much as you'd expect by this point as the politician carefully manipulates the soldier into putting the Volcano training back into place "Just in case" Magnus makes it back in time. Perfunctory as it is though; it's still a nicely done scene though with the two characters really playing off each other perfectly at this point.

Back at the bar, Twin Twist has decided to act, and lacking a big spinning machine gun like the one Blain had in Predator, he has to make do with a cry of "Wreck and Rule!" and a good punch. Though in the only real art fail of the issue, and I suspect this is more down to how rubbish Twin Twist's toy than Ron Smith's talent as an artist, it looks more like he's doing aerobics at the Decepticon rather than anything particularly violent. Though there is some retroactive fun to be had in the fact that Fang- who has been made a big bad ass member of the Decepticon's top killing squad in IDW's continuity- is completely broken to pieces by one thump from a drunken midget.

So, with Impactor having had his arm twisted and the Wreckers having learnt from the power of beer that you can't stand by the sidelines they reunite at the arena the Volcano plot is going down at to resume training, and the issue closes as it opened with the now legendary cry of "Wreck and Rule!"

The big flaw in this issue is that it advances the plot in no way shape or form whatsoever; bar giving you an idea of how Volcano will work which is at best a minimal contribution. Otherwise you could skip the entire installment without even noticing.

However, as a standalone story, it's extremely well done, has some great action coupled with neat art from Ron Smith (though his Xaaron seems to be on steroids) and the pub atmosphere adds a nicely different feeling to anything we've had before. It's taking the story into a diversion, but it's a fun diversion none the less.

Plus of course, the Wreckers are second only to the Primus back story as Furman's biggest overall contribution to the franchise (even if they've only become ubiquitous surprisingly recently, even in their first modern appearance back in Dreamwave's second mini in 2003 is very coy about referring to them by name), making this pretty much essential reading for anyone looking to see the seeds from which the versions used by IDW, Prime and films grew from.

A proper answer!
As you may remember, back towards the end of his run Soundwave had an issue where Furman seemed to be on holiday and it felt as if the work experience boy to be filling in with out of character and mildly rubbish answers. This week Grimlock/Furman gets to correct that as he tackles the question (re-asked by Jamie Cartwright from my local stomping ground of Solihull) of what Robot Points are for and gives a proper answer. Unlike in America where you could use them for all sorts of mail away toys, here three points plus £1.99 will get you a 30 minute audio tape with an amazing adventure of the Special Teams on it.

Sean Stafford from Swansea gets to become the first person to bemoan the wiping out of most of the Decepticon forces by Omega Supreme, beginning a long "1984 is best" trend that lasts to this day.

Hercules begins ...Not Just Another Galactus Story!, which in keeping with both his adventures to date and the theme of the issue as a whole involves the consumption of large quantities of alcohol. Is there anyone in this comic not nine sheets to the wind?

Next week we return to the plot and Megatron, but two things to mention before that.

First, the series of articles I've helped contribute for TFArchive's Countdown to 30 series is nearing its close and has some very good stuff from a variety of authors that is well worth a look HERE.

Secondly, my experiment at a Christmas Quiz is now up and running and can be found by clicking the link below, complete with prizes! At least one of which is good. I'm not entirely sure how well this will go, but if it works out OK this may become an annual event.

Now, if you'll excuse me, the sun is over the yard arm and mine is a pint of Large.