And It Seems I've Been Buried Alive. 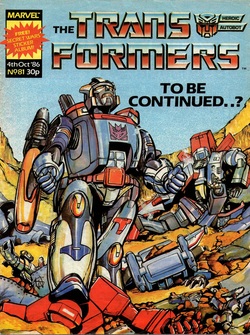 You're not even worth killing!

I mentioned a few weeks ago that it's amazing what a difference seeing these covers full size can make when compared to the smaller reproductions included with the trade reprints, and this issue provides a more flattering example than Prowl's piss hands did. Will Simpson has included all sorts of lovely little details that are best appreciated in A4, for example I've never before noticed just how worn out Jetfire looks in the background. It's an appropriately grim cover for the darkest instalment of the story to date, and arguably the most experimental issue of the entire series thus far.

I also mentioned a few weeks ago Furman's development during In the National Interest of his technique of opening with a flash-forward as a scene setting technique, here he takes that to the ultimate extreme as the entire story is framed as a flashback told by a beaten, battered Ironhide as he digs up... Something in the Wyoming quarry and desperately thinks back on how the hell he got into this mess and if there's anything that suggests a different solution to the desperate one he's considering.

It's an extremely effective device, instantly setting up the fact we're heading towards something truly nasty and dark, and gives the confident gung-ho attitude expressed by Jetfire and the other Autobots as they prepare to take on Galvatron an extremely macabre feeling. 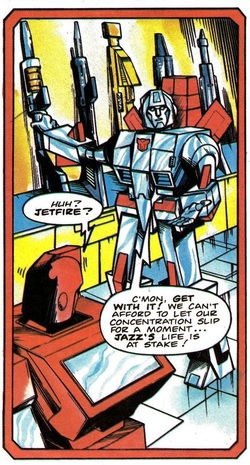 I'm the leader as I have the guns.
Of course, for those of us who came to the series later this issue is also given a little extra buzz because it's the one after the attempted Collected Comics reprint of the whole story came to a crashing halt for reasons we'll discuss when we get there, even now the best part of a decade since the Titan trade it still holds that "At last I get to see what happens next!" excitement for me.

Before getting into the nitty gritty of the (fairly simple, it's basically a big action scene) plot, I should give some special praise to Jeff Anderson's art, before starting this project I'd have described myself as not holding his work in huge regard, mainly for the sin of not being Geoff Senior. But time and time again I've been more impressed by his work that I remembered, and here he's at his absolute peak. The image on the opening page of a empty eyed Ironhide with Galvatron's boot on his head (something that, when we see it in full context in a further flashback later on seems to be deliberately suggestive of his death at the hands of Megatron in the film) is especially striking.

Anderson is also careful to keep the present day and flashback panels distinct visually from one another with his red framed borders around the later, it's only a small thing but it helps the flow of the story and means it can cut between the two time frames easily and without the need to spell out the change every time.

Within those red framed flashbacks we see the folly of hubris being carried out by Jetfire (who has actually had a bigger role in this story that I remembered, I think that, bar his Christmas showing, it’s his last real chance to shine), who, laughing in the face of his colleagues with millennia more seniority, has taken command of the Autobots and is preparing a massive attack on Galvatron, an attack which a still wonky Hound considers doomed to fail. However, no one likes Hound so his concerns are ignored, even if he does manage to persuade them to try and get Ultra Magnus to join in.

Which turns out to be an offer Magnus can refuse; he’s so myopic in his quest to find out what happened to the Matrix and Optimus he has no time for distractions, or even explanations as to why it’s so important he’s working to a tight deadline. The surprise here is how similar this is to IDW Ultra Magnus (or at least the Furman written version), a take on the character I’d previously not liked for completely missing what I had considered to be the core of the Marvel version.

But here, at his beginnings, he is very much the rule bound stickler for duty, and suddenly I can see the link between the two continuities. The difference of course, is this is a learning experience for Magnus that will end with him as the more familiar, more intuitive and willing to take risks Marvel version. He gets to be one of the few Transformers during the Marvel run to benefit from genuine character development, which is hardly surprising when you consider his profile in this issue clarifies he’s effectively a newly born here who likely hasn’t yet worked out who he is properly yet.

Still, past-Ironhide is dismissive of Magnus’ refusal to join in, and despite an initial set back (including an inadvertently hilarious image of Mirage taking on Cyclonus and Scourge in his F1 car mode, how fearsome), it seems as if Jetfire’s initial confidence is well placed as the two Decepticons are seemingly beaten and the Autobots get right up to Galvatron.

Sucks to be Mirage.
It is of course a trap, but an interesting one and makes a good place to talk about Galvatron’s attitude. He’s somewhat unique amongst time travelling villains in that he has no desire whatsoever to change history in any way shape or form. After all, in his present the Decepticons rule Cybertron, he’s just destroyed Autobot City; killed Optimus Prime and been given a shiny new body. From his point of view, 2006 is just about perfect. The only blip is Unicron, and his plan here is just to have the time to build a weapon he can use in the “Present” day, not to affect the past even slightly. After all, even something as simple as destroying Unicron now, even if that were possible, would deny him his new form. Later issues will show he’s very up on his time paradoxes and his clearly doesn’t want to jeopardize everything he’s gained in the last 20 years.

This need to keep things stable has motivated every decision he has made thus far in the story, and he’s only interacted with the 1986 characters as and when he’s had to. So, he tried to ask nicely for the Constructioncs because he needed them, and only became heavy handed when they were refused him. Equally, despite having the power between himself and his two lieutenants to kill all the present day Autobots he has shown no interest in them except when they’ve gotten in his way, and he’s no desire to just wipe them out because he believes that such wholesale change will remove him from the future he wants to get back to.

This means we have that rarest of circumstances, a situation where the villain having the heroes at his mercy and not killing them actually makes sense. Instead, Galvatron gives them a lesson, showing how useless their guns are against him by letting a full barrage be unleashed upon him (a nice callback to Megatron doing the same with the US army back in the original mini) and them rubbing salt in the wound of the Autobots impotence by beating the hell out of them but purposefully letting them live, it’s only their spirits he wants broken.

It’s a brilliant, harrowing sequence that perfectly meshes great art, colouring and some great writing on Ironhide’s fatalistic narration. We then return to the present, and the revelation of what Ironhide has been so desperately digging up despite his misgivings, the thing he hopes will give the Autobots direction and leadership…

After all the build-up of the first three parts, this is where things really kick off and the screws start to be tightened on the readers nerves, and is a strong contender for best issue of the story (but expect me to say that a lot as we go on). It’s just a shame us Collected Comics readers were denied it.

It's so secret, I don't have it.
The epilogue back in the Ark setting up events for two issues time with Starscream escaping from stasis on the Ark is almost small potatoes compared to that, but at least it’s setting up plot even if it’s not as effective a cliffhanger as the Megatron reveal would have been.

As mentioned, one big exciting extra we get this week is a special profile on Ultra Magnus, which, unlike pretty much every other profile the comic has done and will ever do, isn’t just a straight rehash of his tech specs/Universe profile. There’s still a lot of that in there, but it’s pumped up with story-specific details about how Magnus was specially created by the Matrix flame in order to give the Autobots on Cybertron new hope and to lead Operation: Volcano. This adds all sorts of background details to what we know about him that makes him just that little bit more of a richer character, and- impressively for something done as a bonus that was likely quickly forgotten about- won’t even be contradicted by any of his future appearances.

There’s also a more substantial bonus free this week with the Panini Secret Wars sticker album, though as this is another gift I’m missing I can only guess at the contents, though it is perhaps odd it’s being given away with this book rather than Secret Wars II, which is having to make do with some free stickers instead (unless it was a free gift with both books and Transformation just doesn’t want to mention it?). Either way, it can be taken that the previous sicker album must have been a big hit with readers.

Hercules ends his penultimate adventure by saving the planet but the issue ends on the revelation of which giant planet eater is behind the entire plot… Unicron!

No, wait, Galactus. I do wonder if there was some deliberate irony in the choice of a mini-series featuring this character being picked as the back-up at the same time the main strip is doing a story introducing one who has more than a few similarities to old purple horns. Or it could be a massive coincidence.

Next week, a small diversion to Cybertron and the introduction of some iconic characters.  But before that, some shameless pimping if I may.

First, if you’ve not yet seen it, for my review of The Day of the Doctor. Secondly, all round nice fellow and Transformers Marvel UK lover Kris Carter (who has done colours on several IDW comics as well as his own projects such as Lou Scannon) is doing a trade of his early fan comics, with the profits going to the Samaritans. His work is always excellent, and a more in-depth talk about the reasons behind the comic and how to pre-order can be found HERE. 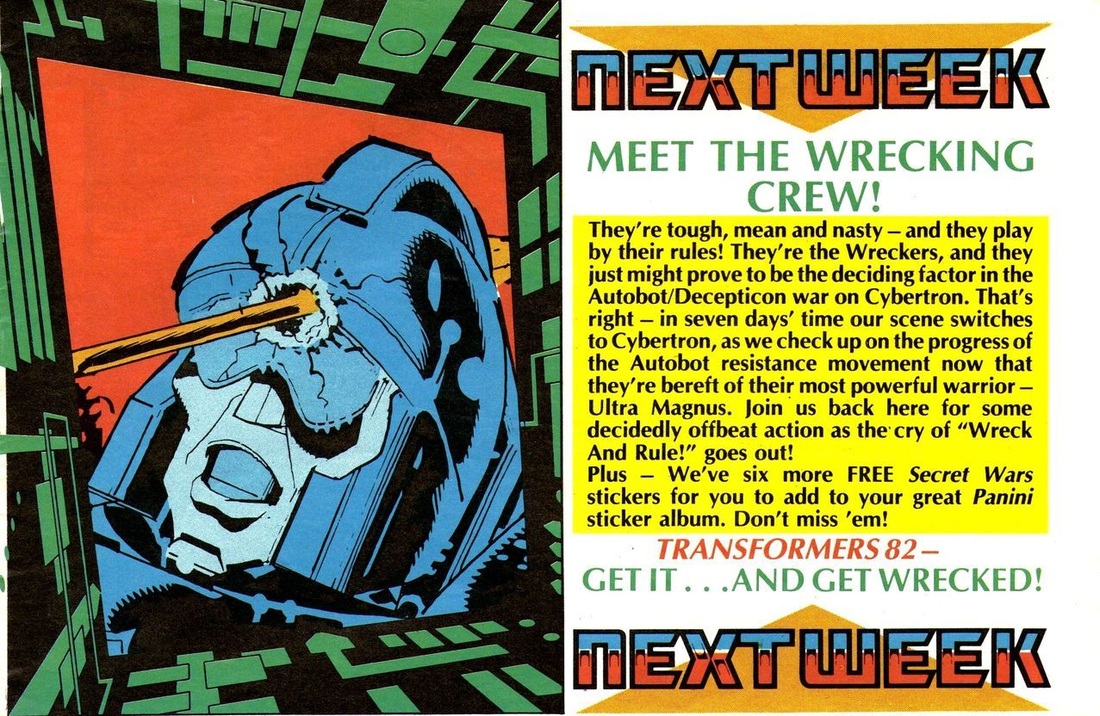