They're Just Flying To Close To The Sun. 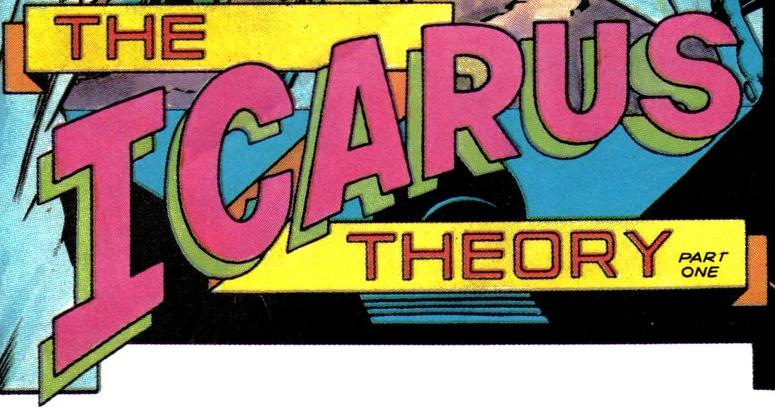 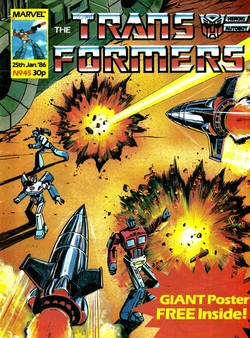 
They just stuck their heads in the sand... Big fat ostriches in business suits.


Arc is a word we often retroactively use to describe old Marvel storylines such as Matrix Quest, but that wasn't how we (readers at least, I'm not sure what terms they used behind the scenes) thought at the time. Transformers was just one big story broken up into smaller multi-part chunks. However, to use the modern parlance, The Icarus Theory kicks off a six week arc that will culminate in the big honking half century celebrations.

What's really impressive is Furman extends this arc back three weeks. He does this by having a hesitant Prime visiting the recovering Bumblebee only to have to rather sheepishly accept the apology he'd intended to give from the Minibot for disobeying orders, before he can get his own out.

It's a nice touch from Furman that's not only a good character scene, it takes what would otherwise be a standalone story in Crisis of Command and makes it part of the ongoing narrative, creating a two month arc. Which in turn means of the British stories since Decepticon Dambusters! only Christmas Breaker! hasn't been part of The Bigger Picture.

And so of course, despite this being one link in a chain and (as it will turn out to be) a direct sequel to one of those previous stories this was still the earliest of his issues Furman allowed to be reprinted when he had editorial influence over the Titan books. This slightly revisionist approach to his past, and in his opinion disappointing, work is something I've berated before. The UK Classics series is really the first chance anyone has had to revisit this story in context of those around it, and that's important because this simple little two parter is a major stepping stone in the evolution of the title.

What's evident right from the start is Furman is continuing to develop and play with his writing style. The issue opens by inter-cutting between new character Professor Morris angrily fishing in a man made reservoir and flashbacks to his humiliation at his employers Roxxon the day before. Where he tried to convince the bored board that the mysterious giant robots terrorising the country are actually secret inventions of G.B. Blackrock himself.

No one remotely gives a toss and won't listen to his pleas for funding on his own robot project. We then see him venting by using his robot controlling helmet set up to have the one and only primitive machine Roxxon has let him build rip up a dummy. 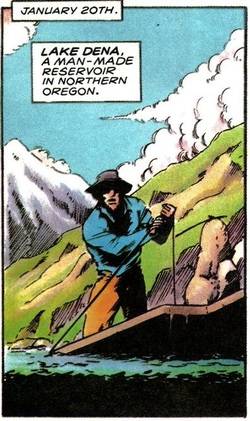 Seems fishy to me.
This moving from present to two scenes in the past is deftly done. It not only establishes our guest human's character and motivation (I especially love the detail of him being such a stubborn bugger he'll continue to go fishing in a reservoir he's never caught anything in because there are no fish there) but it also introduces the McGuffin of the mind control machine and does both in a more interesting way than just straightforward linear storytelling would.

There are two other things to note about this opening before we hit the reveal. The first is that, unlike their American counterparts, the British team have decided to keep the book in general Marvel continuity. Something evident for the first time since the Savage Land in the use of Roxxon (a company rival of Stark Industries, it's telling here they're in opposition to knock-off Tony, Blackrock) and a Daily Bugle front page. That's small potatoes at this stage, but by keeping things Marvel the book will later be able to be the springboard for Furman's most successful extra curricula activity.

The second is that, in firm chronological order, this issue is set from the 19th to the 25th of January 1986. Or to put it another way, the entire week the comic was on sale. That's the first time we've had specific dates mentioned anywhere in the fiction, and establishes the trend that the UK will keep the stories set roughly in real time (as opposed to the "comic time" Marvel more usually adopt and which the American series could easily exist in) and as close to publication as possible. Having a firm grasp on when the present is will wind up being very helpful when we get into time travel, and despite a small cock up around Arialbots Over America! this will generally be very well executed and ensure the 8 year run of the book really does feel like 8 years.

But of course, the real big deal is the Transformer Morris catches as his first ever "bite". He must have more strength in those weedy little arms than you'd guess from looking at him.

You're obviously supposed to at least briefly entertain the notion that Mr Mystery is Megatron, something hinted at by Transformation's description of it being someone who is missing and damaged. Which how we last saw Megs as he was buried in ice, but as far as the readers was concerned SPOILERS Swoop wasn't lost, he was atomised.

Ouch.
The idea that it might be Megatron is quickly discounted though as Morris- planning his revenge on the "Evil" Blackrock- gets to live one of his dreams vicariously through the mind control helmet as it turns out his captive is a flier. The scene of Morris getting to experience flight through the eyes of another not only gives the story its title, but is rather sweet.

However it quickly turns into on of the darkest and most memorable moments of the entire run. A security guard at Roxxon becomes wise to Morris working off the books and attempts blackmail. With terminal results as the Professor inadvertently strikes out with his mind and his avatar does likewise with his claws. The result is a broken body and not one but two panels with blood on. It's played completely straight, and is staggeringly strong for a kids comic.

It's not just gratuitous "OHHHHH look how grown up we are" bollocks either. Such as, say, Megatron killing some mercenaries who don't matter in the first Dreamwave issue. It's an essential moment in the development of Morris as his initial disgust and desire to turn himself in give way to his raging hatred of Blackrock.

That just leaves us with the shock reveal as the Ark (it's never actually revealed how Morris found out about the ship as till now there's been no sign anyone but Blackrock and the Witwicky's know about the Autobot base. You'd have thought Fortress Sinister would be the more obvious target) comes under the vicious attack of... Swoop!

With the highlight being the guard's death, the cliffhanger can't quite manage to achieve the impact it might otherwise have. It's not helped by the otherwise strong art from Barry Kitson seemingly struggling with crowds of Autobots. Prime suddenly has a lot of generics under his command, plus Jazz wearing Grimlock's head for the day.

Despite that, this continues the strong start to 1986, and almost perfectly demonstrates all of Furman's strengths. 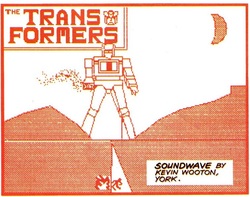 I avoided the wank gag this time.
This week we also get a Minibot poster, apparently to thank readers for the comic's success. Which is nice, and likely suggests this is the point where the little toy comic that could started to vie with the venerable 2000AD on a weekly basis for the best-selling British comic, an understandable source of pride for Furman.

But it's on the (sadly shrunk once again) Soundwaves we get the most mind-blowing piece of art in the entire issue: The first ever Transformer drawn on a computer. Welcome to the future. Compared to that, Iron Man fighting various Spider-Man villains set free by Doctor Octopus just can't compete.

Next week, the Swoop hits the fan. 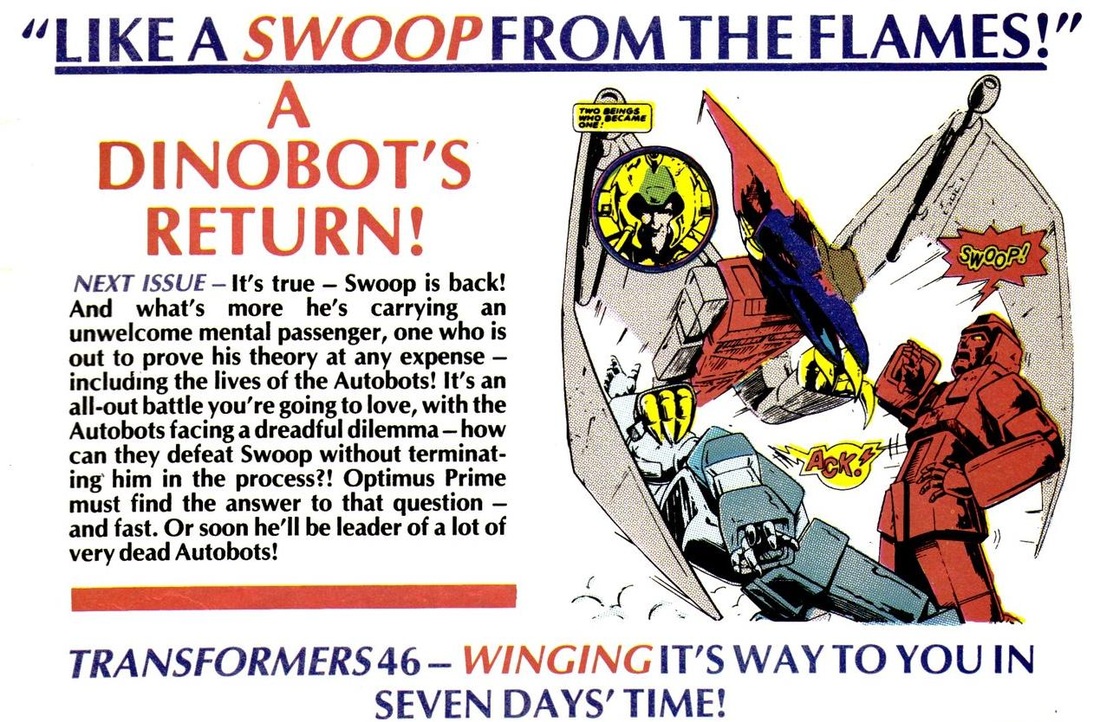