...And His Fist Be Ever Ready For A Knock Down Blow. 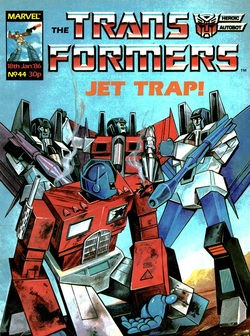 
One of the several nice comments this blog has received since it launched came from a cool dude called Nick this week, who described it as one of the highlights of his week (OK, online highlights. But that's the same thing to the nerd army, right?). And I'm going to repay this kindness by making him the centre of a torturous analogy about this issue.

You see, I suspect that if, during the course of the next week, Nick were to have wild passionate dirty skanky sex with Kelly Brook (or George Clooney, or Masterpiece Prowl. Delete according to preference) this site would slip down his list of highlights. Even at my funniest, smartest and with the best placed deliberate typos competing would be very hard. And that's what this week's artist John Stokes has to contend with in our first case of post-Senior come down.

Bad Ass.
Even though this isn't his best work (and he still has some funny ideas about Bumblebee's head, though it at least keeps the same design throughout the issue this time) Stokes is a generally solid artist, who produced some good iconic work for the Annual. But after the revelation that was Senior's work over the last two weeks it can't help but seem anything other than shoddy. Especially when you compare the BIG fight between Prime and the Seekers here- with its awkward poses and lack of energy- to the dynamism of the Bumblebee smack-down in Part 2. It's enough to make you weep.

He's not helped by some unusually poor colouring from the normally brilliant Gina Hart. On the opening page both Sunstreaker and Wheeljack look very odd as a result.

That isn't to say that there aren't some highlights for Stokes though. There's an especially fine panel of a bruised but not beaten Prime confronting Soundwave that I'm fond of thanks to its reuse in one of the Annual "Story so far" recaps, where it will be used to represent Prime's first "Death", and a far more dramatic way of presenting that story than any of the art actually in it.

Outside of the art decline, this final instalment is basically a well executed fight issue. It's both a cliché and more than a bit silly for Prime to go rescue Bumblebee by himself. After all, he's both the leader and the only baby making machine for his entire species, far too vital to risk on a macho cock waving mission. Plus, him beating all the Decepticons by himself makes you wonder why his army can't do that collectively (and his excuse for running off leaving the Decepticons chance to recover is even more flimsy than back in issue 40). It really makes it feel like no one but Prime is really trying.

We lost Some Soundwaves for this.
What makes it work though is the character details. This is the first of several times Prime will work through his emotional issues with extreme violence, something that seems to be fairly cathartic for him and a character traint that's sadly been forgotten by (you've guessed it) Regeneration One. Hill's hand in the writing is in evidence from Prime taking inspiration from And There Shall Come... A Leader! and Emirate Xaaron in order to keep on fighting. This is excellently timed, coming just a few weeks after children would have opened their Christmas presents when the story would be most fresh in their mind. It also paves the way for Xaaron joining the comic proper.

Starscream: LEADER KILLER also gets some good work, his arrogance turning to cowardice as Optimus deals with Thundercracker and Skywarp. Not only is it really easy to hear Chris Latta's voice, his full of himself opinion that he's the ultimate warrior is what finally persuades Prime such things are a bad idea and that the Matrix won't be used for that purpose.

The end sequence of Prime, back to his confident best (for now), talking down Prowl's suggestion and reasserting his authority over the rank and file is nicely done, but there's a problem here related to the inherent need of the comic to pimp the toys.

Optimus decides using the Matrix just to build warriors would be wrong. But as 1986 goes on he's going to get a magical mystic message from the Matrix saying "Yo dude, build some ultimate warriors!". Which leads in rapid succession to Protecobots and Arialbots and (seemingly off Prime's own bat) Omega Supreme.

Now, you can argue the toss about some of those (Omega is built for strictly defensive purposes, the Protectobots are to provide front-line help and rescue rather than combat), but that's largely semantics. Prowl will wind up getting his way thanks to the most powerful ally of all: Hasbro.

Despite this making the ending somewhat redundant, Crisis of Command! is a fun, tight little story that comes in, does what it sets out to with the minimum of fuss before exiting stage left. The two authors collaborate well and it's a shame neither one would return towards the end of the comic's life when working on both the UK and US stories began to take a toll on Furman.

This issue has one of the great injustices of the entire run. Soundwaves is shrunk down to make way for an Iron Man recap. Which is a pity as he's on fire this week, coming up with some top notch quips. My favourite being his response to Gethin Thomas from Croston when he points out the Beano has a fan club, so "Could you start one?". "I refuse to start a Beano fan club" being the response with accompanying wah wah wah music.

You probably had to be there.

It does raise the interesting question of why there wasn't any real effort at a formal UK fan club beyond the most tokenistic attempt at S.T.A.R.S. though. Just about everyone else and their dog had one during the '80's so the absence of one for Transformers is fairly conspicuous.

Iron Man manages to fight the spare arms to a standstill, and has a flying car for no readily apparent reason.

Matt and the Cat... Jeeeeeeeeezzzzzzz. If they needed to shrink something down why not this?

As one final observation... Thundercracker is doing the classic "wanker" hand gesture at Prime on the cover isn't he? No wonder he looks so happy. How has no one noticed this before? Lets start a whole internet meme of "Thundercracker Says You're A Wanker" images to rival the Picard Facepalm.

Next week... Well, based on the Next Issue page Magneto in his special St Patrick's day green helmet will be guest staring. And he'll be bringing Furman back with him. 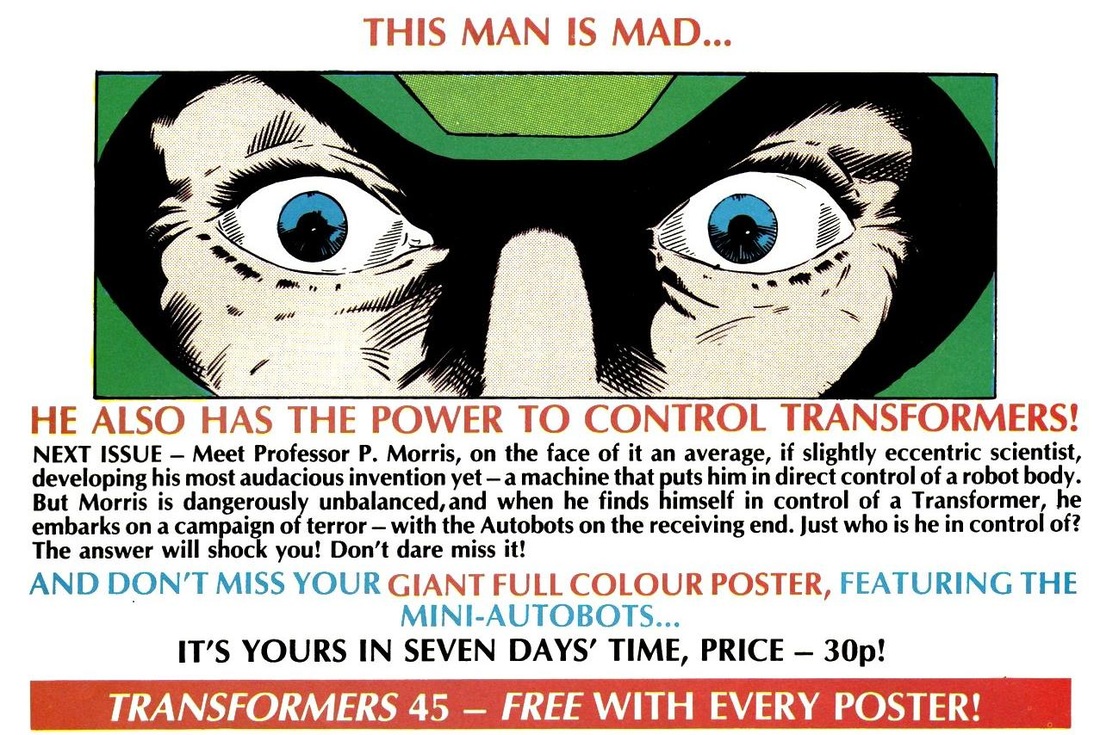 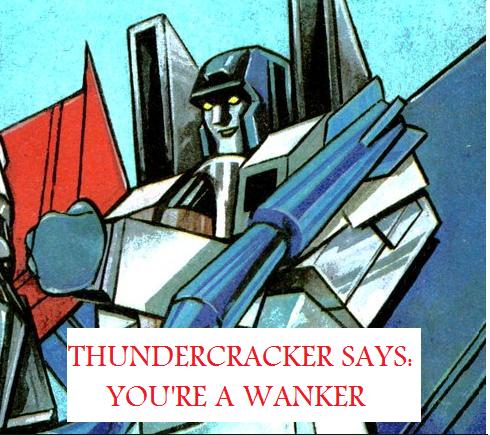