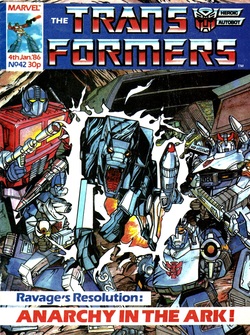 
Prowl- Do you realise what you are suggesting?


As a bit of follow up from the last couple of features, all round excellent chap Tim Roll-Pickering has pointed out Woolworth's also existed as a shop name in America. He's also come up with some interesting information about the somewhat eccentric naming policy Marvel used for their Annuals, which I'll cover in more depth as I get into that difficult area come 1988, though those interested will find the info in the comments section for the 1985 book (why not check out his excellent WEBSITE devoted to the Marvel Essential books as well?).

Now, back to business...

They say never judge a book by its cover, and that is never more true than in the issue that launches the brand new year of the comic. Behind the perfectly serviceable Will Simpson cover (complete with rather fun tag-line) we get the arrival of the Don. The Dude. The Guru's Guru. The signature artist of the Marvel run, ladies and gentleman put your hands together for Mr. Geoff Senior!

Senior is free in admitting he never had a huge amount of interest in drawing the robots and never regarding it as more than a job (which of course applies to much of the creative team on the comic as well). He's also someone who has pretty much fallen out of love with comic work in general now, actually preferring working in advertising (more soul destroying but lets you sleep on a big pile of cash at night surrounded by many beautiful women).

This is a crying shame as even at this very early stage where he's just tipping his toe in the water there's a real dynamism and energy to his work that even the best art in the comic to date (and much of what will follow) hasn't been able to capture.

The clean strong lines of his art are also a perfect fit for the now pretty much finalised character designs as well. Effectively we were lucky to get someone who should have gone on to Dave Gibbons or Brian Hytch levels of success when he was still interested. 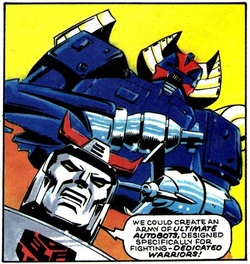 Makes RID Prowl look a pussy.
This first issue isn't even the best we'll see from him but it already feels like a total reinvention of the style of the book.

The first thing you'll spot on the first panel of his first page (which will show up in an unexpected place later in the year) is that, for the first time, the Ark is drawn as it looks in the cartoon. And there is very good reason for this.

Following both his previous efforts to cross promote with the cartoon (resulting in Decepticon Damn-Busters!) and a successful TV advertising campaign for the book during 1985 editor Ian Rimmer gave Mike Collins and James Hill- still writing collectively despite the credits- a bunch of tapes of episodes and told them to come up with a story for which clips could be used in a commercial.

This plan would come a cropper of advertising regulations, but the story remains, and is once again influenced by More Than Meets the Eye. In particular Ravage infiltrating the Ark, getting captured by Hound and Mirage before escaping across the wide desolate desert that has now sprung up in Oregon.

So far, so familiar, but what the writers add round this borrowed plot is much more interesting. As mentioned when the disappearance of the Dinobots as addressed, the luxury of a weekly format will frequently allow the UK to deal with loose threads that the American comic with its monthly need to focus first and foremost on the latest toys will frequently have to skirt over.

During the the course of this three parter the Collins/Hill gestalt will properly follow through on the effect of the last year on Optimus Prime, and in doing so see in the birth of his standard Marvel depiction. Ironically without Furman, the greatest architect of how we now perceive the character as being different from his cartoon portrayal.

Yes, this is where the self-doubting Prime comes into effect. Done badly, as he is in the current Regeneration One comic, this can make him an annoyingly whinny character with no sense of perspective. Subsequent authors who have explored this avenue (including, sadly, Furman himself) have tended to miss what made it work when the idea was done properly.

The entire general cause of comic Prime being more conflicted than cartoon Prime is that the awakening of the Transformer war on Earth is entirely his fault. He had the opportunity to end the war decisively with the Ark crash and miscalculated. The new war; every bit of destruction wrecked on the humans, all the death chaos and destruction Megatron and his fellows will cause is his fault. That is not only a burden cartoon Prime never had as the ship crash was just a freak accident, it's a hell of a weight to carry by any standards. He was prepared to die if it meant ending the evil, but all he did was delay it.

Now, compare that rich in storytelling potential to the cause of his malady in Reg before he finds out what's happened to Earth. Which is, whilst living on a seemingly peaceful Cybertron, being really down that he's not dead. What a pillock.

Though that main cause of his inner turmoil won't be directly addressed by the comic for a while, this introduces that conflicted side of his character by exploring a more recent failure. At the end of issue 8 the Autobots snatched defeat from certain victory, followed by Prime being used to birth evil before being turned on his own troops.

To expedite the doubts brought on by this, his own troops now seem to be questioning their leader in a way they never did before. How much of this is psychosomatic is hard to say as we've actually had very little of Prime interacting with his troops, we've tended to see him just giving orders and them obeying (or in The Enemy Within just ignoring any points they try to raise), but the worm of doubt is well and truly... well worming its way into Optimus.

There's one particular Autobot to blame for all this, but we'll talk about Prowl specifically next week when only real glimpse during the Marvel years of the bastard he tends to be written as now.

The cause of this dissent in the ranks is another bit of nice housekeeping. With the previous arc having established the Autobots have the only means of making robot babies at their disposal, the obvious question is how is it they're not winning this war? 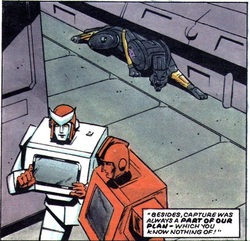 Sneaky cat is sneaky.
The exploration of this idea is going to be somewhat buggered by the very nature of Transformers as a toy based franchise as we'll go into in two weeks (look at me, all confident in my faith to follow these things through), but for now lets just say Prowl's imagined army of Ultimate Autobots and Prime's corresponding nightmare of them accidentally laying waste to Earth through their raw power lets Senior have some great fun.

It's also fun that their shared mental image of the worst possible Autobot is basically a giant grumpy Sunstreaker.

As a nice bit of symmetry the Decepticon side of the issue is also about the leader asserting his authority. In this case Soundwave, as the sensible intermediary boss for the first of many times, puts down Starscream's bitching with one of the series greatest insults. "You're just a missile with a mouth". This rather neatly sets up he and Prime as opposites without them having to directly interact.

If there is a flaw, it's the storytelling is a bit confused over whether Ravage actually wants to get captured once he's heard the Autobots secrets or not. SPOILER: He does, but his thought bubbles as he's being chased seem utterly genuine in suggesting he's really fleeing for his life. It's almost as if the whole sequence has been poorly incorporated from a cartoon episode where he had completely different motivation. Odd that.

However, that one flaw aside, as the issue ends with Ravage escaping his cage and smugly running into the night with Soundwave's exact plan still a mystery, we're left with a very strong first part that in both art and plot really feels unlike anything we've seen thus far.

The rest of the issue gives us an annoyed Soundwave reclaiming the letters page, a rough guide to what Marvel are up to in 1986 (amazingly it seems his UK book has only just caught up with the début of Spider-Man's black costume as seen over a year ago when he teamed up with Gears) and Inter-Face fills a page for the first time (something Matt and the Cat also gets once more. Sigh).

Something I'd have not believed back when all this started is the departure of that great constant of the back up strips as Machine Man flies off into the sunset of 2020.

Whilst some of what happens is predictable (MM is stopped from killing Bain by Jocasta's pleas) there's some surprisingly dark stuff here. Including the former arsehole Senator, who lest we forget was pretty much a camp comedy villain, shooting himself because he thinks what Machine Man will do to him would be worse. It's a strong final to a strong mini-series and it's easy to see it's the only back up to return for a victory lap towards the end of the book's life.

Next week, Bumblebee screws up, Prowl sticks the knife in and we get a new back up in the shape of Iron Man. 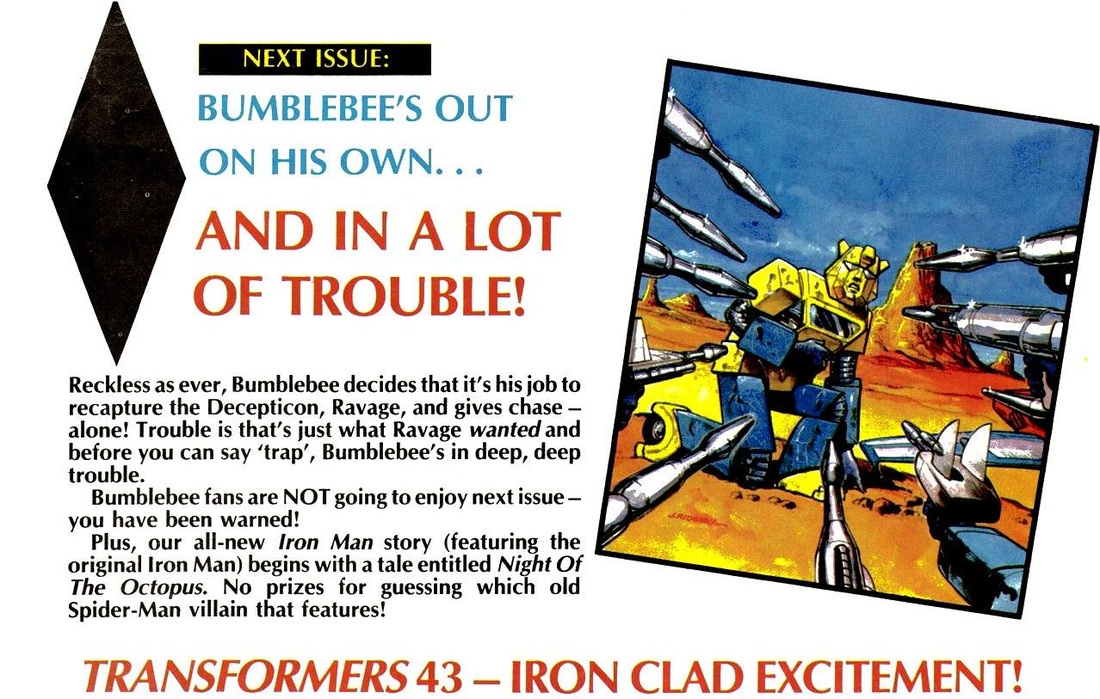