Hit Me Baby One More Time. 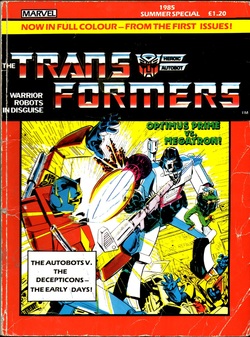 
The idea of special reprint editions of ongoing comics to (roughly) coincide with school holidays is, much like the hardback format annual, singularly British, and basically boils down to money for old rope.

On the other side of the coin, kids get to catch up on stories they may have missed and parents get something more substantial than usual to give the little sprogs in order to shut them up that bit longer during the very long days they're not at school.

These first two Transformers books are fairly unique compared to what will come latter. The most obvious being when you touch them, the covers are proper card and they even have an actual spine. This more prestigious format would be denied the later reprints, only being used again for the original content (to the UK) Movie special.

The other is that these are the only specials to reprint American stories. Why is fairly obvious, it keeps the origin story for the characters in circulation for younger readers.

It's also fairly obvious why no subsequent American stories were picked for reprinting despite the second issue ending with the cliffhanger originally seen in issue 8: UK reprints sees payments to the UK based creative team. It's hardly surprising said team would prioritise their own work for the Special treatment.

Despite the generally cool attitude towards American reprints in future, the first special has an introductory text that is very excited at the prospect of representing something from the dim and distant past of 1984. The second only has a new recap, but does close out with a puzzle page inviting the reader to make as many words as they can out of Optimus Prime. This is the only time one of the Specials would feature such a thing, and I suspect it's something created for the Annual before there turned out not to be room for it in its intended home. 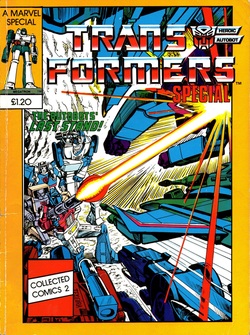 It is nice to see these stories in full colour, though unfortunately that means more painful Yomtov to struggle through. However, other than that the only other thing to note is that both my copies have been used by their original owners as writing paper. On the second this just boils down to the rather sweet notion of the original UK cliffhanger being noted, but on the first pretty much every inch of white has been coloured in with a pen. Damn kids.

Otherwise these sit in a strange place. At the time they were hugely important in keeping the many new readers who had joined the book during 1985 up to speed on what they'd missed and the card covers make for a very nice package.

However, time has not been kind to them. Not just because of trade reprints of the American series superseding them, but because this isn't even the best reprint of the British version of these issues. If you desperately need colour to be spelt properly you'd be better of getting the Complete Works volumes, that not only present the same material in a proper hardback book but even has its own unique ending for the original mini-series that mean they're of much more interest in their own right.

However, despite now being somewhat redundant, these two issues do kick off a series that would outlast the comic it's spun-off from and which provided later-day readers like me our first exposure to the "Classic" stories we hadn't been around for first time. These days only a completest is going to be interested in them, but the importance of their supporting role can't be understated.


After this spurt of activity to close out 1985, we now return to our weekly schedule in order to sing in the brand new year of 1986.

I'm also somewhat painfully aware the main Transformation page is getting somewhat crowded, so hopefully in the next few weeks you'll see a redesign that will move each years entries into its own page. 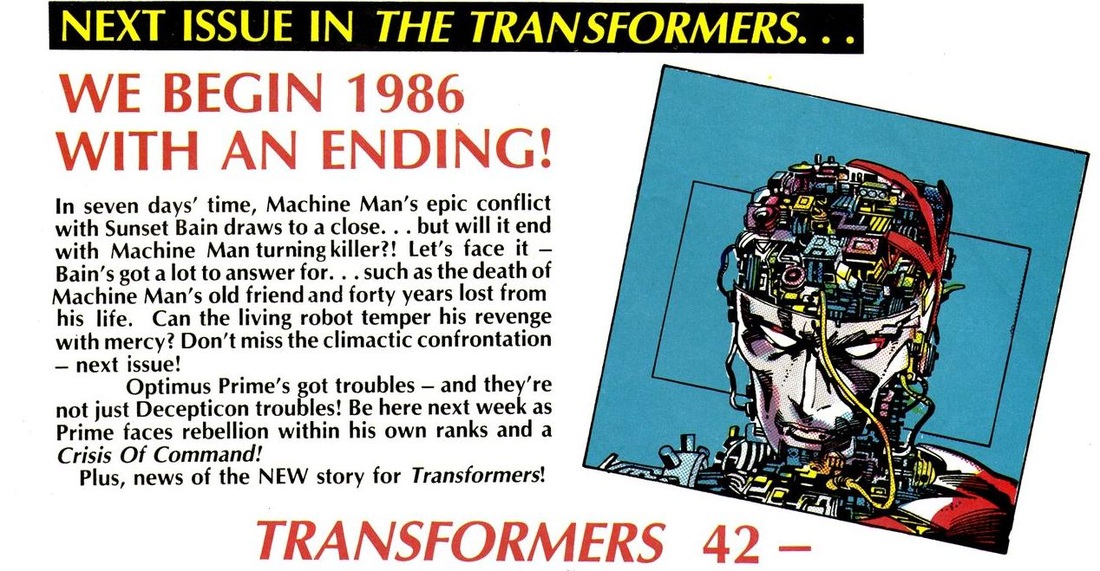