Another Dirty Money Heaven Sent Honey Turning on a Dime. 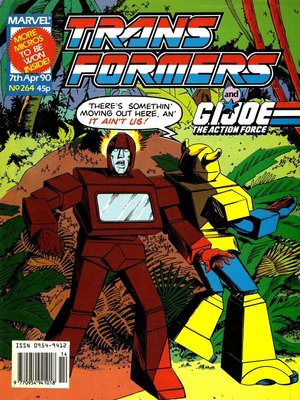 
And then, I’m afraid I shall have to kill you.


Jeff Anderson hasn’t been on interior art for a while, so it’s nice to see him back with a cover where Ironhide ignores the giant looming shadow to his right because he’s just spotted the reader. Clearly the shock of finding out he’s in a comic has thrown the poor guy into a state of existential dread, I don’t think we’ve ever seen him look so terrified.

Meanwhile, Bumblebee is looking with mild distrust behind him at the G.I. Joe: The Action Force logo, as if he knows something truly ominous is about to happen that’s associated with that franchise.

All of which is topped off by a quote from Aliens. Not the last time we'll be encountering that film this year. 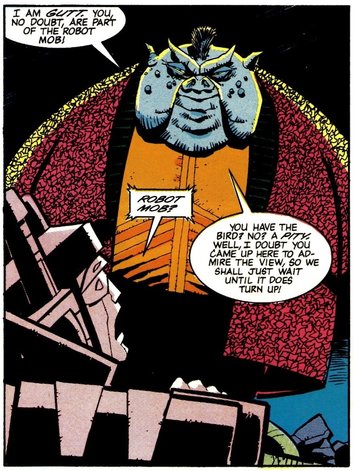 There's a TFN cosplay I'd like to see.
Ominous things are also afoot in the concluding part of Bird of Prey!, as Nightbeat thinks he’s escaped B’Hgdad only to run face first into a mook’s gun...but with a mysterious Someone saving his life by shooting said mook in the back.

Meanwhile, in a lesser spotted Furmanism, we get our second story in a month where two Autobots climb a mountain only to be met by a power hungry villain and his henchmen at the top. Oddly that one hasn’t been revisited as often as “It never ends!”

Gutt, in full Greenstreet mode (if you haven’t actually seen The Maltese Falcon, just think of Baron Greenback), urbane and cheerful as he refuses to believe anyone wouldn’t be after the bird for its power and what a shame it is he’ll have to kill them all when it turns up.

Nightbeat shows that Siren and Hosehead are slackers by driving up to the top of the mountain and arriving only minutes after they did. And for once he actually gets to be a proper detective! When using it as a club, part of the Bird’s covering was knocked lose. Just like in The Maltese Falcon. But there’s a twist: In the film this reveals the falcon was worthless. Here it instead exposes its true glowing value, it is the Matrix like source of purity that was stolen from the shrine.

Meaning, after Hosehead and Siren have shot the henchmen (with an amusing and clearly editorially mandated line about the guns being on stun), our heroes are faced with a choice. Keep the Bird and use it as a Matrix replacement—whilst Miss Fatale occasionally borrows it to stay young forever—or give it back to the world. 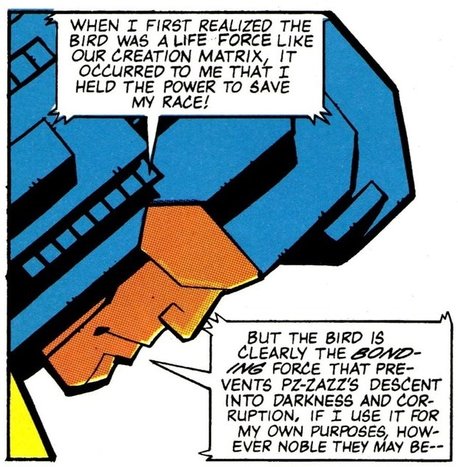 Nightbeat: You killed my partner... Siren: I'm right here! *BANG* Nightbeat: You killed my partner...
The choice they make is an obvious one of course. But it leads to the centrepiece of the story, the equivalent of Bogart’s big speech about why he has to do the right thing (watch HERE). It does have less impact here, mainly because Miss Fatale hasn’t been as morally ambiguous a character as her film counterpart and you don’t really get the sense Nightbeat is really all that tempted as he’s always been a far more straight up character than Sam Spade.

But it’s still a good speech that has some passion to it and ends on a nice euphoric note as the Bird is replaced in its slot and floods first the mountain and them the planet with cleansing light. Which Gutt runs away from as if it burns, so presumably those spared henchmen are fried by it.

But, as the narrator notes, happy endings are not usually an Autobots lot. And in a story that has had a few familiar moments recycled from the UK, it ends on a reuse of the shock cliffhanger to the second part of Dinobot Hunt! way back in issue 48. The Autobots are shot in the back by the mysterious “Robot Mob”, who not only have the ability to both climb a mountain silently and drastically increase the size of its previously narrow peak, but are also the Decepticons! Led by Thunderwing. You’d never have guessed.

Despite not really having the length to do the homage full justice, this has been tremendous fun with a pace and wit to it that means the few rough edges get quickly skipped over. And Geoff Senior is a genius. All in all, a strong start to Matrix Quest, I can’t wait for the second part next week. Though oddly the NEXT box is decidedly vague with on a “To be continued!” rather than the usual title drop. 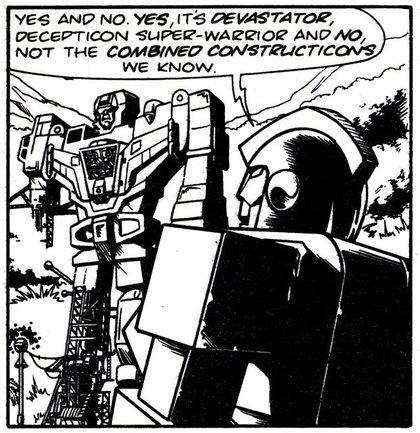 Oh well, that makes sense.
With stories having been moved around (presumably either to tie in closer to the re-release of the Constructicons or because Wildman needed a bit longer to finish next week’s story than expected), Desert Island Risks! becomes our first proper Earthforce story, though it continues the lose overarching storyline by having Ironhide and Bumblebee look for the missing Prowl by tracking down a mysterious Transformers life-sign on a desert island.

Said life-sign is Devastator! Though not the proper Devastator, the Constructicons are no longer able to combine (for reasons that will never be established in-fiction, but if you want to think nucleon according to your own Earthforce placing, go nuts) so the Decepticons are building their own.

Hmm, would this half finished construct that can’t have been given Matrix energy show up as a life form?

For years the general assumption—including from me—was this was a bizarre tie-in to the Constructicons being reissued without the parts to combine them into Devastator. But (and thanks to Twitter’s Chrs00 for asking the right question when I mentioned this that led me to double checking) it turns out this is what tfwiki calls a “Popular myth”, said toys not coming out for another two years. I wonder what the unpopular Transformers related myths are?

So even though this is a little early for a UK toy tie-in (the summer is the earliest we’ll be likely to see them, possibly even Christmas) this seems to be a nod at Action Master Devastator, which makes some sense with the namecheck for Hydrus 4 later in the story. Why though, when the caption two weeks ago suggested Furman was going to leave the Masters to the American stories and it’s odd he’d give a non-nucleon origin to just this one toy and that we’re more than a year away from seeing another Action Master in the comic...is another mystery. 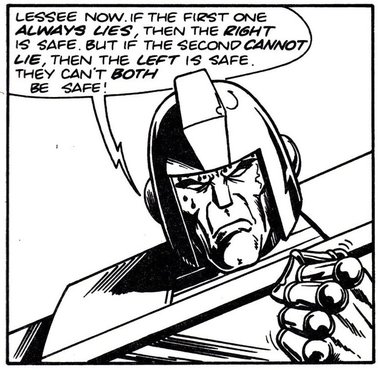 And that's Numberwang.
It’s entirely possibly that this is just an amazing coincidence, the whole story feels as if Furman is making up something quickly as he goes along and certainly the only reason for the story to be set on an island is because he thought of the title first.

Earthforce is often accused of being irrelevant froth full of bad jokes, and in any court case this story would be exhibit A. The new half-built Devastator isn’t protected by Decepticons, but by an automated pub quiz machine that is heavily influenced by the final part of Doctor Who and the Pyramids of Mars, even down to using the “Everything I say is a lie and the person next to me is lying” riddle.

The one bit of fun that might be had from this would be to be able to play along at home. Which you can do with the lying questions, but not with the one asking you to name an animal from Hydrus 4. The short page count means that this Adventure Game stops before it starts as Ironhide decides he’s had enough of playing silly buggers and so just crashes into Devastator’s scaffolding to bring him crashing down.

This is one of the weakest stories we’ve had for quite some time, and not a great indication of the new direction. Especially as it’s soon going to have to carry the entire book. A reasonable debut from Pete Knifton and Pete Venters (though it’s another strip that looks like it’s waiting to go to the colourist) on art is the only real thing of note. 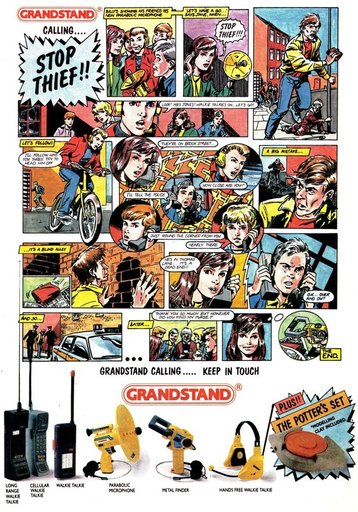 Inform on friends and family! Fabulous prizes to be won!
Despite previous promises that Matrix Quest would run for four months, Transformation doesn’t mention any changes of plan, though it does coin “Combat Clod” as a new nickname for the bobble hatted hero.

If you want to set up your own Famous Five, there’s a full page advert for Grandstand’s spy equipment, including microphone, walkie talkies and a...err...potter’s wheel. The kids in the comic use it for catching a thief, I suspect anyone who did pick the kit up used it for less noble reasons.

Combat Colin Vs. The Deadly Duo sees some topical humour as the Ministry of Daft Ideas as Colin to investigate why their tunnel between Britain and the Isle of Wight keeps getting pulled off course. It turns out the Soylent Tunnel is being attacked by two mysterious shadowy villains (one of whom is blatantly Madprof. I hope this is a nod to some of the unconvincing attempts to hide villains we’ve had in the lead strip lately) with a submarine and a magnet. Causing the tunnel to flood with Colin and Steve in it...

Not the most reassuring read a week before I take my first trip on the Eurostar, but this poking of fun at the many delays before it opened is still very funny.

Dreadwind gets a letter from Trevor Leckie of Downpatrick asking about a lot of old characters and stories (will Centurion be back? “Anythin’ can happen these days!”), which gives the Decepticon the excuse he needs to mention that Death’s Head’s own comic may have died, but an original graphic novel will be along soon. He also tells Galvatron of London E1 that Andy Wildman will soon be drawing the American series.

Most telling though is the Dreadwind Fails to Answer Questions Properly! response to C. Smith of Kings Langley’s question about whether Vroom or Crossblades will be in the comic. “I wish you Humes would stop asking who’s gonna appear in the comic—I don’t know what’s going on in the over-fertile mind of Simon Furman—whoever he is!”

For the record, if Wildman has started drawing the American book, the Crossblades has already been put in an issue by Furman.

The Monstrous Micromasters Competition Mark II reruns the contest from issues 232-235 after reader complaints about it being too hard. This time all the questions are about events happening this week, such as naming the Decepticon Ironhide knocks over. Much simpler for this addled brain.

G.I. Joe: The Action Force has a sequence of blatant padding that has nothing to do with the rest of the story as Snake Eyes, Scarlette and the Blind Master arrive in Marseilles on their way to rescue Stalker and have to deal with some thieves. With grenades. Amazingly though, there’s no blatant racism against the French.

In retrospect the Next Week page is one of the most ominous in the entire series, as the image for the second story shows Bumblebee standing next to some G.I. Joe: The Action Force guys. Contemporary readers would have just assumed this was just the next part of Matrix Quest, but instead we’re about to hit the roughest patch of the entire book.

Next week’s entry will be up on Thursday as I’m going to France for the weekend to take advantage of freedom of movement before Brexit fucks it up for all of us. Hopefully there will be no madmen with magnets. Or grenades for that matter. 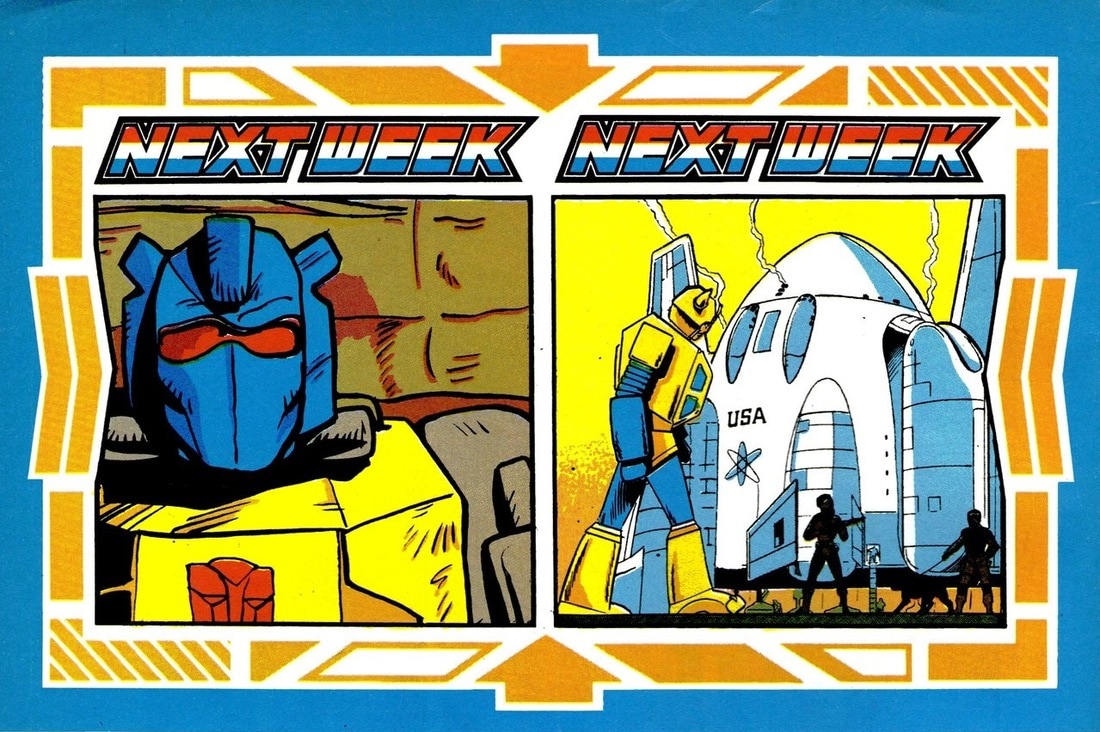