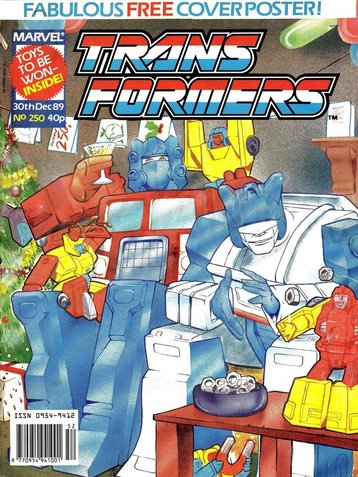 
Come Jazz...learn that two heads are not necessarily better than one!


As we hurtle closer and closer to the end of this project, we’re inevitably going to hit more and more final moments. Though there will be an attempt at a Christmas themed issues at the end of 1990, 250 is the final one to have original seasonal content. It is also the final Big Issue to have original comic content as well, so it’s a two for one deal.

It’s also worth remembering we’ve had five straight Christmases over four years with special issues. They really did become a Tradition with a capital T to many readers, so this is genuinely the end of a very significant era.

Pleasingly, the combination of holiday and getting a quarter of a way to a 1000 issues means we get the best cover in a good long while as well as Andy Wildman gives us a double spread of various Autobots and Decepticons getting merrily pissed with one another. The attention to detail extends to Dreadwind and Grimlock sitting next to one another, even if sadly this doesn’t extend to having Soundwave there (but then, it’s all toys going no further back than 1988, no good will to discontinued characters). I also love Bumblebee playing with himself. 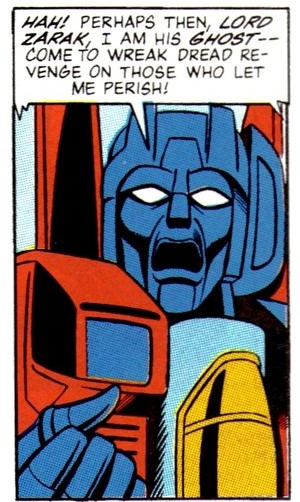 A ghost with only one ear?
Of course, a big shift from last year is that the lead strip can’t be Christmas themed due to its reprint nature (though whether intentional or the result of needing to make room for the competition and to get Combat Colin on a colour page, the dropping of G.I. Joe: The Action Force does stop there being more non-Christmas stuff than actual Christmas stuff), and no one is in the mood to pull a cracker in the second part of Skin Deep.

Though Scorponok’s out and out fear of Starscream thanks to what he saw during The Underbase Saga is well done—he hesitates to help Prime and hangs back whilst sending his own troops against his resurrected foe—the opening Earth scene is somewhat awkward. Mainly because it starts with more exposition explaining the back-story to this side of the plot, most of it (such as the Air Strike Patrol) not really being necessary.

Starscream does provide some interest however, wisely despite Megatron’s claims his mind was a blank and Ratchet’s surprise not yet having kicked in he’s full of typical Starscream sarcasm. This includes telling Optimus what an honour it is to be the first to be killed by his Pretender shell and suggesting to Zarak he might be a ghost. Which I suspect has to be an intentional nod at the cartoon.

It’s on the Ark things are much more interesting though, as Kup, Blurr and Getaway deal with a terrified Blackjack and the explosives. It’s worth remembering that Budiansky almost totally ignored Hot Rod and his two film pals due to not having created them. The fact Furman almost immediately gives them solid sized supporting roles (and over more recent toys) is probably one of the first real signs to kids that don’t pay attention to credits that something has changed. It’s also the first real sign the film is going to be as massive an influence on Furman’s US work as it was on his British. 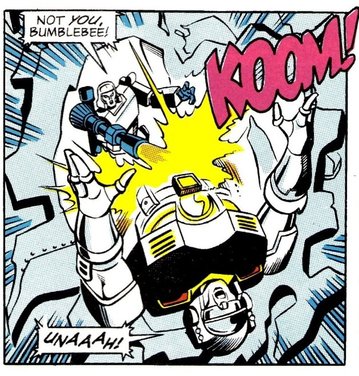 Even Bumblebee is not safe from Pretender Disdain.
Kup gets to be quite the hero here, refusing to evacuate the Ark whilst there’s no time to evacuate the deactivated troops aboard (an actual nice link to the other story in the issue!) and declaring that it they don’t stop the bomb they all go BOOM. All whilst Blurr is having a massive fast talking panic attack in the background.

Though it’s odd that not even a token explanation of why they can’t just put the bomb on one of the shuttles and send it off into space.

On Cybertron the tension is also rising as Megatron easily takes care of all three Pretenders (hilariously bashing Jazz unconscious against his own Pretender head), which seems oddly easy considering the power these guys are supposed to have. But Furman has to keep the new guys safe, so Megatron goes to the effort of throwing them through a hole in the wall of his base onto the surface of the planet. Before sending all his troops outside to finish them off.

With only expendable 1984 characters left indoors, the issue ends with Ratchet phoning up the Ark with an idea as Megatron comes to get him...

Despite a clunky opening, there’s a lot to like here with a nice balance of black comedy and a real sense of danger, it’s really starting to feel like Ratchet is in a corner he might not get out of in one piece. Delbo also does some solid work on art. Though the UK editorial team let the side down as I don’t think they’ve managed to correct a single “See Issue” box in this entire arc. 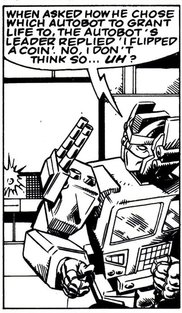 Prime's down with Earth expressions anyway.
The Christmas story has traditionally been an introspective one focused on a character musing on their past and making a decision to move forward with new purpose. And the final one, The Greatest Gift of All!, continues this trend and even has Optimus as it’s featured lead as was the case last year.

Longtooth’s gift of Matrix energy has arrived (though interestingly there’s no direct reference to last week, Longtooth is being repressed) and Prime is now faced with the choice of deciding which of his fallen troops he should revive. In creepy yet not entirely ruining for once foreshadowing of next week he starts by thinking of First Aid as he needs someone with medical training. But it quickly becomes a tormented run through the many worthy people under in the stasis booths and the things they might contribute. He even wonders if he should use the “Ip dip bird’s shit” method and select Seaspray—who something has happened to since Underbase—at random.

It’s when he gets to Silverbolt that Prime’s angst starts to feel a little silly, as he begins bemoaning that Silverbolt will probably come to resent the gift of life given to him. Which is daft as he’d probably resent being dead more. Even the ever tormented Grimlock will, in future stories, only come to resent his fellow Dinobots aren’t also up and about rather than regretting his own return. 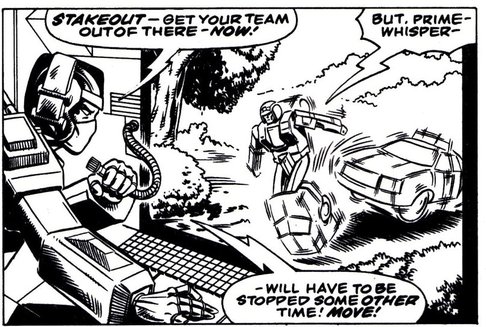 "I've just remembered, you have our only doctor!"
Luckily there’s a handy distraction as a call comes in from the Rescue Patrol (obviously with the aforementioned shortage of doctors, it makes perfect sense for Fixit to be sent into battle), who are attempting to take down Whisper as he’s been hired as an Autobot assassin at large by Decepticon High Command. Things are going wrong though as the rest of the Air Strike Patrol turn up. As the forest fight intensifies and the Ark’s computer (still Auntie I wonder?) gives him the low-down on the environmental damage being caused, he has his epiphany.

Remembering the harm they cause to Earth is his fault, he recalls the Micromasters and decides to give the gift of Matrix energy to the planet, infusing the Earth with restorative power.

It’s a nice sentimental ending and it does tie in well to the rising wave of environmentalism that will peak in the early 90’s with Captain Planet. But it also hits almost exactly the same beats as last year’s story and frankly Prime being so anguished by having the chance to do something nice almost feels like a parody of Furman’s take on the character. And yeah, fuck you Seaspray.

Staz continues to impress on art, though as ever his Powermaster Prime has an odd sense of proportions. He does however have fun with the brief battle and adds a nice sense of wonder to the revived planetary scene. 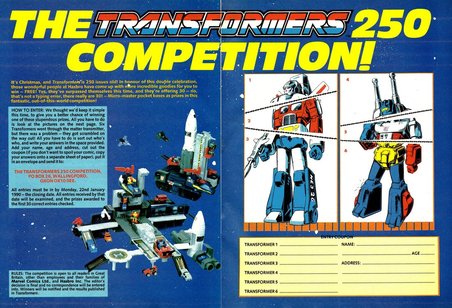 Mirage's biggest role in years.
Transformation is surprisingly low key, though the sidebar attempts to generate some interest for the future by mentioning forthcoming new cover artist Gary Erskine and promising there will soon be some exciting new about the future of the book. I can’t for the life of me remember what this will be though as I don’t think there’s any significant format changes (and the implication is it’s the comic itself that’s changing rather than the shift in story focus that is going to be Earthforce) in the immediate future, so it’ll be interesting to see what this is.

As a celebration of the birthday, there’s an exciting Micromaster base competition with 30 prizes. The promise is it will be easier than more recent ones (have they had complaints?), and it’s basically a repeat of previous “Name the characters meshed together from their Universe” profiles efforts. Though I’m not sure how easy it would actually be when characters like Jetfire and Mirage haven’t appeared for a long time.

We’re promised a “Nice” Dreadwind for Christmas, which basically boils down to his saying “Merry Christmas” a few times and having Santa hats on the page’s Decepticon logos. Amusingly we get an example of Dreadwind Answering Questions Properly! that still manages to contradict the Longtooth flashback last week as he gives Christopher Hancock of Co. Durham a lengthy and entirely accurate history of the creation of Pretenders. Oh well.

He also follows up on a mention of it from Paul Maguire of Co. Fermanagh by offering to start up the Comics Exchange again (Stock Exchange has never left), giving those kids nowhere near London a chance to get old issues. 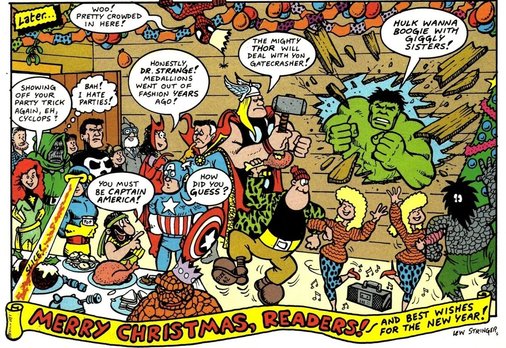 I love Lew Stringer.
AtoZ covers Rewind and Rumble (Rewind gets a lot of headaches does he? Poor Chromedome) and there’s a full page advert for The Incredible Hulk Presents that’s notable—along with the mention of issue 13 in the Mighty Marvel Checklist--is notable for the fact the comic has unexpectedly been cancelled and there won’t be an issue out this week.

I’ve saved the best for last though, the full colour Combat Colin sees our heroes on their way to the Transformers office party, only finding the robots have put a “No humans invited (in other words: Clear off you two!)” sign on the door. I wonder if this pre-dates the “No Homers” gag from The Simpson’s?

Deciding the Cybertronians can get screwed (with some actual @** style swearing from a Steve who knows their the book’s main asset), they decide to throw their own Christmas party in the Combat Shed. And all the Marvel heroes turn up. Captain America is shocked Steve can work out who he is from his costume; Cyclopse carves up the pudding; Dr Strange has his fashion sense mocked by Scarlet Witch; Dr Doom hates parties and Hulk smashes in because he wants to boogie with the Giggly Sisters. There’s also some of the villains Colin recently teamed up with (Mountain Man gets that boogie first!), a Dalek and three people I’m presuming are based on people Stringer knows. It’s glorious and worth the price of the whole comic.

Next up as we wrap up 1989, the last Annual with original comic content! And thanks to Tim Roll-Pickering for pointing me at a website with the Marvel Annuals ad that they didn’t bother to run in this book for whatever reason. See it in last week’s comments. 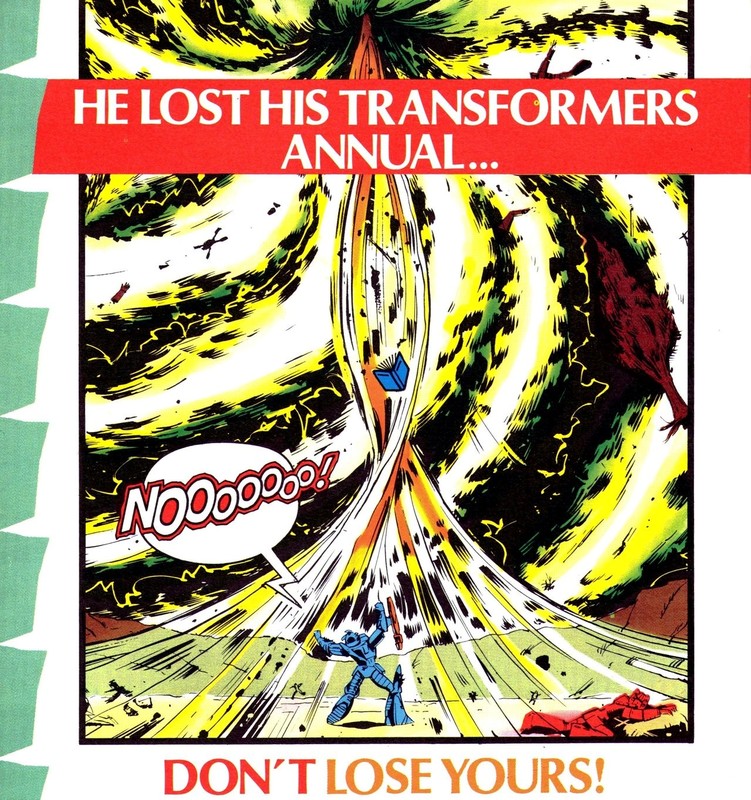