So Need your Love, So Fuck You All. 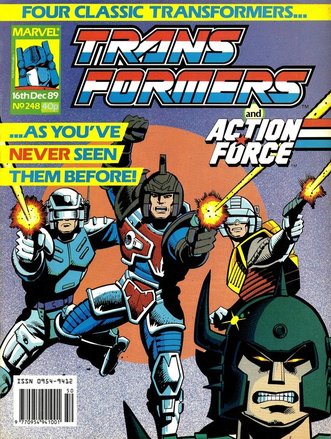 
If the Decepticons think I’m a feeble minded fool, a joke, then what on Earth do the Autobots..think...of...me?!


It’s an interesting cover this week, not because of the art itself (it’s perfectly serviceable because Geoff Senior can’t do much wrong, but Pretender shells are hard to make exciting), but because of the attempt to generate reader interest from the fact four classic characters are returning in a whole new look rather than the fact said characters are coming back. Indeed, there’s not even an indication of who these Pretenders might be (though obviously attentive readers will know), which makes you wonder how many casual sales were lost from people who would have gone “Hey, Bumblebee, he was cool...”.

It’s also pretty much the only attempt to try and make the Pretender aspect of the Classic Pretenders interesting. We’ve already seen a British story completely ignore the shells, and they will only be used half-heartedly from here as our three Classic Autobots will jump out of them at every opportunity (indeed, the cliffhanger this week is them abandoning the supposedly protective shells as they run into battle) before Furman takes great glee in destroying them. Starscream’s won’t even last that long. This will become the first real sign that Hasbro’s attitude to toy promotion is going to become fairly relaxed in the dying days, in a way that would probably have Budiansky weeping with envy. 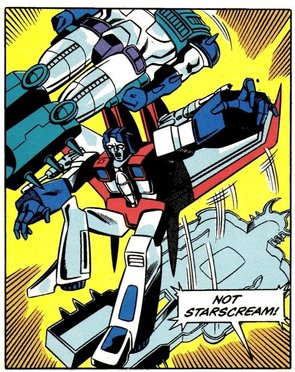 Gasp! Looks like Starscream will be a big threat for a long time to come.
The conclusion to All the Familiar Faces! continues the trend of plot developments actually happening rather than stagnating. So we open on the Ark with a panicking Blackjack realising the Autobot shuttle is about to return and as he desperately searches for weapons he winds up running into Kup (incidentally, neither he or Hot Rod are using their Targetmaster guns, have the Nebulons had accidents?) and accidentally activating the explosives in fright.

It’s quite a funny sequence, but it does rather undermine Megatron’s threat that the only staff he can get are such idiots. And for a storyline that, from a UK perspective, will run one week longer than Target: 2006 the villain needs to be more of a legitimate terror.

On Earth, events continue to be slightly out of sync with those on Cybertron, as it takes Starscream some time to materialise on the planet. Which is nice as it gives Zarak the chance to make his choice, remembering the events of “Issue 50” (another failure on the UK editorial team’s part) he decides it would be for the best to trust Prime and pool their resources.

It becomes slightly annoying that, the comic having taken quite some time to come to this decision, they never get the chance to do this as Starscream finally beams in. And of course instantly emerges from his Pretender shell despite that being his secret weapon because FUCK PRETENDERS. However, everyone’s “Oh hell” reaction more than makes up for this, it’s easy to think of Starscream as his comedy coward TV persona and to forget that in-fiction the mere sight of him would be bowl loosening after the Underbase incident. Especially as no one present can be sure he’s not still super-powered. 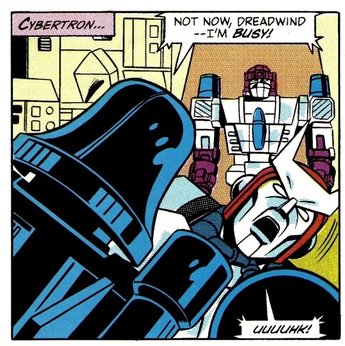 typical day in the office.
On Cybertron we get the highlight of the issue as Megatron casually goes “Not now Dreadwind, I’m busy!” as the Powermaster interrupts his throttling of Ratchet as if he’s just interrupted the boss during a staff meeting. The reason for ending Megatron’s fun is fairly urgent though: The three test shells are active...but who could be in them?

Yes, three classic heroes are reborn as Jazz, Grimlock and Bumblebee abandon their super-shells to attack Megatron whilst Ratchet gloats “It’s payback time!”. It’s a shame the impact of their resurrection has been rather undone by us seeing them in the UK story just last week and the villain being in danger is perhaps a strange cliffhanger, but overall this continues to improve and finally has some pace to it. Megatron’s comedy sidekicks are good fun as well despite the aforementioned lessening of his threat.

On art, Delbo continues to do solid work, with the actual reveal of the three revived Autobots being an especially fine panel. 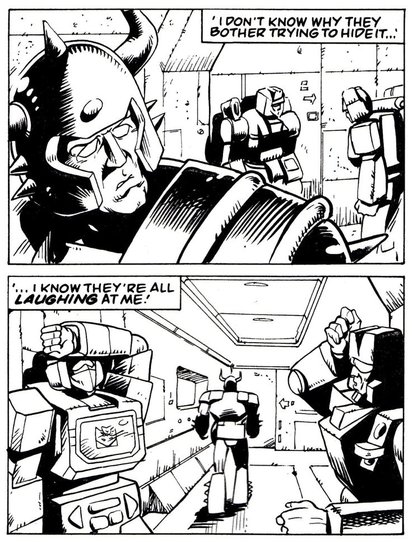 Well, that reign of terror lasted long...
The black and white story, Fallen Star!, is yet again out of sync with the lead. Though at this stage you have to wonder if it’s deliberate rather than the result of the reprints knocking everything out of whack. With just three weeks till the new year and a new more standalone direction for the UK stories, this is basically one of the last two chances to do a story like this, connecting to the main strip and/or promoting new toys. There may well have been an attitude of “Sod the continuity, we might as well just roll with it” at the office.

Either way, a mere six pages after seeing the reborn Starscream going on a reign of terror, we suddenly get him as a battered and depressed awkward addition to Scorponok’s troops in the aftermath of a story that won’t conclude till the new year.

It’s an odd juxtaposition, but the structure of the story more than makes up for it. Firstly, though we’ve had first person narration boxes before, the novel trick Furman uses here is to have Starscream talking directly to the reader, creating a greater sense of intimacy to the story as we get a strong look at what makes him tick.

The approach taken to Starscream’s character is also fairly post modern. He is effectively an entirely one-note character, constantly trying and failing to betray everyone with no sign he ever learns from his mistakes or that his constant failures have any impact on him. Furman here subverts that by actually looking at what it would be like to go from near-God back to toady as Starscream is just out and out depressed. Cutting neatly from an Underbase flashback to Starscream sitting miserably in a corridor, he bemoans both the loss of power and the way he had to crawl and beg for Scorponok not to kill him after the events of this issue. Even having a Pretender shell can’t help when “There’s a nothing inside!”.

Which brings us to the great sight gag of the issue: In order to show us the contempt with which everyone now views him, Starscream takes us on a tour of Scorponok’s base. Everywhere he goes he’s met with stares and awkward silences, making him think everyone is just laughing at him. But in fact we the readers get to see their true reaction, as soon as he’s out of sight they collapse in relief that he hadn’t done anything psychotic. The Decepticons aren’t laughing at Starscream, they’re terrified of him. 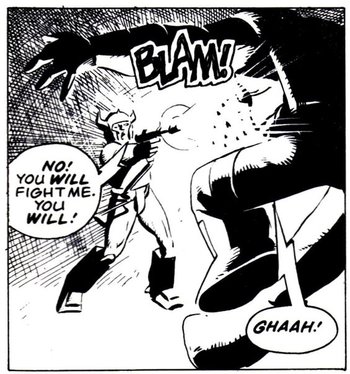 If you insist...
This isn’t just funny of course, it’s also a key piece of set up for the dissent in the Decepticon ranks over them being unhappy at Starscream just being let back in we’ll see next year. It also gives us the return of Soundwave, who gets to recover pretty easily from being Underbased without the need for Pretender shells or Nucleon because he’s Soundwave.

Running outside the base, the comedy takes a dark turn as Starscream seriously considers suicide. But he’s too much of a coward to do it. Again, this is the perfectly logical conclusion to his constant failures, and you have to wonder what would have happened if he hadn’t run slap bang into three Autobots. Cloudburst, Chainclaw and Getaway (the later in his first “Real” chance for Furman to twat him) are just as scared of Starscream as his colleagues, but he takes their hesitation as being the result of more laughter. So he unleashes a giant can of violence, easily taking out all three Transformers with extreme prejudice. Which turns out to be great therapy, making Starsceam realise: He’s back!

This is a great little story, and probably the best use of Starsceam in the series. It’s actually similar to how Dark of the Moon would later handle the depressed Megatron and makes him feel like an actual character rather than a walking trope. The innovative structure (which is also bookended by repeated narration about what Starscream used to be) helps to make it even more memorable and Andy Wildman completely nails the art. With this phase of the black and white era coming to an end, it’s good to see the “Continuity tie-in” strips start to bow out with some style.

Did they miss it, or just not care?
Though it doesn’t make the cover yet, this is the first issue where the Action Force strip is branded G.I. Joe: The Action Force, which might explain why half of Transformation is given over to bigging up the new story, plus the sidebar has both the results of a competition from Action Force Monthly and briefly explains what the new name for the backup actually means for those who missed the bonus comic.

This promotion is less than enthusiastic though, pointing out that The Lower Depths (from issue 21 of the Special Missions comic) is yet another adventure down a sewer. In this case the sewers of New York as G.I. Joe: The Action Force (including a guy called Spearhead with a wild cat, because why not?) investigate mysterious Cobra gas canisters that results in them being gassed harmlessly before finding Cobra have attacked a can to a wall in a mysterious way. It’s not the strongest start, even if the gag of Charbroil being excited about being in New York and consulting his tour guide whilst in the sewer is quite funny.

Dreadwind returns after a two week absence to give us a prime Dreadwind Fails to Answer Questions Properly!, as Faisel Syed from Greasby rightfully points out that the previous answer of “London” to the “Where can you get back issues from?” question is unhelpful to those living hundreds of miles away. To which Dreadwind just snootily says to look at the classified page. How helpful.

Also, James Kirk (currently posted at RAF Uxbridge) asks his second most important question of 1989 after “What does God need with a starship?” as he wants to know how Soundwave shrinks. It’s all in the reflexes apparently.

Combat Colin’s adventures in The Place come to a rather hurried end after Colin takes control of his trousers back with a whistle. As far as I can tell, there’s not a single Prisoner reference here, and despite there being a fun panel of the Brain using all the guns in the trousers pockets (including a Smelly Sock Bazooka) it’s easy to see why the Brickman reprint of this story would have a longer wrap-up added to it.

Next week, is the comic getting a bit long in the tooth? 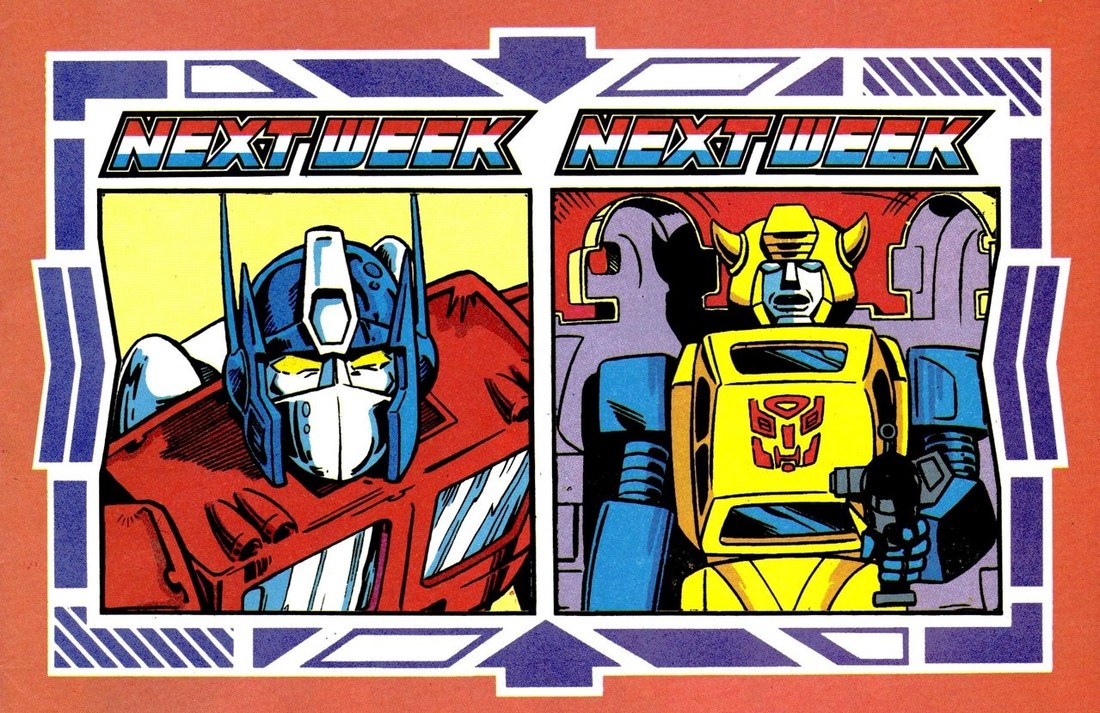