You're As Cold As Ice, Willing To Sacrifice. 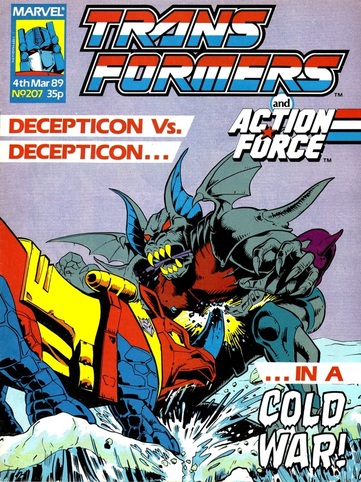 
“Can’t we discuss this?”
“What’s to discuss? How you are to meet your end?”
“Don’t tell me, let me guess—old age?”
“Sorry, that would throw off my schedule!”
“Any other way would throw off mine!”


In theory this is the point where this story should fall apart. With the pieces finally smoothly put into place by Starscream the stage is now set for a massive fight between the two groups of Decepticons, or in other words exactly the sort of big lots of robots action scene that is clearly of less interest to Budiansky than the character stuff and which Delbo often struggles to draw. We should be looking at a dull visual mess.

To a certain extent this is true. As Scorponok’s troops leave their ship to protect their commander and have to face off against the Predacons there’s lots of characters leaning backwards and pointing, and some of the battle sequence that follows is awkwardly posed.

But, surprisingly, Budiansky is clearly having a ball here in a way he wasn’t back in Totalled. This and the next story are well remembered for their odd mesh ups of characters fights, but whilst Dark Star will veer more towards the ludicrous here we get the sort of combat the American series has been sorely lacking. Astrotrain riding over various Decepticons! Skywarp teleporting around Bugly and being undone because he’s a predictable idiot! Apeface having his arm ripped off by Rampage...only to slap him with the bloody end of his own dismembered limb! It’s impossible to read this and not smile.

My personal favourite though is Ratbat being hoist by his own petard as Uncle Bob takes advantage of the fact he’s given one of these fancy new Pretender guys the same basic gimmick he used for the cassette: Sucking the fuel out of other Transformers. So whilst Bomb Burst is briefly happy snacking on the communications officer (if this comic was being made today, “SLURP You taste good Soundwave” would create a 1000 slash fics), what he really wants to do is chomp down on Ratbat; shooting him down and putting old Batty in the same position he must have inflicted on others over the years. As an added bonus, the panel of the Seacons smashing through the ice to save Ratbat is one of the best pieces of art in the whole issue. 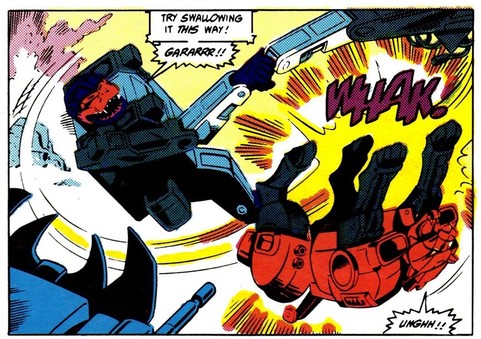 Yeah, I know it's the image everyone uses from this issue, but how could I not?
One especially nice thing about the massive fight is how it’s much more equal opportunities than it has any right to be. Though the newer toys do slightly better, there’s still an effort not to have the obvious older characters be the only victims. You’re as likely to see Horri-Bull sliced down by Blitzwing or Buzzsaw strafe Cutthroat as you are to have Scorponok casually rip apart Tantrum.

It’s also worth re-emphasising that Budiansky was expecting to leave the book after the Underbase Saga was concluded, so here and in the next story he avoids any caution about killing off characters he might be obliged to use in future he would have previously shown and becomes demob happy as he takes great pleasure in the gratuitous violence. Guts and innards and thrown everywhere, and it’s just a shame that (presumably because the scripts weren’t that exact about naming characters) several of the Decepticons quite brutally taken out here will be running about in Dark Star only to be brutally taken out again, rather lessening the impact.

During this excitement we get an unexpected source of humour as it turns out Starscream and Buster make an excellent double act, with the quote I used to open this piece being especially brilliant. Unusually for when he’s written as a schemer, it’s actually quite hard to hear Chris Latta’s voice in Starscream here as he’s much more smoother and self aware than his TV counterpart. But he’s not just doing this for fun, the entire staged fight has been arranged so as to get Scorponok’s troops out of the ship and allow him to steal it. 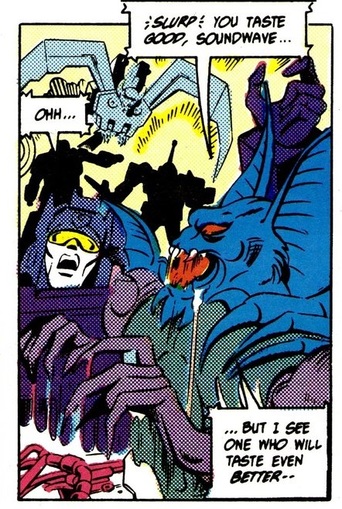 Best ever use of Soundwave's mouth.
But before he goes, he dumps Buster out on the ice in just his t-shirt and jeans with a stark offer: He has a distress signal that will summon the Autobots to save Buster, but when they arrive this will unite the nearby Decepticons to slaughter them. In the end though—as Starscream blasts off in Scorponok’s ship, much to the confusion of those watching—Buster decides stopping the Underbase is all that matters and presses the button.

Which is where the issue ends as far as American readers were concerned, but because this was another chronically short issue and the next was a double sized special the UK team have taken the decision to move the two page prologue to the US issue 50 to close out Cold War! This is a surprisingly bleak slice of cosmic action as we see the Underbase passing through space and leaving death and destruction in its wake, including destroying a sun. Though the main purpose of this was to recap what the Underbase was at the start of the new adventure, the threat that it is now heading to Earth makes for an effective cliff-hanger.

I was actually surprised by how much I enjoyed this. Indeed, I’d go as far as to say it stands up better than most of Time Wars. The only real let down is Nel Yomtov, who continues his bad day at the office with as much grey block colouring as he can get away with. Also, whilst mis-colouring the seekers is not an uncommon mistake, confusing Thundercracker with Starscream when the latter being elsewhere is a key plot point is especially poor. 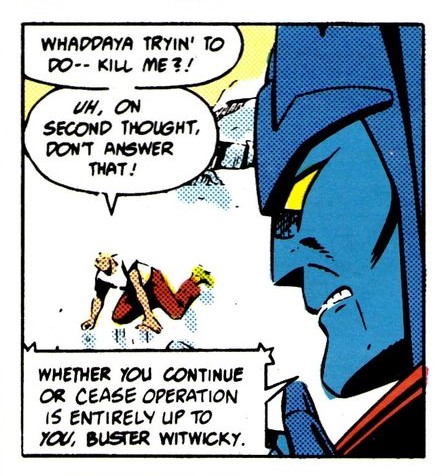 Thew new Hale and Pace.
Transformation and its continued jumping through hoops over the placement of Time Wars takes a turn for the seriously odd this week as it categorically says the first story to be set after that epic will be in issue 215. Let’s assume they still didn’t know about the three strip format that looms large over the book at this stage and try and work out what the original plan for 215 would have been:

So, The Man in the Machine! finishes in 212, presumably either we were going to go straight into the next run of British stories or the Mechanibal issues. The former is more likely, meaning 213 would have been the one part version of Fall and Rise of the Decepticon Empire, with the next two issues having the two part Race With the Devil. The second part of which makes for a strange story to make a thing of as the start of a new era. The other alternative would see part one of Recipe For Disaster!, an equally odd choice (Fall... being intended for just one issue does make it a bit of a wild card in that it could just have been intended to slot in-between American reprints, but that still doesn’t make much sense of this statement).

So, either something was lost along the way (and the teasing of the ever-delayed Classics UK 6 suggests there were some drastically different plans going forward from what we got); the editorial was written by someone who didn’t have a clue what they were talking about or it’s a simple typo for 211 as The Man in the Machine! obviously has to be set after Time Wars as Spike retires in it and Maximus is shoved in a cupboard.

Dread Tidings sees Dunc and Mouse (!) ask the question we’ve all been wondering: Why don’t they bring back Matt and the Cat? A question that apparently left the stubbies in tears. Dreadwind is also excited to have his first letter from a woman, albeit one who has presumably met other Transformers fans and decided it would be best to withhold her name. Very wise.

They're messing with our minds.
Action Force sees Destro fight Destro, and rather like Combat Colin last week the usual “Everyone is confused as to which is which” scene is subverted as everyone just assumes the real Destro will win. Which indeed he does, and as there’s a member of Cobra who is a famous master of disguise the imposter of course turns out to be...

Major Bludd? Which seems a bit random and is something I don’t think will ever be followed up on or mentioned again (though Destro does vaguely guess it might have something to do with Serpentor). Still, the story ends on a high as Destro fulfils his agreement with Action Force as he finds Lady Jaye kind of hot.

After the heights of the last few weeks, we get a more pedestrian Combat Colin where he dons a suit of armour to take on a local thug with mildly amusing if not Earth-shattering consequences.

Before we finish, do check out the comments on the last issue where reader and Rock Lords expert Blueshift has a link for more information on the William Tell TV series I’ll be shamelessly stealing from when it comes up again.

Also, I’ve been lucky enough to sell a short story professionally to an anthology from Mad Scientist Journal, you can read a little about it HERE and I’ll be talking a lot more on it when the book comes out. I mainly mention it now because one of the standard things I’ve heard over the years from people who don’t like my reviews is “Well I’d like to see you try and do better”. Well now you can!

Next week, Budiansky reveals he’s a big fan of early John Carpenter. But aren’t we all? 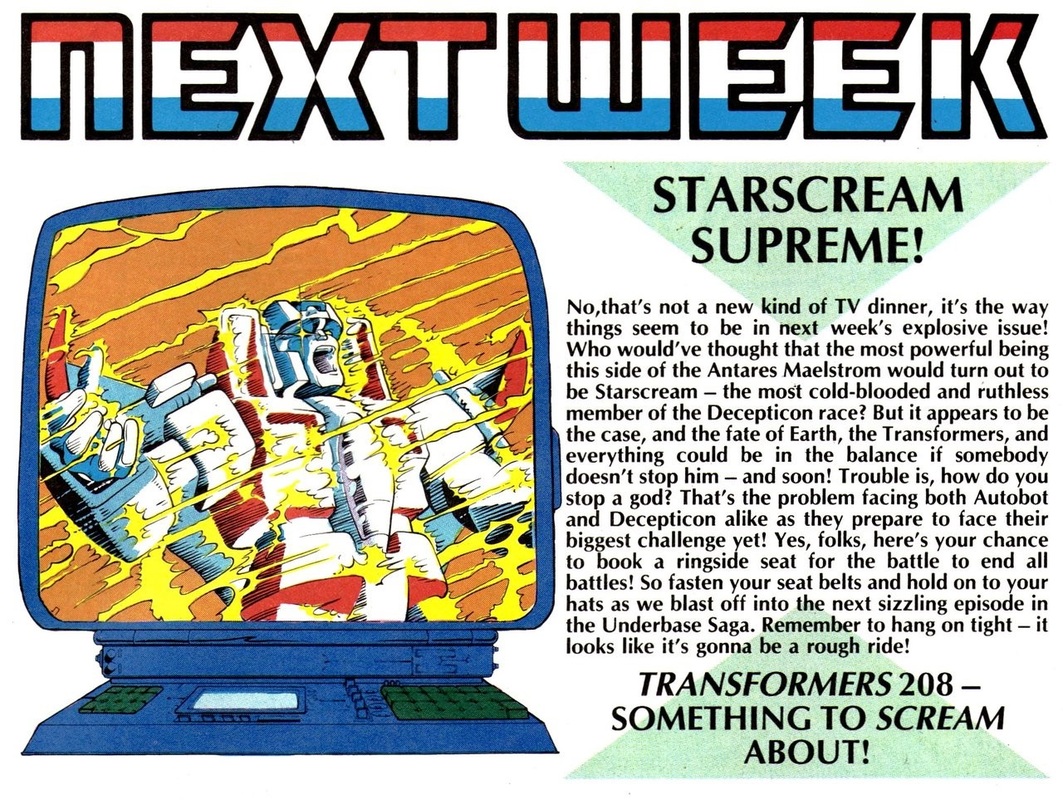