But Baby, It's Cold Outside. 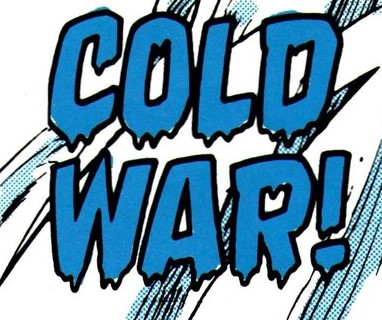 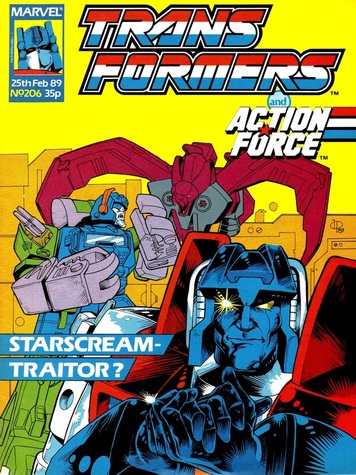 Where you go is your business Scorponok. Just keep your fleshy face out of mine!

And we’re back. The UK comic’s attitude to the Underbase Saga has been begrudging at best, but now Time Wars is done and dusted we return to the interrupted attempt at a super epic from Uncle Bob.

We’ve discussed the flaw in the placement of this story that Furman as editor has been trying to present and how Underbase can only conclude after Time Wars and not before. Myself, I’d actually place the UK story exactly where it was printed, in-between Club Con! and this issue. There’s nothing to say this isn’t the case (which is helped by none of Ratbat’s troops being involved in the British adventure) and having only just recovered from being punched through the chest gives Scorponok an additional reason to not be in a good mood here.

The new adventure proper opens with a deliberate visual contrast to Club Con! that has sadly been lost with the breaking up of the US stories. There Ratbat’s troops were operating out of the Caribbean on their SPACE tropical island, here that same base has been moved to beneath an iceberg in the Arctic, which shows that the ultra efficient Ratbat knows how to pick a location that will lend itself to an amusing story title.

The story itself is an interesting example of how breaking up these American stories into chunks can affect how they read. The focus in the full version is very much on the big fight we’ll be getting next week, but here in the build up we instead get to enjoy an almost Fawlty Towers level of awkward comedy as the two Earth based groups of Decepticons finally meet up and are played off against one another by Starscream. 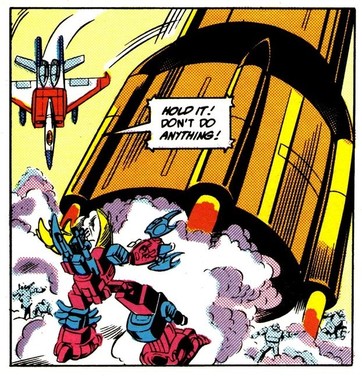 "MY SWORDFISH IS ON FIRE!"
Things do start by looking as if we’re going to jump straight into the action as the approach of a mysterious spaceship sees all of Ratbat’s troops (and the mass crowd shot is a sign of the scale the rest of the Underbase is going to aim for) scrambled for action and Piranacon grabbing the invader by its thrusters. Which presumably leaves him with a smoking hot groin.

However, expectations are almost immediately subverted as Starscream sheepishly appears and reveals he’s been in contact with Scorponok and invited him over for tea and scones but “forgot” in the rush to move to their new base. It’s a smart move on his part as it instantly puts the two leaders on the wrong foot from the off. In fact, Starscream is brilliant here with his shameless friendly demeanour being a clear influence on how John Barber currently writes the character.

This is followed by some forced exposition as Ratbat and Starscream recap the Underbase storyline to date (interestingly both here and when Blaster and Optimus are also recapping at one another later the focus is almost entirely on Club Con!, adding to the feeling that the message in The Flames of Boltax! Could have been covered in a post-it note). Luckily though this manages a great pay-off as the fuel auditor shows off Buster whilst mocking all human kind, only for Lord Zarak to reveal himself. Not like that, mind’s out of the gutter. We’ll assume everyone talking about him and the other Nebulons as being “Human” is a translation conversion as presumably no one is speaking English here, but either way the already strained relationship between the new BFF’s is made even more tenuous.

Ratbat has little enough time for his visitors as he prepares to seize ULTIMATE POWER and so makes the great mistake of pawning them onto Starscream to do the tour. What follows is glorious as Starscream walks the new arrivals around the SPACE island, very carefully only telling them only the dullest and least interesting facts whilst ignoring Scorponok’s increasingly annoyed “But what are you doing to fight the Autobots?” questions. It’s like every bad castle tour you’ve ever been on. 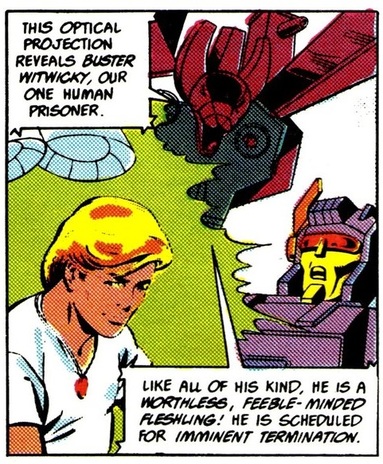 Scorponok's face is what sells this panel.
Having successfully wound up Scorponok as much as he can, Starscream delivers the capstone by unveiling Buster and revealing the human is to be executed, which allows the shocked Buster to throw out his Underbase knowledge, which is exactly what Starsream wanted. As Scorponok goes off in a huff we get a marvellous exchange between Buster and Starscream where the former sarcastically says he’s glad to have helped and the latter has a marvellous Grinch grin as he declares that in future “I don’t think you’ll be much help to anyone...after your execution”. The issue then ends with all pretence of solidarity between the two groups falling apart as Ratbat and Scorponok throw school-yard insults at one another, with Scorpy going back to his ship to have a good bitch at the rest of his troops.

In-between all this we get two pages back in the Caribbean that are—as mentioned earlier—mainly about Optimus and Blaster recapping the events of Club Con! It does at least have the memorable image of them riding Fortress Maximus’ spaceship mode (serving as a boat here) in a scale not too far off that between the actual toys, making the mighty Maximus look like a boat ride on a park pond.

This is huge fun, by playing up the humour it feeds neatly into Budiansky’s strengths and allows him to raise up the often inconsistently written Scorponok (both in terms of characterisation and quality) by playing him off Ratbat, who is by far his best character. Starscream also remains on fine form, making it regrettable that it’s only recently that Uncle Bob has discovered a fondness for him. 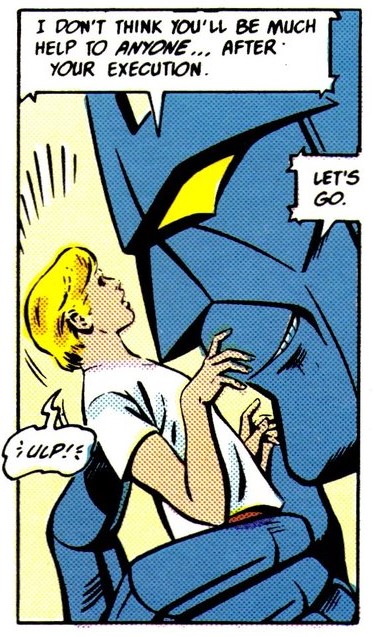 I've never seen Starscream look so happy.
The art is also a lot more solid than on recent American issues, probably helped by the Arctic setting making the all white empty backgrounds appropriate for once. Delbo manages to be on track for the first time in an issue where he’s had a lot of Transformers to draw with no obvious mistakes, and the sheer glee he puts into Starscream remains a delight.

Only the “coloring”—as usual—lets things down as Nel finds the presence of so many Decepticons a bit too much and goes for as many block coloured panels as he can. As the first American issue since the book returned to the “smoother” paper stock, the colours look a lot more blotchy than they have since Space Pirates! as well. Though to be fair, the pages with just Optimus, Maximus and Blaster are both properly coloured and manage to stay inside the lines.

And it’s also a shame the UK team forget to correct Overbite’s name to Jawbreaker once again, even with the original use of the name being a mistake the comic would previously have been much stronger on consistency there.

This may well be the first issue not edited by Simon Furman, though the exact date of his departure remains a mystery (come on Classics UK Volume 6!) it was definitely around this time. One of two signs pointing to his lack of involvement comes on the Transformation page; which is much more positive about The Underbase Saga than the last two editorials mentioning it have been. It (and the Next Week box) is also unusually positive about Action Force, it feels like a different writer is in charge. So, until I’m horribly proven wrong, let’s take this moment to welcome Euan Peters aboard. It won’t be an easy editorial reign as he tries to keep the book going through troubled times and—as we’ll see—not every decision is going to be the right one. 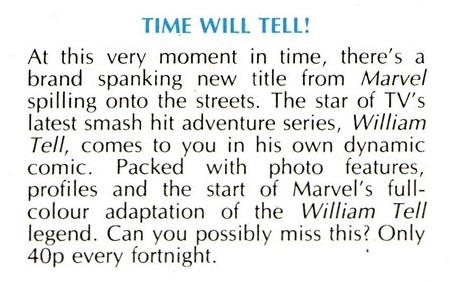 I did manage to miss it.
Transformation also attempts to get you excited for the forthcoming William Tell comic, based around the new TV series. I love crap 1980’s television. I know my crap 1980’s television. I have no idea what this series is (though I would be willing to be it’s a Robin of Sherwood cash-in), which doesn’t suggest great things for the future of this title. The comic being described as an adaptation of the “Legend” makes it sound as if we’re looking at an older Marvel literary piece that’s been polished off with the series’ logo slapped on it.

Another sign of the possible change in editor comes in Dread Tidings, Joseph Sullivan from Dublin is told the Autobot from City of Fear! was called Steamer when Grimlock/Furman previously declared he was Chuffer back in issue 175.

Stephen Goodall from Sheffield also writes in to point out that the Earth in Cold Comfort and Joy! didn’t look as it did four million years ago. He must hate the Doctor Who story Earthshock.

The suddenly much more liked than previously Action Force see the Forcies/SAS/Destro team up steal an old World War II plane from a museum so as to crash castle Destro. Literally as Destro gleefully runs the antique into his own greenhouse. The bulk of the issue is Flint and SAS Toff bantering over UK and US terms (lorry/truck, Guy Fawkes Day(?!)/4th of July), and has one great moment where SAS Other Toff proudly boasts of the plane still working because of British craftsmanship before Destro points out most of the parts were built in Canada. Take that UKIP. 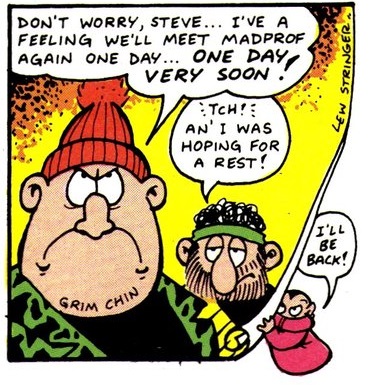 Grim chin!
As well as the one page Dragon’s Claws strip being pressed into service once again just a little too late for it to be of any help for that book, Combat Colin sees the conclusion of his evil double story. Pleasingly (and surprisingly considering it’s Steve) it avoids the cliché whereby no one call tell the duplicate from the original—for an especially bad example see the Star Trek episode Who Gods Destroy where Spock’s inability to recognise the fake Captain Kirk severely pissed off Leonard Nimoy—as it’s obviously the robot winning the fight. Evil Colin can jam Steve’s guns, but not his water pistol which causes a massive explosion. However, Colin puts on his “Grim Chin” as he wonders about Professor Madprof, who pops out from behind the panel to promise he’ll be back. With Aunty Arctic having been a carry over from Action Force, Colin now has the first member of what will become a memorable rogue’s gallery created during his time in Transformers.

Next week—on Thursday as I’m in London to see both John Carpenter’s Apocalypse Trilogy and Never Say Never Again at the cinema over the weekend—this cold war won’t be staying cold for very long. 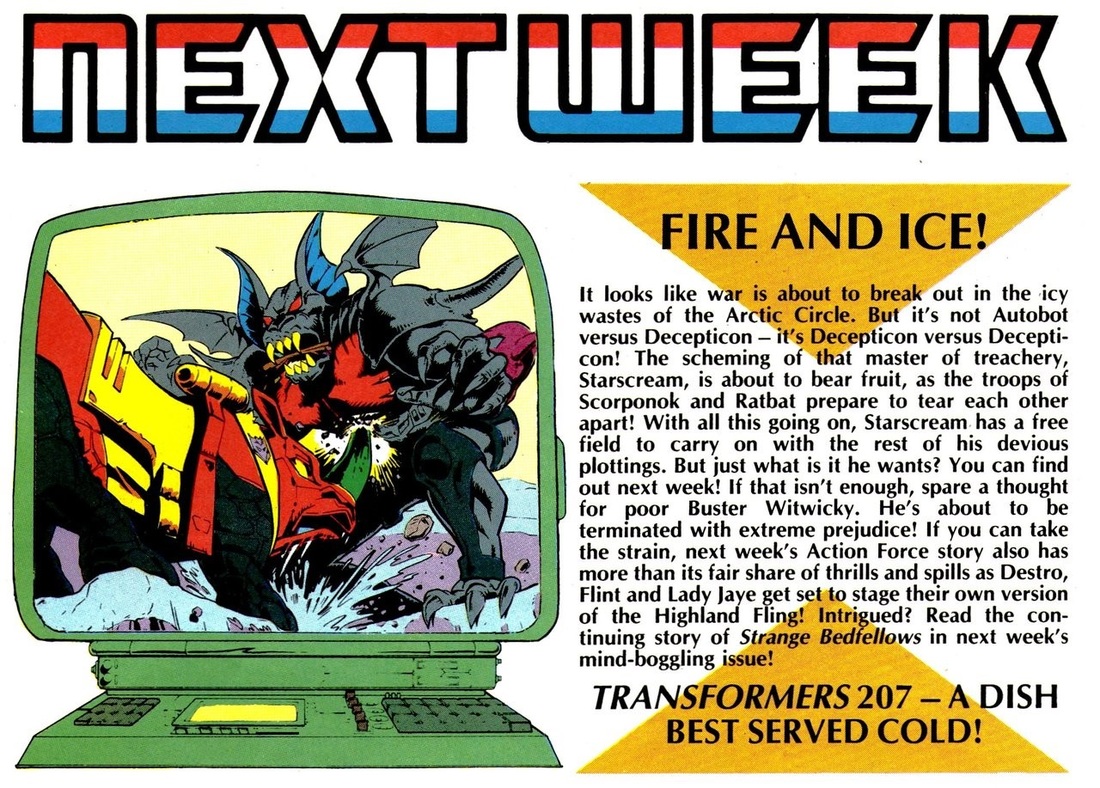