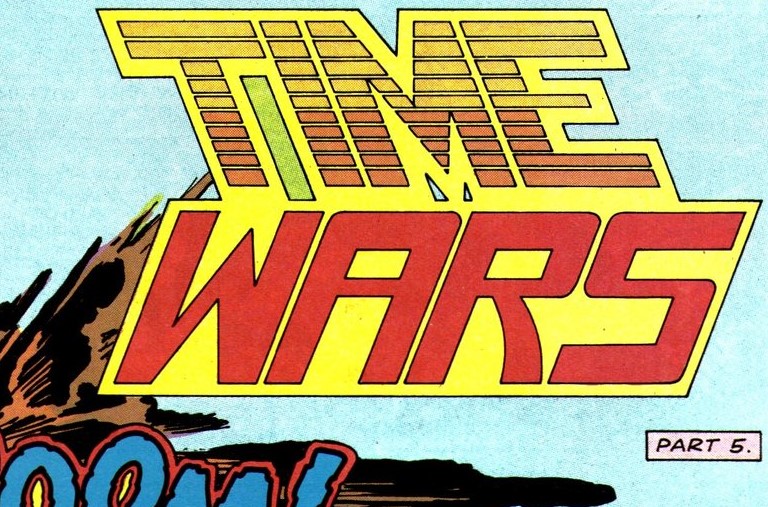 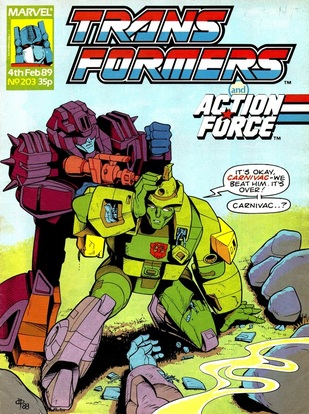 And the carnage continues. Before that though, we get one of the most memorable non-violent death moments in the entire story from an unexpected—though vital for the conclusion—corner with the return of Shockwave.

The idea of Scourge, having now let Springer’s words sink in, having to go back to Fortress Sinister where he so nearly died in order to retrieve Cyclonus (he also comes up with the most sensible reason yet for the time rift—they’d avoided the mass displacement system when using Unicron’s portal and that’s what’s screwing things up) is a smart one as the tension as he and Fracas break into the falling apart base remembering what happened last time is palpable. What they find within though is the not what they or the readers would have expected.

In a story where the implications of future knowledge is having a serious effect on the sanity of the lead villain, we now get an extra twist on the idea where discovering his own death has sunk Shockwave into a massive depression. Sat alone in his throne room, seemingly abandoned by his troops (presumably having run to either Ratbat or Scorponok, having made a pinkie promise not to tell anyone he was alive) he’s left rambling incoherently about how logic means continuing is pointless now he knows his fate. It’s the ultimate realisation of a thread began all the way back in Robot Buster! that the cold exterior is only skin deep and there is the constant threat of panic just bubbling under the surface. 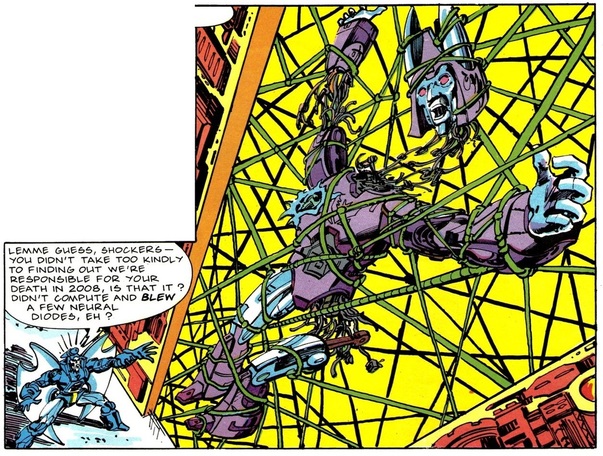 Modern art: Rubbish.
Entertainingly, Scourge’s reaction to a mentally broken sentient being in a considerate “Phewee! Basket case or what?”. A sentiment that is backed up by what Shockwave has done with the body of Cyclonus: Turned it into a garish piece of modern art by hanging it from the wall in netting. It’s another garish image that lets Dan Reed go to town on scaring young minds. Even Scourge, with all the things he’s seen and done, is shocked and that’s what allows Shockwave to shoot him in the back, sending him off a cliff edge down to the foot of the base. Shockwave’s reduction to simple one word statements (“No! Mine!”) adds to the feeling of a broken man.

Speaking of broken men, there’s no shortage of literal ones back at the battle, even if Flywheels turns out to be unexpectedly hardcore as he survived meeting Galvatron’s fist last week. Springer’s decision to keep running continues to annoy Carnivac, but with the likes of Sandstorm being cut down easily there seems little other option but to go back to the Decepticon ship and give Roadbuster a character defining massive, massive super gun. Ravage choses this moment to cut his losses and run, whether because Springer’s words have also sank in on him or because he can’t stand the phallic imagery that’s about to be unleashed is something we’ll have to wait to find out.

Another side diversion is to the Autobot/Decepticon alliance and seems to be there to show they’re finally going to join up with the main plot by responding to a distress call from Springer. However, and surprisingly considering how much this story is an Ending, it’s really there to establish a future plotline as we see Optimus watching events trough Rodimus’ eyes in Limbo. Whilst there he muses on the mind parasites and his ability to overcome them, leading to the revelation that Skids has been there so long now he may be beyond saving. And as we see him surrounded by nightmare imagery the pieces are slipped into place for an adventure later this year.

Back at Death Central, we get two memorable moments, one of which is also key set up for the aforementioned Skids story. The first sees Springer save Carnivac’s life (using a massive boulder no less) despite this leaving him open to attack from Megatron, making the Decepticon reassess his “After this is over the Wreckers die” orders and decide to fight with honour instead. This is where it’s a shame the Mayhems hadn’t been previously established as Wrecker counterparts as a prior antagonistic relationship between the two characters would have made this an even more powerful moment, but it still works and helps to make Carnivac the break out character of the story. 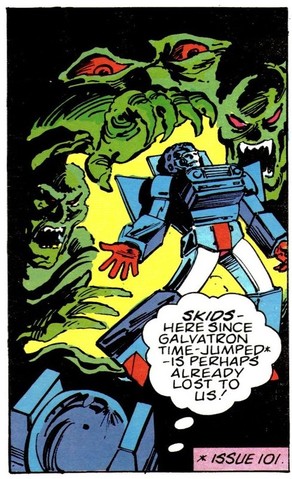 The only time Reed drew Skids with the right face.
The other is the pay-off to Galvatron’s increasingly confused Megatron memories. Roadbuster has Megatron in the sights of his massively large gun and his future counterpart decides to spare him the pain he remembers feeling at the time by jumping in the way and taking a devastating blast to the face. It’s not this that sends him over the edge though, but the fact that This Didn’t Happen before.

The horrific nature of Galvatron’s injury means it’s very easy to miss Roadbuster’s death as the massive gun overpowers and explodes (I’d remembered Rack’N’Ruin dying here as well, but they jump clear), but it’s another stand out moment and there’s much amusement to be had from Springer seeming more concerned about him that Sandstorm’s death. Screw you Sandstorm.

The cliff-hanger see Galvatron—now so loco he’s a steam train—rising up with half his face missing and one eye hanging down. Welcome to nightmare fuel.

Despite largely being about moving pieces into place for the final, this is a hugely enjoyable issue that sees the story finally—though possibly fatally late—achieve its full potential. This is also Dan Reed’s last colour art, and as his brief stink in black and white won’t really work it’s the last time to see him at his best. As Marmite as his work can be, I think even his biggest critics would agree there are enough iconic moments here to have made this a better send off than that which will see his last work on the book. 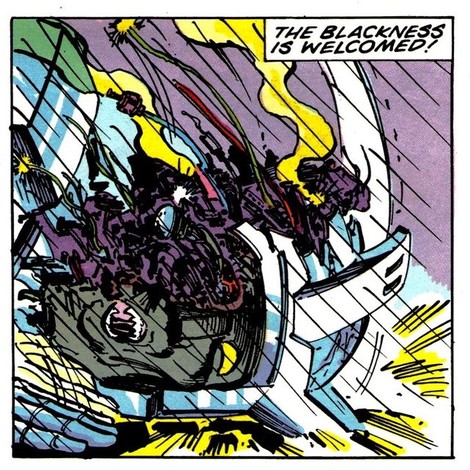 It's the dangly eye that makes it.
The NEXT box is also interesting as the “When all have fallen...” line is one that will, slightly changed and completed, become the cover tag-line to the final American issue. Which feels like firm evidence that Furman is still the editor at this point (his departure is imminent) and this was this idea he then suggested for the other series a couple of years later.

Transformation is written in a light orange that is almost completely unreadable, though luckily however the sidebars are in normal black in. The right hand one is a tease for the forthcoming Sleeze Brothers comic that no one will care about, but it’s the left that’s really interesting.

This sees the editor (again, almost certainly still just about Furman) clarify when Time Wars occurs in relation to The Underbase Saga. This is unlikely to be a result of reader questions as it’s both still a bit early for feedback and this is the first time the UK comic has actually referred The Underbase Saga as such. Up to now there’s been no indication in the reprints that the last two American stories weren’t the typical standalone-with-connecting-threads-that-may-take-years-to-resolve Budiansky work. There’s another agenda here beyond clarification and it’s a slightly cheeky one.

Yes, in a blatant lie Transformation claims Underbase happens in its entirety before Time Wars. Now to be fair, it’s possible the UK team hadn’t see Dark Star at this point and didn’t know it featured the deaths of characters involved in Time Wars (plus the following issue that clarifies Fort Max is effectively mothballed afterwards), but as issue 205 will end with a moment heavily borrowed from that story this seems unlikely.

The truth of the matter is revealed from the closing line: “Why did we break off the Underbase story in the first place? Well can you imagine a better story to go in our fabulous 200th issue than Time Wars? We didn’t think so!” Not only is this unfair as readers can’t make the comparison yet, it seems strangely self defeating to tell kids that an upcoming story is going to be less good (perhaps Furman really is on his way out the editorial door?). This is the biggest sign of Furman’s ego since so much of Gone But Not Forgotten! was pre-empted by Prey!—It’s not enough that his story has to be in the 200th issue, the other big epic lots of death story running either side of it has to be firmly places beforehand chronologically so as to make it less important. 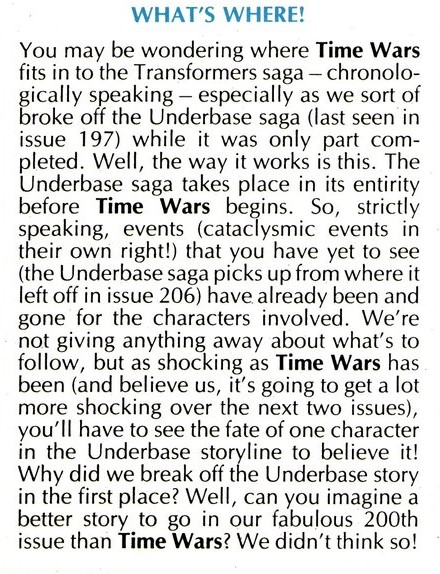 Also note how Time Wars gets bolded as a title every time but Underbase Saga doesn't.
As I’ve said many times, Furman’s strength of character and self-belief is a key component in the UK series being such a success rather than just filler. If he didn’t firmly regard the American stories as an also run we wouldn’t be talking about these comics today. It just feels very odd seeing this attitude so firmly reflected in the book itself. If the page had just had “BUGGER OFF BUDIANSKY, I’M THE DADDY” written in giant letters across it, it wouldn’t be much less subtle.

(No doubt when Classics UK 6 comes out—supposedly in Spring even if there’s not much left!—it’ll be revealed that Furman actually wasn’t the editor any more and this is the work of someone else and I’ll look really stupid with the speculation)
On the letters page Dreadwind has a rather unhelpful week of either not answering questions properly or pointing out errors in people’s musings. However, there is some amusement to be had as Alan Bayles from Durham suggests a Secret Wars III involving all the licensed characters like Transformers joining in, something IDW would eventually sort of do (without the Marvel heroes obviously) on an Annual basis. Dreadwind reveals the very idea and the extra workload involved made Furman, Ian Rimmer and Richard Starkings seriously think about suicide.

Action Force concludes its silent issue with everyone successfully escaping from the Cobra Consulate thanks to Scarlett disguising herself in the Baroness’ clothes. Which leads to the most striking image of the story as it turns out the Baroness likes to weak red lingerie (complete with stockings) to work. No wonder Dr. Mindbender is left speechless when he finds her.

Combat Colin “Goes Yampy” according to his local paper, so Semi-Automatic Steve has to stop him. An attempt to talk face to face results in punch in the face and—in a rare serious character beat—Steve is so pissed at being called “Fat boy” he actually manages to knock Colin’s head off, revealing he’s a robot. Something Lew Stringer has good fun with by pointing out how obvious this is (“The penny drops” complete with actual penny).

Next week... when all else have fallen a hero will rise! 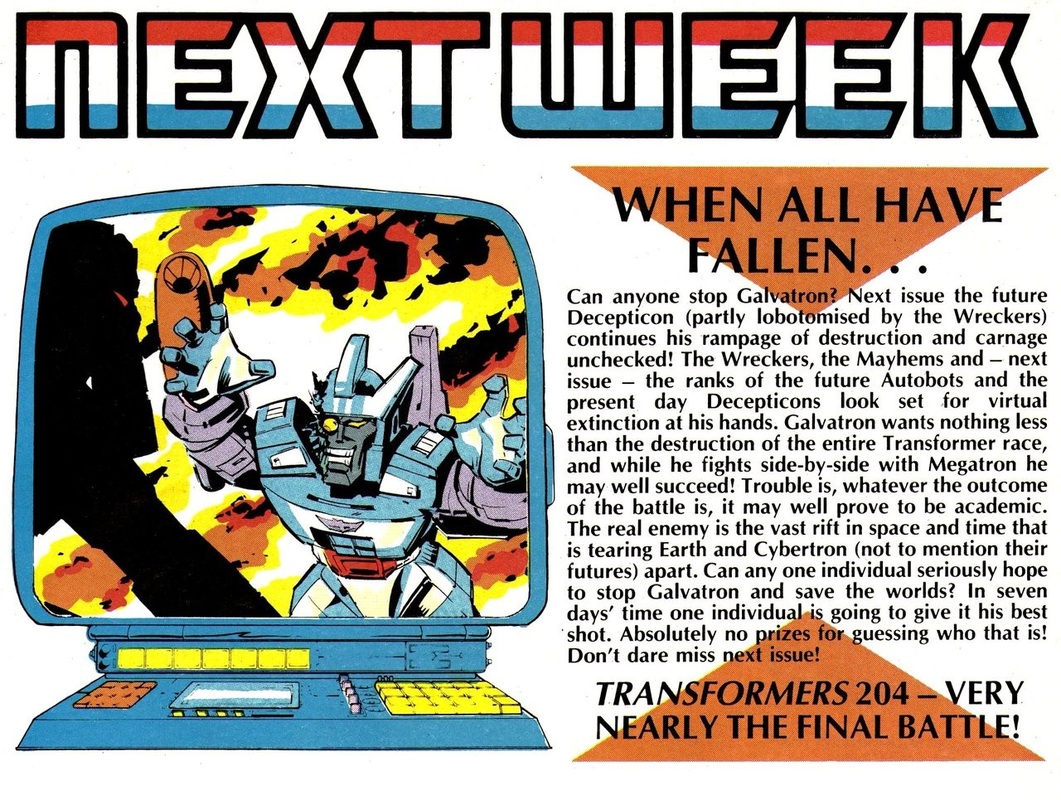