Just the Two of Us. 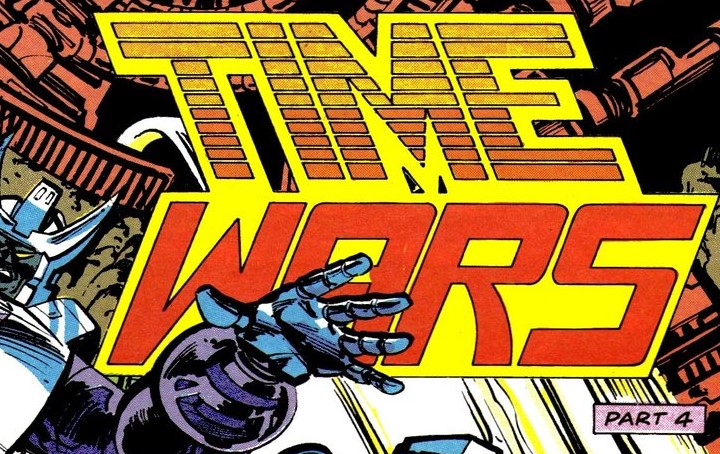 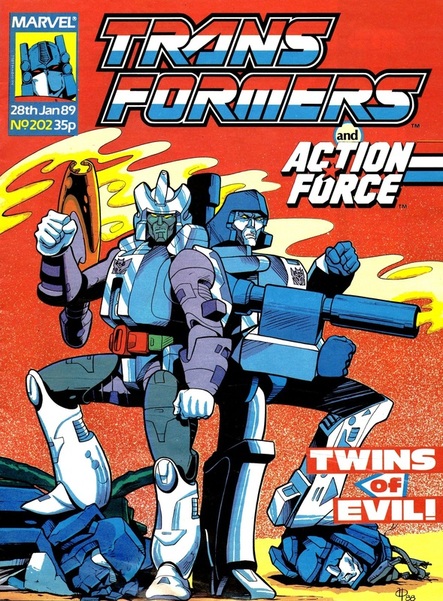 You imbecile Scourge! Must I do everything myself?


After a meandering and frequently frustrating opening three parts, the fact we’re finally getting down to business is signposted by a fantastically memorable Andy Wildman cover of Galvatron and Megatron taking no shit. Though it does slightly ruin the shock deaths of beloved characters Topspin and...err...Battletrap it gets bonus points for the tag-line referencing the Hammer Horror soft-core film Twins of Evil, though presumably neither character will be caught wearing a negligee within.

Inside the plot is split into two halves. The least interesting is the part that feels like it comes four weeks too late, with the hologram of Optimus Prime explaining the nature of the time rift and how everyone needs to team up to send Galvatron back to the future. It’s nice to finally have some forward momentum here, but it’s mostly perfunctory stuff despite some solid layouts from Dan Reed that help the reader keep track of who belongs to which group of Autobots and Decepticons (and also includes some nice background details such as Hoist fixing Goldbug). Scorponok’s suggestion that they don’t need to spend time planning, they should just go kick Galvatron’s ass is pleasingly direct after last week as well.

There’s also a neat scene transition back to the issue’s main action as Optimus reveals he can’t come back to reality due to he and Rodimus being past and future versions of one another (which of course they aren’t. It would make more sense if it was having the Matrix in the same place at the same time twice that was the issue), then switching to Megatron and Galvatron cutting it up amongst the Wreckers/Mayhems force.

Yes, the real interest of the issue is the massive 14 on 2 battle royal. Coming right after last week’s fight long issue this should feel like nothing more than extra padding, but instead it’s the most satisfying sequence of the story to date. It also helps that seeing Galvatron and Megatron in action together is something readers would have been keen to see since their brief Target: 2006 meeting over two years ago. This makes it inherently more exciting than a Rodimus Vs Fort Max rumble that no one would have ever thought to ask for.

It is however fair to say that this is not an issue for people invested in convincing military tactics. You’re on page 4 before anyone thinks to pull a gun on the two Twins of Evil, and most of what follows is characters standing with looks of mild surprise on their faces as they die horribly (though Flywheels at least tries the tactic of beating Galvatron’s fist with his face), as a sample of the skills of both the Autobots and Decepticons crack commandos at the top of their game, it probably explains why the war has managed to last four million years. It certainly feels a bit rich when Springer berates Carnivac for not following the plan. That’s the walking around chatting loudly plan is it Springer?

We shall remember you Battletrap!
It also hurts somewhat that there are no familiar characters amongst the Decepticons bar Flywheels. Battletrap is the first to fall and gets a great death and Galvatron crushes his chest and then chucks him into a wall, but how much more dramatic would it have been if it had been the Duocon we’d previously gotten to know and like to die there?

However, when a character we actually care about dies, it’s a brilliant moment. Topspin actually has the brains to have brought a gun with him, and he’s rather dismissive of Megatron for not being as powerful as his future self. Which is a bad mistake as Megatron vaporises his head with one shot. It’s the sort of brutal violence we were promised when this story started and has been too long in coming.

There’s actually less death here than might seem to be the case (though it sucks to be a Deluxe Insecticon), but this is where Dan Reed really comes into his own with panel after panel of brilliant nightmare imagery that lingers in the mind of readers decades later. The panic in the falling troops; the evil in the minds of Galvatron and Megatron and the darkness of the violence are all perfectly conveyed and even more than the zombie story this is an issue only he could have drawn this intensely.

Amidst the blood and guts there’s even time for a scene with key characters development. This sees Scourge confront Carnivac and Springer, with the former rather hypocritically mocking the Decepticon for being unarmed (it’s the old Targetmaster trick. Though Carnivac does suddenly pull a gun from nowhere before the end). Springer gets to show how he has overcome his previous doubts in his leadership abilities as he calmly and rationally makes the case to Scourge that he and his colleagues are destroying reality, even having the intuition to spot Cyclonus is missing from the group and to use that to make his case even stronger.

Ultimately he doesn’t give Scourge chance to make a choice—instead using the indecision to take the ‘Con out—but it sows the seeds for not just beardy’s change of heart and actions at the end of the story, but also Ravage’s choices as well due to him listening (even if he doesn’t seem convinced at this stage). It also shows of Carnivac and Springer working as a team, much to the latter’s surprise. 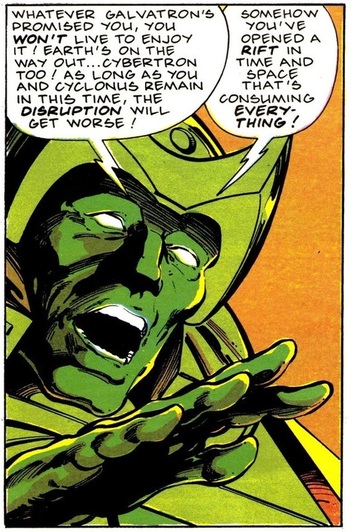 Springer is now so assured as Wrecker leader, it's a shame his team is mostly dead.
This odd couple relationship is then further developed as Springer insists they must retreat and regroup, which Carnivac reluctantly agrees to, with the reassurance that he’s going to kill Springer when all is done and dusted means no one will ever know he ran. Considering these two characters only met for the first time last week, Furman has done an impressive job making it feel as if they’ve been worthy adversaries for years with just a few lines of dialogue.

The other interesting example of character development comes from Galvatron of all places. After being mostly sane since his escape from the volcano, it’s here established that he’s back on the downward spiral as his memories of being Megatron are contradicted by what is going on around him. It’s surprising it’s taken this long to acknowledge that the future characters should have memories of what happened in the past (it’s noticeably previously been ignored with Ultra Magnus way back in Wanted...), and his confusion at thinking on what Carnivac went on to do and recalling that they didn’t originally follow the retreating troops makes for some memorable moments. Reed also perfectly captures Megatron’s look of doubt at his successor’s second breakdown over this, which neatly sets up the direction his character is going to take.

This is also the first hint that the future we’ll be getting after this story won’t be the one we’ve seen previously. Future revelations about this Megatron will confuse things, but it’s clear Furman is already thinking he wants a completely clean slate for what comes after without having to worry about leading towards the film. This likely coincided with him starting to really dig down and think about his American work, if he already had Unicron based plans in embryonic stage taking care to make clear the 2005 version of his attack will now never happen is smart forward thinking. Even though this new future history will be even more starkly stated in Aspects of Evil! many fans (including TMUK as I discussed in the Eugenesis piece) simply chose to ignore it as part of the “Make everything fit” mentality many of us have. 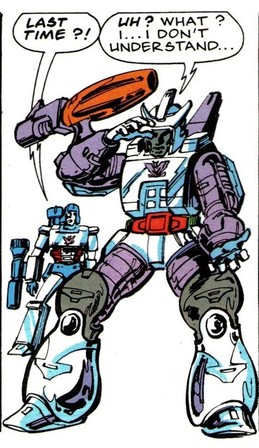 The relationship betwen Galvatron and this Megatron is only going to get more confusing.
Galvatron’s further confusion over what he remembers with the past coincides with a cliff-hanger that shows all hell has broken lose and the time storm has began to attack Earth, with one helpful woman screaming it’s “THE END OF THE WORLD”, oddly a cinema on the street she’s on seems to be playing a film called The End of the World as well.

No matter the flaws inherent to some of the structure, this is the perfect nightmare issue that shows just how good Dan Reed can be when given the right material. I certainly won’t be sleeping well tonight after this.

Transformation presents the 1988 Readers Poll, with results to be in by February 10th. It’s hard not to feel sorry for Visionaries as the categories based around the backup strip only allow for Action Force based entries. Having a Least Favourite Story vote seems somewhat mean-spirited as well, Colin Baker wouldn’t like it for a start.

Dread Tidings is all about Cyclonus this week. First Daniel Matthews from Greystones asks how head removal could be fatal for bunny ears but not Fort Max, to which Dreadwind explains (and even demonstrates on himself!) that any Transformer can take off their noggin with proper preparation, but the way Cyclonus did it will always be terminal. Meanwhile Russell Fleming from Rochester uses the threat of rebuilding Unicron to ask if Cyclonus is really dead. In keeping with Galvatron’s confused memories Dreadwind explains that Cyclonus will still be created in 2005...and who knows what will happen now? 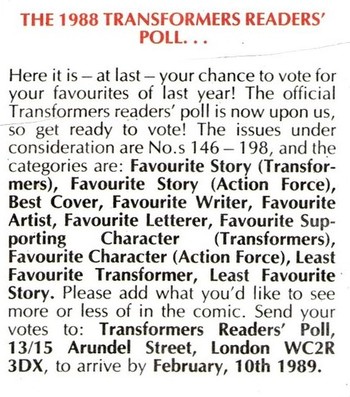 Get your votes in now!
Action Force sees Stormshadow continue his silent rampage through the sewers, whilst Scarlett is almost caught by the Baroness before she makes the mistake of looking in the infiltrator’s cleaning cart. Which contains Timbre the wolf. All whilst Snake Eyes manages to escape from the brainwave scanner because he’s a ninja. Again, it’s a fast read and perhaps the least interesting of the three parts to date, even if the wolf surprise is a great moment.

Combat Colin is seemingly returned by the strange device that teleported him away (and a neat bit of meta humour sees Stringer point out he’s redoing the gag of Steve not being able to say dematerialised), but he instantly goes on a crime spree! Has Combat Colin turned evil? GASP.

Next week, the cover suggests Carnivac and Springer have won. But will it be that simple? 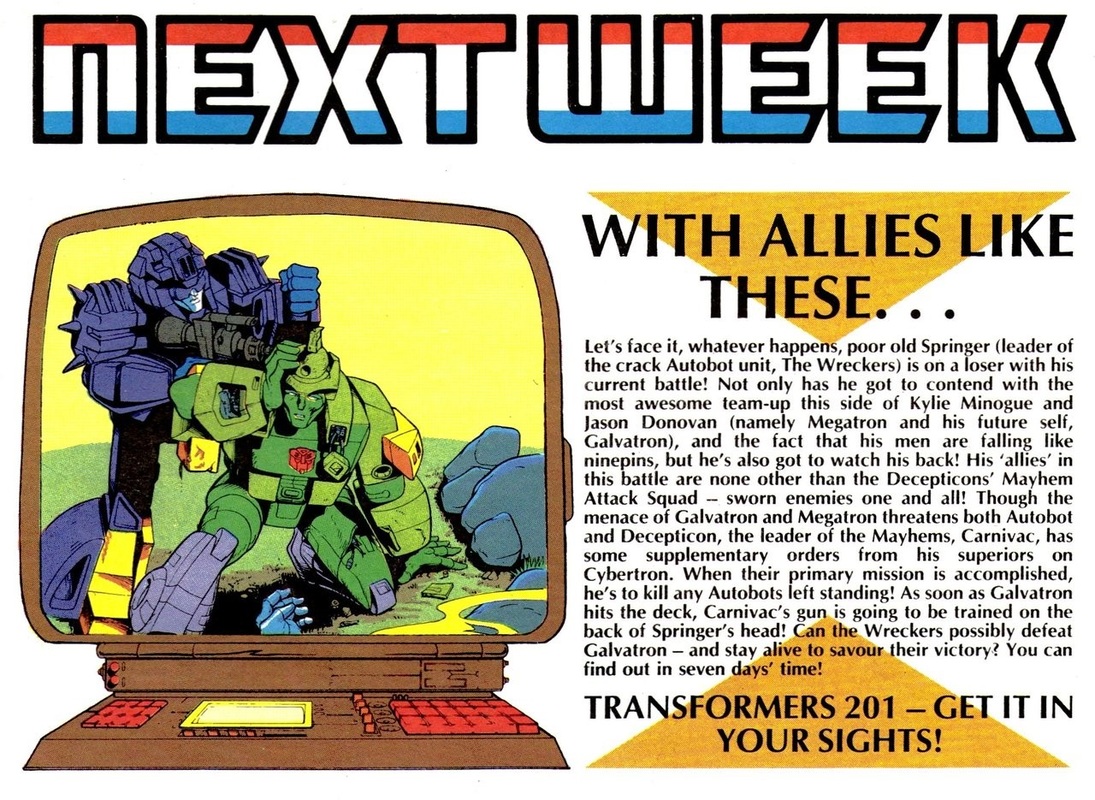