You're So Consumed With What You Can Get, You Waste Your Time With Hate and Regret. 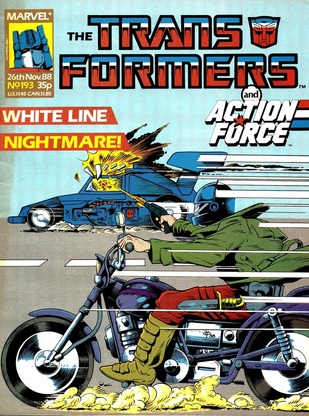 
These humans have caused us all the trouble they’re going to cause us. And we don’t owe them anything.


*My decision with the name last week is vindicated by Cash being spelt properly in the UK created title for the second half. Though they admittedly also spell “Carnage” correctly, but I am nothing if not contrary.

Blimey. As I’ve noted on many an occasion, the overall objective of this project is to be generally positive, on the grounds that no one would want to read this many words if they were endlessly negative. And I think my discussion of Monstercon From Mars! shows I am more than capable of finding an un-ironic enjoyment in what many would regard as Uncle Bob’s weaker and sillier stories.

But the conclusion to what he may well have been expecting to be his last standalone story is not only weak; it’s so incredibly pro-faced there’s very little enjoyment to be had from it.

But let’s talk about what works first. Yes, the fact “Mr Z” is Zarak and that the Roadjammers have inadvertently been working for the Decepticons all along was fairly obvious. But it’s still a subversion of the usual RAAT/III style group and in a story that is otherwise a greatest hits package it does make for a mild twist.

Of course, then you think about the logic of it. First, Zarak has built machines that can stop any Transformer dead in their tracks, why not just give them to Decepticons to use rather than using humans? At the very least there was no reason to release Autobot prisoners for a test just to see if they work. 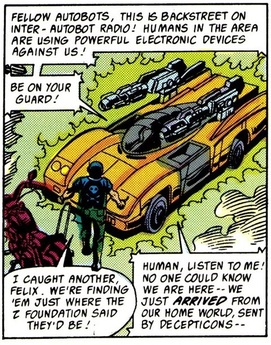 The start of many embarrassing days for Backstreet.
Then even if you’re going to use humans, why tell them you’ll pay for both Autobots and Decepticons? Why not just portray the Decepticons as the good guys, as Ratbat is doing at this very moment with the successful Decepticon run holiday resort we’ll be seeing next week? Between that and Zarak’s relaxed attitude when he finds the Roadjammers have captured the new Decepticon Headmasters (yes, Mr L, Mr K and Mr B are part of that select group of never seen before Nebulons who binary bonded with that equally select group of never seen before Transformers who have been on Scorponok’s/Fortress Maximus’ crew all along) you’d almost think he has some sort of deep desire to fail.

Oh, I quite like the bodies of Fangry, Horribull and Squeezeplay being dumped in a car park under a sign saying “Don’t leave the keys in your car”, a minor moment of intentional humour that the issue could have done with more of.

The problem with the opening action scene of the Roadjammers taking down the three Autobots is they just have it ridiculously easy, making for some quite un-engaging sequences of each car being surprised and shocked as a biker turns up and traps them in The Autobot Run from the cartoon. Which is quite a bastardy thing to do all considered, but with only Fizzle trying to talk to Whichever One tries to grab him (and thus planting the seed of the Z Foundation being infiltrated by Decepticons. If only they hadn’t said both sides were evil!) to add some variety it’s hard to care. From a UK perspective, it`s especially hard to square this timed incompetent Fizzle and Sizzle with the zombie crushing versions from earlier in the year as well. 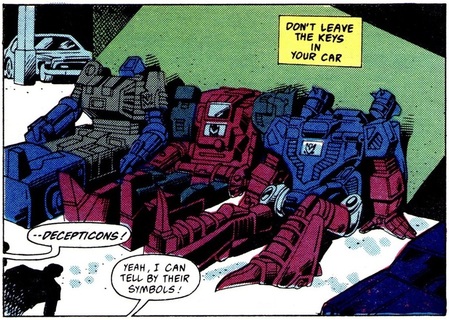 Best bit of the issue.
It then turns out the Roadjammers tech guy is actually better at understanding Transformer built Transformer jamming devices than Transformers are, converting them to work on more than one Transformer at a time so they can turn the tables on the three new Headmasters when they break into the Z Foundation base. Even more amazingly they can control their bodies (and the Autobots) as well, setting them on Scorponok.

This action scene works better, and it’s nice to see Scorponok get overwhelmed by sheer numbers in the struggle. It’s just rather too neat that the only way for Zarak to survive is to use his anti-jammer device to free the other headmasters, which luckily will free the in-range Autobots as well. A little less pissing about with introducing more Roadjammers than the story needed in the first half could have left space to set up this handy little gadget more neatly rather than just before it has to be used.

With the freed Autobots and Roadjammers all having run away, the issue concludes on a “The end...OR IS IT??????” note with the Roadjammers now having their own jamming device and the knowledge that there’s a lot of other people who would pay to see Transformers scrapped. Tellingly though, even when running through his last five issues in complete desperation Uncle Bob would not even contemplate following through on this. Unsurprisingly nor would Furman, even when struggling to find enough loose ends from the American series to fill 20 issues of ReGeneration One. 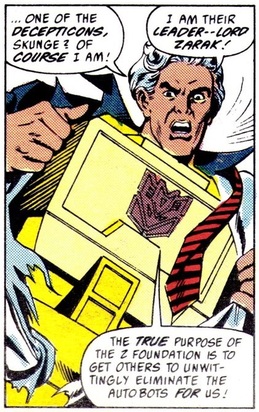 The most mental panel of the whole Delbo era.
On art, most of the Transformers being stuck in vehicular mode means Delbo has less of a struggle here; though he can’t do much to make the Nebulons ripping off their perfectly tailored suits to reveal their blatantly much, much larger armour underneath seem convincing.

The real shame here though is that this is the last time we’ll see the Sparkler-Minibots—and it’s odd to see Transformation follow the example of their one American appearance and use the toy name of Sparkabots—characters who have been (along with contemporary Ultra Magnus) the backbone of the present day British stories throughout 1988. Sadly when Furman throws Magnus on the sacrificial alter of plot they’ll be going with him, meaning for all that we know the Roadjammers went straight after Fizzle and Sizzle and killed them both with the improved jammer. With Guzzle then crying himself to death in grief.

There’s also one puzzling thing about this story, in that we’re introduced to the new Decepticon Headmasters but their Autobot counterparts are nowhere to be seen. Indeed, we won’t be seeing them for some time (and for even longer in the American stories) and Budiansky himself will never touch them. Were Nightbeat and company not released at the same time in America? Or—at breaking point with the ever increasing wave of new toys—did he just go “Fuck that” to the blander looking characters that don’t even have the good grace to turn into monsters? 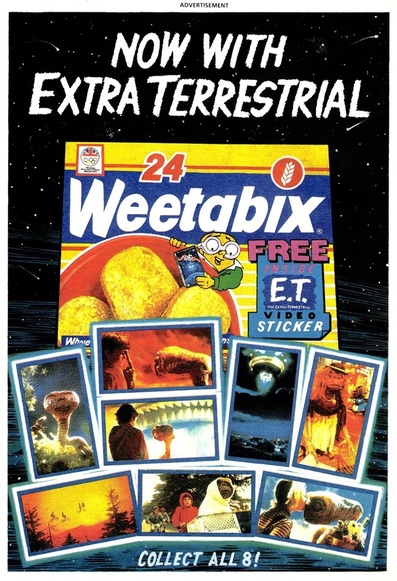 Imagine waiting seven years for a film to make it to home media.
The Death’s Head and Captain Britain trade promotional tours are still in full swing, meaning Transformation gets to heavily promote both. On the 26th November Northerners get the chance to meet Furman and Hitch in different signings in Leeds and Manchester. The issue also runs the second one page promotional Death’s Head comic (which to my eye looks like it could actually be Geoff Senior rather than Hitch). And as a sign of that book’s problems in finding its format, it presents the Spratt as sidekick/Los Angeles Resettlement location (though the strip itself is set on another planet) as the status quo despite the fact readers won’t have gathered this from the just released issue 1.

On the plus side though, the simple gag of Death’s Head being hired to defend a planet of blatant Care Bear knockoffs from Viking munchkins is good straightforward fun.

Dreadwind is really getting into his stride now, and (the seemingly cockney) Hi-Test even gets to speak again in response to the first letter addressed to him as he answers the second letter about the Powermaster adverts getting Dreadwind and Darkwing’s names the wrong way round.

Action Force sees an unlikely coincidence reveal to Cobra Commander that his son Billy is actually still alive. The most interesting part of the issue though is a rather obvious (original American) editorial change on behalf of the Comics Code as sniper Low Light has some dialogue declaring he’s shooting a Cobra trooper with a tranquiliser dart, despite the art clearly showing a bullet going through the poor guys neck. The faux cliff-hanger may seem mild to anyone not familiar with the series, but the threat of Stalker (having led a team that has infiltrated the Terrordome and found Snake-Eyes. Amusingly for all the talk of how much more awesome he would be at this than Flint, he’s achieved nothing here) telling one of his endless “I was in Vietnam with the only character in this book the author cares about” stories is terrifying to any long term reader.

After a shaky attempt at an epic, Combat Colin returns to form with a nice and simple—but hilarious—gag about Colin teaching Steve to use a bow and arrow with predictably inept results. I especially love Steve’s normal gun being called a “Thermo-nuclear peaceblitzer”.

Next week, it’s the beginning of duelling Big Anniversary Issue Number Epics. Will Time Wars win with a time-out? Or will the Underbase undercut the opposition? Find out as the later starts in a club where drinks probably cost a lot but the sea is present. 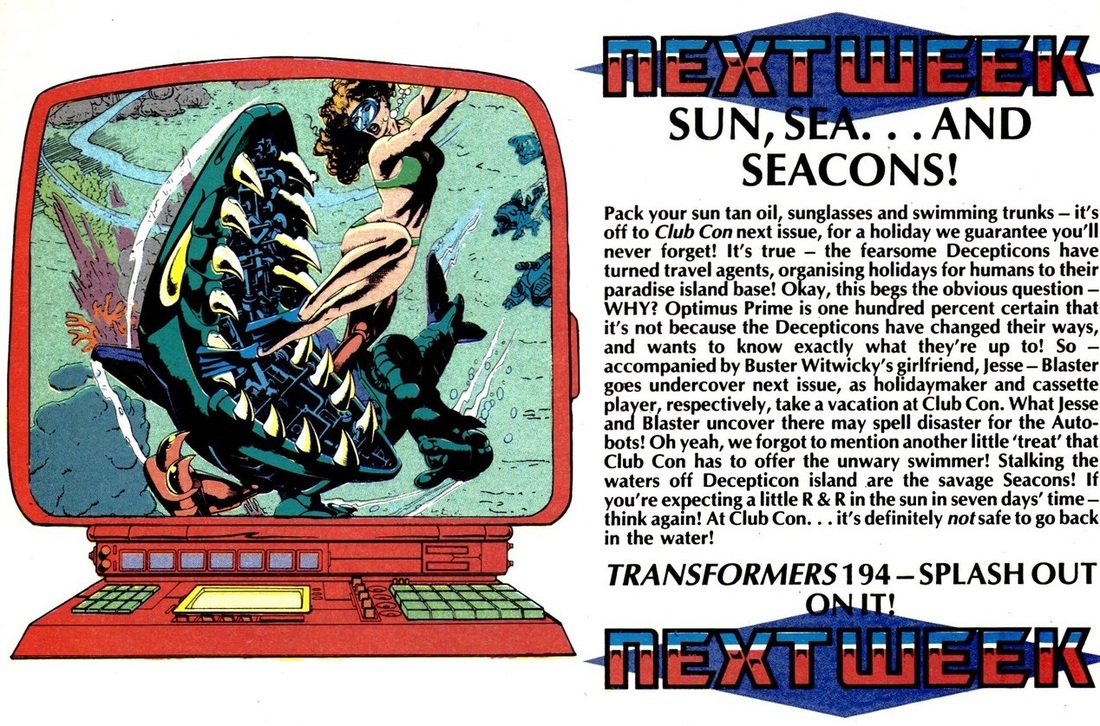