The Diamond Dogs Are Poachers and They Hide Behind Trees. 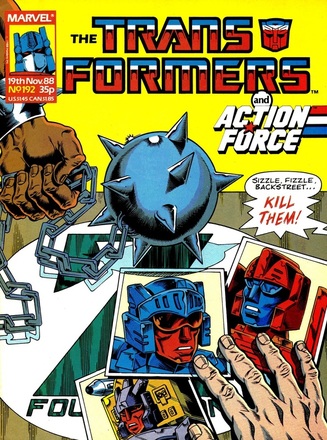 
Overconfident, eh? Just the way I like my victims!


*The logo renders the first word of the title as “Ca$h”, and that’s often how it’s spelt on websites. But come on, it’s just a logo conceit, you don’t call last year’s flop Marvel film Fant4stic do you?

This is actually more of a key issue than it might at first appear. In two weeks we begin a Great Big Epic (though that’s not how the UK will treat it) that is clearly doing more than just leading up to the American issue 50, but also written on the assumption it will be the grand finale to Bob Budiansky’s entire run on the series.

Whether there was any real chance of him leaving the book with 50 or if there was just a forlorn hope his pleading for escape might finally be headed (at this stage outright cancellation was probably more likely) isn’t completely clear, but the final five Uncle Bob stories following the end of the Underbase Saga are very obviously written by someone who didn’t still expect to be there. So to all intents and purposes Cash and Car-Nage! was written thinking it would be the author’s last standalone issue. This automatically makes you look at it and wonder how it reflects his overall body of work, especially as it’s more typical of it than the following saga will be.

Perhaps fittingly when read in this context, this is very much a greatest hits package. There’s two plots running in parallel here which meet at the end of the issue, involving: large organisations dedicated to destroying Transformers (who employ a Billy Dee Williams lookalike); eccentric robot hating humans; a Decepticon prison on Cybertron where the inmates expect to be melted down and said prisoners being used as unwilling agents in a Decepticon plot that involves them being sent to Earth. Some of this will be subverted next week, but overall it’s presented as a victory lap before Bob knuckles down to finish off his tenure. It certainly feels right this is the last time we see the original “actually looks like a bridge” Space Bridge. 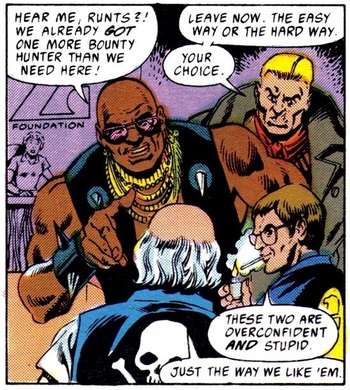 Isaac Hayes, Deller from Dragon's Claws and two guys.
Of the two plots, it’s the Earth based shenanigans which feel the most tired. Four bounty hunters (there’s only actually any real need for three of them as two are a pair that consists of one telling the other how great he is) are recruited by the mysterious Z foundation in order to hunt down the “Evil” Transformers with the aid of a small device that stops them transforming in exchange for big pots of cash.

Actually, scratch what I said about there only being the need for three of the bounty hunters, there’s really only enough plot for two. “Burn Out” and “Roadhog” are effectively the same macho terribly dressed one dimensional cipher, only differentiated by the fact one can shot and one can drive. At least Felix (who doesn’t even feel the need to go by a silly nickname and is the one with a hanger-on) has some Bond style gadgets and is more mild mannered. This only really needed to be an odd couple story rather than a foursome. Tellingly the first two are recruited in almost identical “Z Foundation set up a family friendly charity event which they somehow expect will lure robot hating bounty hunters so they can be approached clandestinely” scenes. This makes Felix just seeing an advert in the local police station when handing in a catch inadvertently quite funny.

Ultimately, the only interesting thing about any of them is the bizarre coincidence that Burn Out looks exactly like Deller from Dragon’s Claws. 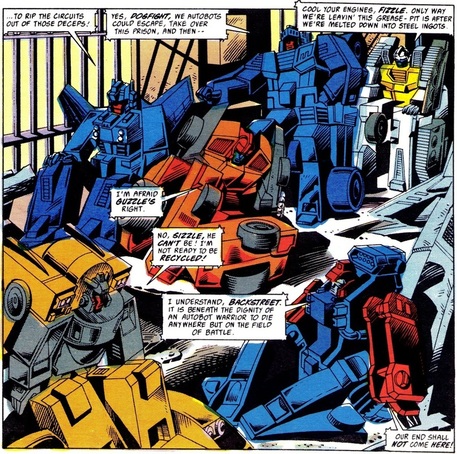 Note how Delbo clearly has no idea how to make Guzzle's toy based art sit down.
The Z Foundation itself—and its representatives Mr. L; Mr. K; Mr. B and their big and hidden in shadow boss Mr Z—will actually turn out to be more interesting than the RAAT/III retread they at first appear, but that’s something to discuss next week. Though I don’t think it’s too taxing a challenge to work out who Mr Z might be.

Back on Cybertron Bob feels on firmer ground, even if we get one of the more forced toy adverts the book has done in a while. The Americans are finally getting to meet the Sparkler Mini-Bots, whose vehicular modes couldn’t save them from being captured and thrown in a Decepticon prison. They wind up in a cell with the sadly not famous for anything Triggerbots, which is fine in and of itself but (in a recurring problem) the issue only actually has something for three Autobots to do rather than six, meaning half the characters get left behind when everyone goes to Earth. Bob does at least shake things up a little by having it being a mixture of the two teams picked for the Earth mission, with Fizzle, Sizzle and Backstreet getting to go whist Guzzle and Those Two Guys have to kick their heels.

Incidentally, the Triggerbots are only notable for just how forgettable they are. Neither Furman nor Budiansky will ever manage anything interesting with them despite both constantly trying. Indeed, we’re going to wind up with about four stories (two from each author) that feel as if they’re intended to be the new toy introductory story for the team, suggesting even the writers kept forgetting about them. Considering Bob’s next attempt to make us care is only four weeks away you have to wonder why he didn’t just make it the Sparklers here and leave the second chapter of Underbase for the Triggerbots to try and shine.

Despite this, the dark and foreboding tone of this—very much influenced by The Return to Cybertron arc—sequence raises it above the rest of the issue. The six Autobots rammed into a tiny cell and at the mercy of their cruel Firecon guards have an almost resigned attitude to their impending death. Despite the briefness of their appearance, the Firecons actually put in a good showing as the bored tyrants who would love to slag their prisoners but annoyingly have to send them to Earth for mysterious reasons (well, mysterious if you haven’t worked out who Mr Z is). This rather neatly and unintentionally keeps the Firecon/Sparkler Mini-Bot rivalry alive, even if it is the last time we’ll get to see it.

On Earth we get some rather poorly changed dialogue clarifying that the Sparkler Mini-Bots have been there before (the changes to the Action Force backup are also poorly done this week, it looks like the letterer had been on the gin), before the Road-Jammers—yes the Z Foundation are really keen on branding and have given them a blatant super villain team name—turn up and prepare to attack. How they knew the Autobots would be there is one of the mysteries the issue closes on. Well, rather it’s a mystery if you haven’t worked out who Mr Z is yet. 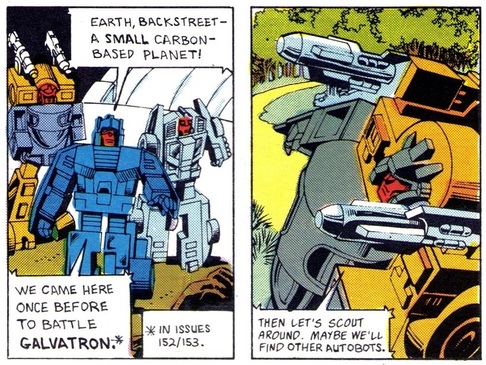 The panels with changed dialogue.
The midpoint cliff-hanger is an odd one though, as Sizzle (driving in his vehicular mode! Hurrah!) is attacked by... (quickly flicks back to start of the issue to check which one it is)...Roadhog and uses his flame exhaust on the human in self-defence. Whilst actually trying to burn a human to death is nice and hardcore, it does leave the main “tune in next week” tension point as “Will the horrible villain survive?”

Sadly this isn’t a great opening, feeling less like a nostalgic run through old favourite tropes (as it was presumably intended) and more the sign of a very tired author. The Road-Jammers are an incredibly uninteresting bunch and hardly worth the time invested in them, leaving the brief Cybertron sequence as the sole highlight of the issue. After a mercifully humancentric couple of weeks, Delbo is forced to draw multiple Transformers once more, and the resulting heavily toy based art for the new characters does them few favours. The Firecons in particular look less like demonic monsters as they did in the British stories and more like bricks with legs.

Transformation continues to be excited about the launch of Death’s Head, promoting yet another signing at the Birmingham Nostalgia and Comics (were there no other comic shops in the UK at the time?) on the 19th November. What a pity I was obviously unaware of this considering I was only down the road and had often been to that store with my mother. Presumably, despite now being a seasoned reader of a whole nine issues, I was still completely unaware of who Simon Furman actually was, and of course I’d not have a clue who Death’s Head himself was either. There’s also a trade collecting some classic Captain Britain material which prompted a similar signing on the 26th of November. Said trade also becomes the first thing other than a regular comic to be featured in the Mighty Marvel Checklist. 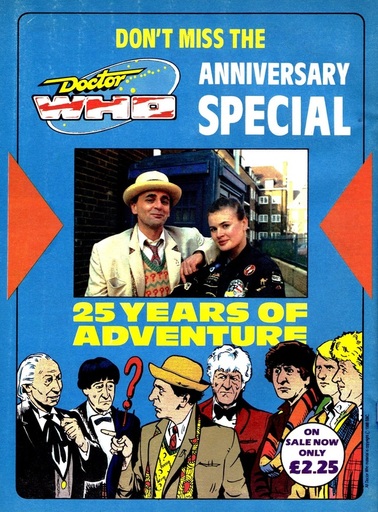 This is now older than An Unearthly Child was at the time.
Dreadwind finally gets to answer letters actually addressed to him, and in celebration coins the term “Humes” for readers which will become something of a catchphrase. Even with letters written with the new format in mind there’s no chance for Hi-Test to get a look in though, a sign the gimmick really isn’t going to take off. As well as promoting Time Wars and claiming Earth’s interstellar mail service is better than the terrestrial one, a letter from Stuart Craig of Fife becomes the first to mention the Double Targetmasters. What a time to be alive.

Action Force finally sees Snake Eyes unmasked and just to rub salt in Flint’s wounds the Baroness is much more excited to have this prisoner. The real joy though remains the Destro/Cobra Commander team up, which becomes a road trip as they escape from the Pit; steal some amusing clothing as a disguise and a car. As well as some fun from Cobra Commander mocking Destro’s normal 70’s look, his background as a used car salesman is explored for the first time and allows Hama to have some fun throwing barbs at that particular industry.

Combat Colin ends his battle against Aunty Arctic with her falling down a crevice and Steve being chased by Mrs Frumpy for outstanding rent. This story has been unusually weak for Stringer, feeling rather like a stream of ideas he put down on paper as they occurred to him but couldn’t quite make work as a whole.

The other thing of note is a full page advert for the 25th anniversary issue of Doctor Who Magazine, which draws special attention to the comic strip that would become the beginning of a long and fruitful relationship between that book and Lee Sullivan; a gig he got thanks to his successful Richard Branson likeness on Salvage! Ironically though he’ll go on to be known as the definitive Dalek artist rather than for his ability to capture faces.

Next week, it’s not a case of Z for Zachariah but Z for... well you’ll have to wait and see. 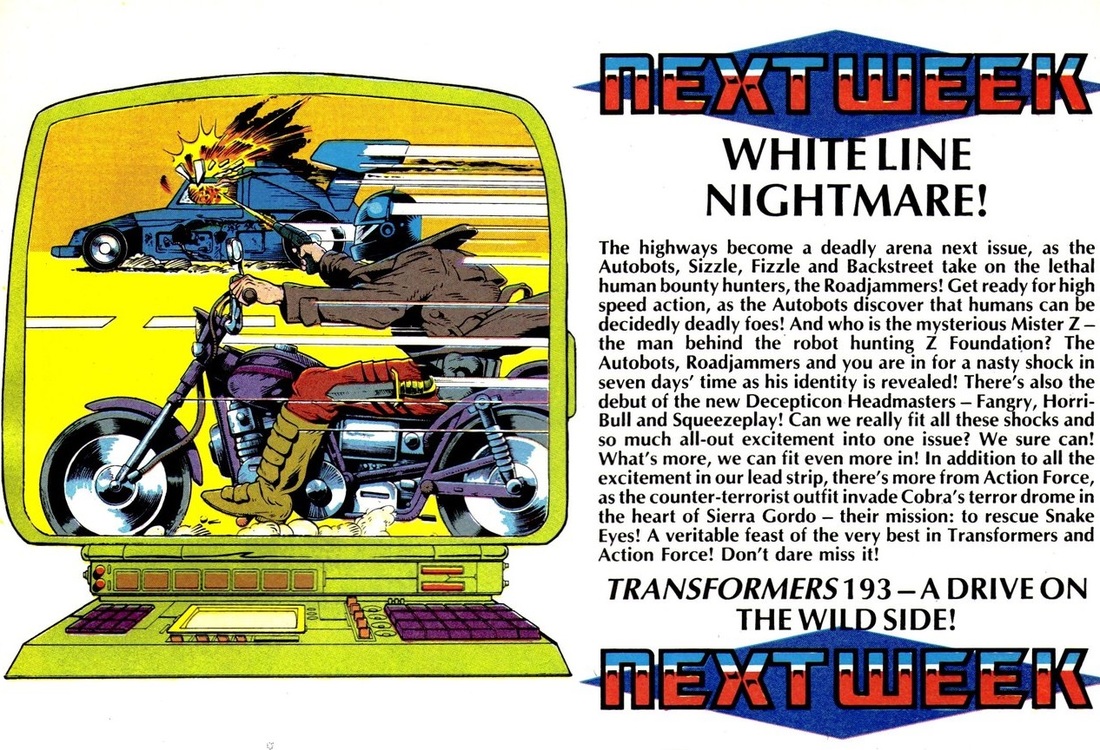