Whatever Happened to my Part? 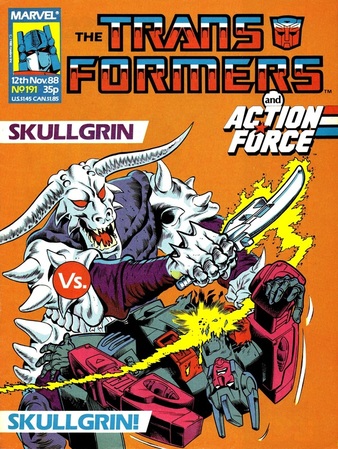 We want Skully-Baby to look be-yoo-tee-ful or his adoring public!

The most important thing to note about this issue going in is that the cover is a complete and utter lie. “Skullgrin Vs. Skullgrin!” it screams, accompanied by an Art Wetherell drawing of...well, Skullgrin fighting himself (or rather the inner robot battling the shell). The Mighty Marvel Checklist within the comic also promotes this fight as the centrepiece of the issue in the brief description given to it alongside the rest of the companies output this week.

However, this does not at any point actually happen in the issue. The closest we get is when a blast from Circuit Breaker knocks the shell’s arm into the robot. Was the cover commissioned by Furman before they actually saw the issue from an early/inaccurate synopsis and—when it was too late to change it to something more relevant—they just run with the Big Lie to try and justify it? It’s almost a pity this doesn’t happen; partly because the idea of a Pretender fighting himself is quite fun (and I don’t think will ever be done) and partly because it’s easy to imagine the sequence where this is entirely staged for a scene in the film as a wry commentary on the artificiality of cinema.

This would actually be better than what we do get. I said last week I was expecting this second half to kick into gear now it has reached the actual plot. And to start with it does, the scenes of Skullgrin being pampered by makeup (“Powder, please. We have a shiny spot on this horn”) and feted by his director whilst the ostensive male lead fumes are all rather sweet and funny. As is the press conference where questions about him eating live animals and murdering people have the same effect a Clive Anderson barb did on the Bee Gees.

His tantrum is calmed down by his female co-star Carissa Carr (real name: Ethel Stankiewics), who effectively provides us with the “heart” of this issue as she develops the sort of relationship with Skullgrin that—from a British perspective—feels not unlike a more receptive Sludge/Joy Meadows retread, with one of the reporters even helpfully pointing out it’s a Beauty and the Beast story. 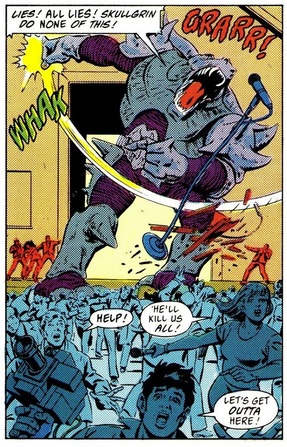 "You're the tosser mate"
What is worth mentioning is that this is pretty much unique in Budiansky’s run as a story about a sympathetic Decepticon. Skullgrin is a happy actor with no hidden agenda or sneaky plans (he’s even been entirely upfront with Scorponok about how he’s getting the fuel) and only acts aggressively in self-defence. This is the sort of story that would normally be given to an Autobot by Bob (think Skids), and it presumably only wound up a villainous piece because it needed a monster Pretender shell rather than a human one. Even if that were a mitigating factor, this is—along with Flywheels from Furman earlier in the year—a key step in the Decepticons being more rounded characters rather than just (albeit often fun) bastards.

Carissa also attempting to be nice to what she believes is a disabled Skullgrin fan by letting slip they’ll be filming at the Grand Canyon (which seems unlikely for a B movie considering they wouldn’t give permission for Independence Day to do first unit filming there a decade later. Perhaps Skullgrin wrecking the place here instigated a policy change?) is an unusually thoughtful scene for a Budiansky issue as well. As the fan is really (the actually completely naked under her coat this time as her sellotape only gets added when she presses a button) Josie Beller there’s a parallel with celebrity stalkers being made here. In particular the way her gushing turns to psychotic violence means the spectre of Mark Chapman haunts the story in a way that gives it a surprisingly hard edge for what is basically fluff.

Even the initial Grand Canyon sequence with Skullgrin and Ethel bonding how they have to “Pretend” to be things they’re not (the implication Ethel adopted a stage name to hide Jewish heritage is another unexpectedly serious moment) in order to succeed in Hollywood is remarkably good and—again—shows the Decepticon in a good light. You very much get the feeling he’s a bit dim and likes a fight but is otherwise a decent sort of fellow who would probably have been just as happy in the Autobots as long as he’d had the chance to keep hitting things, but the cards just didn’t fall that way. 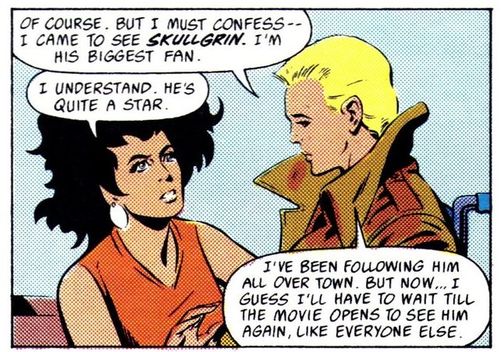 "I've got an album for him to sign..."
And then things go horribly wrong. Skullgrin exits his shell and once his watching number one fan confirms he’s a Transformer (which is actually odd as he doesn’t look very much like any Transformer she’s ever met and what she’s seeing could just as easily be a movie effect) she stages a rather boring and uninteresting fight. Skullgrin originally assuming Ethel betrayed him and being prepared to let her fall to her death before Josie assures him this wasn’t the case because she only wants robots to die is almost an interesting moment...until you remember how myopic Circuit Breaker is about this and that she hates all human allies of the machines as well.

The Hollywood satire also becomes as heavy as a brick here with Friendly not even managing one dimension as he insists filming carries on through the fight; demands the actors place themselves in danger for the shot; is prepared to watch his leading lady die with glee and even offers an almost entirely naked woman money if she’ll kill the “Bigfoot” his entire movie is based around even though they’ve not finished filming yet. Because he’s a Hollywood director and they’re all dicks? Am I right? It’s shallow and unfunny and rather kills the mood of the whole piece.

It also ends rather suddenly with Circuit Breaker telling Friendly to piss-off and destroying his camera because she may hate all robots irrationally but she hates Hollywood directors even more because they’re all dicks. This leaves no resolution to the Skullgrin plot at all. Does he carry on acting because of his new friend (and the humans will still be under contract because that’s how they work in evil Hollywood; the director can try and kill you and you have no recourse) and the convenience of the fuel arrangement? Is he so ticked off at Friendly wanting him to die he kills and eats him? To call in an unsatisfying denouement would be a massive understatement. It’s rather a shame as without it this issue would be huge fun with some nice understated serious moments. 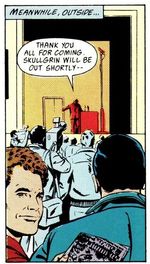 The altered cover. Wiki correction needed!
Despite the story falling apart at the end, Jose Delbo continues to knock out his best (again, thanks to the almost complete lack of robots) art to date. One thing to note is that in the original issue one of the reporters is reading the Marvel Universe book, the UK (presumably because we’re still treating Transformers as part of Marvel continuity) has rather poorly changed this to a grainy and hard to make out shrinking of the American cover to The Big Broadcast of 2006. The Wiki claims it’s the American cover to Monstercon From Mars! itself, presumably because all you can really make out is the raised arm which Circuit Breaker also provides on that cover. However, it is Rodimus’ arm, with the rocks around it being the dead giveaway.

The bulk of Transformation is given over to desperately making readers excited for the return of Action Force whilst Visionaries is taking a “Rest”. It doesn’t work. Between that and the one part of the sidebar promoting the Death’s Head comic that leaves no more than a paragraph to mention the main strip. Though it at least is accurate in its plot synopsis. 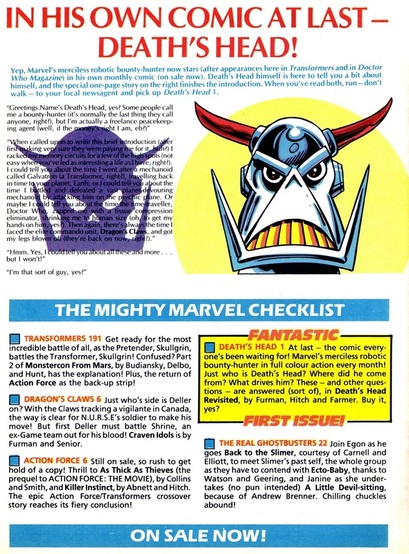 The promotion for Death's Head... along with the inaccurate description of this issue.
Dreadwind continues to dredge through Grimlock’s rejected letters whilst he waits for the postal strike to end, and unsurprisingly doesn’t come up with much of interest. He does however assure Robey Jenkins of Llandevaud that the stubbies (who Robey met at Nostalgia and Comics, and liked) really are as dumb as claimed. He also gives Jack Chivers of Ifield the comic’s first foreshadowing of The Other big story coming up by revealing Starscream will be back in issue 194.

Action Force returns with Unmaskings, picking up where we left off. The comic itself makes a fuss over the mystery of the Fake Flint (here Dr. Mindbender finally notices his face looks just like a rubber mask), but the real joy comes from Cobra Commander and Destro trying to dig themselves out of the collapsed Pit. The former is petulant and childish whilst Destro is just effortlessly cool and comes up with the solution of how to get them out of there (it turns out Action Force have borrowed The Mole from International Rescue, meaning they can drill an escape tunnel) without breaking a sweat.

Breaking a sweat is also something Steve’s landlady—named Mrs. Frumpy—doesn’t doe in Combat Colin as she uses her skills from her Royal Ballet days to confuse and destroy a giant robot penguin Aunty Arctic has set upon them. As you do.

The big news though is that, as mentioned, Death’s Head finally has his own comic. Not only does it get a full page advert, the bulk of the Mighty Marvel Checklist is given over to it. The Addendum linked to below looks as his solo series in more depth, but suffice to say this big PR push will do little to help.

The Christmas Quiz is now over; results and the winner can be found on clicking on the comment link below.

But first, read the Addendum, yes? 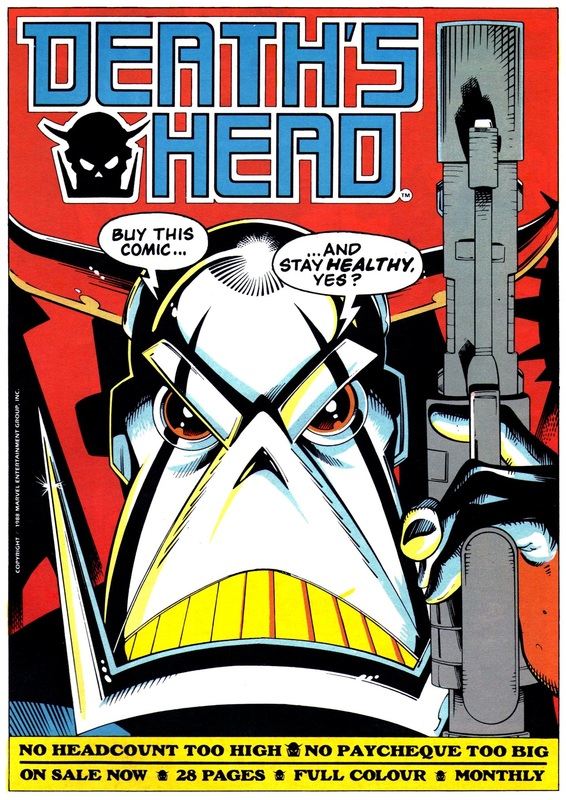