Cast People In Your Plays Like the Chap From Songs of Praise. 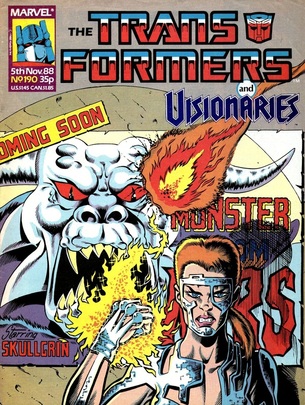 I’m sorry Sir. This National-Guard unit has orders to secure this area. Nothing about chickens.

We’ve had rock music. We’ve had computer games. Now it’s the turn of Hollywood movies to come under the glaze of Bob Budiansky’s satirical eye. This is actually one of the key differences between him and Furman—the British author has a fondness for genre spoofs whilst Uncle Bob enjoys taking the form of entertainment itself and putting it through the ringer. It’s mildly surprising it has taken him this long to do movies (especially considering the cartoon did it three years earlier), but now he has reached that point he only needs to tick off wrestling from his list of Things That Were Popular With Kids At The Time and he’ll finally be allowed to retire from the book.

What surprised me about reading this half of the original issue is how long it takes to reach the stuff everyone remembers about it. This is very much in the vein of Buster Witwicky and the Carwash of Doom!, a story that leaves the regular format of the series even more than Bob’s usual light-hearted stories for the sake of an out and out comedy with minimal Transformer involvement. And if you were to ask anyone who has read it what Monstercon From Mars! was actually about the response would be “lots of silliness with Skullgrin becoming a celebrity”.

But Skullgrin only shows up on page 8 out of 11. Before that there’s only the most token of Cybertronian presence as Sky Lynx returns the three human children to Earth, gets a hostile reception from a mob (understandably, these kids have been kidnapped for over a year!) and then buggers off again. 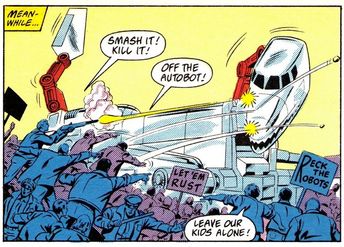 "WE DIDN'T WANT THE CHILDREN BACK!"
Out of the various dangling threads left over from Budiansky’s previous stories—the up in the air status of the Autobot leadership now there’s three contenders for the role and them all being stuck on the moon being the main ones—those bloody children are by far and away the least essential to catch up on, and indeed could have been quite easily ignored as those will be. Assuming there wasn’t some editorial mandate to show no harm had come to minors, this scene really only serves the purpose of reintroducing Circuit Breaker after a very lengthy absence as she watches Sky Lynx from her Scooby Doo style camper van.

That said, Sky Lynx being a media whore—insisting he doesn’t have time for a press interview whilst at the same time pointing out his best side for the cameras—is genuinely very funny and at least the bastard children only briefly speak.

The real puzzle though is why bring Circuit Breaker back at all, nearly two years after a final appearance that generally wrapped up her arc pretty well despite her final scene in Decepticon Graffiti! turning the whole thing into a shaggy dog story with its “I may have just learnt to work with and respect some robots but now they’ve lost me a pay check I’m going to go back to hating them!” conclusion. Certainly nothing in this first half screams that her presence is essential, and the fact she’s decides to follow Skullgrin about despite him not looking like a giant robot does make you wonder why she hasn’t applied the same due diligence to the more quantifiable alien robot activity in the last two years. At the very least the months Galvatron and Magnus spent trapped in lava would have given her two stationary and hard to miss targets. 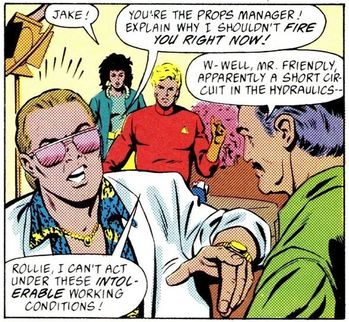 A director so '80's it hurts on a set that's very 1940's.
The meat of this first half isn’t a Transformers story at all though. It’s a wacky Hollywood sitcom about cheapskate director (and also owner of the studio, presumably he’s supposed to be a Roger Corman spoof) Rollie Friendly and the stress caused to both him and his G.B. Blackrock lookalike accountant when the monster prop from his new film explodes. It’s standard stuff, but does have a certain charm. I especially like leading man Jake Colton, an arrogant prima donna  visibly based on Sam Jones as Flash Gordon (well, considering the look of the film suggests either Budiansky or Delbo haven’t seen a movie made after 1950 it’s probably supposed to be Buster Crabbe, but it works better as a send up of Jones’ behind the scenes behaviour so I’ll give it the benefit of the doubt), who goes from insulting his co-star credentials to weeping as he hides behind a truck in fear of “Bigfoot” in a most entertaining way.

It’s all very slight though, and it’s rather a relief when the cover star finally appears as Friendly decides to drum up some promotion for his film whilst shooting is shut down to fix the robot by taking the actors on a Bigfoot hunt. This turns the issue into a Deliverance spoof as he has to pay-off the local hicks to get one to take him to the area of forest destroyed by the recently active beast.

This leads to my favourite gag of the whole issue—and one I’ve seen come in for a lot of unfair stick over the years—as Skullgrin appears and, as you’d expect from such a one dimensional cipher, Friendly decides to offer him a job on his film. The result being Skullgrin remembering being sent on his mission to find fuel by Scorponok, who declares that in his Pretender shell Skullgrin will have an easier time blending in unnoticed on Earth.

The complaint made about this is that it’s very silly and unrealistic. But frankly I think it’s genuinely hilarious and clearly not meant to be taken seriously as an indicator of Scorponok’s sanity in a blatant comedy issue. It’s rather a pretty neat Meta commentary from Budiansky on the essentially rubbish nature of the Pretender shells. Which have after all already forced him to try and pretend a 30 foot tall human is a convincing disguise. With the rest of the humour being very much on the nose, the fact this works on more than one level and is rather biting the hand that feeds on Bob’s part is very welcome.

Come on, this is genius.
Another good gag is Skullgrin actually thinking through Scorponok’s “Get fuel” order (which up to now has involved stomping through trees and scaring chickens) and deciding there’s no reason not to do this legally. It’s a standard gag that most super-villains would make more cash putting their genus into legitimate work, so having a particularly dumb one manage to realise this and enter a contract of gainful employment is delightful, mainly because in doing so he does more for human/Transformer relations than any Autobot ever has.

Friendly convincing the National Guard that being a giant monster isn’t actually a crime in and of itself and therefore being allowed to take Skullgrin with him (under exclusive contract no less, the signed “SKULL” being a good visual gag) is a nicely played light moment as well.

Unfortunately this means the issue ends at the point the story actually kicks-off: With Skullgrin managing to be a massive celebrity (even making the front of Time!) as the promotion for the Monster From Mars movie he’s making launches. His signing a massive autograph makes for another lovely visual on which to end the issue, “Great stuff Skully-Baby” indeed.

I expect the second, more Skullgrin focused, half is going to be a lot more fun, but overall this is a slight but harmless comedy issue with some great moments near the end. Delbo’s art is also greatly helped by the absence of traditional looking Transformers and he’s clearly having a blast with some of the gags as well. 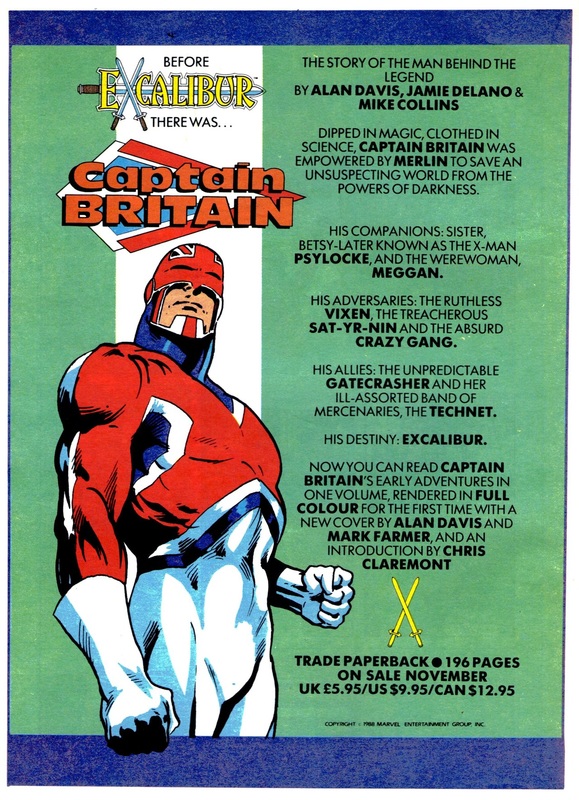 It'll be a while before collecting old comics becomes standard, but Marvel were just starting to make inroads in the field.
Transformation seems more than slightly insincere in its claim that this issue’s story is “No less vital” than last week’s, and indeed throws in an incredulous “Honest!” when describing the plot.  Under the heading of Lack of Visionaries! the sidebar (which of course hasn’t been on the side since the redesign, but I’m not sure what the correct term is. Lowbar?) has to break the news that the backup strip is ending in the middle of an ongoing story. As an attempt to placate readers and avoid an Inhumanoids style filling of the mailbag, it claims the Knights will be back soon. This is technically correct, but only as one of an insane number of reprints of the original first issue of the comic, as the American title was cancelled at this point we’ll never know how the quest for the Talismans will play out.

The final part itself sees Arzon cure Virulina’s plague and—presumably—pull a bird. Virulina does get some barbed comments about how she’s not just there for decoration as all the men thought that suggests writer Gerry Conway was annoyed as I am at some of the sexism that made a part of these “Boys toys” franchises. The final paragraph feels as if someone knew cancellation was coming as we’re breathlessly told the other jewels “must” have been collected by now, leaving the mystery of what Merklyn wanted them for unresolved. Though not as fun as the cartoon, this has been one of the more solid backup strips and it’s a shame it was brought to such a premature end.

Dreadwind is still receiving letters for Grimlock, with it turning out a postal strike means there will be at least another week of this. Presumably these are therefore older letters not considered good enough to print the first time round. This might explain how odd some of the responses are. Most notably a list of questions from Paul Guymer of Bath only elicits a “ZZZZZZZZZZZZZZZZZZZ” because one of them is about Transformers sleeping. Two readers—Mark Clapham (another future Doctor Who spinoff author?) of Harrogate and Patsy Zuckav from Rockville MD USA—also offer to organise polls, which is only met with complete sarcasm. But then, the American wants to do a poll of the best Grimgrams moments...

AtoZ covers Kickback and Laserbeak, whilst Combat Colin deals with the ticket giving underwater police by getting Steve’s landlord to use her feminine charms on them. They run screaming.

Happy New Year! This has wound up going up a day later than usual due to be being deeply ill on New Year’s Day (sadly not even hungover, just lethargic and unable to get out of bed), but I figure one late entry in nearly four years is pretty good going. That means there’s less than a week left for THE QUIZ, which you should all enter if you haven’t already.

Next week, it’s the kingdom of the crystal Skullgrin! 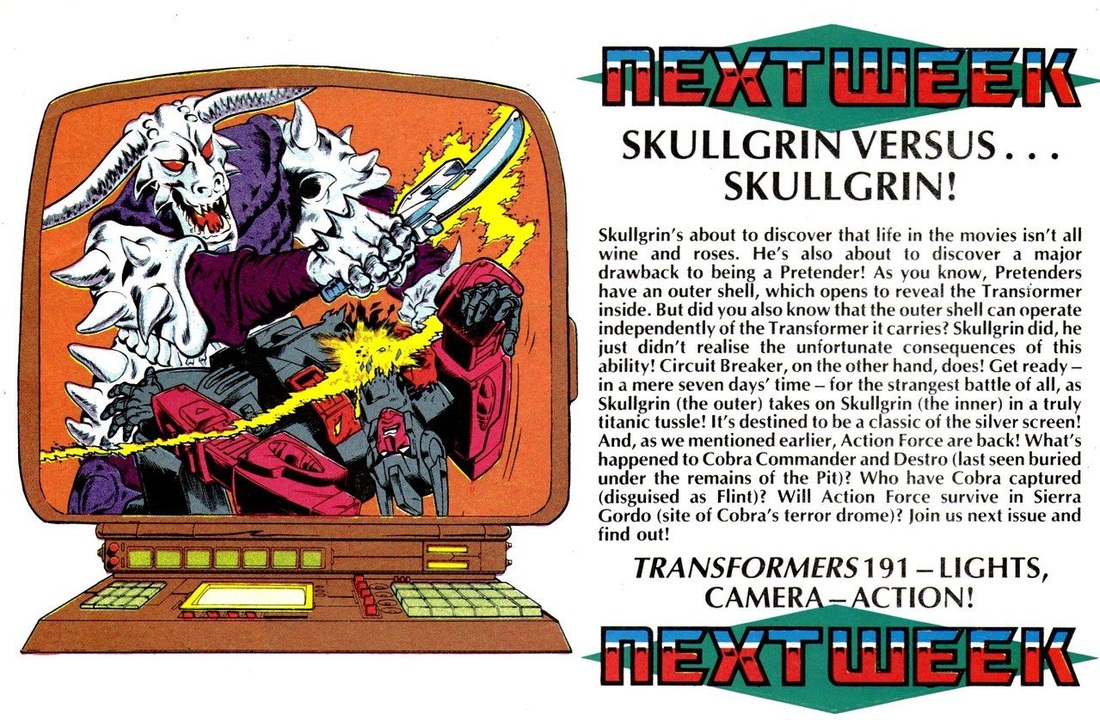