I Told You Once, I Won't Tell You Twice. 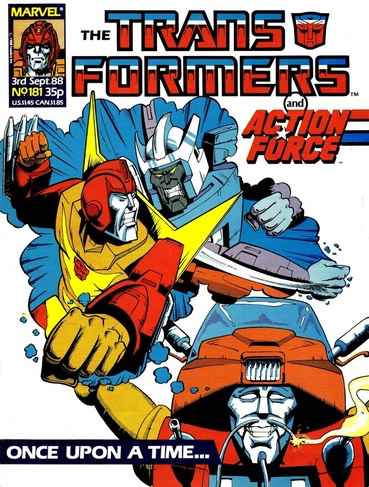 
Let’s start with what is comfortably the Most Interesting thing about the second half of this story: The End. As with Last week there’s a special one page bookend—though as there’s no separate UK credits this time it feels more of a piece with what precedes it—attempting to make it fit into continuity.

The comic itself has made (often pleading) attempts to make this seem like a key moment, but that’s not what actually makes this interesting other than showing exactly how annoying Furman found the source material. Yes, it turns out the Quintessons are the ones who hired the interrogator and actually are interested in the canister that is the only real aspect of the story Wreck-Gar is telling.

The Quintesson (who may actually be an important one for the next epic, but it’s hard to tell) may be interested in the canister, but after the interrogator is rather smug about the confession he’s extracted ol’five face feels compelled to put the boot in. This goes beyond simply pointing out the tale doesn’t fit into established facts. “Wreck-Gar’s whole account is full of absurdities and contradictions, not to mention lies!” Note the “lies”, the actual reason for the entire framing device, comes last on the Quintesson’s list of complaints. Whilst this is funny and would have flown over the heads of readers not familiar with the back-story, it’s worth trying to imagine how Furman might have felt if the American comic had reprinted Second Generation! with a “Blimey that was crap” afterword, even if he’d agree with the sentiment.

The interesting bit however comes right at the end, when Wreck-Gar (who for reasons best known to Lee Sullivan has his moustache constantly on fire in both these pages) closes out the issue with the quote I opened this piece with as the interrogator is executed for being innocent.

"Mountaineering rope. It would hold an elephant" "I must remember that the next time I go climbing with one"
Furman was inspired when it came to this framing device by The Prisoner episode The Girl Who Was Death. This episode was notable in that, for people who didn’t remember the ‘60’s, it would have been the first episode of the series they’d have seen when it was repeated as part of a best of ITV season earlier in the ‘80’s (before Chanel 4 launched shortly afterwards and repeated the entire series). This was an insane choice as it’s completely unrepresentative of the show, as Number 6 tells a completely made up story to some children so as to confuse and belittle his listening captors (do you see how Furman was inspired there?). Notably it comes second on the list of British television episodes where the budget clearly went on massive piles of cocaine, with the very last episode in the number one spot of course.

As the episode closes with Number Six delivering the old Watch With Mother catchphrase Furman does the same here, with Sullivan being enough of a fanboy to make the connection and add the shadow of a penny farthing so as to make the homage obvious. Well, as obvious as paying homage to a twenty year old episode of television most of the target audience wouldn’t have seen can be anyway. It’s a cute and—in the days before home media releases of old TV had really gone mainstream and repeats were rare so even parents looking over their children’s shoulders might not spot this one—subtle gag.

I also wonder if Furman was aware of the behind the scenes problems on that episode—it was an old Danger Man script dusted off when they were desperate for material that had various outside constraints working against it (Number 6 dons a ridiculous disguise at one point to hide the fact that McGoohan was still off in the States filming Ice Station Zebra)—and this reference is designed to work on more than one level. Either way though, this one panel is the only part of the entire two issues to feel as if it has any heart in it.

It may also be worth noting this is one of two Prisoner nods we’ll be getting in the comic, though the later Combat Colin one will play with the more obvious iconography of the series.

As for the story itself, there remains very little to say here as it goes through the motions of adapting the rest of the episode with little in the way of thought or effort, with the narration continuing to not really work as a supposed first person story told by Wreck-Gar. Though this time the UK team do add one new panel to the very end of the story to try and make the transition to the new page smoother. 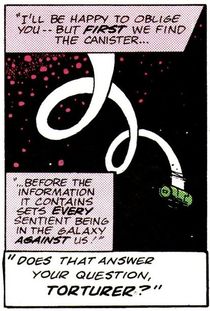 The US panel altered by the UK team.
The only real thing of note is that Alan Kupperberg is clearly struggling to understand the script he’s been given. A confrontation between Galvatron and Rodimus suddenly turns into one between Prime and Cyclonus; Rodimus is buried on one page, free on the next and buried again on the following; Omega Supreme provides mass transportation in robot mode rather than spaceship and Galvatron turns into Soundwave as the Decepticons retreat. And those are just the obvious ones.

The tradition at the time with American comics is that the script gives a rough description of the action, the artist draws it and then the dialogue is added afterwards. However, Big Broadcast is adapted from a story that already had a full script; I wonder if this wound up confusing someone along the line. Or it’s possible Ralph Macchio’s adapted script was just that bad. Considering he seems to be the default person to write Transformers when Budiansky isn’t available, we should be thankful he never got the gig full time when Uncle Bob left.

With the lead comic so poor it’s down to the rest of the issue to try and provide some interest. Transformation is once again desperate to the point of ruining the ending as it tries to reassure readers this all makes sense, with the second half of the sidebar (beneath promotion for a competition next week) even pleading for people not to write in. To be honest this does seem rather patronising to readers at this stage, especially considering the subtly of The Prisoner gag.

Speaking of spoiling the ending, Grimlock totally blows the surprise conclusion to the next story (no, not the ventriloquism) when answering Conner O’Neil of Dublin’s question on if Metroplex will be in the comic. He also very carefully doesn’t flat out say Powemaster Prime isn’t actually in The Return of Optimus Prime when answering Mark Clampham of Harrogate’s query about whether this “First” appearance is set in the past or the future. 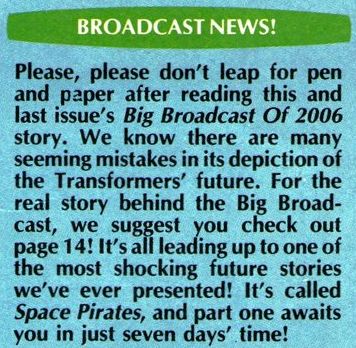 "Please!"
Grimlock is more helpful to John Swinney of Rowlands when explaining why the Collected Comics don’t reprint the entire series. Apparently they only pick the best old adventures, so make of that what you will when it comes to the American stories John specifically asks about.  However, overall this is a rather disappointing penultimate Grimgrams.

Action Force concludes Launch Base with the shock reveal Flint has really been back at base all along. Amusingly Snake Eyes winds up having a far worse time of it than the real Flint would have as Dr Mindbender presents him with the brainwave scanner that has caused him such trouble in the past.
What’s more interesting here though is that Action Force is taking a break on the unexciting cliff-hanger of Destro standing in the rain. Next week will have some amusing filler so that the big relaunch in 183 can present a brand new backup. Yes, another attempt to replicate the success of Transformers has failed and the refugee will be joining us in a fortnight.

Combat Colin goes in his summer holiday to Corfu in what is the first attempt to tie the strip into the time of year in which it’s published as Robo-Capers used to do. He and Steve take some samurai swords with them... because they’re the only things mighty enough to skewer the mighty Combat Kebab.
The other notable thing about the issue is we get our first, and slightly late this year, advert for the Annual. I do love that Scorponok cover, even if the promise of AtoZ’s on the Seacons isn’t the most exciting sales point.

This has comfortably been the shortest piece I’ve done in ages, but there really is that little to say about the issue, there are not even any amusing adverts this week. Where’s Peter Pez Clown Policeman IN SPACE when you need him?

Next week though, there will be lots to say as Furman launches his next epic with the last issue I definitely didn’t read at the time and attempts to make sense of Big Broadcast. Will it succeed? 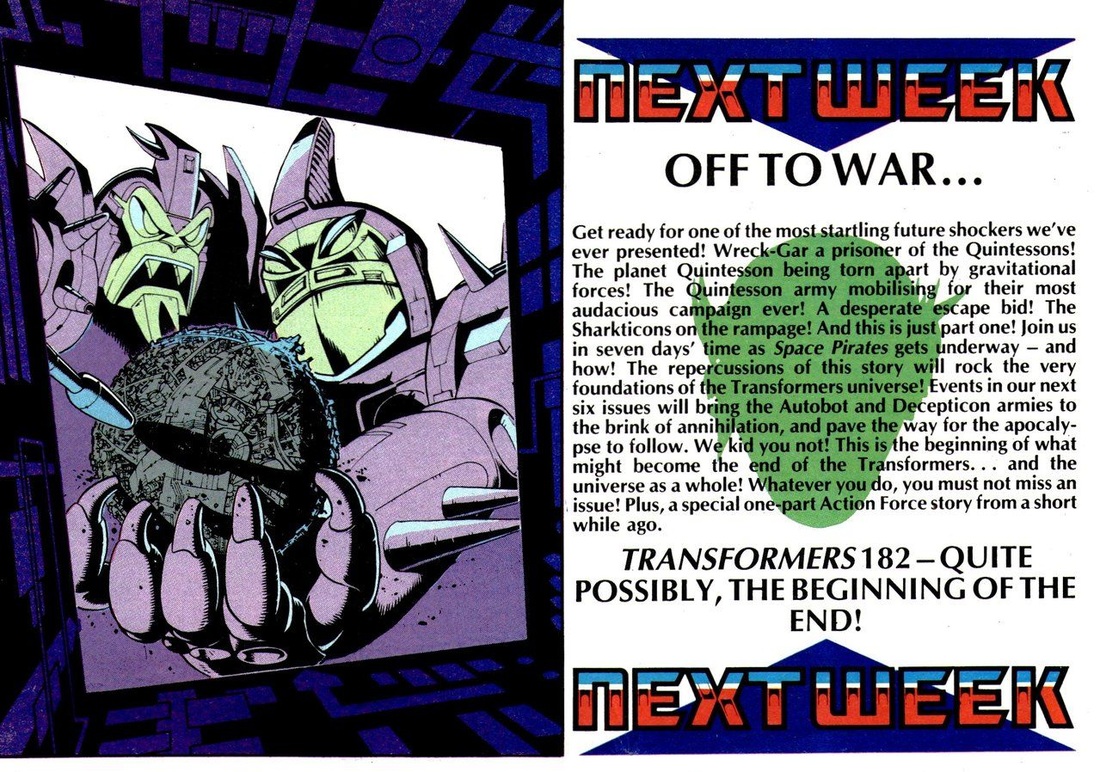