Spectacular, Spectacular. No Words in the Vernacular. 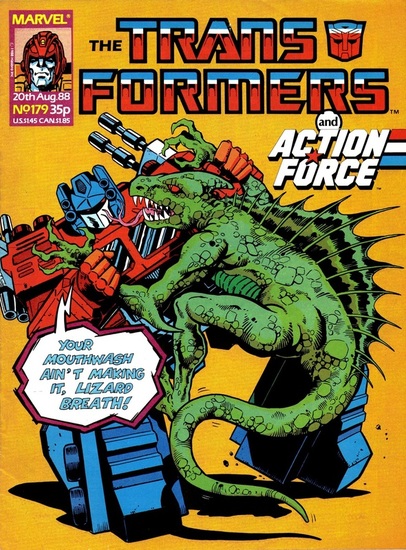 Now you know why I get the top billing!

So, including every Addendum, Annual and Collected Comics, this is the 200th entry in this series. So whilst I randomly attack my future friends for no reason other than padding, what better way is there to celebrate than a trip to the SPACE circus?

The second half kicks off with Sky Lynx giving us the explanation we've all been waiting for with baited breath: What did happen to those kids? Now, considering their last experience on a space shuttle ended in disaster and that they'd just escaped from certain death you think the four children (and bear) would be traumatised and desperate to go home after Sky Lynx rescued them from Grimlock.

You'd think that yes, but instead we get another sign of how they're clearly mentally ill as they're actually having a gay old time (Sky Lynx enjoying their company because it makes a change from war makes more sense) and badger him into taking them to the Cosmic Carnival when the advert buzzes them. Because what could possibly go wrong?

What follows actually makes me feel some sympathy for Mr. Big Top. Sky Lynx doesn’t bother to take any sort of currency to the Carnival (and it’s a mild shame that when Berko lists the currencies he could use the UK team didn’t replace one with Shanix), but somehow still expected to get in. He then turns out to be the sort of person who responds to those emails from Nigerian Prince’s asking for help with their money as he agrees to sign (sadly with an eye beam, it would have been fantastic to see him handling a pen with his claw) a contract he doesn’t bother to read allowing entry in return for becoming a performer. What a surprise it is to nobody else when he never quite seems to work off his debt and the kids are forced into slavery. 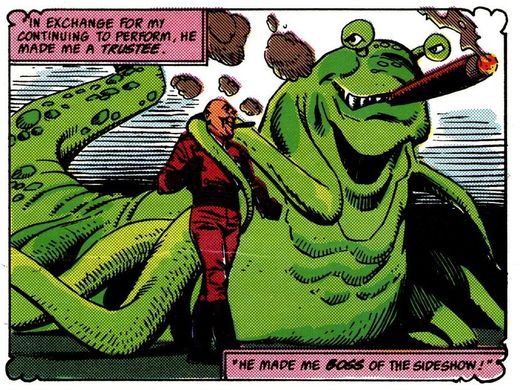 Just like me and my boss.
Amusingly Optimus, continuing his relaxed attitude to things in this story, isn’t especially bothered by any of this, probably thinking like I do that it’s all their own fault.  He does however manage to get Berko onside by the simple trick of just listening to the much put upon human. It turns out he was homeless when a spaceship kidnapped him (oddly this is probably the first appearance of classic UFO mythology in Transformers, it will not be the last) and the kids are actually filling his cage: As long as they stay he can be a trustee on the outside.

The reluctant bastard who turns out to have a tarnished heart of gold is a popular Budianksy trope, with Joey Slick and Donny Finkleberg having undergone similar (though in the cast of the later, longer) changes in the past, but here it’s a little more interesting as it’s providing some heart to an otherwise very silly story and the visual of Mr. Top and Berko walking along arm in tentacle smoking cigars is the second best image of the comic.

It also helps to reaffirm Optimus’ strength as a leader; by simply bothering to employ empathy and pay attention to those around him he successfully makes an ally of the one person who can help them. It’s a skill that has been sorely lacking from his various successors over the last twenty months and it helps to add to the feeling that it’s good to have him back.

I’ll let you decide if Prime telling the Space Hikers he’s off home because of duty is entirely to use reverse psychology on Berko or just because he really hates those kids.

As Berko will turn out to have a key to the humans’ cage, the issue could end here by him just opening it up and them scarpering. But that would be less fun, so for no readily apparent reason (it’s supposedly a cover for their escape, but as they just sit in Goldbug till the others come to rejoin them this seems pointless) Sky Lynx carries on with his next show as usual, but this time Optimus Prime joins in. 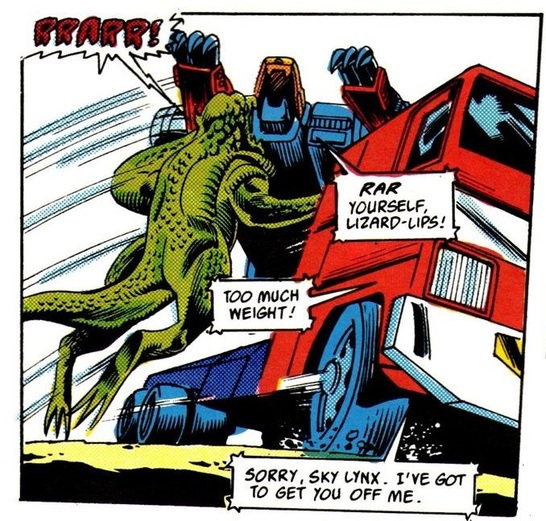 "Kiss me you fool"
I said last week that a Transformer transforming isn’t really the sort of thing that’s going to excite a regular reader of a Transformers comic, but here (and wisely from the point of view that this was originally in the same issue) we get the frankly amazing sight of a robot-bird-monster riding a truck whilst wrestling a lizard and playing chicken with a SPACE Hell’s Angel. Who delightfully self-proclaims himself to be “Rorza, the rocket-cycle racer from Rigel III!” before being confused by Optimus being the first being ever to dodge him.

This is Budiansky as his gleeful, camp best and anyone who isn’t left with a big silly grin on their face whilst reading it is probably clinically dead. The icing on the cake is Sky Lynx insisting Prime joining him in taking a bow after the end of the show.

All that remains to be done is for Mr. Top to receive an appropriately ironic fate. The art clearly shows Goldbug just smashing into Mr. Top so he tumbles into the cage formally occupied by the humans. Clearly however someone thought deliberately running an organic being down might be a bit much so the dialogue tries to convince you that Goldbug has been left woozy from a whack off Mr. Top and did it by accident.

Mr. Top is then left there for new visitors to the Carnival to gawp at. This might seem slightly cruel, but it’s not as if any of the Autobots present is completely dedicated to the idea that freedom is the right of all sentient beings.

That was just fun. It’s too frothy to ever be thought of as one of the greats, but it’s been a hugely entertaining two weeks and you can tell Uncle Bob cared more about this one from the simple fact the other Powermasters only appear to top and tail the story. Optimus (who may be a new toy, but is an old character and is drawn as such) is otherwise joined entirely by Autobots with a long history on the book the author actually likes rather than those he’s obliged to feature. There’s a sense here of “OK Hasbro, I gave you Powermasters and Pretenders, this one is for me”.

This is Frank Spinger’s last issue on art, marking the departure of the first person to draw Transformers. It’s something of a shame we never really got to see what he could do, the original miniseries is clearly a work in progress when it comes to character designs and the look of the franchise whilst Headmasters has a similar problem coupled with bad editing. Even this really doesn’t give us chance to see how he’d have handled a traditional Transformers story. However, the art is solid and matches the story with some nice bonkers imagery and if nothing else, it’s a memorable signoff.

For Charidie.
You get the feeling the editorial team isn’t as enamoured of the material as I am, as Transformation is one of those that feels slightly reluctant to mention the actual strip. Instead the long build up to issue 200 begins as we’re told that in anticipation of this a redesign is coming alongside a new backup--though Action Force fans are reassured this is only temporary--and a new “Future Shocker” (someone wants to work for Tharg) in Space Pirates!. Oddly it claims this “All begins in issue 183!”, when Space Pirates! actually starts in 182. Bad phraseology or were they still not sure how the framing of the next story was going to be handled at the point this was written?

Of course, this talk of a relaunch makes me realise we’re rapidly approaching the point I started reading the book. And, more worryingly, the point I’ll have to address the Arcee Problem. That’s going to be fun.

Transformation also explains that the “Full” Powermaster Prime is on Jerry Paris’ cover (with a wildly out of character Arnie style quip: “Your mouthwash ain’t making it, lizard breath!”) because “We thought you’d enjoy seeing him in his new form sometime in these two issues!” This is not only mildly sarcastic about the lead strip, but I also suspect the “You” in this case is the Hasbro UK executive who phoned up saying “What the hell? Why isn’t the new Optimus Prime in this story? SORT SOMETHING OUT”.

The sidebar is given over to promoting Sport Aid ’88, which basically seems to be a forerunner of the current Sport Relief, and encourages readers to take part in a global 10KM fun run.

On Grimgrams, David Milford of Ringwood congratulates Grimlock on having reached 100 issues as host as of 174, though Grimlock does point out that with “One or two issues that were (unforgivably) Grimgramsless” the anniversary was actually a little later than that. He also cryptically hints it might soon be time to pass on the mantle and ponders on the idea of bringing back the calendar. FORESHADOWING ahoy.

Action Force sees the start of the second part of Launch Base, and the beginning of one of the stupidest and most annoying examples of Hama’s “If you’re not a ninja, you’re a minga” philosophy.

Cobra are setting up a Terrodrome in Madeupfunnyforeignerland and Action Force decides they need a closer look at it. Hawk thinks Snake Eyes is the only person who could do this because he is a ninja, but if Cobra knew a ninja was after them they’d increase security tenfold (this ignores the fact Cobra know Action Force love a ninja and would presumably have anti-ninja security at all times, but hey...).

Hawk’s plan; and this spoils the rest of this arc as it won’t be revealed straight away but is so snot dribblingly stupid it needs to be spelt out now; isn’t to do something like sending Flint in instead because Flint is quite handy.

He sends Snake Eyes in. But disguised as Flint. Because Cobra apparently don’t give a toss about Flint and this will lull them into a false sense of no-ninja’s security. The fight between the new plane delivering “Flint” and the new Cobra jet is almost incidental to this, and the whole thing makes me want to find Larry Hama and ninja him.

Combat Colin perhaps tips slightly too far into moralising as Bigfoot (still with a sexy wife) delivers a lecture about how humans are destroying the environment. Luckily we get some fantastic faces and poses from Colin and Steve as they first try and leave before being told they’ll have to die to protect the forest.

Next week... well the Next Week box makes it clear we’re heading for a very odd conflict between the British and American stories, as it desperately tries to assure readers that there’s “More than meets the eye” to the cartoon adaptation we’re about to have inflicted upon us. This may not end well. 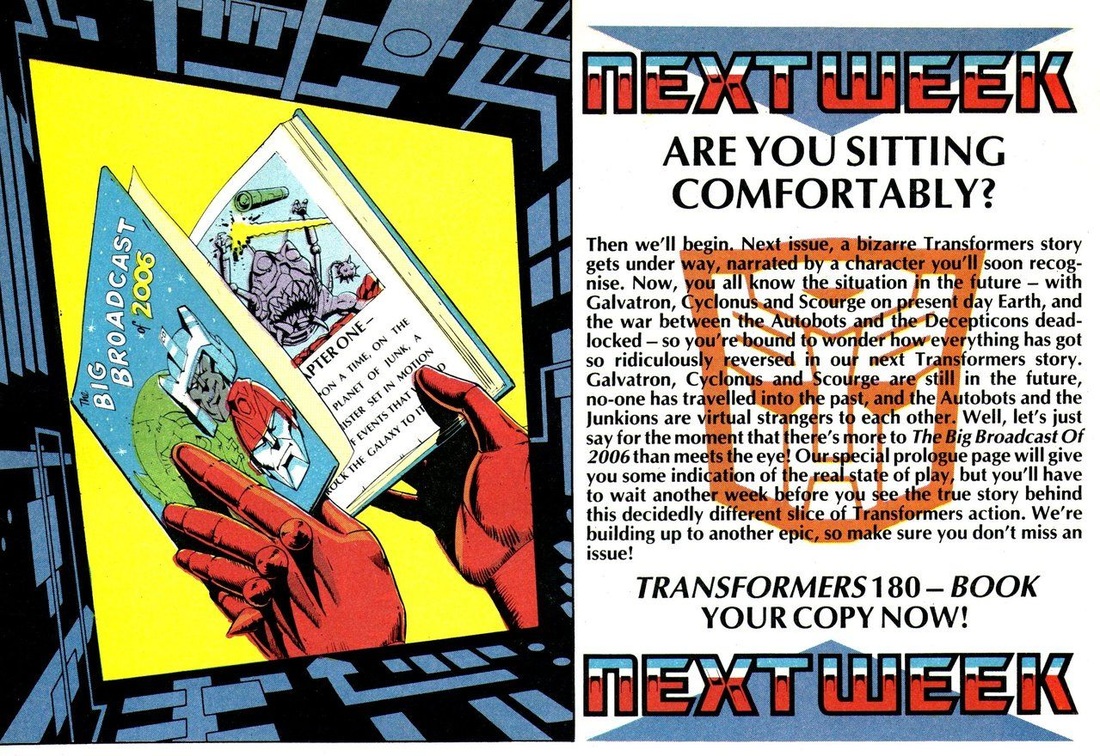