It's the Greatest Show in the Galaxy! The Galaxy! 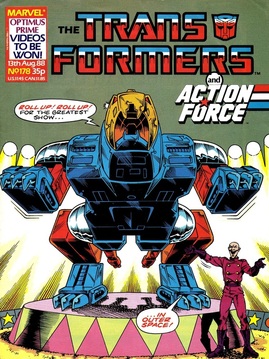 
It's fair to say that, even in the eyes of the man himself, Budiansky is regarded as having hit a rut at this point in the series. He was burnt out and more than ready for pastures new. It's surprising therefore that the run of Budiansky issues that ends with this story (fun fact: the following non-Bob American story was actually originally published before this one, but has been swapped by the UK team for reasons that will become apparent) is actually much more varied than he's usually given credit and all involve things he hasn't done before on the main book.

So we have an all action war epic set on the moon; a combination of food comedy and euthanasia discussion and here a SPACE circus. All set off Earth with minimum human involvement and few of his usual tropes. Not every idea is a success, but he's clearly trying much harder to keep things fresh and interesting (even if just out of desperation) than even he would give himself credit for. 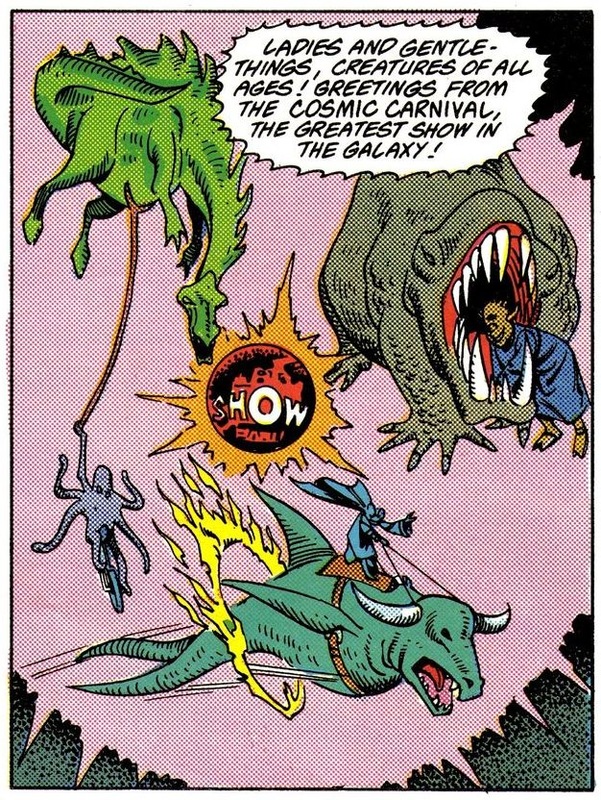 But where's the rapping ring master?
Of course, fresh ground for Bob doesn't mean fresh for genre fiction in general. Every science fiction/fantasy/horror franchise that runs long enough will do a sinister circus (or even just a clown) at some point. Transformers has dabbled with the imagery before, most notably in the cartoon episode Nightmare Planet, and later in 1988 Doctor Who will give us one of the all time best in The Greatest Show in the Galaxy (considering Marvel UK also publish Doctor Who Magazine it’s likely the way the cover tagline almost name checks this story was a deliberate joke, but more on that shortly). The basic requirements of such a story do however take Budiansky out of his comfort zone, what we get this week is more like Furman's more oddball 2000AD infused moments than anything else we've yet seen from him.

Things do however start off in a somewhat chunky fashion as we open on Optimus Prime (amusingly after making a fuss of his Powermaster body last week he'll spend this story in the smaller robot form, with Springer drawing it using Prime's original character model) explaining the entire history of Transformers to HiQ and the other Nebulons, complete with holograms.

Whilst bringing new readers up to speed is always a good thing, this is a strange time to do it as just about all the background information presented here isn't needed to follow the rest of the story, especially recapping Headmasters. It also makes it seem as if the Nebulons' decision to become Powermasters was hugely ill informed as they're only having the fact they've signed up for endless war explained to them now.

Things pick up though when Prime's show and tell is interrupted by that most terrible and evil of things: Junk mail. The way the advert for the Cosmic Carnival enters the Steelhaven is actually very like how the commercial for the Psychic Circus enters the Tardis in The Greatest Show in the Galaxy. A coincidence (it's unlikely Budiansky or Stephen Wyatt were aware of each other's work, especially as both were likely being created at around the same time) made even stranger by the Cosmic Carnival being called "The greatest show in the galaxy!". Repeatedly. All we need is for Joyride to go "Ace!" 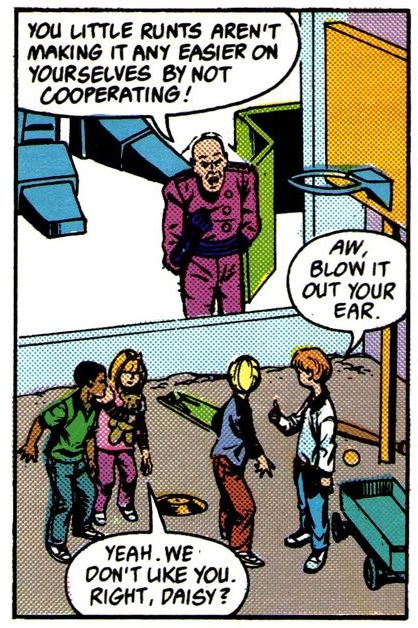 Take that Daisy you bitch.
Prime of course has more serious things to do than go to a SPACE circus, but when Goldbug spots Sky Lynx amidst the Carnival's attractions Optimus checks his Dangling Plot Thread Bingo card and realises "What did happen to those bloody kids?" predates "What has happened to everyone stuck on the moon?" and therefore requires his attention immediately.

Considering how lax Bob has been lately on following through on unfinished storylines and dealing with the aftermath of the moon battle is clearly the most important bit of unfinished business, devoting an entire issue to the relatively minor issue of Sky Lynx and the Space Hikers is an almost perverse decision. However, it does lead to some great stuff.

Actually seeing Transformers relax is something we've never seen the American stories do, and Furman has only really touched upon it with Macadams. So seeing Goldbug and Optimus walk around the carnival in a fairly nonchalant way (with the lovely gag of them only having enough spare energon to buy two tickets. Note how Prime instantly chose his actual mate to come with him rather than the living battery that the previous story established is essential to him not kneeling over and dying) is fresh and fun.

It's also the first time we get to see Optimus in a properly alien environment (allowing for the Nebulons being humans in funky clothes) and it's wonderful to see his laid back attitude when faced with the bizarre and unusual. No matter how threatening it tries to be all this is small potatoes compared to his day job and he completely refuses to get riled by it.

Indeed, Prime can't even get that angry when he sees the Space Hikers are exhibits in the freaks display, even with the implication that all the other creatures in cages might be sentient as well. These vile children (and Daisy. Sigh) were probably the nadir of last year's stories, so I must admit to taking a perverse delight in them being locked up and miserable. Especially when their handler Berko (another human, who will go on to be more important than he might seem now) shouts at them for not being entertaining enough in a very meta way. 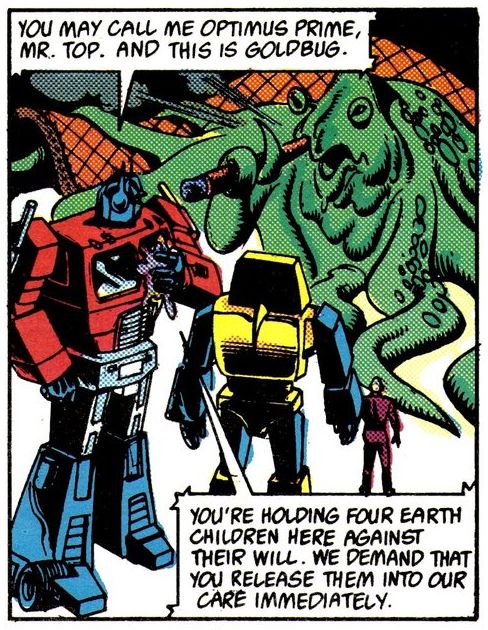 Top of the world ma.
This leads to my favourite scene of the issue as Prime, continuing to be reasonable and cheerful, decides to go have a nice chat with the owner of the Cosmic Carnival, Mr. Big Top. Big Top is a fantastic visual, being a big octopus style alien Del Boy, complete with cigar. There's some nice background detail about how the Transformers are viewed with some disdain by the rest of the galaxy, especially as Big Top comments on how few of them visit the Carnival and asks if "A few million years of civil war take all the fun outta you guys?” It's amusing, and rather damning on how this war has dragged their species down, to see Greatest Autobot of Them All Optimus Prime treated as just a pleb by an outsider.

The idea that Sky Lynx, who was rather a self satisfied character, has wound up signing a binding contract making him and the children work for the Carnival is rather fun as well, plus it also increases the sense of what small players Cybertronians are on the galactic stage.

Plus, Prime insists on being polite and calls Big Top "Mr. Top", which may well be the greatest moment in the history of all comics.

The following sequence of Prime and Goldbug watching Sky Lynx's show isn't quite on the same level. It's nicely drawn and Budiansky has great fun Big Top's ringmaster dialogue, but as impressive as it might be to the audience it's hard as a reader to be wowed by a Transformer transforming.

Still, as the issue ends with Prime and Goldbug confronting Sky Lynx backstage, this is the strongest opening to a Budiansky story in a good long time. Tellingly there's no wider toy pushing agenda here, he's doing exactly what he likes and is clearly having great fun just going a bit nuts.

On art, Frank Springer fills in to help Delbo recover from Totalled!, and generally does a solid job helped by the small cast of Transformers meaning there's little chance for the eccentricities of his Headmasters work to show. Though he does have a good go of it with Prime's flashback holograms, as he randomly has a generic character seen on Cybertron in the first issue attacking some humans whilst wearing Megatron's fusion cannon. 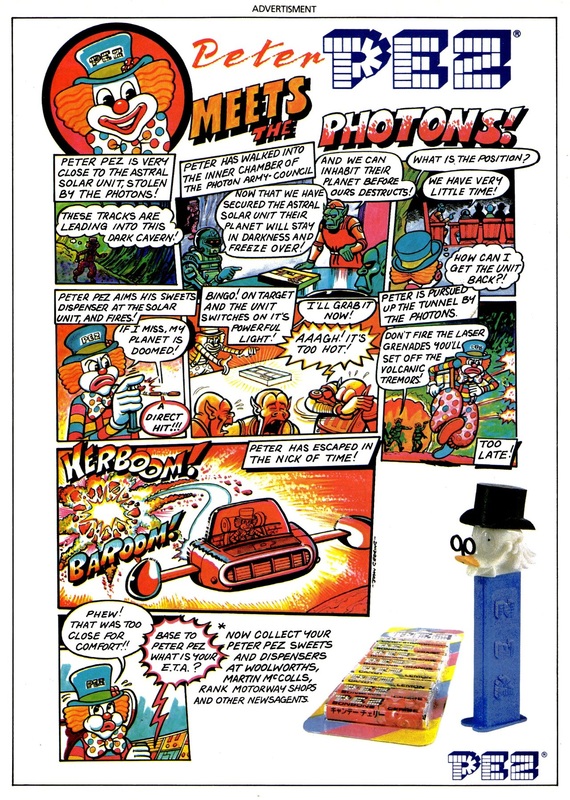 By "Meet" we mean "Fuck over"
Transformation seems to be taking the piss by opening with the claim "many" readers have been asking what happened to Sky Lynx. Do I sense a dig at how long Bob has been dragging things out? Unusually the sidebar is given over to saying goodbye to Marvel staff designer John Tomlinson who worked on the book from issues 22 to 120 and is now going freelance. Rather cheekily (though with tongue firmly in cheek) this is primarily used as an excuse to promote the redesign coming in issue 183 that will chuck out the look he created for the comic.

There's much excitement to be had from a competition for The Return of Optimus Prime on video that requires you to identify Transformers from parts of their bodies, meaning the comic gets almost instant double duty from Robin Smith's Powermaster Prime profile art. Naughtily the competition backs up the lie of the VHS cover and claims will let you "See the video début of the all-new Optimus Prime--Powermaster in the comfort of your own home". Unless they literally mean "You can look at the cover" this is completely untrue.

It's a quiet week for Grimgrams, with only Grimlock confirming to Andrew Dornan of Fareham that G.I. Joe: European Missions and Action Force Monthly are the same comic being of any interest. Though I'm as puzzled as Grimlock as to why Hashim Yilmaz of Ilford is writing in to moan about the sudden end of Inhumanoids this long after the fact.

Action Force starts a new story in Launch Base. Whilst the main plot regarding Serpentor setting up the sale of Terrordrome's to tin pot dictators will be long running, it's the combination of Snake Eyes, Scarlett and the Baroness (in a fly over) paying tribute to Destro (who, along with Cobra Commander, is of course alive and buried) at the remains of the Pit which stand out.

Combat Colin meets Bigfoot's--or Roger as he prefers to be called--family. Including a worryingly sexy wife who distracts from the message about humans being the real danger to the environment.

There are two bonus one page comics this week. The first is another in the series of promotional pieces for Marvel comics, this time for The Real Ghostbusters, with what looks to be our first glimpse of Andrew Wildman art.

The more important though is another Peter Pez Clown Policeman in SPACE adventure. Obviously this is very appropriate for this issue, and it seems to wrap up his ongoing battle with the evil Photons as he brutally kills all of them in a massive explosion.

Next week, it's the 200th Transformation. Party on dudes! 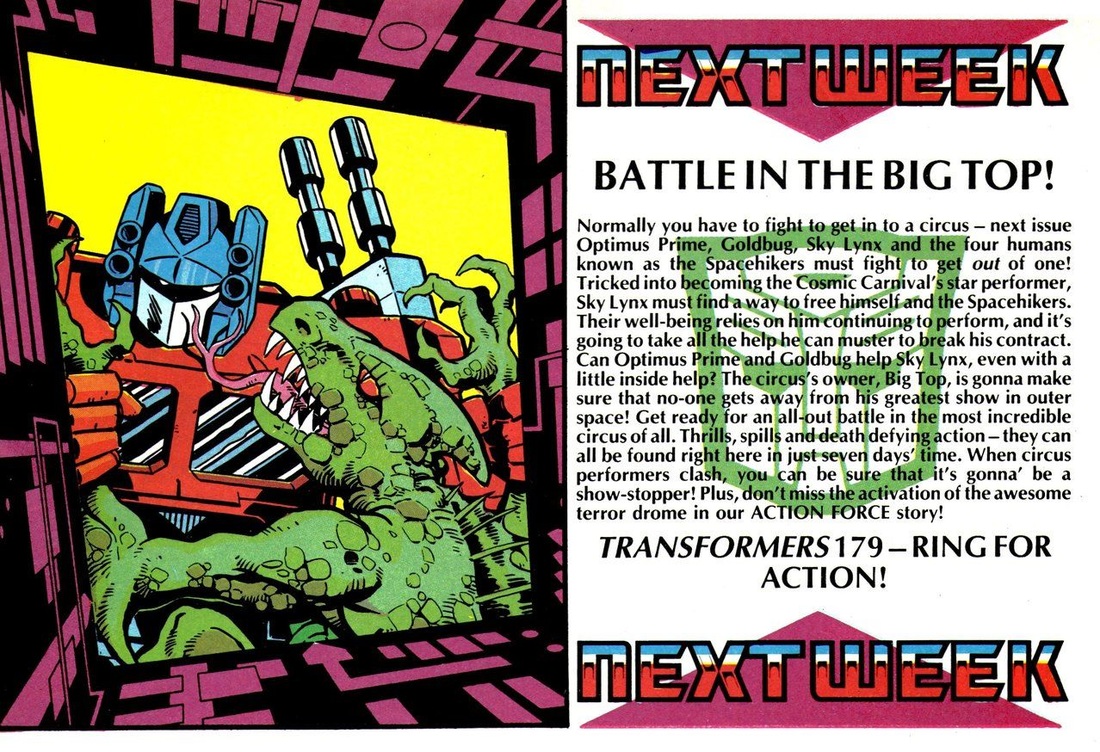