Can You Meet Me Halfway? 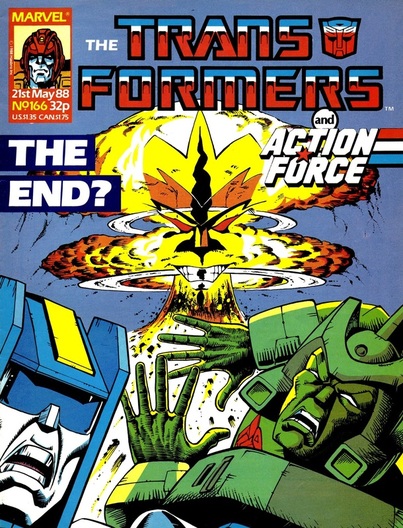 None of them have come close to realising the scope of my plan. But how could they?

We're in a strange position this week. I've covered milestone issues before, but they've known they're a milestone, be it a big issue number or a major toy push the comic has screamed and shouted about weeks like this. Here though, we reach a moment the title couldn't possibly have known was going to be significant. 166 issues down, 166 to go. This is the exact moment the series switches from having more issues behind it than it does ahead, we're effectively now on a countdown to cancellation.

Of course, the creative team couldn't have predicted that, indeed with the popularity of Transformers on the downward curve it's unlikely any of them would have expected the book to still have enough life in it to double its issue tally. The cover tagline declares "The End?", and that's what begins here. But this old dog has more life left in it than anyone would have thought.

The story within actually makes for an appropriate way of marking the halfway point as it makes connections to events that go all the way back to the opening of the first issue. It also opens with a visceral bang unlike anything we've yet seen attempted on the book.

This second act of the arc skips back in time three weeks, via the plot device of our unknown villain (seen only in a close up of his eyes) gloating over the ineptitude of Ultra Magnus on the surface and Emirate Xaaron in a cell. Loud talking to yourself is going to be a thing for this character, but that's something we'll talk more about next week. His musings lead him to thinking back on how it all began..

With a massive nuclear explosion.

"Mike Costa?!"
It's fair to say that anyone making a British comic in 1988 with a futuristic city being ripped apart by a nuclear detonation can't help but be influenced by the iconic Judge Dredd story The Apocalypse War. It's a comparison Furman and Jeff Anderson come off most favourably in, with only the initial splash page having an explosive sound effect on it the rest of the sequence is mute horror as buildings and robots get ripped apart by fire and the aftershock. The most harrowing image isn't even of death, just of one survivor clutching his head in disbelief and shock as the mushroom cloud rises behind him. That moment in particular feels like it's channelling the BBC's famously brutal docudrama Threads and the entire page is pure nightmare fuel.

It also follows up on the revelation in the last two weeks that underneath the streets of Kalis are thousands of ancient corpses: Cybertron is a planet where the surface is clogged with its own dead. That’s the natural outcome of four million years of war, but it’s never been stated so starkly.

At Autobase an unnamed and never seen before technician (I hope he’ll have a long and happy life in the comic) explains the explosion was the result of a massive nuclear reactor venting and hitting some kind of gas pocket. The villain’s doomsday machine being revealed by an explosion/fire during a test?  That’s just one of several ways this story will wind up feeling like a second, more refined, draft of the Galvatron and the Volcano arc. Indeed, it’s a shame the close up of the villain’s eyes with their distinctive red and orange colour scheme make it clear this is a new character as it would otherwise be likely the reader would just assume this was Galvatron again, making for a nice twist next week.

Exposition Xaaron then bring back something I doubt even the most attentive of readers would have expected to ever see mentioned again: Megatron’s plan to turn Cybertron into a mobile battle station as mentioned exactly once back in issue 1. On the surface it’s a strange thing for Furman to revisit, though I suspect as someone who grew up in the 70’s he has a great fondness for Daleks: Invasion Earth 2150 in which the titular villains plan to do just that to Earth (he’d also have been writing for Doctor Who Magazine around the time the Tractators were planning to do the same thing to Frontios in the TV show). Whatever the reason for the idea catching his fancy the notion of a “War World”—in various scales—is one he’ll revisit a lot over the years and indeed might well explain his ongoing interest in Unicron. 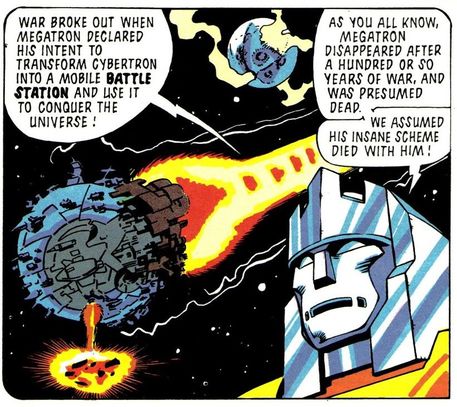 Everything we know about Pluto has been turned on its head.
Despite taking up less than a page it’s a nice sequence exploring the history of the book, and though it could be argued the back-story given to Megatron as a political agitator who rose up in the Decepticon ranks doesn’t quite fit with what was presented back in issue 1, it’s still nice to see a bit of extra depth given to the Decepticon.  The long and the short of it though is that Megatron’s plan required a massive nuclear reactor, which is clearly still there and going wrong, so it’s up to the Wreckers to find it.

This is a task they completely fail in and that leads us to the main character thread of this issue: Springer’s feelings of inadequacy at having replaced Impactor. Though he’s featured in a couple of stories since his introduction, this is the first time Springer has received any close attention and it nicely sets up the tormented by the ghosts of past mentors personality he’ll display throughout the comics right up to the IDW era.

It’s a fantastic bit of psychological writing from Furman, it’s clear that Springer is actually perfectly capable as Wrecker leader, but is consumed by the imagined perfection of the predecessor he hardly knew (and it’s obvious that Impactor did make mistakes despite what Springer claims, after all, Volcano went tits up). What’s especially interesting is that Springer feels guilt over nearly executing Optimus Prime back in issue 99, even though that was very much a mistake of Magnus’ as a result of his own guilt over Impactor’s death. That’s not a contradiction, just a fascinating insight into how a character views events through their own filter rather than the more objective viewpoint we’re normally presented with. 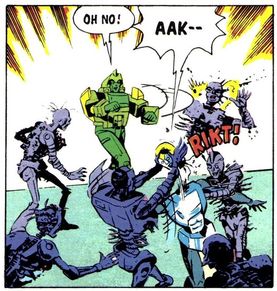 Oh no! Not Tech 1! or 2.
Of course, the real reason for all this introspection is to set up the cliff-hanger in a way that doesn’t make it obvious. As the technician and his equally new and unnamed friend Technician 2 (I hope he’ll make it through OK) find the location of the reactor—and as it’s just 100 feet below the base you do actually have to wonder how hard the Wreckers were looking—causing a massive zombie attack.

Springer actually does fall apart here as Twin Twist and a technician (it’s hard to tell which one) badger him for decisions, creating a moments indecision that actually causes the death of “Tech” (even Springer doesn’t know his name!) in a hilarious moment of black comedy as Springer tries to give him an order only to see he’s too busy having his head popped off by a zombie. To give him credit though, once Twin Twist almost immediately works out how the zombies are working Springer does figure out they need to jam the signal, he just doesn’t get the chance to implement the plan despite both Wreckers being quicker on the uptake than Springer and the Sparkler Mini-Bots (who obviously keep their brains in their vehicular modes).

Though Jeff Anderson isn’t as horrific an artist as Dan Reed, he does a solid job on the fight scene, with a particular highlight being the second technician getting to run away so he can die another day by letting Twin Twist take a huge chunk of machinery in the face meant for him. You go unnamed generic character! 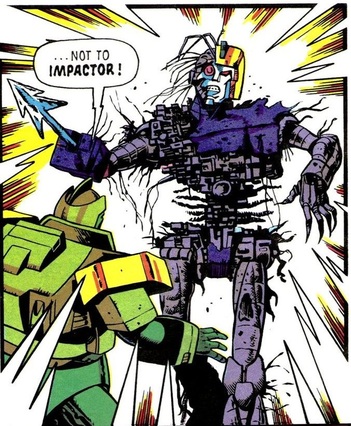 Better than his Generations toy.
The big cliff-hanger though would never be based around a Jumpstarter, instead Springer finally gets his shit fully together and goes to get Xaaron to safety... Only to be confronted by the zombie corpse of Impactor! It’s pure soap opera (you know, if soap operas were based around zombies), but it’s pulled off with a great deal of style and the Terminator-ish image of the barely (albeit more so than any of the other zombies) recognisable former Wrecker leader is rather wonderful.

This continues the strong run of this storyline, combining character, action, continuity and even some dark humour into a fantastic package topped by some good solid Anderson art. There could be no better way of celebrating the midpoint of the comic.

After an enthusiastic promotion of Dragon’s Claws last week, Transformation seems much less excited about the launch of Action Force Monthly despite the first issue containing a reprint of Ancient Relics as backup. It does seem a bit odd to launch an “American format” book with a very British three-story structure, which might suggest why it won’t last. However, as the title will be presented in America as G.I. Joe: European Missions, that makes Ancient Relics the second British Transformers story to get a stateside presentation. This time with its proper colours as well!

On the letters page Andrew Cartwright from Stoke-on-Trent shows he’s a true Gee-Waner as he complains we haven’t seen any of the original Transformers in ages and the book isn’t the same without them (though it’s not as if one of his examples of Sideswipe ever did anything), Grimlock assures him Ratchet has been working hard to fix the damaged troops and issue 175 will feature just about everyone in a big massive fight. 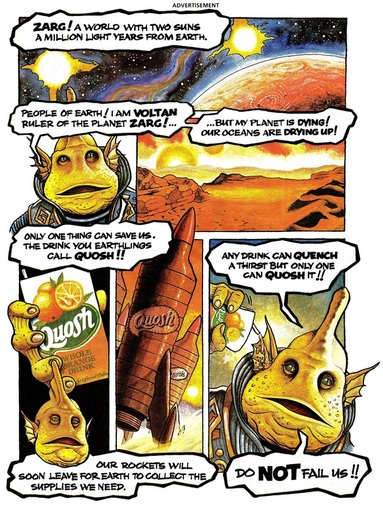 So...erm... Don't buy Quosh then? Let the aliens have it?
Meanwhile Barry Collard of Cambridge asks about the picture of a fancy new looking Optimus Prime and a little human jumping out of his chest on the back of Snap Trap’s box. This forces Grimlock to admit that issue 175 will also make it clear that Optimus may be back, possibly as a variation on the Headmasters theme. That’s the first solid bit of promotion for a forthcoming American issue the book has done in ages.

Action Force picks up on last week’s cliff-hanger in Thunder Machine, which is given over to introducing three new Dreadnoks. Zarana will be the one notable success, but we also meet Zander (Zartan’s brother. Has a hilarious skit of no one remembering him) and Thrasher (no noticeable personality). They plan to rescue Zartan from The Pit, allowing people to add to their Zarana wank bank as she cosplays as Lady Jaye and Scarlett. This opening is more notable however for that Real American Hero Sgt. Slaughter bemoaning civil rights and that he can’t just beat the living shit out of Zartan. He’s probably itching to go do some water boarding.

AtoZ covers Inferno and Ironhide whilst Combat Colin is eaten by the Loch Ness Monster and discovers it is a robot, which I suspect is a deliberate homage to an especially gloriously silly episode of The Saint.

Next week: Who is behind all this?

But first, in celebration of reaching the middle of the book, a look at the launch of Marvel UK’s series of American format books and Furman’s first crack at creating a property: Dragon’s Claws!

[As part of my serious pimping of reaching the middle of the book, I created various promotional images on Twitter which I’ve shared below. Marvel at my mad photoshop skills!] 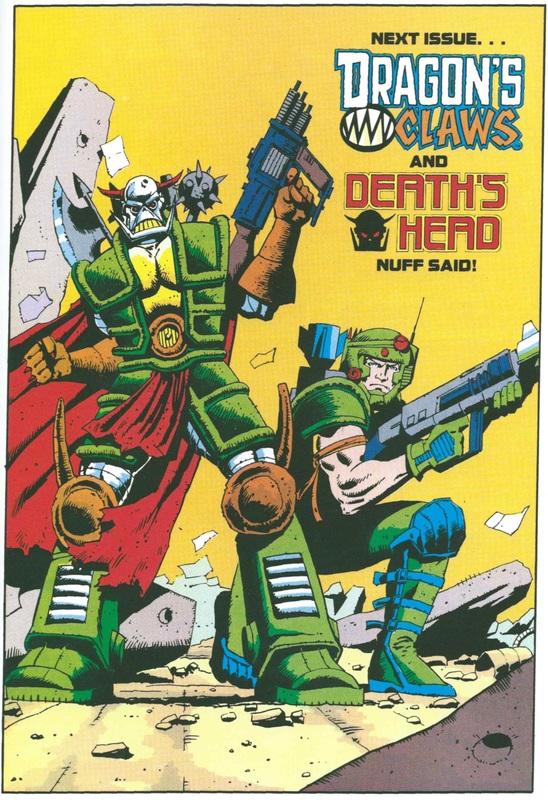 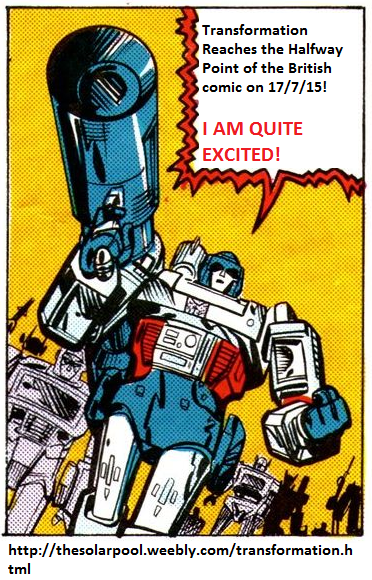 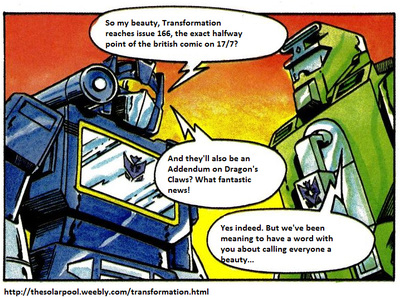 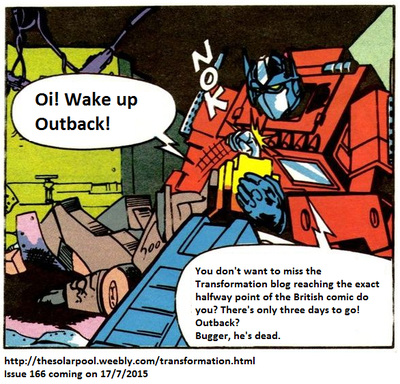 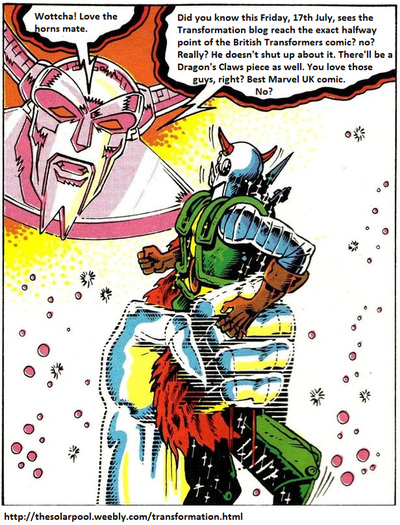 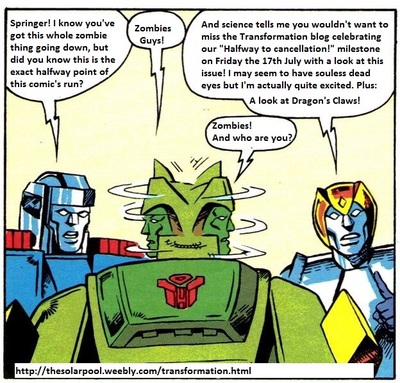