He Looks at This World and Wants it All. 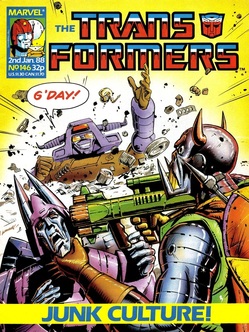 May all your programs be serials!

Happy 1988! Just about, if only for two days of the seven this issue was on sale. It is very much the start of a less heralded tradition than the Christmas issue, the New Year’s special. This is the first of three years in a row where the strip is actually set on a January 1st in the 21st century, and though the decorations aren’t as extreme as they were last week, the info box still has a unique piece of Geoff Senior art with Rodimus raising a toast to midnight.

Before we jump into the mysteriously titles story though, a bit of housekeeping from the 1987 specials. Andrew Turnbull has pointed out the changed ending to the Complete Works Part 2 uses Don Perlin art from one of the American issues, though he can’t recall now which one/s (there’s a challenge for the nerd army), and Tim Roll-Pickering has clarified that Jim Shooter wasn’t against the idea of dedicated reprint titles, just a regular series using old material as filler.

This week though, ???????????????????????????? (and yes, I will be calling it by the title it’s given by the Transformation page until I reach the reveal despite the fact you all know what’s coming. I even counted all 28 question marks) picks up on some old business left over from Headhunter, as Death’s Head’s pursuit of Cyclonus and Scourge leads then to the Planet of Junk. 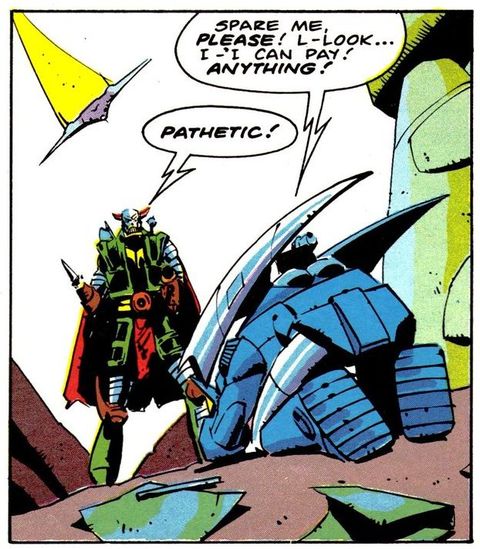 "I'm not worthy!"
This almost instantly shows up two of what should be fairly big problems with this issue and the story as a whole. The first is that this isn’t a Transformers story guest staring Death’s Head; it’s a Death’s Head story guest staring the Transformers. Unlike in his first issue this isn’t entirely down to itchy feet on Furman’s part, the Marvel UK shared Universe is coming and Death’s Head’s own comic is going to be a key part of it, even if the round the houses route to it means it won’t be the first to launch.

???????????????????????????? is effectively a backdoor pilot to Death’s Head, and over the course of its six issues he is front and centre as the lead character, getting all the beats and character moments that would normally go to a regular rather than a guest star, something that will be really notable in issue 150, but shows here when he surprises the surprise villain by being able to resist his mind control for longer than anyone else, like a true hero he is going to valiantly resist. It’s fair to say this is an odd way to celebrate 150 issues, and should in theory make for a very annoying story.

The second thing that should be a problem is that, in order to build up to the reveal of the villain, this is very much a prologue to the main story. Indeed, being built around a big action scene and ending with the reveal of the title it’s effectively Furman doing a Bondian pre-credits sequence. The problem being that Bond pre-credits, especially in this era (the previous summer’s The Living Daylights with its Smert' Shpionam assassination was the first Bond in over a decade where the opening had more than a token attempt to connect to the film that followed) are often unrelated to the main plot. That’s not a problem in two hours of screen-time, but it should hurt to devote one sixth of a story that has to do a hell of a lot to a side show.

So here almost the entire issue is given over to a fight between Death’s Head and his targets, an antagonism that will only come into play again thirty seconds before the end of the story. If they’d landed on The Planet of Junk (remember, the planet’s actual name isn’t used in the film, Furman’s main point of reference) on page one and then instantly fallen under the thrall of the Surprise Villain it wouldn’t have made a bit of difference to the actual story. 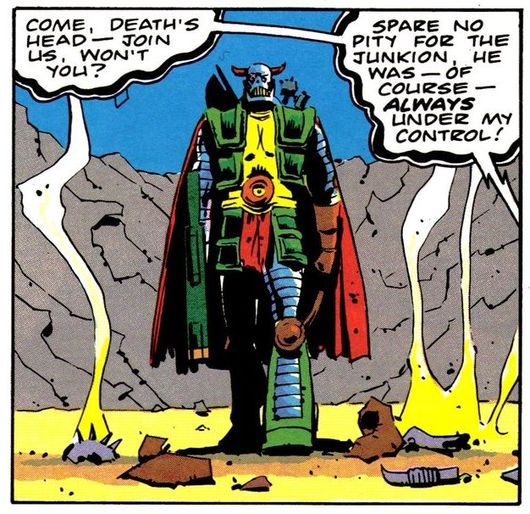 "I don't know what his name was, but now we call him Spot"
What we have here though, is an author and artist right on the top of their game. The prominence of his own creation in a big story for the title characters should be annoying or even egotistical, but Furman here makes every single moment brilliant. You don’t care Death’s Head has taken over the book because every line of his is memorable, and you don’t care that the issue before the big reveal is little more than a long fight because Geoff Senior makes it a bloody gorgeous fight.

Furman is also careful to make sure that if Cyclonus and Scourge are going to be supporting characters in their own book, that they’re at least well done supporting characters. They fare much better against Death’s Head here, and though his favoured character status means they don’t really make him break into a sweat it at least doesn’t go as easily for him as it did back in Wanted... There’s also a completely unintentional bit of foreshadowing in the sequence where it looks as if Cyclonus has abandoned Scourge to die, only for it to be bluff. An issue later in the year will reverse their positions and act as a dark mirror to this moment.

Things are interrupted by the arrival of a Junkion asking for help taking care of someone that has taken over The Planet of Junk and mesmerised his fellows. Death’s Head is persuaded by the offer of big wads of cash, but we cut away from the Junkion (unnamed, but he’s one of the all purpose designs from the film) before he can clarify what’s going on so as preserve a sense of mystery and excitement until the last page.

The cutaway is to Cybertron and is merely to establish Wreck-Gar is going home thanks to a lift from Smokescreen and Inferno. Despite its brevity what’s lovely about this is the genuine sense of friendship between Rodimus and Wreck-Gar, in just a few lines they come over as old pals with a lot of history, something that’s going to be important in order for Prime’s pissy attitude later in the story to make sense.

Then we’re back to the Planet of Junk, and whatever the Junkion told Death’s Head during the page on Cybertron has convinced him to keep Cyclonus and Scourge alive to help, even if he has no intention of keeping his promise of letting them live for doing so (the minor issue of Death’s Head being a killer for hire who never manages to kill his actual target is going to be dealt with spectacularly next week) leading to a desperate raid on the Surprise villain that ends with the reveal he was really controlling the Junkion and all that has gone before was just shits and giggles on his part.

Iron Man's back, but not for long...
This results in the final page of the issue and the reveal of the title (a trick nicked, according to Furman, from the Spider-Man issue where Gwen Stacey died), The Legacy of Unicron! It’s masterfully done, with the full page reveal of Unicron’s head on the Planet of Junk being rebuilt from the neck down is fantastic and completely changes the tone. Suddenly the reader knows this is going to be a much bigger story than it at first appeared and things are really going to kick-off next week.

Well, those who hadn’t read Grimgrams last week. Still, despite all the potential pitfalls in how this story is set up, this is an exceptionally good issue and shows Furman can pretty much turn anything into gold when he’s on form.

As well as building up a sense of mystery over what the story is called Transformation teases the stories we’ve got coming in 1988, including the return of a major character. I wonder who that could be. We’re also promised Iron Man for at least the next 8 weeks, but this will turn out not to be the case.

A sign of what is going to come in seven weeks comes on Grimgrams, where he’s very coy when Nkomo Armstrong of London asks if we’ll be getting another Action Force crossover. It seems that at this stage exactly what form the merger will take hasn’t been firmly decided upon yet.

Still, for now at least, Iron Man has returned to the backup, with a reprint of Stratosfire from his 1987 Annual, a surprisingly fast appearance for the story in the UK as it was only published towards the end of the previous year. It’s a nice choice for Transformers as Professor Morris’ old employers Roxxon have their own superhero to use as a PR stunt, the unlikely name titular character. We get a nice scene of her turning up to help Iron Man rescue motorists on a collapsing bridge in San Francisco (and the story is very pleased with itself for not going with the Golden Gate) and him being subsequently annoyed with her stealing his thunder and him taking it out on his staff.

AtoZ covers Gears (remember Gears? Spider-Man’s mate? How the mighty have fallen) and Grapple, whilst Robo-Capers is a new year’s special where King Nonose’s resolution to conquer Earth is almost immediately undone by him still having useless robots.

Right in the middle of writing this (which I’ve had to do in one big spurt due to illness earlier in the week) I’ve learnt of the death of two times Transformers film guest star and Three Men and a Baby director Leonard Nimoy. You may also know him as the most iconic character in the most iconic American television show of the twentieth century. Tonight I will be watching me the one where Spock goes nuts.

Next week, it’s the last UK art by Geoff Senior in the colour era; will he go out with a shock? 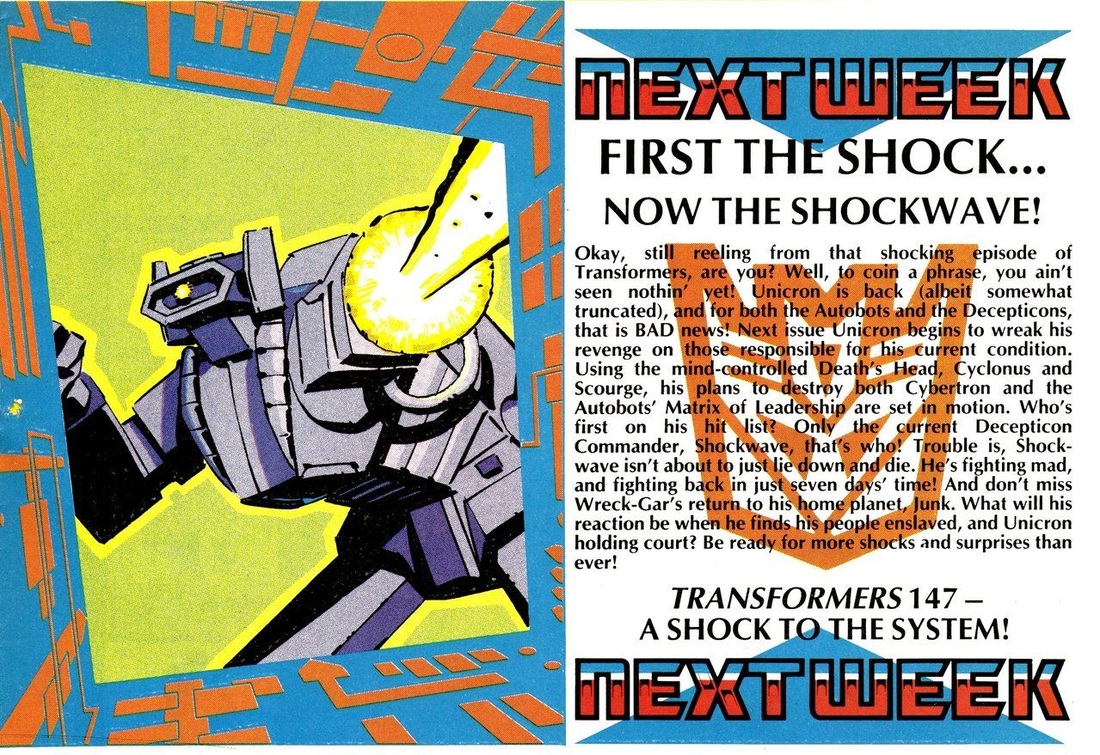