I Remember It Well. 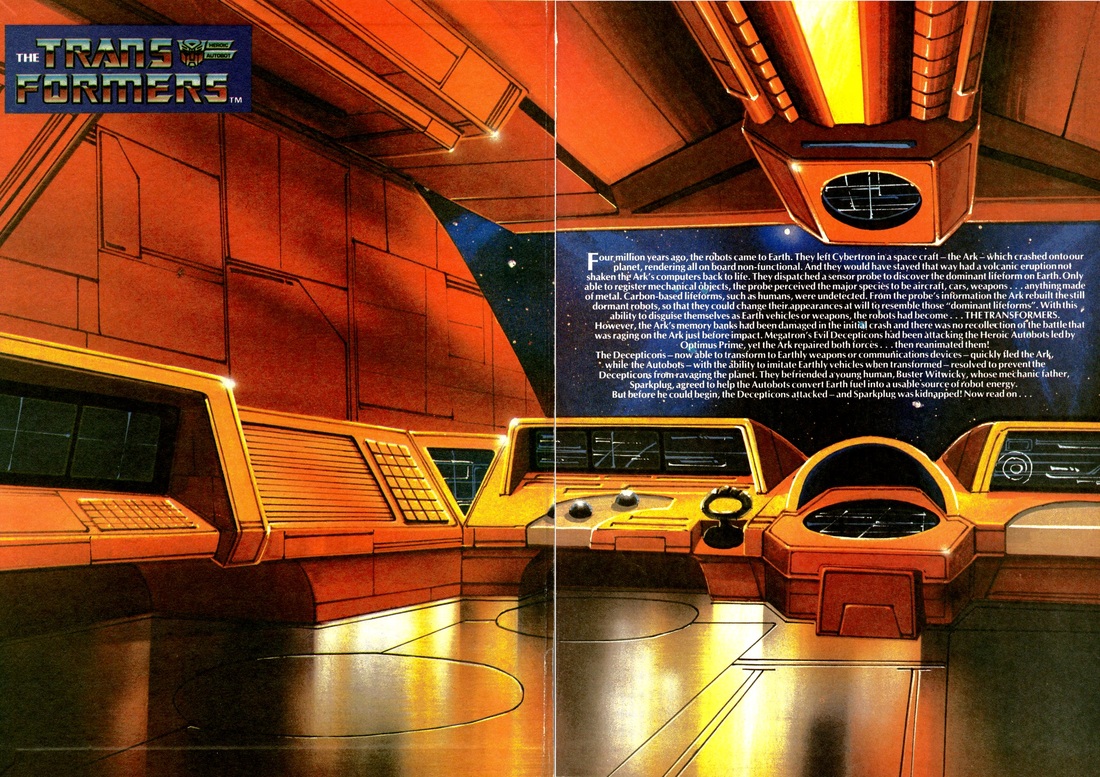 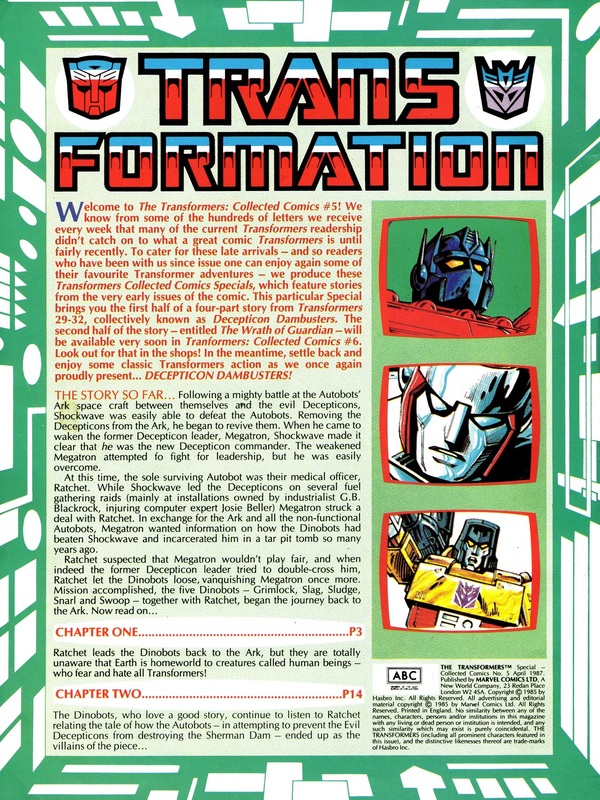 The introductory page to Collected Comics 5.

Collected Comics 6: The Wrath of Grimlock!

The Transformers issues 33 and 34.

One of these classic adventures has got to be Dinobot Hunt! Maybe it’s not the most popular, but it’s certainly the one readers write in the most to say they’d like reprinted.

The 1987 Collected Comics represent a major change in approach to the specials that might not seem obvious now we know how random some of the future choices for reprinting will be, but must have actually be quite surprising to readers paying attention at the time. The first four specials have followed a simple pattern of reprinting the series in order, from issue 5 we suddenly switch to jumping about the timeline, in theory to only represent the best of the book but ultimately often being a case of just grabbing whatever came to hand as the series went on (especially when the main book started doing reprints of its own). 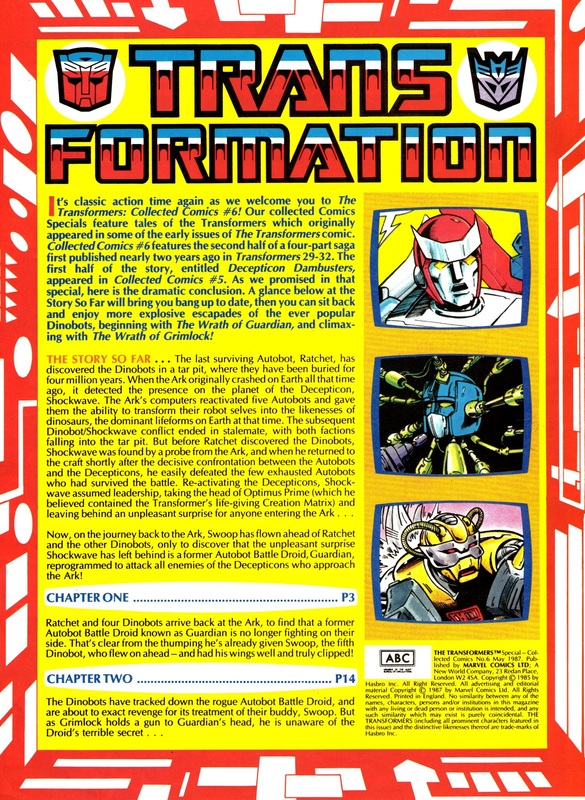 Recap page for Collected Comics 6.
It’s likely the American stories were never under serious consideration for the Specials after the initial representing of the mini-series, showing off the best of the local talent would have always been the preference. What is notable is the skipping of The Icarus Theory. The avoidance of Raiders of the Last Ark makes sense in hindsight as Furman isn’t proud of it and actively blocked its reprinting when editing the Titan books (as was pointed out in the comments at the time, Marvel UK having changed how they do colouring might have made it difficult to colour the black and white pages in a way that matched those that had been done originally as well), but Icarus is a good story he doesn’t seem to have any issues with that would have perfectly fitted a special and nicely filled the gap between those devoted to Decepticon Dam-Busters and the Wrath two parter.

The interesting thing about the first two specials of the year is that they’re presented by their Transformation pages as one four part story split across two issues. This isn’t strictly the case, but it’s a sneaky way of encouraging kids to buy both (fun fact: The Transformation page of Collected Comics 5 promotes the following issue under the umbrella title of Wrath of Guardian, whilst the cover of issue 6 makes it the more appealing to kids Wrath of Grimlock. Well OK, not that interesting). The only real change from the originals is the correction of some minor errors (“Boulder Dam” and a bit of colouring) and the removal of the “NEXT” boxes from issues 6 and 7.

The final special of the year is something of an oddity, being the biggest Collected Comics of British material Marvel UK ever did. The “Spine” collections of the mini-series and the Movie adaptation were of a similar size, but they’d never attempt the same again with a “Staple” issue. Presumably the 20 pence price raise affected sales (especially without the more prestigious “Proper” book format those earlier reprints had) even with a reused cover and in future there wouldn’t be more than three regular issues in any of the Specials, with longer stories being split up between multiple issues. 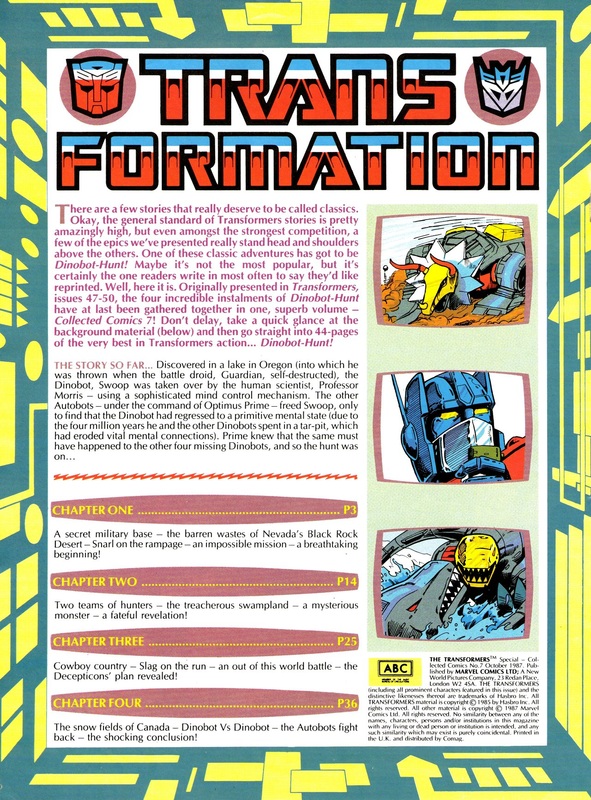 The recap page for... oh, you guessed.
1987 also saw the end of the horribly mis-titled Complete Works, how realistic they were about reprinting every single story in an Annual format is hard to say, though obviously if sales had been strong enough they’d have carried on beyond what seems to be the minimal plan of getting the miniseries out there in a more durable format.

This reprint of the concluding half of the opening storyline is most notable for the changed ending that removes the arrival of Shockwave and lets Prime complete his victory speech. There’s been much speculation over the years as to where this came from, with many people wondering if it was an alternate ending to the American issue 4 made at the time in case the book wasn’t turned into an ongoing.


Despite the lettering being a perfect match, the art isn’t a perfect fit for Springer-though your guess is as good as mine as to who it might be- and the fact the fourth issue actively sets up the fifth (and all the stuff about the Dinobots and the Savage Land is left in here) makes it likely the team already knew the series was continuing when the issue was being written.

Plus, as we'll see when the James Roberts and Special Guest interview goes up, the Australian version had a different changed ending suggesting these were both done locally rather than Marvel US providing a "Closed" version as part of the package.

One less exciting change, and an ironic one considering that they were removed from the Collected Comics, is that Prisoner of War! now has a “NEXT” box. This time around the endpieces are a diorama of the Autobot shuttle from Transformers: The Movie that looks as if it might actually be a production sketch from the film.

I do love the slightly random choice of cover reuse as well; obviously they felt none of those from the original printing were striking enough so we get a nice mad Megatron from issue 56. Plus thanks to the pencil scribbling of a loving relative, I know my copy was a Christmas present for some guy named Jonathan with a brother called Ralph (though what the writer is encouraging Jonathan to do to Ralph is hard to make out, hopefully something nice). 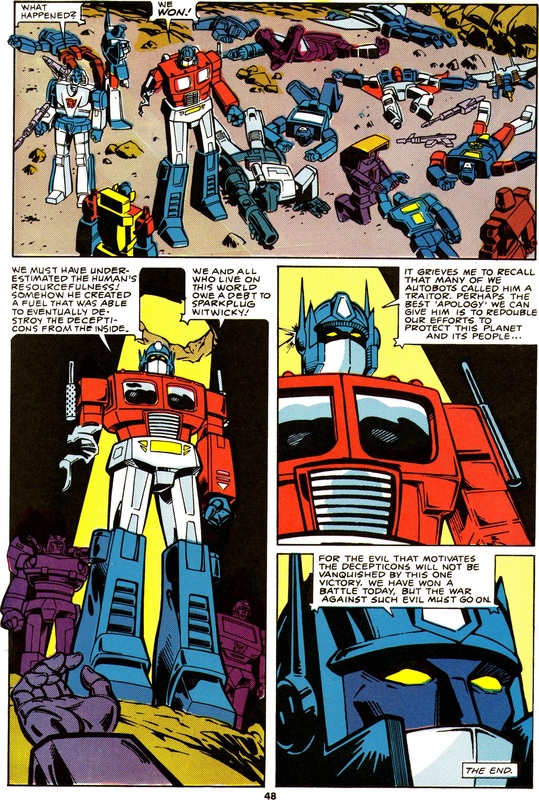 The famous changed ending.
At this point I should mention the American comic’s reuse of Man of Iron. I no longer have the issues (though at one point they were easier to get hold of than the British equivalents thanks to the lack of reprints), but the main thing that stood out about them was the horrible, horrible colouring that really showed up how poor Nel Yomtov was at his job. In the interview with him in the final American issue Nel is at great pains to point out he did this despite the original British credits being retained, if I were him I’d have denied all knowledge.

The attempt to promote the Britishness of the stories is rather sweet as well, there’s not only a “Tally ho!” style introduction added to the top of the first page explaining where the story fits in continuity (Basically: Ages ago, don’t worry) but the Union Jack is added behind Grimlock on issue 33. Sadly none of the covers online are of the version I had (direct edition?) which went as far as adding Shakespeare in place of the barcode.

As I talked about when discussing Child’s Play, the real impact of this reprint would have been on contemporary American readers, the difference in tone, style and maturity to the work Uncle Bob was putting out at this time must have been as shocking as watching Mike Tyson punch a kitten. The covers are pleasingly mad as well, with the recoloured Megatron standing in for the Man of Iron on the front of 33 being just wonderful in every way.

That would however be the last time British stories would be seen in the States (bar Ancient Relics popping up in G.I. Joe: European Missions), despite the fact that there would seem to be an obvious means of making money from old rope by putting out a series of UK based spinoff issues, after all, a Headmasters ongoing was at least semi-seriously considered around this time so a run that wouldn’t have cost them anything and could have done things like promoting the movie toys would almost seem the obvious step, something akin to Marvel US’ reprints of Doctor Who Weekly stories.

However, and thanks to Tim Roll-Pickering for pointing this out a few weeks ago, one of the mandates Jim Shooter run Marvel with during his time as editor in chief was no reprints. Sadly Man of Iron ensured he failed at this at the last hurdle in his last month in charge, though presumably the attitude stayed in place with his successors.

With 1987 now done and dusted, the big question is what big shocking surprise awaits us next Friday? No one can possibly guess (unless they’ve read the letter’s page to issue 145).

And with the end of another year, it’s time to thank all my readers again. As well as the weekly in 1988 you can look forward to the James Roberts interview (honest! I am not a mental making it up), Five Faces of Darkness and its alternate take on the Transformers origin and the long delayed Transformers Universe. So stay tuned! 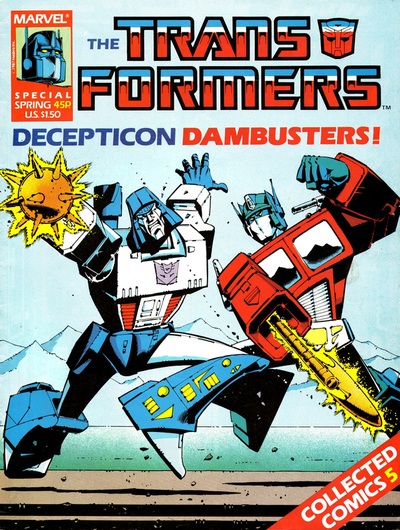 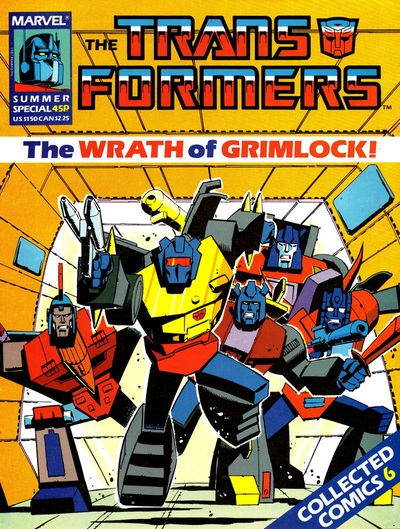 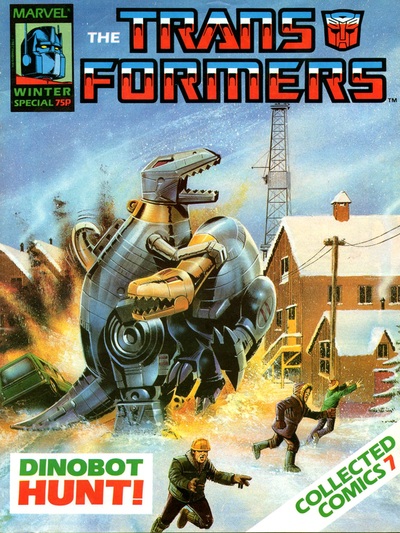 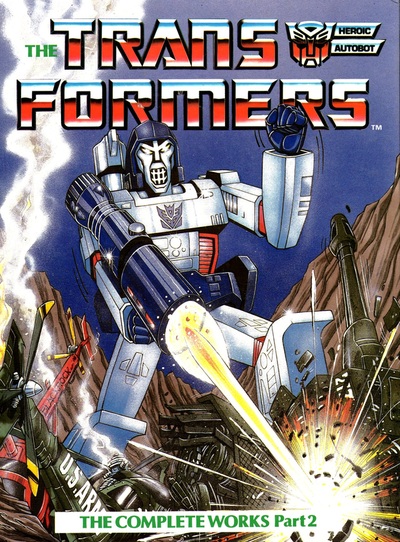 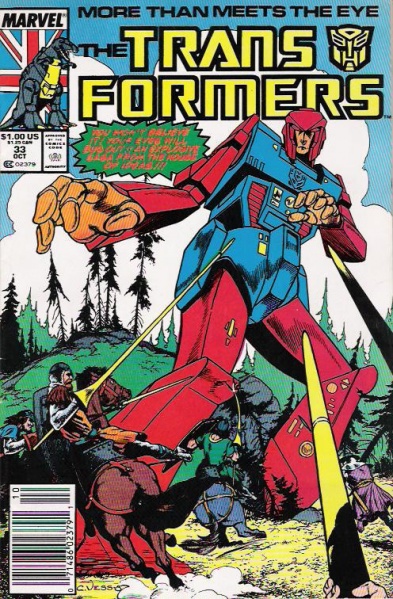 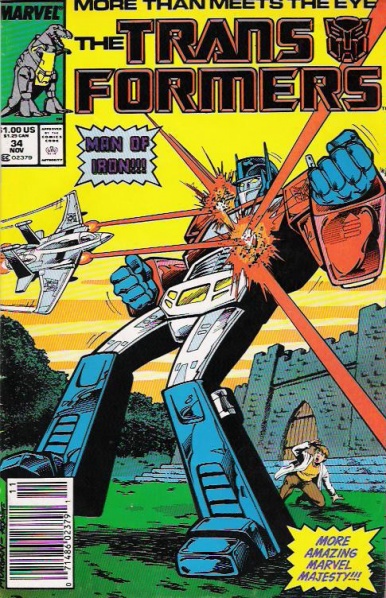 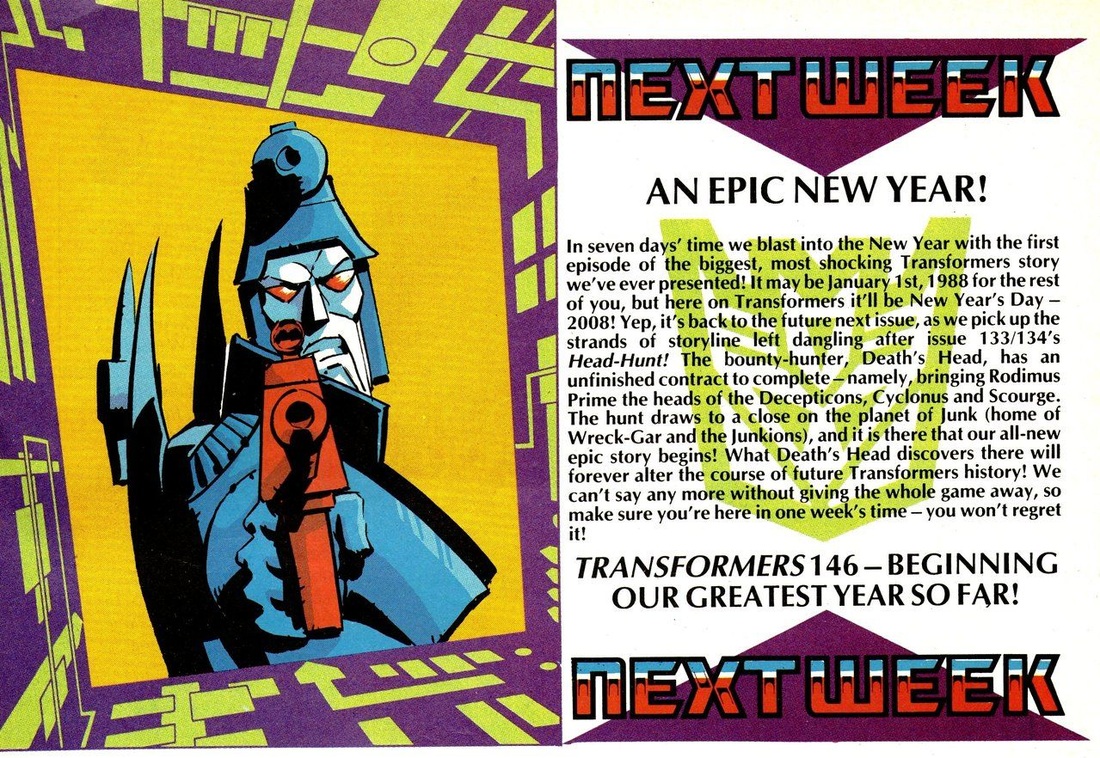